This website requires certain cookies to work and uses other cookies to help you have the best experience. By visiting this website, certain cookies have already been set, which you may delete and block. By closing this message or continuing to use our site, you agree to the use of cookies. Visit our updated privacy and cookie policy to learn more.
Home » Energy Implications of Chilled Water Plant Design and Operation
Commercial HVACCooling & ChillersPumps & Flow Controls

Many decisions are made during the design of a chilled water plant that have long-lasting impacts on the facility’s energy use and demand. Additionally, consistent operations, benchmarking, and submetering can help perpetuate savings throughout a building’s life cycle.

Chiller plants are commonly a building’s most costly upfront expense and often are one of the largest end uses of energy in a building. Given rising energy costs and demand prices, the impact of chiller plants on overall building performance and operations budgets has increased as well. Therefore, it’s important that chiller plants run efficiently to minimize the operational costs to the owner. Over time, the code requirements of ASHRAE 90.1, “Energy Standard for Buildings Except Low-Rise Residential Buildings,” for chillers have increased drastically, which is a great step in the industry’s move toward sustainability. For example, the full-load coefficient of performance (COP) of a 500-ton centrifugal machine has increased from 3.8 in the 1975 code to 6.28 in the 2016 code. Although technology has improved and manufacturers have achieved higher equipment efficiencies, efficient system design and operation continues to be important for the long-term efficiency of the building. 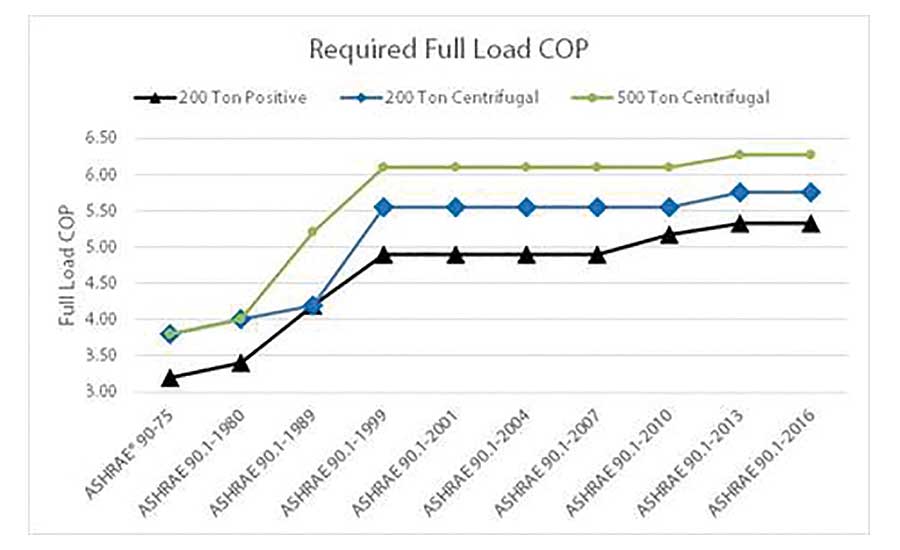 Chiller efficiency has been expressed in multiple ways throughout the years: Nominal kW/ton, integrated part load value (IPLV), non-standard part load value (NPLV), and COP are all metrics of performance used to evaluate chiller options. Chillers spend most of their time at part load, which is why the IPLV metric is so useful. IPLV is a great way to choose between chillers operating under the same conditions, as the definition of this metric makes assumptions that the chiller will spend “x” percentage of its ton-hours at “y” percentage of its peak capacity and defines the entering condenser water temperature for each condition. This definition forces all manufacturers onto a level playing field. One caveat of solely using this method is, of course, that the building may not have the same load profile as the percentages in the IPLV definition. In these cases, NPLV can be used, which is essentially the same calculation with different “customized” percentages determined by the actual load profile of the building. Another caveat is that of a chiller plant with multiple chillers — three, four, or even more — in which the IPLV curve does not fit. For example, the third chiller to turn on in a three-chiller plant will almost always operate at two-thirds load or more (otherwise, it would remain off).

There are varying levels of detail involved with the calculation methods above. However, in general, the overall strategy is to maximize the number of hours the chiller spends at part load, as this is typically when the chiller is at its highest efficiency. Chilled water pumps should be variable speed to match the load in the building. Cooling tower fans should operate to optimize the condenser inlet temperature seen by the chiller to further maximize the chiller efficiency. Commonly, this involves running the tower fans at high speeds, but this higher tower fan energy use is overcome by the chiller’s efficiency.

These are general rules of thumb, though they may not work in every situation. Therefore, the role of the plant operator is very important for ensuring the plant is running as efficiently as possible. Given the advanced controls and submetering technology available today, it should be feasible that the energy use for the various components within a plant (chillers, pumps, towers) be provided at the building automation system (BAS) console. The ideal situation is for operators to see the kW/ton of the entire plant at any given instant through the BAS. This real-time feedback gives the operator another tool to run the plant effectively.

In addition to real-time monitoring, there are many avenues to ensure energy-efficient design and operation, a couple of which are explored here:

This operational strategy is getting more attention with the added load to the grid due to higher peak temperatures. The U.S. Green Building Council (USGBC), which develops the Leadership in Energy and Environmental Design (LEED) certification program, is taking notice that demand response can increase grid reliability and reduce greenhouse gas emissions. The latest versions of LEED v4 and v4.1 include a credit for participating in an existing demand response program through the utility (2 points) or providing the infrastructure in the building to participate in a demand response program in the future (1 point)2. By reducing the peak demand, the owner can save on his or her monthly electricity costs charged for the $/kW portion of their bill.

Now that we’ve explored ways to achieve efficiency, the question becomes, “How do we perpetuate these savings throughout the life cycle of a building?”

The best way to measure how efficiently the building is operating is through benchmarking. Benchmarking is the process of tracking annual usage and costs related to energy on a square-foot basis and comparing these metrics to similar buildings. The most common benchmarking metrics are Energy Usage Intensity (EUI), measured in kBtu/sf/year, and Energy Cost Index (ECI), measured in $/sf/year. The “benchmark building” is established as a building in the same climate zone of similar function type, occupancy, and size. Databases of energy usage and costs, such as Energy Star or the Building Performance Database from the U.S. Department of Energy (DOE) and Lawrence Berkeley National Laboratory, are available.

Benchmarking is common practice for many building owners and is sometimes required by local laws. For example, the city of St. Louis requires buildings that are 50,000 square feet and larger to be benchmarked, and the energy and water use must be reported annually. Chicago has a similar ordinance and also authorizes the city to make individual building data readily available to the public. While the public databases for benchmarking data do not include energy related to chilled water plants separated out from the whole-building data, this is still a good place to start for monitoring their building performance. This same strategy can be applied in the case of submetering. If the chilled water plant was to be submetered, this data can be trended over time to observe changes in operations or efficiency.

Another strategy to ensure savings throughout the operation of the building is metering. Most large buildings have submeters for various systems throughout the building, which are commonly separated by electrical panelboard. Monitoring energy usage with submeters is a great way to determine the biggest energy end uses in the building. It’s useful to place submeters on the large mechanical equipment, such as chillers, cooling towers, and pumps. ASHRAE offers recommendations in Guideline 22-2012, “Instrumentation for Monitoring Central Chilled-Water Plant Efficiency,” for monitoring and tracking chiller plant power consumption in real time. This guideline includes recommendations for methods and devices used to measure electrical usage, fluid flow, and temperature as well as how to calculate system efficiency. Once the proper submetering is in place, the operator can test various methods of operation to see what happens to the power consumption. For example, running more chillers at a lower load will have different results for the total system power usage versus running fewer chillers at a higher load. With submetering, the operator does not have to guess, since the real-time submeter data shows which method uses less energy.

This strategy is also being recognized by LEED as a useful tool for perpetuating energy savings. LEED v4 BD+C includes a 1-point credit for Advanced Energy Metering, which calls for the metering of end uses that makeup 10% or more of the building’s total energy use. For this credit to be achieved during the design of the building, an energy model must be created to simulate the energy use of all components over the 8,760 hours of the year. This process helps determine which end uses are causing the largest usage and guides the decision of where to place submeters. Once the building is operational, the submeters help operators and energy managers see the results of the everyday operations in the building.

While all of the above might sound great in theory, a team of people has to make it all happen. For a high-performing building, a couple of individuals have key roles.

Chiller plants are one of the most complicated parts of a building that can make or break the success for energy savings in a project. An experienced design team is critical to evaluate chilled water plant design options and make recommendations to an owner. Through design, construction, and operations, it’s truly a team effort to sustain the projected energy efficiency throughout the life cycle of a building.

A Holistic Approach to Upgrading a Chilled Water Plant

Debunking Myths of Active Chilled Beams: What You Thought You Knew — But Were Wrong, Part 2

Debunking Myths of Active Chilled Beams: What You Thought You Knew But Were Wrong, Part 1