Phasing, harmonics, and controls are just a few of the design items that need to be considered early in the design process.

Upgrading a chiller plant can be one of the most exciting projects for an engineer to work on, specifically when the plant needs to be kept fully operational during the construction process. Figure 1 shows the layout of a typical chilled water plant that is near the end of its useful life. Figures 2 and 3 show the piping system diagram: The plant is comprised of three water-cooled chillers, each sized for approximately 30% of the load, and arranged in a primary-secondary configuration. Three equally sized constant-speed and constant-flow towers are used to cool the condenser water. As shown in Figure 1, a motor control center (MCC) is used to deliver and control power to the central plant equipment and other ancillary loads. It is not unusual for older central plants to be provided with an MCC; one of the main reasons for this approach was the lack of variable frequency drives (VFDs) to control motor loads. An MCC is comprised of multiple “buckets,” with each bucket representing an assembly of a circuit breaker, motor starter, and a means to disconnect power to a load. 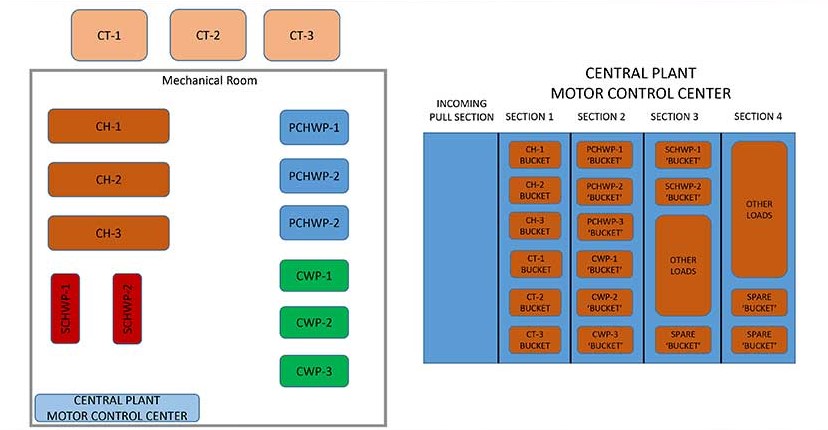 Assuming the plant equipment needs to be replaced “in kind,” i.e., with new equipment of similar capacity, one of the first tasks that needs to be completed by the design team and the client is to decide the electrical design approach for the new equipment; this will decide what type of electrical features the new chillers will need to be provided with. For example, the majority of the pumps serving a chilled water plant could be provided with VFDs, even if the pumps are meant to operate as constant-speed (i.e., condenser water pumps). This is because VFDs can serve multiple purposes, in that they: 1) aid in balancing the water flow thru the plant; 2) act as a motor starter; and 3) act as means of disconnecting power to a load (when provided with integral disconnect switches). Lastly, but not any less important, the majority of new water-cooled chillers are provided with at least one VFD. Similar to a pump VFD, a chiller VFD is also a motor starter.

It is important to note that when upgrading from magnetic starters to VFDs, the harmonics created by the VFD should be considered. Harmonics are produced by nonlinear loads. A nonlinear load contains an input section (AC-DC converter or rectifier) that converts the AC voltage wave to a DC voltage. A VFD is a nonlinear load and performs two actions on the input line voltage received from the upstream motor control center, distribution panel, or switchboard. The first action converts (rectifies) the input AC voltage wave into a DC signal (AC-DC). The second action inverts the DC signal back into an AC signal (DC-AC) set at the voltage and frequency corresponding to the required fan or pump revolutions per minute (RPM). Harmonics are produced during the first action (AC-DC) by the high-speed switching action of the active semi-conductor components (typically SCRs) located in the input (rectifier) section of the VFD.

A harmonic is an integral multiple of the fundamental frequency of 60 Hz. Only odd multiple harmonics (3rd, 5th, 7th, etc.) are produced by the AC-DC conversion. For example, a third-order harmonic is a sine wave oscillating at a frequency of 180 Hz (three times 60 Hz). Harmonics, if not mitigated, will degrade the power quality of the facilities distribution system and can negatively affect connected loads. The negative effects of harmonics increase with an increase of nonlinear loads as a percentage of the facilities total load. When a facility's nonlinear load is less than about 20% of the total load, harmonic content may not be a concern.

The amount of harmonic content measured or calculated at a customer’s power service point is recommended by Institute of Electrical and Electronics Engineers (IEEE) 519 – 2014 to be a maximum of 5%. IEEE 519 describes harmonics in detail and provides calculation procedures to determine the percentage of total harmonic distortion at a facilities power service entrance. Commercial software is available to assist in the calculations, and VFD manufacturers may also provide the calculations. Inductive filters limiting VFD harmonic content distortion to 3% are an industry standard for many VFDs. Some methods may be better suited than others based upon motor horsepower. For instance, at horsepower ratings above about 50 hp, an 18-pulse may provide greater mitigation than an inductive reactor. The design engineer may wish to consult the VFD manufacturer to select the harmonic mitigation method best suited for specific applications.

From a mechanical design perspective, upgrading an aging chilled water plant presents an opportunity for implementing a series of energy conservation measures (ECMs), such as: 1) variable primary only flow; 2) water side economizer; and 3) advanced sequences of operation.

As shown in Figure 5, a variable primary flow pumping arrangement, there are no secondary pumps. Each primary pump is provided with a VFD and is sized to match the capacity of one chiller. Having chillers and pumps of different sizes could pose challenges during the operation of the plant. Further, the maintenance costs could also increase; this is because the facility managers will need to keep a stock of equipment and accessories (i.e., valves) of multiple sizes. In order to have good control of the water flow through the evaporator section of each chiller, these authors recommend the installation of a good water flow-measuring device (i.e., a high-quality inline flow meter or five-valve manifold differential pressure transmitter). Similarly, the motorized isolation valve for each chiller should have good authority and be provided with an analog actuator; this is to ensure that the overall plant chilled water flow is distributed evenly across multiple operational chillers. A new central plant bypass valve will also need to be provided in lieu of the existing bypass valve; this is to ensure there is good control over the minimum flow required thru each new chiller. 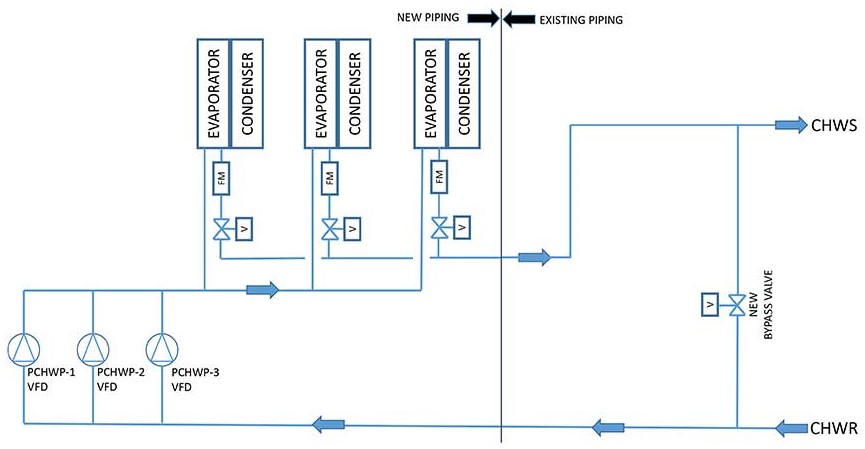 Even though this ECM will most likely result in plant energy servings and reduced long-term operational costs, the phasing of the project and associated first cost may prohibit the implementation of this ECM.

When upgrading an existing chilled water plant, from a phasing and first-cost perspective, a water-side economizer ECM may have a better chance of being implemented. Depending on the location of the project and the code version that is required to be followed by the project, said ECM may be a mandatory requirement. Similar to the recommendations associated with the variable primary-only pumping arrangement, good water flow-measuring devices and control valves are needed in order to have a good and repeatable control of the entirety of the central plant. Figure 6 shows a proposed schematic of the primary-secondary plant; each chiller and pump is provided with a VFD.

Replacing existing plant equipment will also require the installation of a new central plant controls system. Figure 7 shows a proposed schematic for the new central plant controls system. The VFDs should be controlled by the building automation system (BAS) by using hard-wired control points and, at the same time, monitored via BACnet network (i.e., network points). In the opinion of these authors, having hardwired points control the VFDs will help mitigate any risks of communication delays or breakdown across a BACnet network. 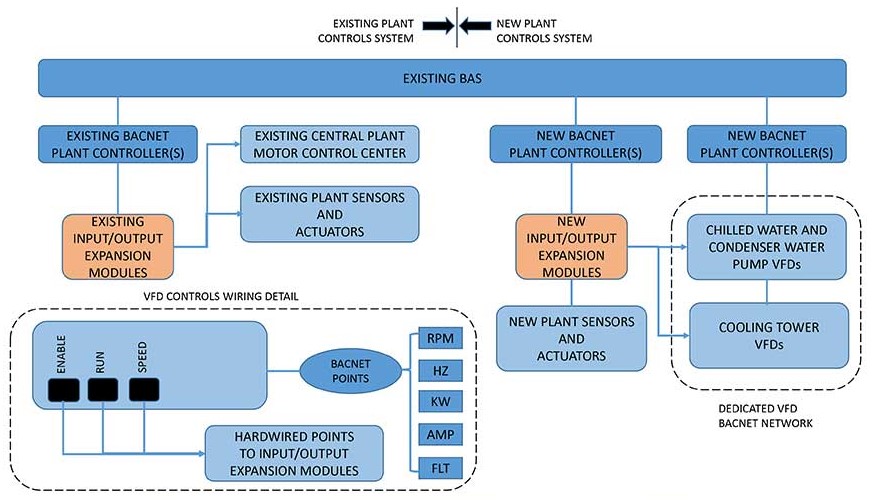 Replacing aging equipment in a central chilled water plant is never just about replacing the equipment. Phasing, harmonics, and controls are just a few of the design items that need to be considered early on in the design process; discounting these items may have a significant (negative) impact on the cost and schedule of the project.

Robert Pfaff is a licensed P.E. and has been working for SmithGroup in the Washington, D.C., office for the past 14 years. He earned a bachelor’s degree in electrical engineering from The Catholic University of America in 1987.  He has more than 25 years of experience in electrical engineering design focusing on health care facilities, commercial buildings, laboratories, government facilities, and museums. Contact him at robert.pfaff@smithgroup.com.

Melissa Lim is a mechanical design engineer at SmithGroup who works primarily on government and higher education projects.  As an engineer in training, Melissa is looking to acquire valuable HVAC design knowledge and experience to take the professional engineering exam in 2023. She can be contacted at melissa.lim@smithgroup.com.