VFDs allow machinery to match the demand of a system by modulating speeds and therefore capacity, but the benefits hardly end there. They allow engineers and designers to exploit what may seem like a loophole in physics. The fan laws and pump laws, also known as affinity laws, describe how VFDs can modulate capacity non-linearly relative to power input. For example, a fan motor moving 1,000 cfm at full speed will move 500 cfm at 50% but will only consume approximately 12.5% of the power used at full speed. The power use is proportional to the cube of the speed, as expressed below:

For example, if a motor draws 10 kilowatts (kW) at full speed, what would the power draw be at half speed? 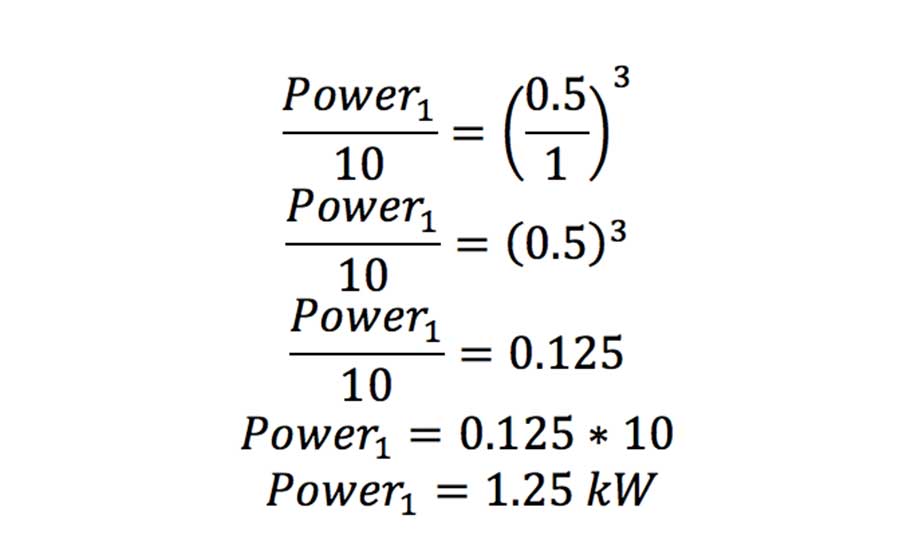 In HVAC applications, VFDs really shine during part-load periods when cooling or heating loads may be minimal. During part-load conditions, heating and cooling loads drop, allowing fan speeds to drop proportionally with those loads. When those fan speeds drop, power consumption decreases non-linearly. In a constant volume fan system, a fan system without a VFD-driven motor, those savings are nowhere to be found. The relationship between motor power and motor speed or system load are illustrated in Figure 1. 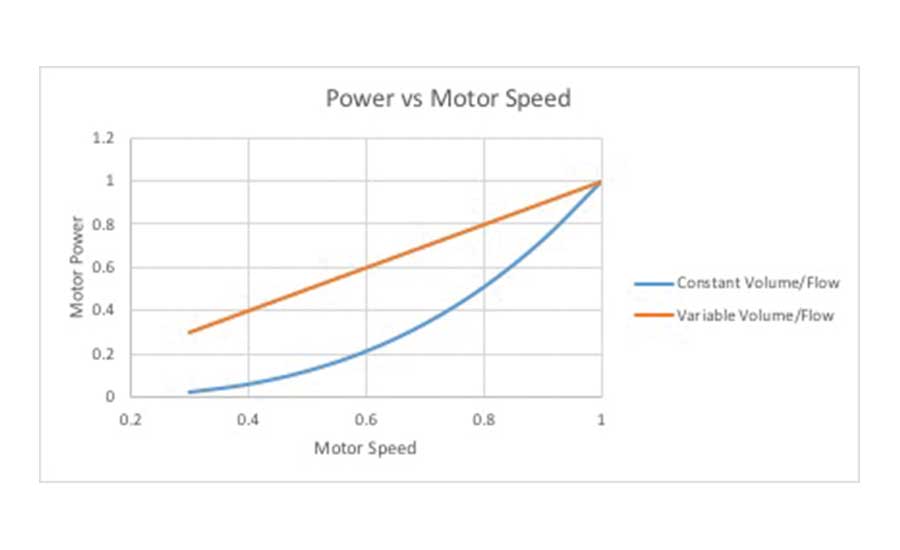 VFD use is becoming ubiquitous on air-side systems

VSDs are used on a variety of systems in buildings. Engineers and designers typically specify their use on all new hydronic air-handling-system fan motors. More recently, VFD retrofits on existing systems like these have become very economical, and one may see payback periods spanning less than three years. VFD use on new multistage, direct-expansion package unit fan motors is becoming more common, and there are even VFD retrofit solutions for package unit supply fan motors.

VFD adoption in central plants has taken a little longer to catch on. A minimum flow must typically be maintained through chillers and boilers to avoid scale buildup and prevent laminar flow, which decreases heat transfer. This minimum flow problem can make a primary chilled water or condenser water variable flow retrofit with VFDs complicated and fussy. A proper VFD retrofit of a chilled water plant should start with converting a constant volume cooling tower fan to variable volume, since a varying cooling tower fan speed based on wet-bulb and condenser water set points has no negative impacts on chiller performance.

Recently, VFD-driven centrifugal and rotary-screw compressors have made their way into the chiller market. These chillers are capable of efficiently unloading and pair well with variable primary flow pumping systems. One might ask, if variable primary flow can be achieved safely with chillers, why has variable condenser water flow lagged behind?

A lesser-known concern is that reducing condenser water flow can cause areas of the cooling tower fill material to dry up. This drying effect of cooling tower fill is known as “dry air disease” and should be avoided at all costs because it will actually increase energy consumption over the long run. When sections of the fill material dry up, they begin to build up mineral deposits at the interface between wet and dry fill material, meaning the fill may require replacement earlier than anticipated. Additionally, the air that is drafted into the cooling tower fill will take the path of least resistance: the dry spots. No heat transfer occurs at these sections because there is no water to evaporate, and thus the fan or condenser water pump motor will compensate by increasing speed. This dry air disease can enter into a downward spiral of lost cooling tower efficiency and continual scale buildup.

Testing should be done to determine the minimum condenser water volume needed to keep fill material wet. This can vary depending on outdoor weather conditions so consider testing in shoulder months and under different wet bulb conditions. 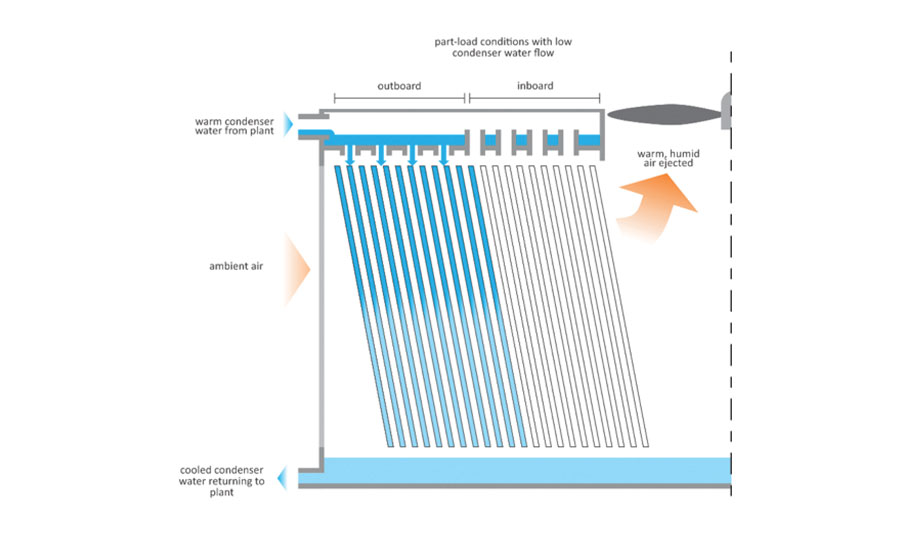 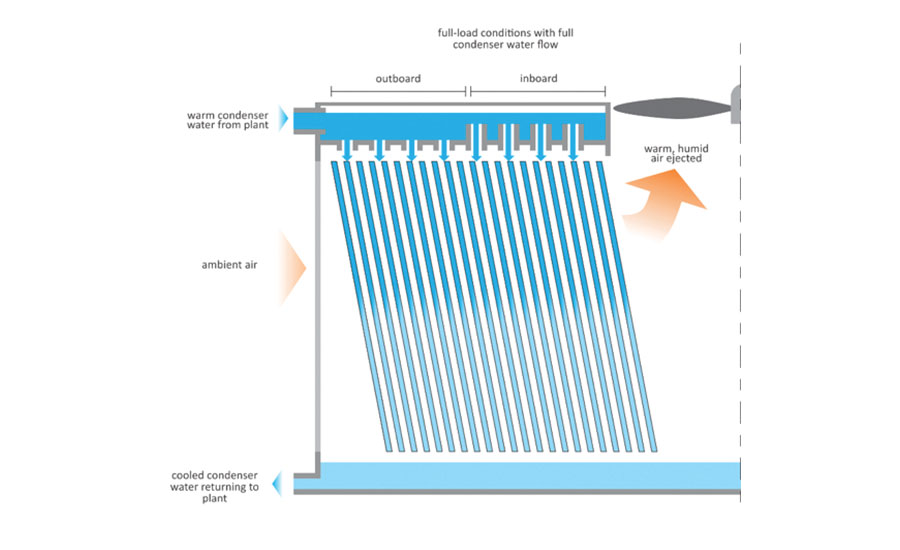 On a multi-chiller, multi-tower system with elevated nozzle cups installed, all three towers could pass the condenser water of just one chiller with each fan running at 33% speed. This is effectively trading fan energy for wetted fill, and it’s a really good bargain thanks to the affinity laws. 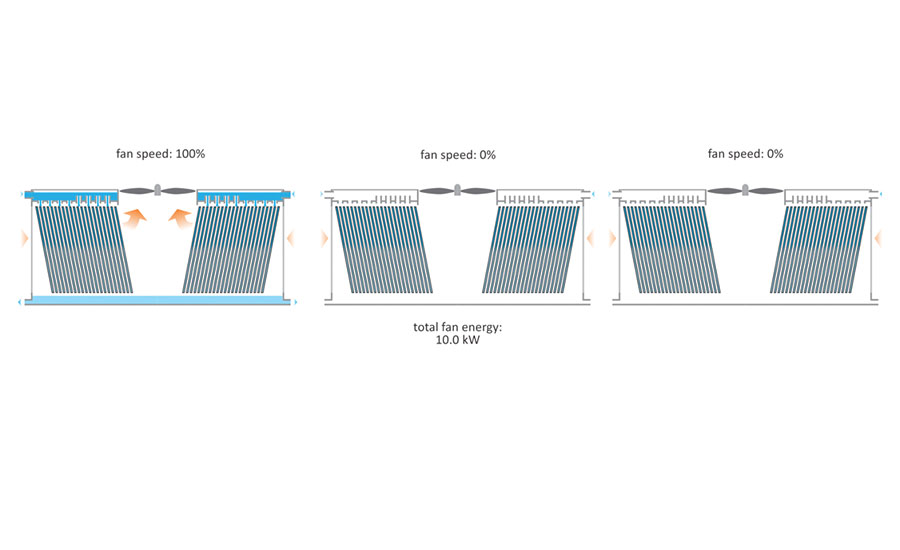 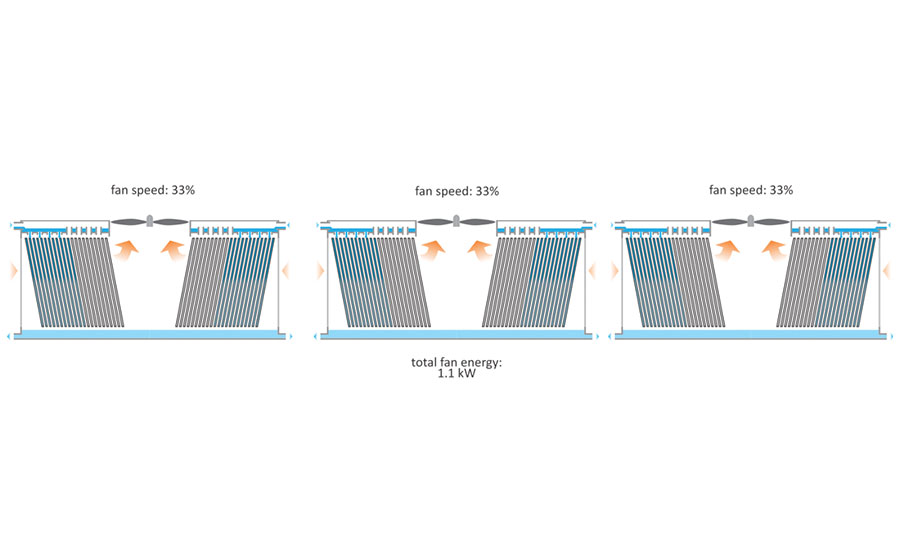 The building runs a year-round sorting operation and has a relatively high internal heat load. In addition, trailer docks around the building contribute to a significant infiltration load. Despite having a relatively short cooling season with an average of 1,740 cooling degree days, chillers were typically disabled only for a few months in winter. The three chillers had a combined capacity of 1,080 tons, although only two can run simultaneously.

The HVAC retrofit design intent was to reduce energy consumption while minimizing the impact on  comfort. This was done by installing VSDs on heating hot water pumps and condenser water pumps, reducing VFD minimum speed set points, adjusting economizer set points and minimum outdoor air damper positions, testing and balancing, programming energy efficient set points, setbacks and schedules, installing a premium-quality weather station, and revising controls sequences. One thing to note is the cooling tower was replaced with a like-and-kind cooling tower and was deemed to have little effect on energy consumption.

The entire HVAC retrofit project resulted in a modeled annual savings of 1,400,000 kWh, 30,700 therms, and 570 kilogallons of water. Although the impact of condenser water pump energy savings for this project cannot be determined from overall energy savings, in the next section several scenarios are presented that estimate the energy impact of variable condenser water pumps.

Using energy modeling software, a fictional building was modeled in four locations around the U.S. The building is a 100,000-square-foot light manufacturing facility. Table 1 shows the results of the energy model and expected savings of variable condenser water flow. Condenser water VFD retrofits can reduce total facility electric consumption between 4-9%. The retrofit has the highest impact in hot and humid climates as seen in Table 1, but savings are still substantial in all climate zones where water-cooled chillers are used.

Most utility companies have offered incentives for retrofitting pump and fan systems with variable frequency drives, often paying out between $50-200 per horsepower installed. However, with incentive budgets drying up as VFD retrofit projects become more economical, Wood has found that variable flow condenser water retrofit applications to be one of the few HVAC-related VFD incentives available at many utilities across the country. Even the notoriously fussy incentive program at Southern California Edison still lists “variable-speed drives on condenser water pump control” as their only HVAC-related VFD express solution.

Ian O’Connor, CEM, is an energy engineer at Wood Plc, where he has been working since graduating from the University of Florida in 2014. He has performed 3.3 million square feet of ASHRAE level I energy audits and has developed lighting and HVAC energy conservation projects for numerous clients. Contact him at ian.oconnor@woodplc.com.