Chillers have typically been thought of as providing cold water to cooling coils located in a variety of air-handling systems throughout a building. However, there are certain building owners and operators who put a high value on energy reduction and sustainability. Heat recovery chillers (HRC) and water-to-water heat pumps are one way to improve the energy efficiency of a building’s mechanical system, as these systems reuse the energy in the system before the energy is rejected to the atmosphere.

It’s important to find an accurate method to calculate the power consumption of an HRC to better validate system efficiency. Most energy modeling software on the market does not support the simulation of an HRC system, especially when the chilled water source is supplied from a variable temperature campus loop. This is the challenge the authors faced during a recent project, as they worked to develop a way to accurately model these systems. This article explains how to accurately model an HRC system that is connected to a variable temperature campus water loop.

The central plant piping arrangement for the case study substitutes a heat exchanger in place of a traditional condenser water system. Heat exchangers decouple the building from the campus central plant. Multiple HRCs are provided in a parallel arrangement that would allow individual HRCs to operate in cooling or heating mode. A water transfer loop between the heat exchangers and the HRCs enables the independent operation of the HRCs. Figure 2 indicates the piping diagram for this system.

FIGURE 2. An HRC system with a campus water loop.

The mechanical process is not 100% efficient, and there is always heat loss during the actual operation process. The actual COP is always slightly lower than its theoretical COP, which is also known as Carnot COP, from the Carnot refrigeration cycle. It is a function of the upper and lower temperatures of the cycle, which is equal to the condenser and evaporator temperature. The reverse Carnot cycle is the most efficient refrigeration cycle operating between these two specified temperature levels. A coefficient η is utilized as the ratio of actual COP to the theoretical COP. This is known as the relative COP.

Table 1 is an example of the given manufacturer HRC performance curve. 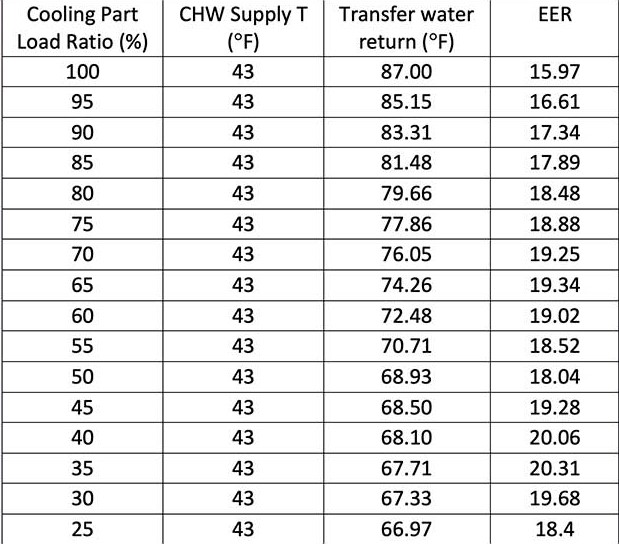 The theoretical COP at different cooling part-load ratios can be calculated based on the condenser and evaporator temperature.

The condenser and evaporator temperature can be calculated based on the given chilled water supply temperature, transfer water return temperature, and approach temperature.

Temperature differences between the various systems need to be accounted for in both the heating and cooling applications. This case study has various water systems that heat is transferred through with the decoupling heat exchangers and the transfer water loop. The system was designed with a 2°F approach for the heat exchangers that decouple the building from the central plant. Similarly, approach temperatures in the transfer water loop and in the HRC need to be accounted for between the evaporator and condenser. The system was designed for 8° and 4°, respectively. Approach temperatures and system delta Ts will vary based on conditions for specific applications.

4.1 Relative COP (η) to Part-Load Ratio Curve - Using the aforementioned methods, the relative COP was able to be calculated from the HRC manufacturer’s part-load curve. In Table 2, the HRC manufacturer’s data is shown in the green columns, and the white columns indicate the system water temperatures after heat is transferred between systems and the resultant COPs. The relative COP is the highest at and near full-load operation, and there is a significant drop off at approximately 60% part-load operation of the HRC. 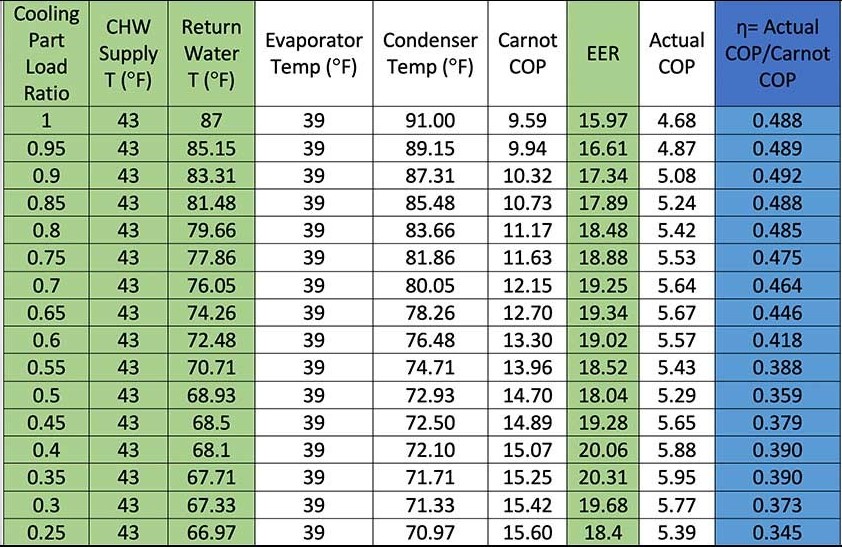 TABLE 2. The process of calculating relative COP in cooling operation. 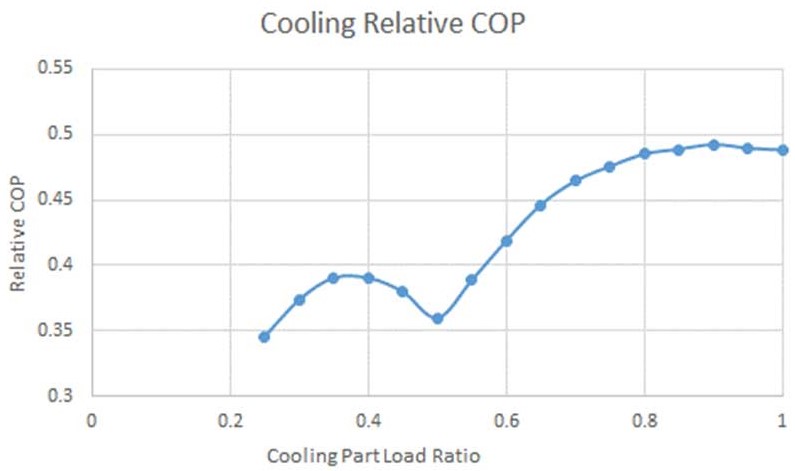 Figure 3 displays the relative COP curve, η, which shows the effect of lowering the cooling part-load ratio from the manufacturer’s part-load curve.

Similarly, Figure 4 is the relative COP curve, η, which shows the effect of the heating part-load ratio from the manufacturer’s part-load curve. 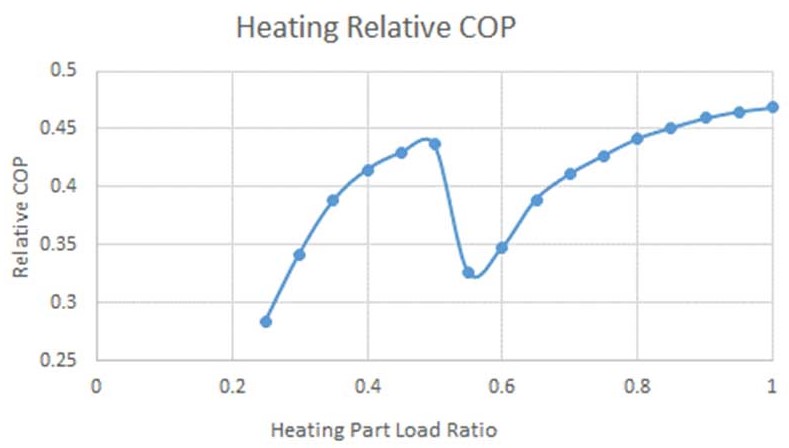 With the curves shown in Figures 3 and 4, the relative COP, η, valve can be understood with cooling or heating part-load ratio in actual operation mode. 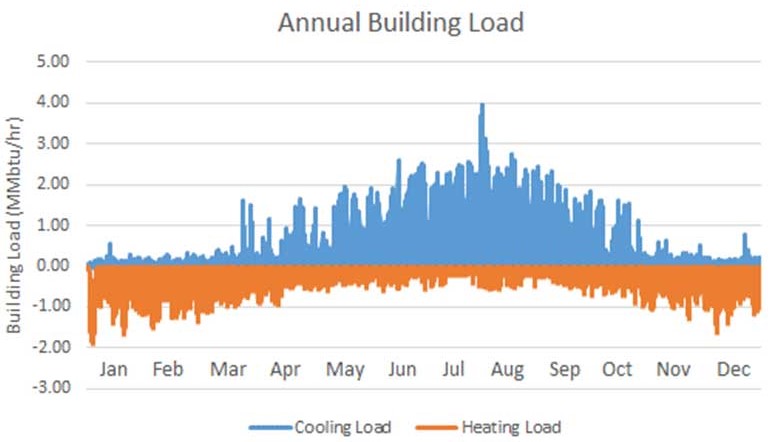 For this case study, Figure 6 shows the annual cooling and heating HRC energy consumption, which is 389 MBtu per year in cooling mode and 549 MBtu per year in heating mode. This shows the benefits of redistributing the heat in the system prior to rejecting the heat to the atmosphere or, in this case study, back to the campus central plant. This also makes full use of the mild temperature campus water. The mild temperature campus water makes it possible to recover heat from the central plant side, which increases the campus overall efficiency. 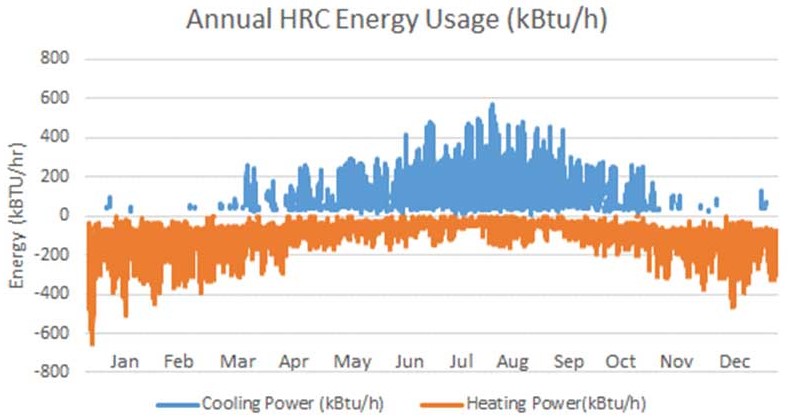 4.4 Hourly Heating and Cooling Load to the Campus Water Loop

HRCs and water-to-water heat pumps can provide significant energy savings over traditional central plant arrangements. This is important as the HVAC industry continues to serve as a leader in sustainability and overall energy reduction goals. Being able to accurately model these systems will lead to better system operation. This will be done by being able to predict cooling and heating coincident loads as well as when and how much of the loads will need supplemental cooling or heating. This will allow engineers to properly size equipment to maximize the efficiency of the overall mechanical system.

Jon Silhol is a principal and mechanical engineer with SmithGroup. He is a member of ASHRAE and has 20 years of experience designing mechanical systems for various building types.

Ting Cai is an energy modeler with SmithGroup. She has experience with laboratories, hospitals and health care facilities, higher education classrooms, and office buildings.