Setting the Payback Parameters of a Demand-controlled Kitchen Ventilation System

Will a DCKV system always offer a reasonable payback on a kitchen ventilation system greater than 5,000 cfm?

Restaurants and commercial kitchens are notoriously one of the largest consumers of energy per unit of floor area. Moreover, the kitchen ventilation system is often the largest energy-consuming component in a food service facility. Building owners and engineers often struggle to justify additional costs for energy-efficient measures, such as a demand-controlled kitchen ventilation (DCKV) system. The energy codes that reference ASHRAE Standard 90.1-2010 and newer prescribe such energy-saving measures for kitchen exhaust airflows over 5,000 cfm, but currently only 17 of the 50 states have adopted such codes.

I live and perform most of my work in a state that does not require any kind of kitchen ventilation energy reduction, but I still advise my clients of their options for energy conservation strategies in commercial kitchen design. As engineers, it is our job to advise building owners or restaurant operators of the benefits that a comprehensive HVAC system design can provide. But first, we need to understand how a DCKV system saves energy and the value that provides for our clients. Let us explore the multiple factors that affect kitchen ventilation energy usage and develop some rules of thumb for determining when a DCKV system makes sense.

DCKV refers to any engineered, automated method of modulating the amount of air exhausted for cooking operations in response to a part- or no-load condition. These systems are controlled by exhaust duct temperature sensors, vapor detection sensors to detect smoke and grease byproducts in the kitchen hood, or even infrared sensors to measure appliance surface temperatures. ASHRAE 90.1 lists DCKV as one of three acceptable energy-saving strategies required for kitchens or dining facilities with a total kitchen hood exhaust airflow rate greater than 5,000 cfm.

Why 5,000 cfm? It seems like an arbitrary number, but there are a lot of similar thresholds for air and water flow in Standard 90.1. Surely if 5,000 cfm is listed as a cutoff for energy-saving equipment, it would save enough money to pay for the equipment, right? At least that’s the question to which building owners want an answer; so that is the question I want to explore. Will a DCKV system always offer a reasonable payback on a kitchen ventilation system greater than 5,000 cfm? With the numerous factors that can affect kitchen ventilation energy usage, let’s try to make some assumptions and establish some ranges of payback for DCKV equipment. 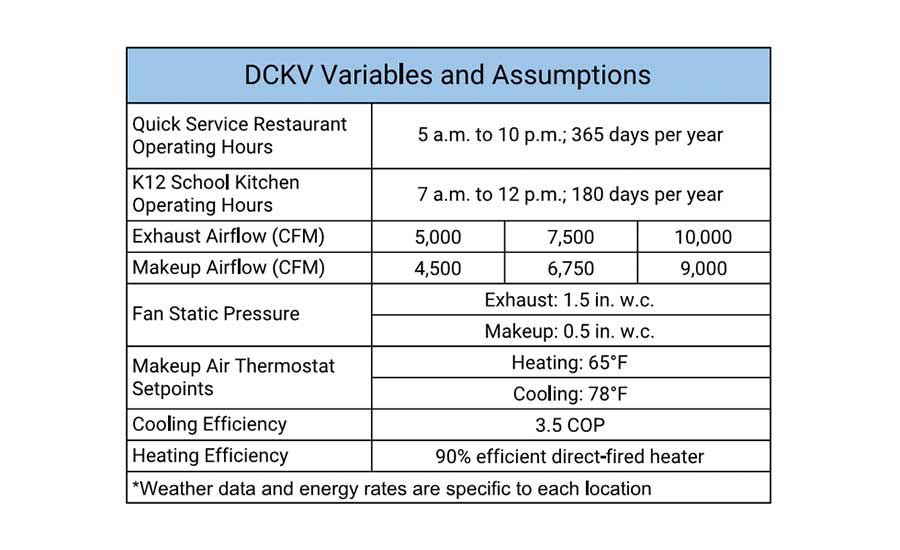 Donald Fisher’s 2003 article “Predicting Energy Consumption” explains the many variables that affect commercial kitchen ventilation energy consumption and cost. Some of those factors include cooking type, hours of use, climate zone, ambient temperature, energy rates, ventilation airflow, fan energy, makeup airflow, makeup air heating and cooling, and makeup air temperature set points. We will look at each category and make some basic assumptions to provide a reasonable analysis on energy cost savings and payback with a DCKV system. The more we can estimate actual kitchen conditions, the more accurate we will be in our analysis. 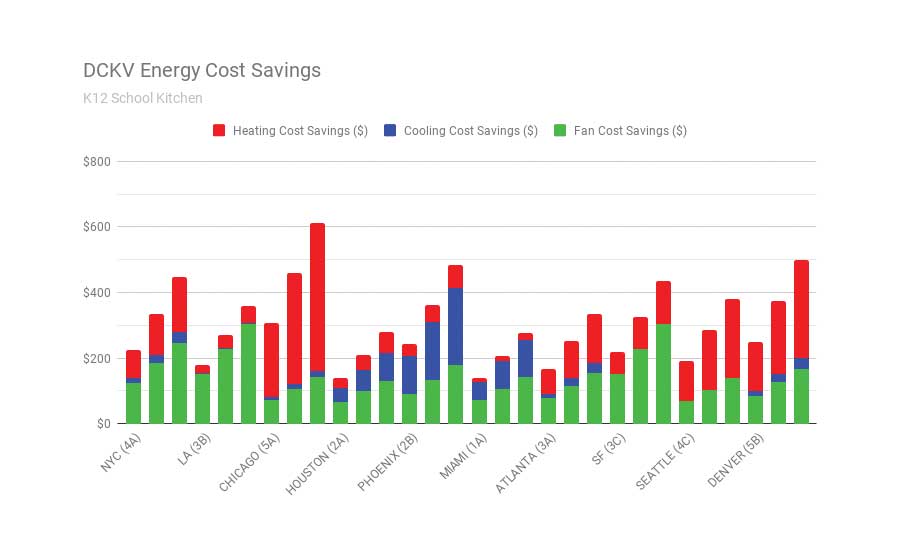 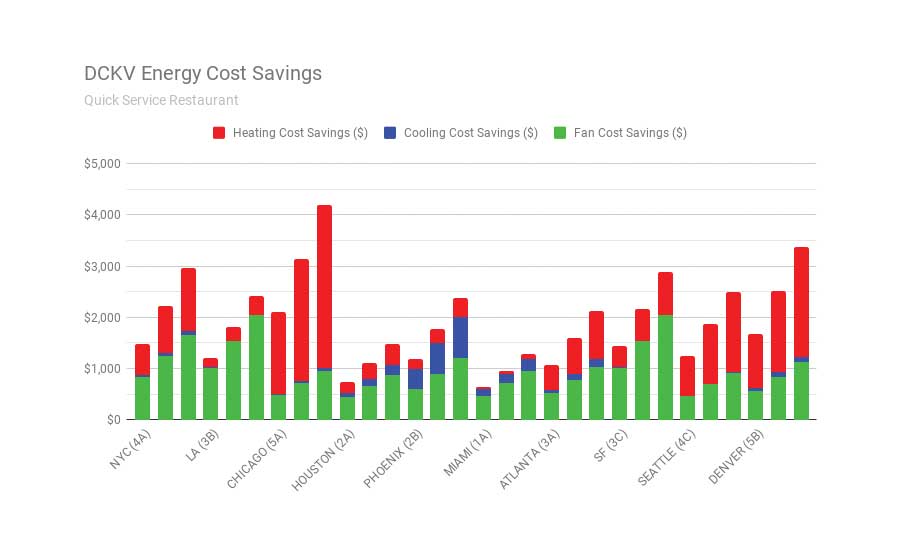 Cooking Type and Hours of Operation

Although kitchens typically make up the highest energy usage in a building, there is still a large range of ventilation energy used depending on the cooking type and hours of operation. Cooking operations vary in number of meals served and time of day (breakfast, lunch, or dinner). Let’s consider kitchens for K-12 schools, the kitchen type with one of the lowest hours of operation. Most school systems require 180 days of school per year, and many K-12 school kitchens will only prepare lunch and a limited breakfast. In comparison, quick-service restaurants (QSR) of the fast-food variety have some of the highest hours in operation, and many are open 24 hours per day.

We can safely say that the K-12 school kitchen (five hours per day, 180 days per year) and QSR (17 hours per day, nearly 365 days per year) can establish the lower and upper boundaries of our payback analysis for hours of operation. Any other restaurant or food service facility type should fall within this range of operating hours.

Climate zones and weather data have an enormous impact on heating and cooling loads for makeup air. Some northern zones may not require any cooling during the year while locations such as Miami may not require much heating. For the purpose of analyzing equipment payback, energy rates will also play an important factor in our analysis. For this reason, we will calculate heating and cooling loads for the largest metropolitan area within 10 different U.S. climate zones. Heating and cooling loads will be calculated from each city’s weather data with consideration for each kitchen’s operating schedule. We will estimate the energy rates in each city based on the average energy rates for electricity and natural gas by state.

Kitchen ventilation airflow changes with kitchen hood length, cooking type, and duty of cooking equipment under the hood. We will include a range of airflows for a typical medium-sized kitchen (5,000-10,000 cfm) where DCKV is prescribed by the current ASHRAE Standard 90.1. Some kitchen ventilation equipment manufacturers that use duct temperature sensors for DCKV choose to limit airflow reduction to 80 percent of the design airflow so that the hood’s capture performance is not compromised. Because of this and supposing that there will always be some diversity between cooking equipment operation, let’s assume a kitchen with DCKV will operate at 80 percent of the airflow of a standard kitchen ventilation system. Since DCKV allows the ventilation airflow to modulate based on cooking activities, a small reduction in airflow can have a large impact on energy thanks to fan affinity laws. Energy savings can be realized through reductions to system static pressure and fan horsepower. For example, a 20 percent reduction in fan speed will result in a 48 percent reduction in fan energy. 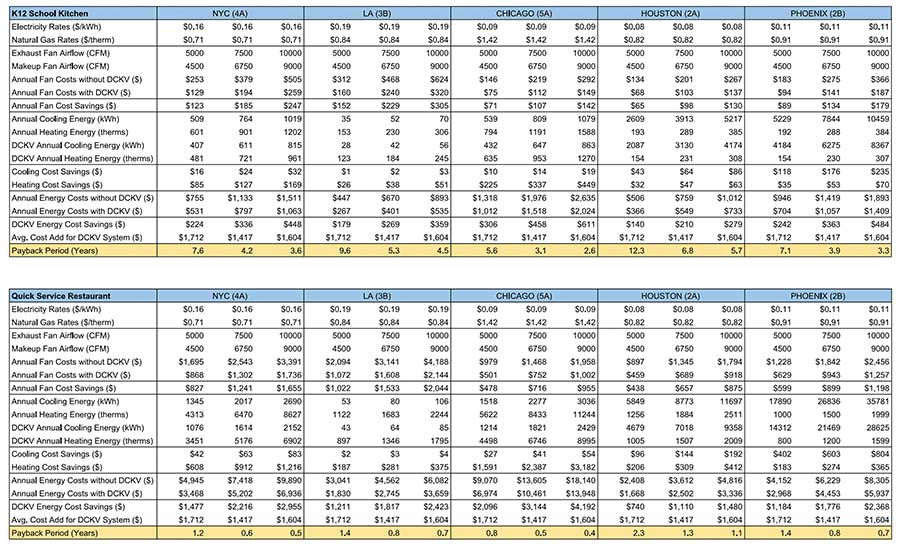 The need to heat or cool the makeup air depends on the climate zone. Some building owners may decide that the premium paid for makeup air cooling is not worth the investment, especially if the kitchen is in a climate with a limited number of cooling hours. Makeup air heating is common and is recommended for nearly all climates. The makeup air heating and cooling set points, however, depend upon the comfort requirements of the kitchen occupants. The building owner or restaurant operator will normally set this criteria.

Pricing for kitchen ventilation equipment will vary across regions and manufacturers. For our payback analysis, I requested budget pricing numbers from two major manufacturers at each of the three airflows we considered. It is clear that manufacturers price their control systems differently. The two costs for the DCKV control system were averaged at each airflow range and compared to the energy cost savings calculated for each city in our analysis. 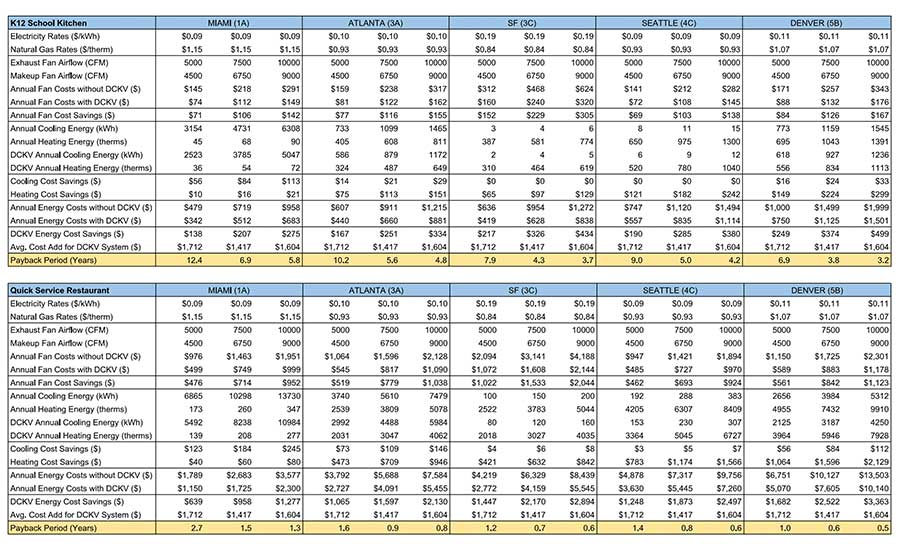 Since the number of kitchen hours of operation is expected to play a large part in determining kitchen energy costs, we want to first establish a range to guide our calculations. The DCKV payback analysis for QSRs and K-12 school kitchens serve as upper and lower limits for estimating equipment costs and payback times. The average exhaust and makeup airflow reduction by the DCKV was also expected to greatly affect energy cost savings. By limiting the fan airflow reduction to just 80 percent, we establish a very conservative estimate for payback analysis. All real-world scenarios are expected to fall within these upper and lower limits for operating hours and perform with at least a 20 percent reduction in fan airflow.

Fan airflow energy reductions due to DCKV consistently made up a large portion of the energy cost savings. Changes in electric utility rates between cities impacted the overall percentage of fan energy cost savings only slightly. It seems that the equipment payback occurs more quickly in areas with a large heating load or high natural gas rates. A kitchen in a city like Chicago that has both a high heating load and high natural gas rates may consider using electric heat for makeup air heating. The energy cost savings from makeup air cooling was lower than expected. Phoenix and Miami both have cooling loads that are much higher than the heating loads, but due to the efficiency of the cooling equipment, with a COP of 3.5, the amount of energy used to cool the makeup air is substantially lower than the load.

In each climate zone there is a reasonable time frame for payback at each of the airflows evaluated for QSRs, which typically recover the investment for DCKV equipment within one and a half years. As ventilation airflow is increased, the payback period quickly reduces to less than one year in most cases. For the minimally utilized K-12 kitchen, payback approaches 10 years at the low airflow and is reduced to five years at the high airflow. In all cases, equipment payback is reached within the life of the equipment, but kitchen operating hours make a larger impact on payback than ventilation airflow.

DCKV is already being prescribed by the latest energy codes at each of the airflows considered. This seems to support the idea that for an energy code requirement to be truly valuable, the prescription should also offer a substantial return on investment. For certain kitchen types, we’ve shown that DCKV cost savings are achievable and scalable above the threshold of 5,000 cfm. Future considerations need to be evaluated for payback on DCKV equipment installed on kitchens with exhaust rates below 5,000 cfm. In fact, ASHRAE 189.1, the standard for the design of high-performance green buildings, is already prescribing the use of DCKV for facilities with kitchen hood exhaust airflow rates above 2,000 cfm. It seems like this would warrant a similar payback analysis for airflows from 2,000-5,000 cfm.

An energy cost analysis is best performed on a per-project basis since considerations for projects are unique to the project’s location and cooking requirements. While this evaluation gives us a broad look at a complex system, there were some additional takeaways I gleaned from our study.

Andrew McKeever, P.E., LEED AP BD+C, is a licensed professional engineer and project manager at Dulohery Weeks in Savannah, Georgia. He specializes in designing HVAC systems with an emphasis on energy efficiency and new technology. He is a LEED AP with extensive experience in building energy analysis. Contact him at amckeever@dulohery.com or connect with him on LinkedIn.