This website requires certain cookies to work and uses other cookies to help you have the best experience. By visiting this website, certain cookies have already been set, which you may delete and block. By closing this message or continuing to use our site, you agree to the use of cookies. Visit our updated privacy and cookie policy to learn more.
Home » ASHRAE 90.1 Vs. IECC — Is it Time to Take a Stand?
Commercial HVACHigh-Performance BuildingsHVAC Design/Construction Process

Though these codes try to coexist like friendly allies, they seem to pair more like the mongoose and cobra.

Please raise your hand if you enjoy having two energy codes providing the standard of care for your projects. For most of the U.S., this is the dilemma for every building project. Though most jurisdictions adopt the International Energy Conservation Code (IECC) published by the International Code Council (ICC), ASHRAE 90.1 remains enforced by many institutions, such as the U.S. Green Building Council (USGBC).

Further, the IECC references ASHRAE 90.1 as a compliance path. This paper will ignore Title 24 (California Energy Commission, 2019), which is as much an outlier as California, the state that mandates it. Though the codes try to coexist like friendly allies, they seem to pair more like the mongoose and cobra. Why does the design community continue to accept this bifurcation of such a vital part of our design basis?

The most recent version of ASHRAE 90.1 was published in 2016 (ASHRAE, 2016). This edition includes revisions to the building envelope, lighting, and mechanical directives. Within the mechanical section, changes include a mandate for monitoring of large, electric-driven chilled water plants for energy use and efficiency; efficiency and rating requirements for dedicated outdoor air systems (DOAS); and performance monitoring for air economizers for air-cooled DX cooling units. Next year, a new edition of ASHRAE 90.1 will be published, and the design community will again scramble to adapt to any changes. On the other hand, the most recent version of the IECC was published last year (International Code Council, 2018). It includes significant changes affecting the built environment, including the requirement of system commissioning and limits on heated and cooled vestibules. Everyone responsible for the design, maintenance, or ownership of a commercial building continually experiences energy code anxiety during these regular cycles of publication.

As previously mentioned, most authorities having jurisdiction mandate compliance with the IECC. The compliance path for the IECC, found in Section C 401.2, requires that one of the following is met:

This is a head-scratcher. Is the IECC the code or is ASHRAE 90.1? A review of both standards shows nuanced differences between the compliance paths in each document; however, for the most part, the obligations in both are similar. 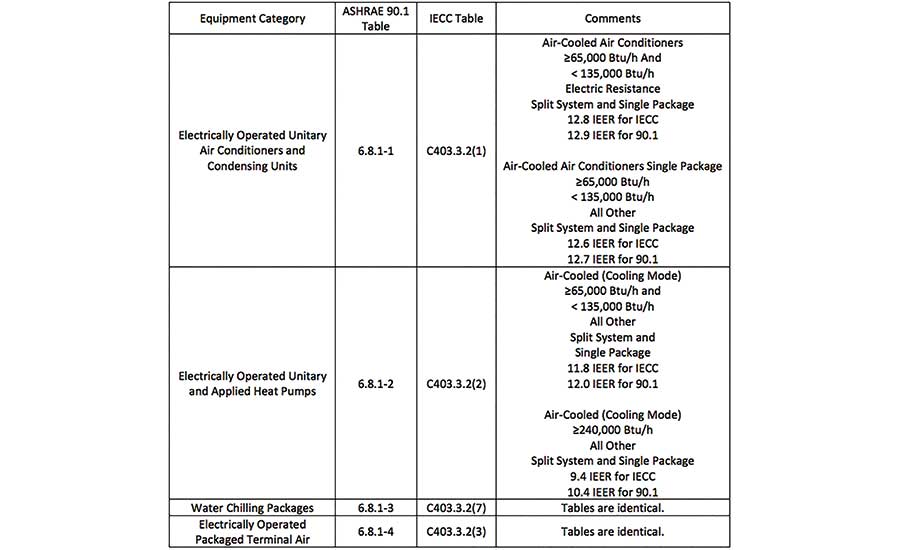 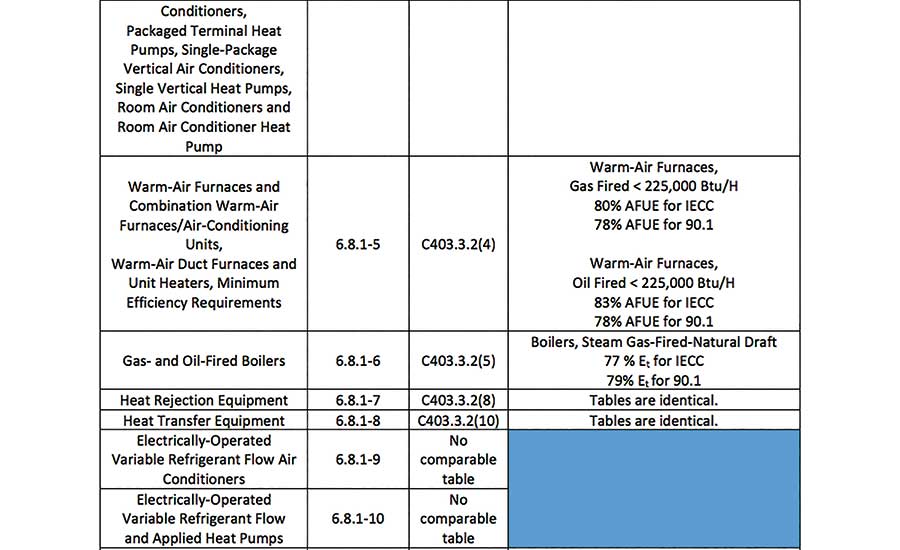 Let’s start with climate data. The IECC specifies climate zones in Section 3 — General Requirements. The standard states that much of the data is derived from work performed at the U.S. Department of Energy’s Pacific Northwest National Laboratory (Briggs, 2002). This work was presented to ASHRAE during the 2003 Chicago Winter Meeting. On the other hand, ASHRAE 90.1 presents the methodology related to climate data in Annex 1 of the standard. The data used in Standard 90.1 is published in ASHRAE Standard 169 (ASHRAE, 2013), which is based on a research project completed in 2009 (Thevenard, 2009). This newer database is different than the one used by the IECC. For example, Athens County in Ohio is in Climate Zone 5A according to the IECC but is in Climate Zone 4A, according to ASHRAE 90.1. As a result of using different climate zone definitions, the two standards, though similar, are not equivalent.

The compliance path specified in ASHRAE 90.1 is also three-fold but different than the IECC:

ASHRAE 90.1 doesn’t list the IECC as an alternate compliance path. If it did, an engineer could at least have fun chasing his tail while pondering the nuanced alternatives available for compliance.

Let’s compare the prescriptive paths for HVAC systems between the two standards. The prescriptive compliance path in ASHRAE 90.1 is described in Section 6.4. A main feature of the prescriptive path is a series of tables describing the energy efficiency requirements for equipment. These are summarized in Table 1, which correlates them with tables in the IECC.

The efficiency equipment tables that are common between the two standards are similar and, in some cases, are identical. However, ASHRAE 90.1 contains several additional tables delineating equipment beyond the tables in the IECC. This may change in the next edition of the IECC.

The balance of Section 6 in ASHRAE 90.1 stipulates requirements for HVAC system parameters. Although the IECC does not follow the same structure as ASHRAE 90.1, it covers the same ground in Section C403. From defining the methods of system sizing to mandating specific controls sequences, the two standards are similar. For example, under section 6.5.1 in ASHRAE 90.1, economizers are specified, while in Section C403.5 of the IECC, economizers are prescribed. Similarly, ASHRAE 90.1, section 6.5.3.1, and the IECC in section C403.8.3, specify fan efficiency grades using identical tables. Both documents require energy recovery for ventilation systems (§6.5.6 in ASHRAE 90.1 and §C403.7 in the IECC). The tables defining the systems requiring energy recovery are identical with the exception that ASHRAE 90.1 includes climate zone 0 in its tables.

A comparison of the language of ASHRAE 90.1 with the IECC demonstrates strong parallels amongst them. In many sections, the two documents are indistinguishable. In fact, this cursory review of the codes suggests following one over the other will not produce a discernible difference in energy performance. Yet, they continue to be published separately. While the advantages of having two national energy codes remain a mystery, their coexistence creates confusion when projects are being planned. Because the IECC is typically the legal design requirement, it’s predominately the document referenced in the project design basis. However, its use of ASHRAE 90.1 as a prescriptive path opens the design process to speculation regarding which document is the standard of care. It’s ridiculous to burden the practitioners of the building sciences with the management of these duplicative documents; however, neither ASHRAE nor the ICC are likely to relinquish their positions as the promulgators of the national energy codes. That said, maybe they could be coaxed into jointly publishing a unified code? This would greatly simplify the design community’s efforts and, because of that, improve the design process. By streamlining the design process, the creation of a single code may result in better buildings. Perhaps those who read this could reach out to ASHRAE and the ICC to push them toward this result.

I’ve reached out to the chairs of the two cognizant committees overseeing these codes and I’ve yet to receive a response as of the date of this publication.

Streamlining the Modeling Process By Exporting Data within BIM John Varley, P.E., FASHRAE is the mechanical discipline manager for AAA Engineering in Chicago and has been a professional in the building sciences industry for more than 35 years. He is a past chair of ASHRAE Technical Committee 9.10 Laboratory Systems and TC 9.11 Clean Spaces and received the Distinguished Service Award from ASHRAE. He has been published in the ASHRAE Journal, ASHRAE Transactions, The International Journal of HVAC&R Research, and Engineered Systems. He holds a bachelor’s degree in mechanical engineering from the University of Akron and a master’s degree in chemical engineering from Cleveland State University.

Streamlining the Modeling Process By Exporting Data within BIM

Is it Really Possible to Double the World's Efficiency in 20 Years?