With the ever-changing field of technology comes improvements in both energy and ease of use for many systems across the industry.

Within the HVAC industry, specifically, the opportunity to improve control systems and use of Internet of Things (IoT) and artificial intelligence (AI) to better assist in the operation of a building has become a topic of much interest.

The first step in designing for these kinds of modern control systems begins with the hardware and how to create a better layout that can accommodate the future software.

The common setup of a BACnet controls system for a building involves many pieces of equipment, including workstations and routers that are connected through a fast-acting Ethernet connection that allow data to be quickly downloaded and analyzed from the router forward.

However, the steps following the router are the reason for the slow exchange of information. Following the router is a connection to a BACnet Building Controller (B-BC) that takes on the process of translating the controlling message to the piece of equipment.

The slowdown in this process is caused by how the equipment is connected to the B-BC. As can be seen in Figure 1, the following equipment (B-ASCs - Building Application Specific Controllers) are connected by a Master/Slave Token Passing (MS/TP) loop in a daisy-chain configuration. 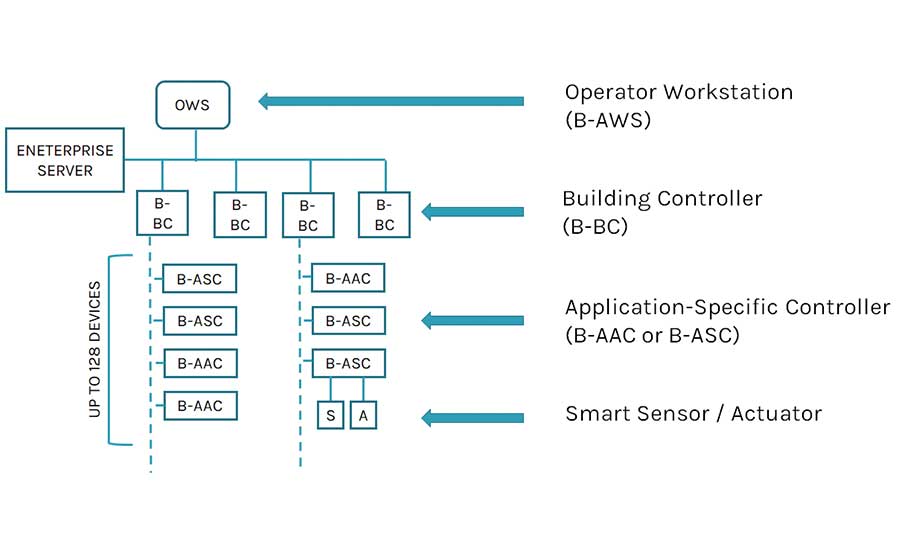 The MS/TP loop acts in a way that each master (B-ASC) will accept a command and translate that command to the slave devices. However, the command can only be read by one master at a time and only accepted by a slave device after the master has read the command. This command is then passed from master to master until it has gone through every device. This takes time as the command must check in with each B-ASC, be read, and then be translated if the command is applicable. Only then can it move to the next device.

MS/TP Loop configuration affects the speed at which a message can travel — in this scenario it is a maximum of 76.8 KBPS.

Another issue with this MS/TP loop is the number of devices that can be connected. While it’s possible to connect up to 128 devices, it is best practice to limit the connection to 40 devices. This, however, still leaves 40 devices that each command will have to check in with as it tries to find which controller will receive the message.

The processing time with this layout is much slower than what is feasible for modern technology, which is a missed opportunity in the era of IoT and AI-assisted optimization.

The MS/TP loop leads to a slow uptake of commands as well as a slow return of sensor data. This is due to the MS/TP loop also being utilized for sending commands, although not containing the speed or capacity to quickly return information to the workstation.

This information cannot be collected in a timely manner but rather is limited to being updated every few minutes.

A faster return speed would be necessary for a more accurate real-time picture of the information coming from the sensors. If more points were available to be analyzed by the system, it would allow for a more strategic optimization of the buildings systems and could, in turn, improve its overall efficiency.

A more recent update to the traditional BACnet controls loop came about with the addition of Ethernet cabling between the B-ASC side of the system (Figure 2.)

This addition created a faster information exchange between the B-ASCs, which helped to increase the speed of commands up to 100 MPBS. 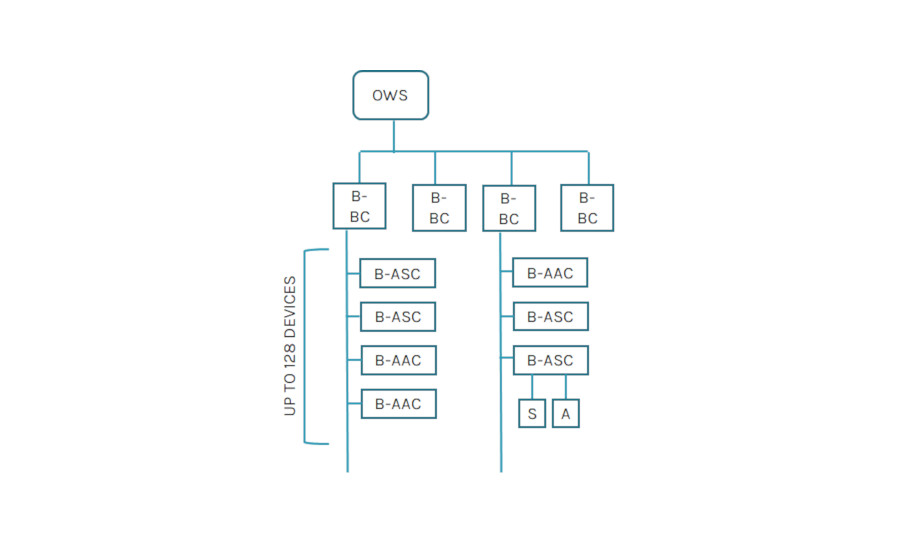 However, the equipment speeds have not been considerably increased. This means that while the commands can travel through the wiring faster, they are still limited by the speed that each piece of equipment can respond to.

Additionally, with the increased wire speed, there is a greater issue of too much information trying to reach the equipment. This can result in a case of information overload similar to a DDOS attack as the equipment receives too many commands at once.

With slower operating speeds and faster command speeds, the equipment and/or sensor can enter into an overload status and crash from the sheer amount of data being processed.

While the increase in speed of information in the wire may help in terms of movement of information, it is still not a final solution to creating a better BACnet system that allows for a network to both quickly distribute and collect information.

The future of a building’s control system will be based on creating a faster network that will allow for data to be transmitted to and from the equipment at much higher speeds so that it may be analyzed and optimized to provide for a more energy-efficient building.

It is the authors’ opinions that there are two innovative options available that are improving on the speed of the traditional BACnet systems.

The first option involves the use of Ethernet cables between the daisy-chained set of controllers. The system set-up would be similar to the previously mentioned Ethernet system. 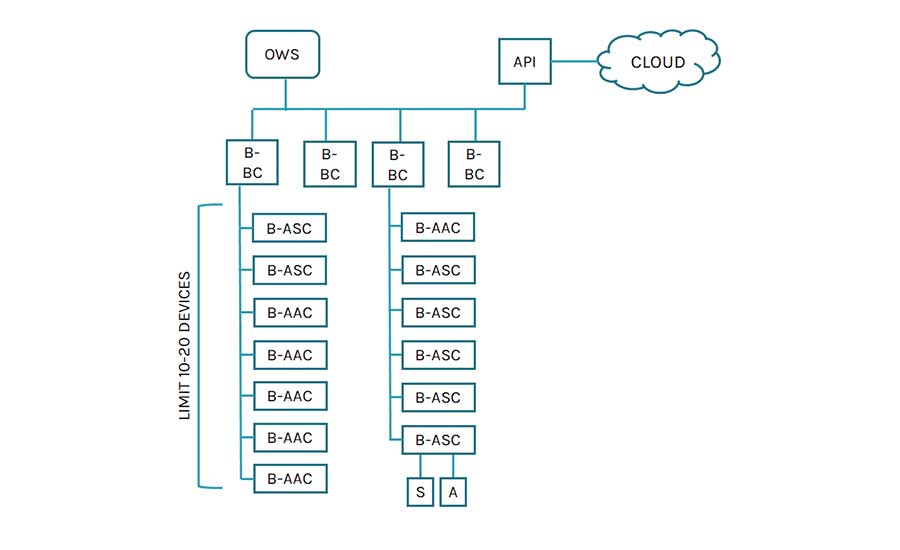 However, the processing speed of the actual equipment would need to be increased to allow for the higher speed of information to benefit the system.

This would create a system that could translate the commands faster through the entire line of connected equipment. It would also allow for more information to be collected from the sensors as the commands would not monopolize the Ethernet cables for long.

Another approach would be to further improve the previously mentioned system by limiting the number of controllers that are connected to the daisy chain by 10-20 units as shown in Figure 3.

This would greatly speed up the time necessary to check into all controllers as there would be fewer pieces of equipment for the command to process through when trying to deliver the sequences.

With these increased speeds, the system could better connect to the IoT with its ability to access more information at greater speeds. This would allow the system to truly take advantage of current optimization and computing power for both the energy and performance of the building.

The hardware of the control systems needs to be allowed to not only send data at a higher speed to activate equipment within a building but also to receive data back in real time to allow the software of the modern system to properly analyze and react to the conditions of the building.

With the emergence of the IoT and the increased capabilities of building analysis software due to the development of AI, it is imperative that the hardware of building control systems be updated to a system setup that will allow for the application of these new technologies.

Only after bringing a building’s control system hardware up to date will the emerging software be fully utilized. The final topic of this article series will continue to explore the IoT and AI as it details the software and sequence of operations updates that are to follow the hardware updates.

Mary Taylor is a mechanical engineer with SmithGroup in Washington. She attended Penn State University where she earned both her Bachelor and Master of Architectural Engineering degrees in 2018. Mary is an Engineer in Training and is currently working towards gaining valuable HVAC design experience in preparation for the Professional Engineering Exam in 2021. She can be contacted at mary.taylor@smithgroup.com.