This website requires certain cookies to work and uses other cookies to help you have the best experience. By visiting this website, certain cookies have already been set, which you may delete and block. By closing this message or continuing to use our site, you agree to the use of cookies. Visit our updated privacy and cookie policy to learn more.
Home » The Design of a Steam Plant is not a Lost Art
Colleges/Universities HVACHealth Care HVACHeating & BoilersHVAC Retrofits

The Design of a Steam Plant is not a Lost Art

Steam plant design is an art that requires the utmost attention to detail and engineering skills.

Approximately six years ago, we visited the manufacturing plant of one of the largest boiler manufacturers in the country. The visit was related to a specific project that required high-efficiency condensing boilers for heating and steam boilers for humidification. At that time and during the discussions with the resident lead engineer for the steam boilers, it was the opinion of one of the authors that the manufacturing and design of a steam plant (either for humidification only or for heating and humidification) is somewhat of a “lost art.” In fact, new designs for large buildings (i.e., 200,000 square feet or larger) and even certain building types (i.e., research facilities) do not even consider steam for heating.

Of interest, however, we have since commenced the design of a new steam plant to provide heating and humidification for a research facility. We have also begun the design for the renovation and/or replacement of three steam plants, two of which are hospital steam plants.

Due to the need for several particular process loads — such as sterilization and kitchen/food prep — steam plants are typically found in hospitals. Steam plants are also found on university campuses. Typically, there is one or more (relatively old) central campus steam plant that delivers high-pressure steam throughout the campus. Regardless of their location and the types of loads they serve, these steam plants are typically 20 years old or older, though some may be more than 30 years old depending on the quality of the maintenance process and availability of funding. As such, steam plant replacement projects are often quite challenging, typically due to the age of the plants and the lack of complete design documents. Such a scenario, however, makes for a very exciting engineering project.

Once a design engineer is assigned on a steam replacement project, it is somewhat tempting to jump straight into the design phase (i.e., selecting/sizing equipment, system diagrams, etc.). However, we believe instead that a proper approach requires a series of steps preceding the design of what type of boiler or size one will specify. These phases should include, but are not limited to: 1) Obtaining as much information (e.g. drawings) associated with the original design intent; 2) Identifying the current loads served by the plant; 3) Asking what the owner desires of the new plant (i.e., redundancy, quality, etc.) and 4) Identifying the impact of the new code requirements on the design of the new steam plant.

Phase one typically involves a series of site visits and meetings with the facilities personnel that maintains the plant. As previously mentioned, the original design drawings are often incomplete. To make matters worse, the documentation for later projects (i.e additions to or alternations of the steam plant) is often also missing. As such, it may be required of the design engineer to spend time surveying the entire steam system and identifying what each line services.

One should not neglect the value that the local maintenance personnel can bring to these projects. In many scenarios, these individuals have been maintaining the plant from the moment it got started and could share valuable insight about the loads the plant is serving and its deficiencies (i.e short cycling of boilers, deficient condensate piping connections, corrosion/pitting). For a hospital, it’s critical that the design engineer analyzes the existing fuel system. This includes, but is not limited to, electrical power (i.e. is the fuel oil system on the life safety branch or on the optional standby branch?), controls, etc. The existing fuel oil system must be capable of supporting the new steam plant.

Once one has identified the loads/equipment served by the steam plant and its current deficiencies, the next step would be to identify the size of these loads. This step will inform the design engineer if the current plant is undersized, oversized, or sized accurately.

After the completion of phase one and two, it’s our recommendation that the design engineer sets at least one meeting with the owner to go over the findings. This approach will give an owner the opportunity to have a better understanding of the scope of the work and the existing conditions. It’s crucial for the owner to understand what items are not included in the original scope of work. For example, and in the case of a hospital, the outcome of phase one and two may be that the existing fuel oil system or boiler controls system is not connected to the emergency power system. This means that the owner must now find the funds to pay for the additional scope such that the new plant is code-compliant. Further, it’s important that the design engineer review the resiliency aspect of the fuel system to determine if it meets the joint commission and NFPA requirements for amount of run time, which is typically 96 hours. Lastly, but not less important, regardless of the building type we recommend, the design engineer must have a solid understanding of the existing chemical treatment system and its capabilities. Poor chemical treatment can have a significant impact on the condition of the existing piping and longevity of the steam system components.

As it relates to hospitals, FGI guidelines, and implicitly ASHRAE 170–2017, require these facilities to “provide heat sources and essential accessories in number and arrangement sufficient to accommodate the facility needs (reserve capacity) even when any of the heat sources or essential accessories is not operating due to a breakdown or routine maintenance.” Per the same document, one can take exception from this requirement,“… if the ASHRAE 99% design heating dry-bulb temperature is greater than or equal to 25ºF…”

The efforts/processes described in the last two paragraphs above have a significant impact on the outcome of a steam plant replacement project. If a plant is at full operational capacity and there is a requirement (i.e either code or by the owner) to have N+1 operational redundancy, and if one cannot fit additional boilers within the footprint of the existing plant, then a building addition to the existing plant may be required. As such, the overall project may be delayed if the original scope of work and budget associated with the steam plant replacement did not include the addition and/or enlargement of the existing steam plant room to house more boilers.

After the completion of phase four and a clear scope of work has been defined, the design engineer has the minimum amount of information required to start the design of the new steam plant. 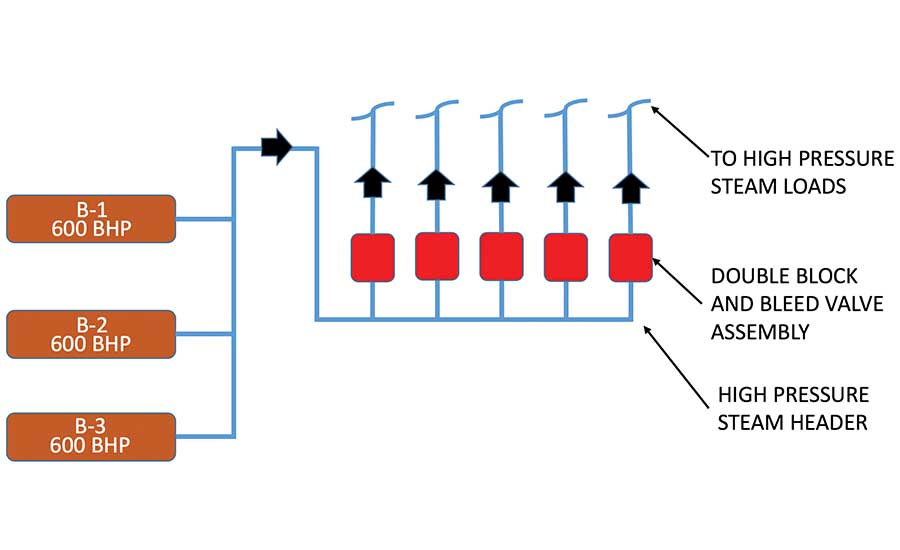 In the case of a steam plant that needs to deliver high-pressure steam (i.e 100 psig), it’s our recommendation to provide a main steam header (as shown in figure 1) downstream of the steam boiler and upstream of any loads and/or pressure-reducing stations. Further, double block and bleed isolation valves should be provided for each load. 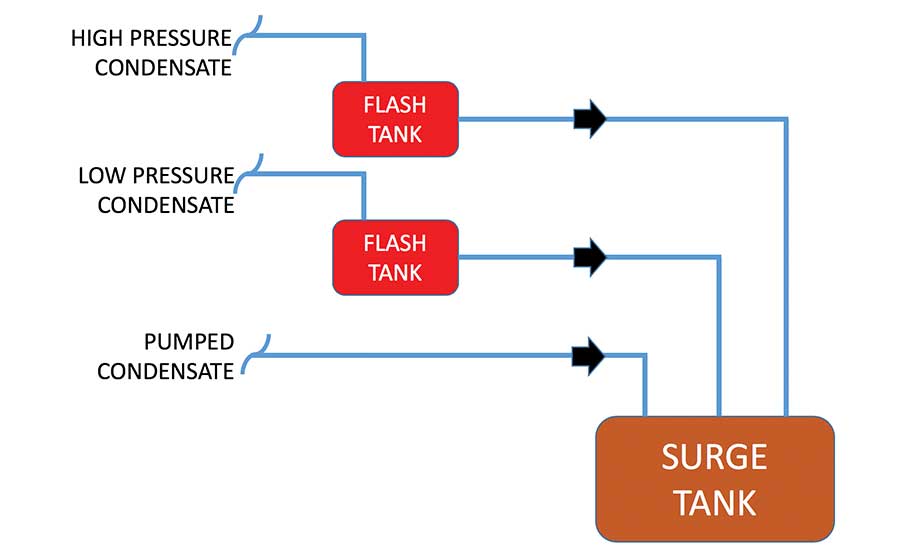 There are many books and guidelines written about the design and operation of steam plants due to its complexity. As outlined throughout this article, there are many code requirements and factors that impact steam plant design. Despite the many challenges steam plants present, the design of a steam plant is not a lost art. It’s simply an art that requires the utmost attention to detail and engineering skills. Rosemary Hwang is a mechanical engineer with SmithGroup in Washington, D.C. She attended Penn State University, where she graduated with an integrated M.A.E/B.A.E of architectural engineering degree in 2016. She is working toward gaining valuable HVAC design experience and is expected to take her Professional Engineering exam in 2019. She can be contacted at rosemary.hwang@smithgroup.com. Kevin Andreone is a licensed professional engineer with SmithGroup in Washington. He attended Penn State University, where he graduated with a B.A.E of architectural engineering degree. Kevin is a LEED AP with experience designing various HVAC systems, including commercial buildings, laboratories, and health care facilities. He can be contacted at Kevin.Andreone@smithgroupjjr.com.