Start with the basic mission, then move on to HAIs, air changes, and other challenges in this singularly demanding environment.

HVAC systems provide comfort and quality air for patients, staff, and visitors in hospitals. Comfort is generally determined by temperature, humidity, and air speed. Air quality is generally defined by particle count — both organic and inorganic. Current design codes and standards specify precise levels of filtration, air change rates, and outside air for dilution, and vary for each space in a hospital. These are the minimum standards used by engineers to design hospitals. Of course, over time the performance of the HVAC is determined primarily by the operation and maintenance of the systems and the activities of the occupants.

ASHRAE is recognized as the world leader in establishing standards and training for the design of HVAC systems. The standards most frequently used in healthcare engineering are:

The American Society of Hospital Engineers (ASHE) is part of the American Hospital Association. ASHE publishes guidelines for the operation and maintenance of health care facilities. Various clinical associations also publish guidelines that occasionally affect hospital HVAC design. ASHRAE is working to coordinate and incorporate the HVAC portions of these guidelines into Standard 170. These associations include: 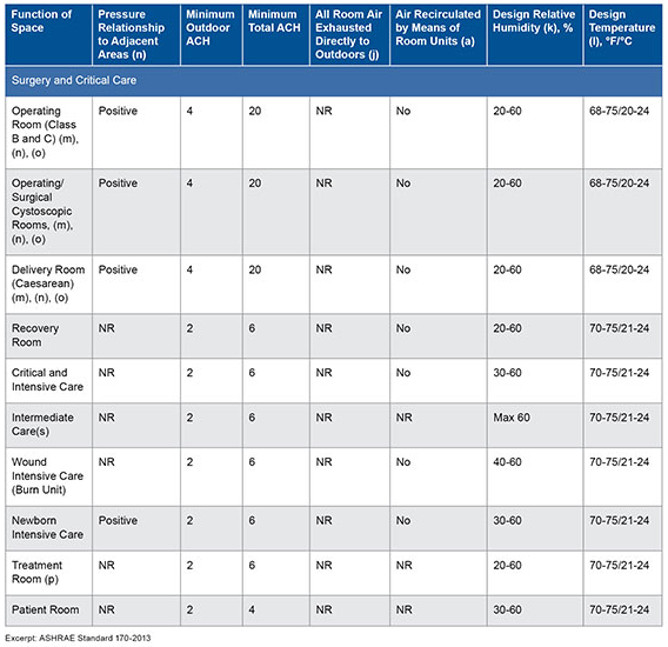 ASHRAE 170 is on continuous maintenance and addenda are issued several times a year. Figure 1 is an excerpt from Standard 170. As shown, it calls out the pressurization, rate of dilution with outside air, supply air rate, whether or not the air may be recirculated, humidity range, and temperature range.

Comfort is different for each person and highly dependent on clothing, age, health, activity, temperature, humidity, and airflow rate. Standard 55 bases comfort on surveys of occupants in a variety of conditions and defines “comfortable” as when 80% of the occupants are satisfied.

Standard 170 is a minimum design guide with the intention of designing systems that will “provide environmental control for comfort, asepsis, and odor in health care facilities.” Surgeons often request temperatures below Standard 170 (68ºF). This can create problems when the HVAC system is designed to the minimum. Prudent design with chilled water will allow temperatures as low as 63ºF in operating rooms.

The demand for low temperature is particularly common in orthopedic and cardiac operating rooms where lengthy surgeries often take place. The gowns, caps, gloves, masks, etc.  can overheat the surgical team. Unfortunately, the OR support staff can often become uncomfortably cold when the temperature is lowered.

These conflicting desires often cause difficulties for the design engineer and the operations personnel. It is the job of the designer to provide a system that can meet virtually all of the disparate temperature and humidity requests. The hospital engineer is usually the one caught in the middle of competing requirements.

Another side effect of the surgeons demanding low temperatures is the impact on the patient. Most clinicians and anesthesiologists feel that lower temperatures have an adverse impact on patients. To mitigate these adverse effects, surgeons will often ask that the HVAC system be able to quickly raise the room temperature as soon as the surgery is complete. This need for a speedy temperature recovery also affects the HVAC design.

Even more important than comfort in a hospital is air quality. Hospital-associated infections (HAI) result in many lives lost and cost the U.S. billions each year. While the estimates vary, most experts agree that airborne sources of infection are responsible for 5 to 15% of HAIs. These are estimated to cost approximately $500 million per year. It is the task of hospital HVAC engineers to mitigate the incidence of airborne HAI.

A simple, conceptual equation for the probability of infection in in Figure 2.

Many factors affecting infections are unrelated to HVAC, such as handwashing, visitors, staff, surfaces, cleaning, and the level of defense of the patient. Many engineers are not aware that their designs can and will impact all of the variables in Figure 2.

Generally, bacteria and viruses ride on larger particles and aerosols. These might be skin particles, dust, sneeze/cough aerosols, spores, and even insects (mites). The HVAC system can reduce the density of particles in the room by introducing clean air. As shown in Figure 3, the rate of air changes of clean air is directly related to the residence time of the particles (the “fly”) in the room. In general, the greater the air change per hour (ACH), the fewer infections.

The HVAC system is also used to move dirty air out of the hospital in a logical path, as shown in Figure 4. The idea is to design the system so that the cleanest air is introduced to the operating rooms and other sensitive areas, then moved via pressure difference to less clean areas and eventually out of the hospital. 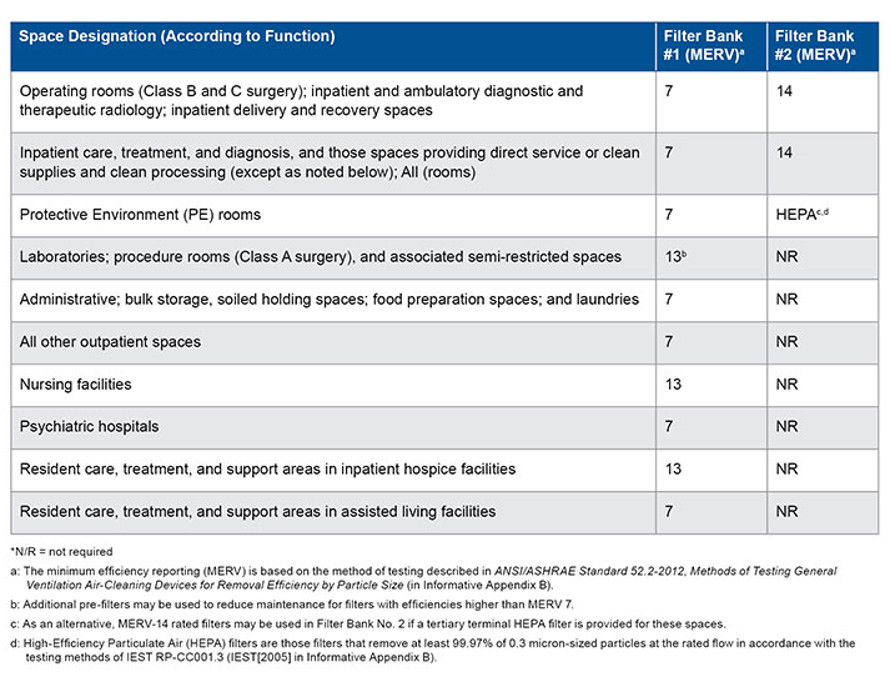 Another way to reduce dosage is by recirculating air through good filters. In many environments, filtered air is cleaner than outside air. Figure 5 shows the required minimum filter efficiencies for different parts of health care facilities. MERV is a measure of filter efficiency with a scale of 5-17. High Efficiency Particle Arrestance (HEPA) filters provide the best filtration and may be as efficient as 99.9995% at the most penetrating particles. As shown, MERV 14 is the minimum for the final filter serving operating rooms.

The likelihood of infection is also affected by the site impinged by the particles. Particles landing on the skin are much less likely to cause infection than ones deposited in open wounds. The means of delivering clean, filtered air may affect infections. As shown in Figure 6, clean air is directed into the room through laminar diffusers. These are large metal arrays perforated with small holes. The intent is to deliver a gentle “waterfall” of clean air over the table. The area directly below this diffuser is referred to as the “sterile field.”

Air is blown from the diffuser at a low rate to reduce turbulence. Anything that disrupts this stream of sterile air reduces its effectiveness. Disruptions are caused by the surgeons and staff, objects (light booms, tables), thermal plumes (markedly hot or cold air), and air currents caused by devices, personnel, and doors.

Ideally, air is supplied at the ceiling and removed near the floor, in an effort to wash the patient and staff with clean air and remove “dirty” air in one linear flow path. 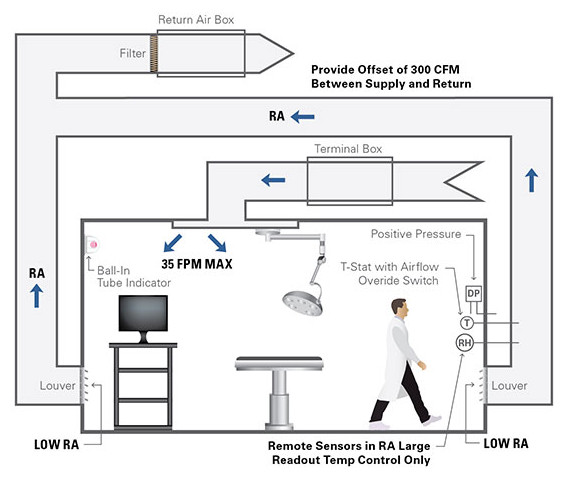 Although limited, the HVAC system has some effect on the virulence of microorganisms. Inside the AHU, UV lights will kill bacteria and algae growing on the wet surfaces. There have been some efforts to install UV lights in ductwork, but the high speed of the air makes this ineffective. Some hospitals are now experimenting with portable UV lights which they bring into unoccupied operating rooms to bathe the room in UV and kill microorganisms. Others have experimented with ozone.

There is much debate about the role of humidity in infections. It is generally accepted that the maximum long-term room humidity should be less than 60% in order to minimize the growth of mold and other organisms. The minimum humidity is controversial. For decades, it was accepted that in operating rooms the minimum should be 30 to 35%. In the past few years, however, ASHE has recommended the minimum be lowered to 20% for short-stay areas (such as operating rooms). There is good evidence that low humidity has adverse effects on humans over the long term. Unfortunately, there is no agreement on the exact length of time. Some point out that flu season coincides with low winter humidity, but it is unclear if low humidity over hours or even days is harmful. The psychrometric chart in Figure 7 shows that a constant supply of air at 48ºF with 48ºF dewpoint (saturated) will meet all normally recommended ranges of humidity in operating rooms. Note that some doctors will require lower operating room temperatures than recommended by ASHRAE, in which case a lower dewpoint temperature is required. 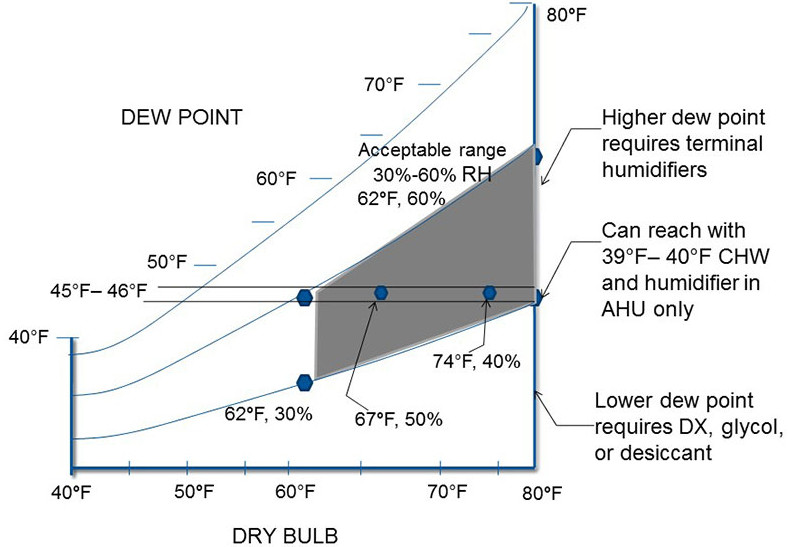 FIGURE 7. OR temperature, humidity, and dewpoint.

The HVAC system in a hospital is composed of numerous devices that must act in unison to deliver the desired results. The system generally consists of chillers and boilers, air handlers, ductwork, terminal boxes, and thermostats. All of it is controlled by a BAS. The implications of infection mitigation affect the engineering design of humidification, outside air rate, chilled and hot water temperature, airflow rate, filtration, air distribution, and pressurization.

The greatest concerns are in summer, especially in non-arid locales, including much of the country east of Colorado. If the dewpoint of supply air exceeds 48ºF, it will be impossible to provide the low temperatures demanded by orthopedic surgeons while maintaining the relative humidity below 60%. The practical impact of that is that hospital chilled water (CHW) systems must provide water at a temperature lower than 41ºF. This low temperature CHW will allow the air handlers to remove the moisture from the air via condensation, allowing the supply air (SA) dewpoint to reach 48ºF. When SA is higher than 48ºF, and the operating room temperature is set below 64ºF, the relative humidity will exceed 60%. Misguided attempts to save energy by raising CHW temperature often result in excessive relative humidity.

Conversely, in winter the air must be humidified to maintain higher than 20 to 30% rh. This is commonly accomplished by blowing steam into the supply air. Of course, this must be controlled carefully to avoid condensation in the ductwork. Poor control and/or the installation of humidifiers can often result in condensation or an “It’s ‘raining’ in my OR” situation.

Operating room air handlers have two filters: pre- and final. It is paramount that the final filter assembly be installed properly to prevent air bypassing the filters. This requires rigid steel supports and tight fitting gaskets. The filters must be changed as needed and kept dry.

Saving energy has monetary, environmental, and moral appeal. The test of a high-performing hospital HVAC system can be measured by the following criteria:

Motivated primarily by energy savings, some in the industry advocate eliminating the prescriptive ACH rates in favor of controlling the ventilation rate by real-time particle counts. This may be reasonable if accurate, reliable, and affordable particle counters and control systems are available.

Dan Koenigshofer is the vice president for health care engineering at Dewberry in Raleigh, North Carolina. He has more than 40 years of engineering and project management experience, specializing in master planning, troubleshooting, and solving engineering problems in health care facilities. He enjoys educating others via his practical experience in health care design and operations. His article, “Do Outside Air Economizers Make ‘Cents’ in Hospitals?” was published in the November 2018 issue of the ASHRAE Journal and was named the ASHRAE Journal best article of the year.

Pavel Likhonin is a project manager and senior mechanical engineer in the Raleigh, NC, office of Dewberry. He is active in ASHRAE and a member of the national ASHRAE Technical Committee 9.6 Health Care HVAC and the S-170 Committee on Ventilation in Health Care. He is currently leading the effort to rewrite a chapter on Health Care HVAC for the ASHRAE Handbook — Applications as a TC9.6 Handbook Subcommittee vice chair. He holds a bachelor’s degree and a master’s degree in architectural engineering from Penn State University.