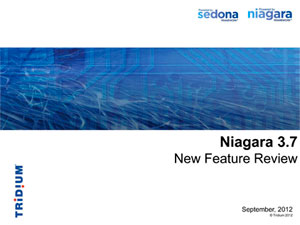 Tridium has announced that the latest version of NiagaraAX Release 3.7 is available.

Security is very important to our customers, so with this release Tridium has included Workbench tools for certificate management as well as expanded SSL/TLS capabilities. Default settings have been updated to ease the amount of configuration required to secure a system, in line with the "secure-by-default" philosophy.

NiagaraAX 3.7 has improved with the introduction of Workbench themes, new photo-realistic graphic libraries, and several mobile applications that come standard with the Framework. A new JavaScript API called BajaScript has also been created to allow developers to create their own mobile applications in addition to the ones provided by Tridium.