Ventilation and Outside Air Considerations in Group R-2 Projects

Is it ever acceptable to meet the building codes halfway?

My firm recently completed the design of an off-campus student housing project. This project converted a 21-story, high-rise office building into an apartment-style student housing facility with one to five bedrooms per apartment. The existing building had a very good infrastructure consisting of water-cooled chillers, chilled water risers, and a centrally located mechanical room on each floor. To provide outside air to each floor, we utilized an abandoned elevator shaft adjacent to the mechanical rooms to route the outside air duct down to each floor. Each of the existing VAV air handlers in the mechanical rooms was then replaced with a 100% outside air unit to provide dehumidified air to each apartment.

More recently, we had been asked to convert an eight-story office building into apartments. This conversion proved to be a lot more difficult than the 21-story conversion. The eight-story building was listed on the historic register, lacked any centralized mechanical spaces or roof space for any additional equipment, and had a budget that would not allow the addition of central mechanical rooms. As housing projects were being designed all around the country, we decided to check and see how other engineers were addressing outside air on similar projects in South Carolina, North Carolina, and Georgia. Through FOIA requests, we were able to review a number of Group R-2 projects.

Our primary concern focused on four areas of the code. The first was related to natural ventilation, which is often used to provide code-required ventilation air for apartments. The 2015 IMC Code, Section 402.1, states “Natural ventilation of an occupied space shall be through windows, doors, louvers, or other openings to the outdoors. The operating mechanism for such openings shall be provided with ready access so that the openings are readily controllable by the building occupants.”

Section 402.2 continues, “The minimum openable area to the outdoors shall be 4 percent of the floor area being ventilated.”

It’s important to note that the code commentary states it’s up to the designer to place the openings to “induce airflow through the space.” Even more important is how the code requires interior spaces, or spaces that do not have openings directly to the exterior, be addressed. Section 402.3 requires adjoining spaces to have unobstructed openings sized at a minimum of 8% of the floor space of that space and not less than 25 square feet. The obvious reason for such a large opening appears to be for the purposes of allowing the transfer of the ventilation air from the exterior space with the openings in the exterior walls into the interior space.

The second area of concern was the requirement of the 2015 IBC Code, Section 1203.1, in which the air infiltration rate with natural ventilation must provide a minimum amount of air changes within the dwelling unit. The code states that, “Where the air infiltration rate in a dwelling unit is less than 5 air changes per hour when tested with a blower door at a pressure of at 0.2” w.c. (50 Pa), in accordance with Section R402.4.1.2 of the International Energy Conservation Code, the dwelling unit shall be ventilated by mechanical means in accordance with Section 403 of the International Mechanical Code.”

It’s interesting to note that as recent as 2009, the IBC did not require any testing to verify infiltration rates (although testing was recommended in the code commentary), and the North Carolina Code still does not require testing.

Lastly, the 2015 IMC Code, Section 403.3.2.1, requires that mechanical ventilation air be continuously provided except where automated controls provide ventilation air for no less than one hour out of every four hours. In addition, the average outdoor airflow rate over that four-hour period shall not be less than is required by Equation 4.9.

The results of our investigation into the design of several Group R-2s by engineers in South Carolina, North Carolina, and Georgia surprised me. The following are examples of five of the projects we reviewed.

Design No.1: Natural Ventilation via Window and Door Leakage

The code states that when the “air infiltration rate in a dwelling unit is less than 5 air changes per hour ... the dwelling unit shall be ventilated by mechanical means …”

When I asked several building officials whether or not they had ever witnessed a room pressure test or seen a room pressure test report, I received no response or was told this was the responsibility of the engineer of record (EOR). Considering the consequences of not passing the pressure air test, I’m not sure the EOR would ever want the test to be performed. If the test fails, there is no simple or inexpensive solution except possibly reducing the effectiveness of the door or window seals to increase the leakage rate. I wonder how that new one-story apartment building I saw under construction with its new energy-efficient windows will make out when the apartments in that building are tested? What would be the solution if the dwelling units were tested and did not pass? 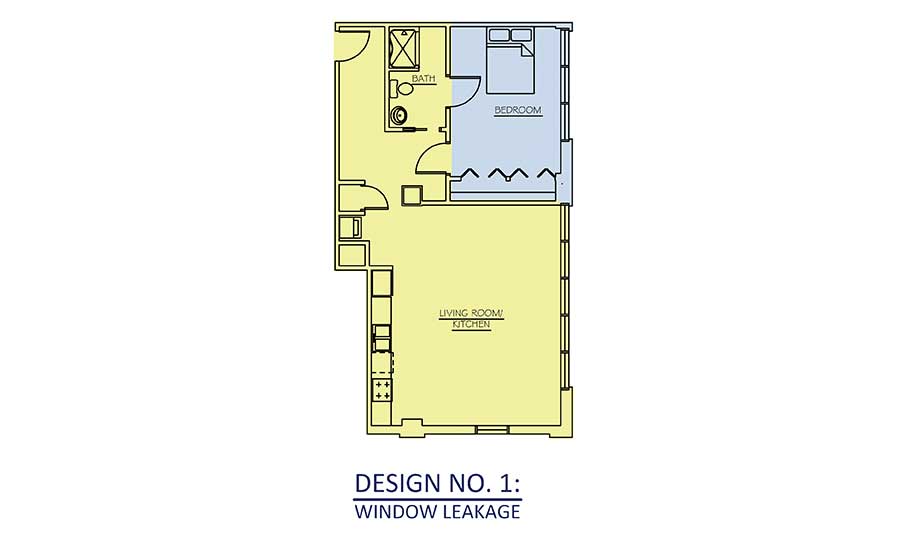 Design No. 2: Conditioned Outside Air Ducted Directly to the Space

Conditioned outside air in the quantity required by code is supplied directly to the main living space. The bathrooms are constantly exhausted, and the kitchen area exhaust is controlled via a wall switch. While the outside air is continuously introduced into the apartment, it does not seem like the code-required ventilation air will ever be provided into the bedrooms. This is one of the scenarios argued by my colleagues to be an acceptable installation regardless of where the ventilation air is introduced into the space. 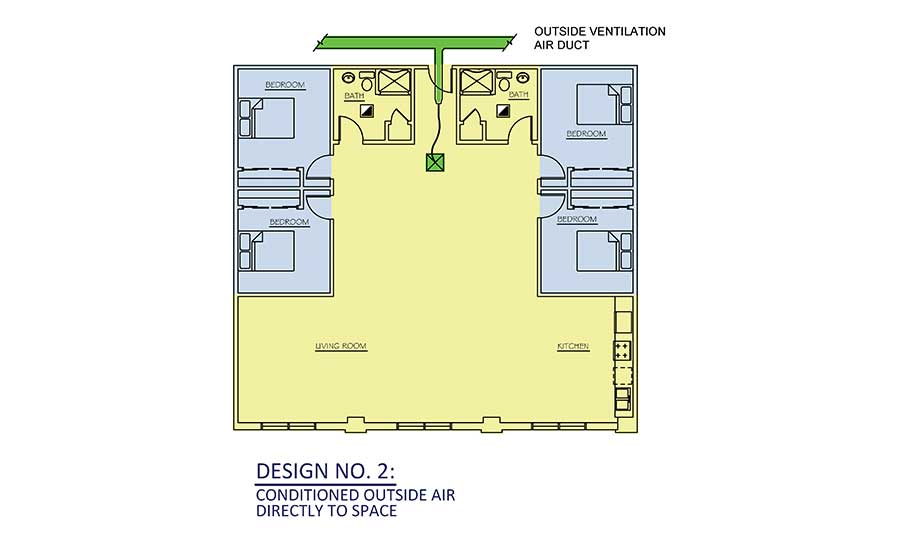 Design No. 3: Conditioned Outside Air Ducted to One Air Handler 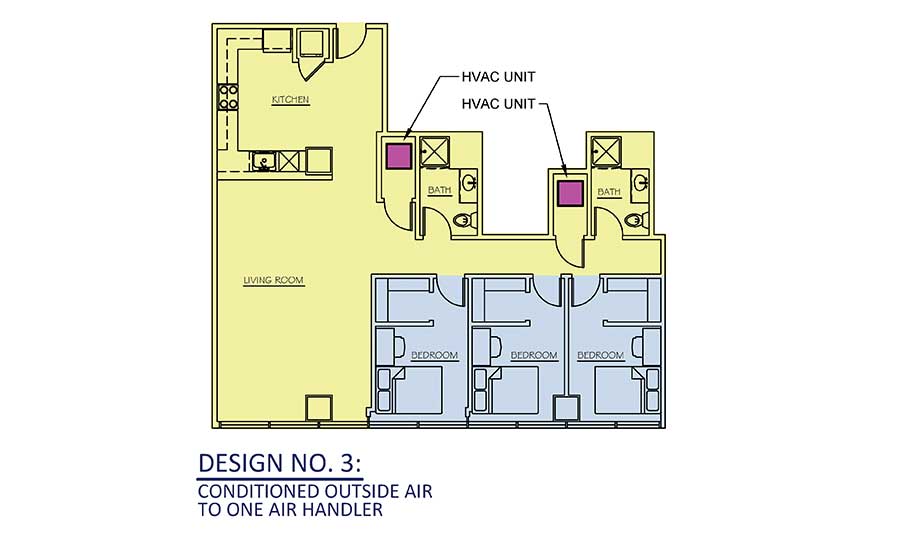 Figure 3. Conditioned outside air to one handler

Design No. 4: Unconditioned Outside Air Riser

This outside air riser was designed to bring outside ventilation air to each mechanical closet where the outside air duct was tied into the HVAC unit’s return air plenum. The intent was when the HVAC unit was energized, outside air was pulled into the unit, and when the HVAC unit was off, the unit would not pull in any outside air. While the duct to each HVAC unit was sized, it was interesting to see on the design documents that there was a note tagged to the balance damper telling the contractor to balance the outside air to meet ASHRAE requirements. In my opinion, there are so many potential problems with this design. Besides humidity concerns and the issue of providing outside air for one hour out of every four hours, I’m pretty sure that some of the units will be pulling in air from another floor versus pulling in outside ventilation air. 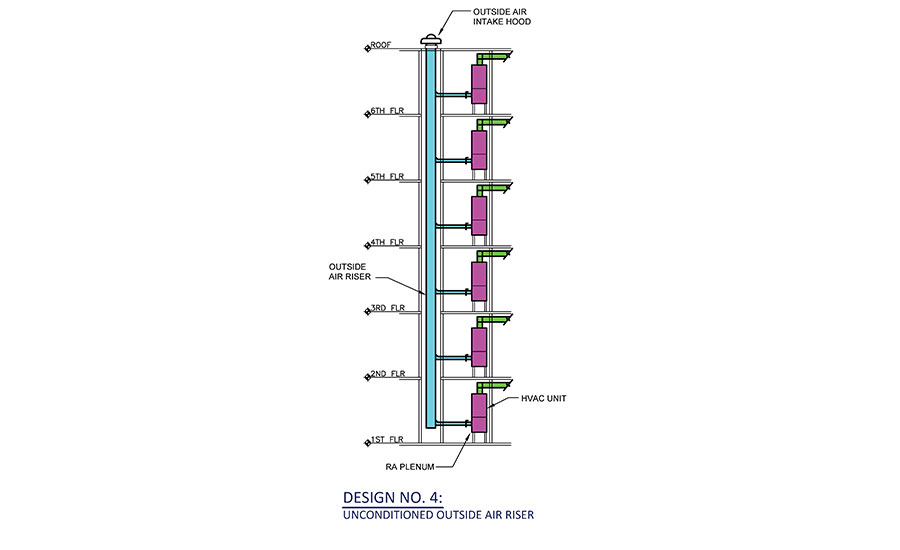 This was actually a project our firm unsuccessfully interviewed for a couple of years ago. This existing high-rise student housing building had a history of mold and mildew for many years. Eventually, the college closed the outside air dampers to the chilled water and hot water fan coil units in each room. Our team presented a design to provide a dozen or so outside air risers that would run from several new 100% outside air units on the roof down through the building to each room or pair of rooms. The risers would introduce dehumidified air at a neutral temperature directly into each room. This involved a fair amount of slab demolition and construction of many new shafts. 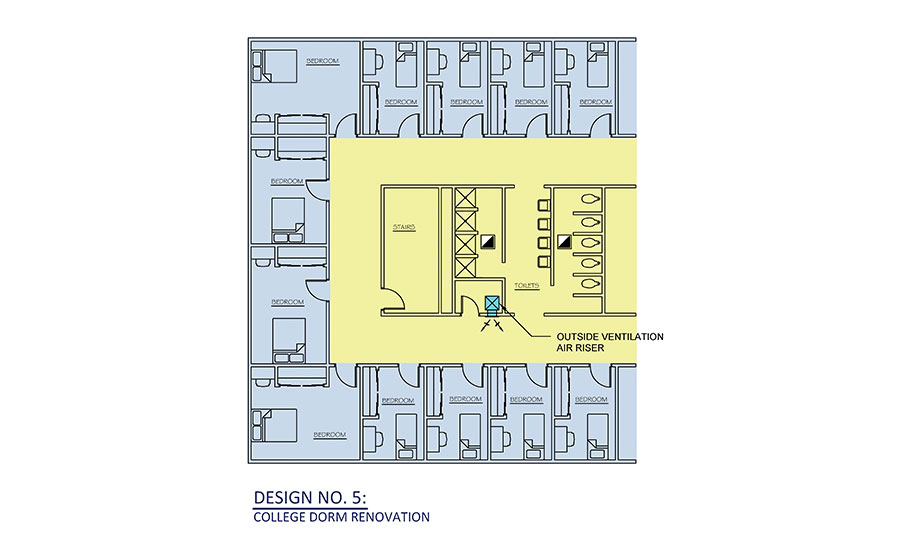 Apparently, the college was not overly enthusiastic about our approach. The selected team implemented a design that inserted outside air at two points in the corridor on each floor. As you can see from the floor plan, with centralized bathrooms, the ventilation air never had a chance to make it into the students’ rooms. I think even my colleagues who advocated for ventilation air to be delivered into the dwelling space would not go along with this design.

After reviewing a dozen or so designs, including the five presented in this article, as professional engineers, we have to ask the question — what is going on with the design of ventilation air for R-2 facilities? What are the engineers of these particular designs thinking? Where are the building officials in all this? I assume that each design had to be reviewed by a permitting department or building department. Several of these projects are located in major metropolitan areas. Maybe others see outside ventilation design differently and don’t have as much of an issue with some of these designs as we do. Or maybe meeting the code requirements half way is becoming more acceptable.

Dan E. Reider, P.E., is manager of mechanical engineering, Buford Goff & Associates Inc. He has designed a wide variety of projects ranging from major hospital and correctional facilities to high-rise office buildings, performing art centers, and educational facilities. He is a certified P.E. in Georgia, Missouri, North Carolina, South Carolina, and Virginia, and earned his mechanical engineering degree from the University of South Carolina. Contact him at Dan.Reider@bgainc.com.