A Missouri college called late last fall with a problem. Its heating system, a central campus heating water boiler plant with two pumped loops and three distribution branches, had developed a leak in the loop to the library building across the quad. The heating system and underground piping were 50 years old. The college had a leak in another section of piping two years prior and replaced a part of the underground heating water loop at a cost of nearly $350,000. The college wasn’t looking forward to another large expense for repairs to its aging systems.

A 1990 addition to the campus that included a student center and bookstore with connecting links to the two adjacent buildings could have damaged the piping that ran adjacent to the addition and under the connecting link to the library. A bedded planting area alongside the addition and connecting link that hung above the underground piping added a nice aesthetic. The location of the planting area, however, accelerated the corrosion of the piping as it maintained increased moisture levels and plant fertilizer around the outside of the pipes.

The 1968 underground piping was manufactured by Trinity Valley Iron & Steel Co. and was made from asbestos cement insulated ductile iron pipe. While this installation occurred after the Clean Air Act of 1965, it was installed well before the product was banned. The asbestos-containing insulation material is non-friable and poses little risk of exposure to workers or the public, so the only abatement would be the material inside the library building where the piping came up through the floor. The piping routed underground from the plant to the library would be abandoned in place. 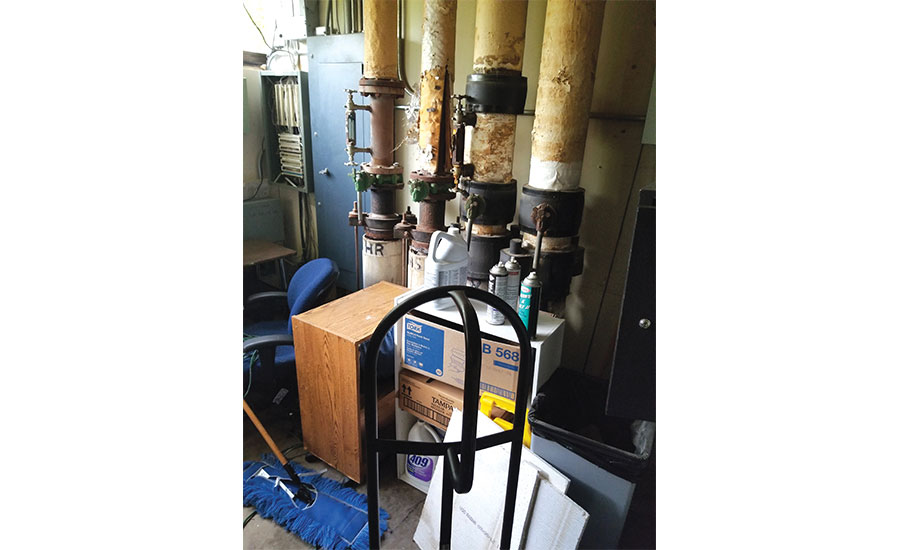 Replacing the 600 feet of pipe length between the boiler plant and library would be a costly undertaking, so we investigated adding boilers to the library building as a decentralized plant. A centralized plant offers a) all equipment in a centralized location for easy service that is segregated from the general public, and b) a potential to change the fuel source (natural gas, fuel oil, or electric). A decentralized plant eliminates distribution pipe heat losses (about 28 Btuh/ft).

For the decentralized plant to be successful, it must operate at a higher efficiency than the central plant. Engineers must assume the leadership role in business and interprofessional relations to ensure the new systems are more energy efficient than the ones they replace and provide the same or better performance. In this case, the existing central plant boilers were 84% efficient. The college wanted, and we recommended, some level of redundancy, so we investigated options of multiple boilers or an array-style boiler. 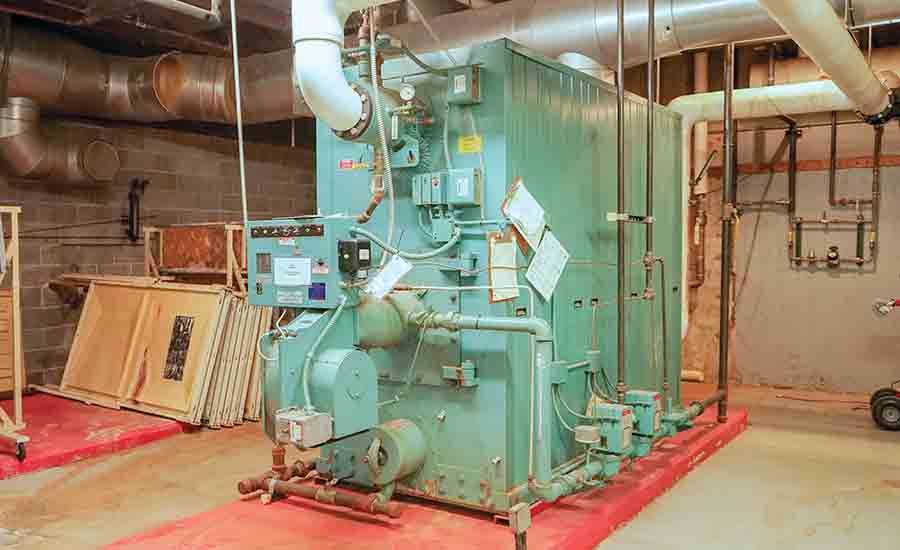 A multiple boiler installation would require more floor space and cost more to install (double the piping connections, double the flue and vent connections, double the electrical connections, and an increased number of control points). An array-style boiler with three 500-MBH modules was selected. It offered 15:1 turndown, NOx emissions of 9 PPM at 3% O2; internal controls that prevent the heat exchangers from excessive temperature rise; and low noise operation (each module <48 dB), which is important in a library. The boiler size was such that two of the three burners could provide more than two-thirds of the total combined peak loads. The boiler is direct-vented to the outdoors to provide sealed combustion. Water and sanitary drainage were available at the nearby restrooms, and natural gas was also available at the building. So all necessary utilities were present. The boiler room was sized so that a future, second boiler could be added if the college wanted to have a fully redundant system or to feed heating water from this plant to the adjacent student center. 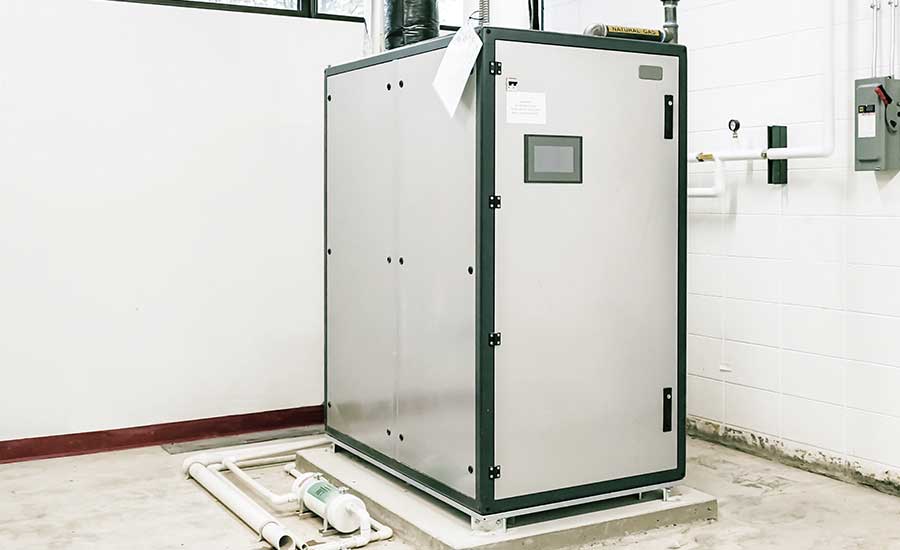 A 295-square-foot, one-hour boiler room was constructed adjacent to the existing air-handling room on the second floor to locate the boiler and accessories near the largest load. At this size, the boiler room only required one door (International Building Code requires two doors when a room is 500 square feet or larger and the boiler input is greater than 400 MBH). The one-hour room construction was required since the building was not protected by a fire suppression system. Location on the second floor allowed access to grade level through a corner of the library. It also allowed installation of sanitary drain piping without cutting the floor slab and replacing flooring. A 120-gallon heating water buffer tank helps smooth out the load and reduces boiler cycling with the nearby AHUs and reheat loads.

As our project was not changing or addressing the building load, the heating water design had to remain as the original design set point of 160°F; however, with updated temperature controls and programming, we incorporated an aggressive reset schedule to improve operating efficiency whenever conditions allow. This means that on the coldest days, the full-load efficiency may be only 88%, but as the outside air temperature moves upward, the heating water temperature may be reduced, and boiler efficiency will improve to about 93% in actual conditions. St. Louis has about 5,260 hours per year where temperatures are below 65°F. The reset schedule allows about a 17% energy savings in annual energy consumption from a fixed heating set point. The new boiler improved efficiency of about 4% over the central plant boilers, and the decentralized plant eliminates the heating loop losses of about 3%. Thus, the college should save about 24% of its heating energy costs for the library building. 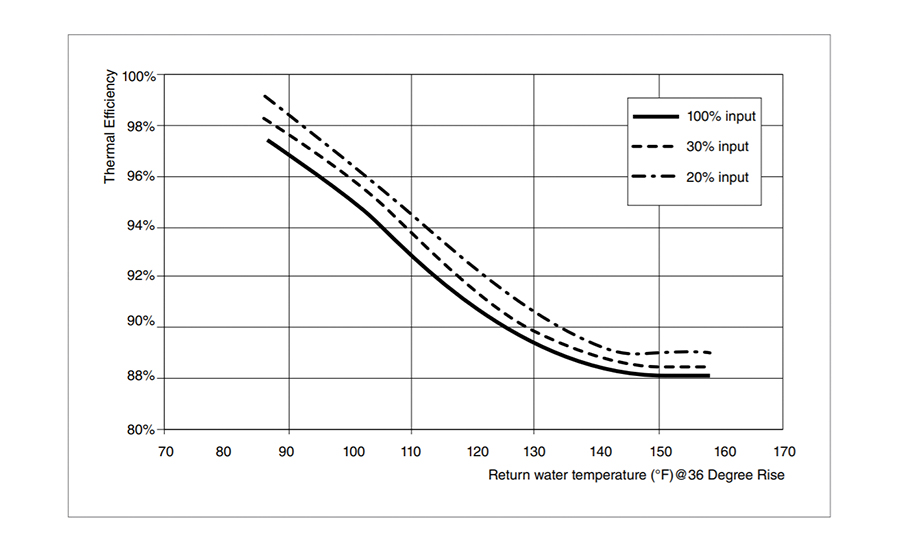 An architect was used to design the boiler room. A structural engineer was used to check the existing structural support and to design miscellaneous steel supports for equipment and piping. A further step would be to commission the building and boiler operation; however, this task was turned over to the contracted temperature control service company as part of its ongoing service work. 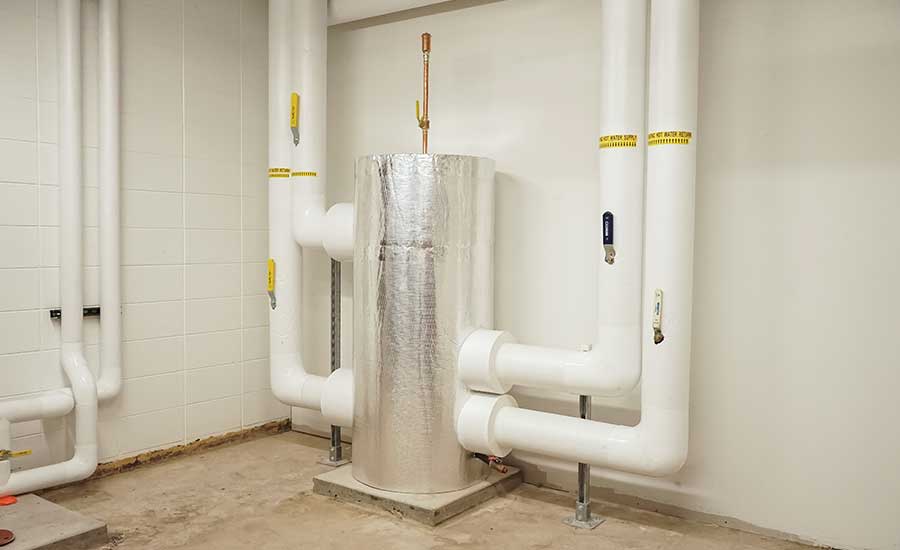 Failures are random and cannot be predicted. This one came late in the fall and threatened the building comfort. The college used a few temporary heaters and fans to transfer air from adjacent buildings through the connecting links to the library building to maintain at least some level of comfort. The salesmen expedited deliveries, and the contractor worked extended days and overtime. The result was a project that came together nicely. The total project cost was less than $275,000, including consulting fees, and was completed in less than four months. Teamwork pulled the project together and the college now has a plan for additional decentralization of the heating plant.

With careful study, engineers can evaluate the options and help owners make energy-efficient improvements to their operation, even when disaster adds pressure to the project.

Chuck Dale-Derks, P.E., is a principal at McClure Engineering, a mechanical and electrical consulting engineering firm dedicated to the development of innovative solutions to unique engineering problems.