This website requires certain cookies to work and uses other cookies to help you have the best experience. By visiting this website, certain cookies have already been set, which you may delete and block. By closing this message or continuing to use our site, you agree to the use of cookies. Visit our updated privacy and cookie policy to learn more.
Home » The Future of Comfort Depends on the Use of Less Water-Intensive Equipment
Commercial HVACCooling & ChillersHVAC Design/Construction Process

Most engineers focus on improving energy efficiency to reduce energy consumption. There is, however, another important component that impacts energy use and that has, to this point, been largely ignored — water consumption. Water and energy are invariably intertwined into what is referred to as the energy water nexus.

Water is needed for drinking and irrigation but also for production of energy and cooling. As global clean water levels fall, demand for cooling and energy consumption rises. In states such as Texas, California, Arizona, and the rest of the Southwest, water scarcity is a hotly debated and prominent topic. On a worldwide scale, water usage is outgrowing the population1. To make a significant impact on the energy-water nexus, water consumption must be considered from two perspectives: the building and the power source.

Within the average office building, roughly one-third of average water consumption can be traced back to the operation of HVAC equipment. Not every HVAC system is made equally in terms of the amount of water it consumes, as some designs are much more demanding than others. With a commercial chiller able to last 15-20 years, and air conditioning now an essential utility, it’s important to consider the long-term impact that the system designs we implement today will have on our water-scarce future.

The majority of large commercial buildings use water-cooled chillers to provide air conditioning, which require large quantities of water to operate a cooling tower. The cooling tower is used to reject heat by evaporating cooling. According to colorodowaterwise.org, the rule of thumb for evaporation water loss from a cooling tower is that 3 gallons of water are evaporated per minute (gpm) per 100 tons of cooling load placed in the tower2. This doesn’t even account for drift — water that naturally escapes the system in the form of mist — or blow down — the removal of dissolved solids by draining cooling tower water with high concentrations.

From a water consumption perspective, an air-cooled chiller is preferred over a water-cooled variety because it does not consume water at the site. Heat is instead rejected through ambient air. Pairing an air-cooled chiller with thermal energy storage allows for the building to shift the creation of cooling to cooler nighttime hours. This increases the energy efficiency of the air-cooled chiller and can help offset additional energy and water at the source — the power plant. On net, the combination of local site consumption plus conventional power plant water consumption for an air-cooled, ice-making energy storage chiller is one-fifth that of its water-cooled equivalent (0.5 gpm per 100 ton/hr) (Figure 1 and Figure 2).3 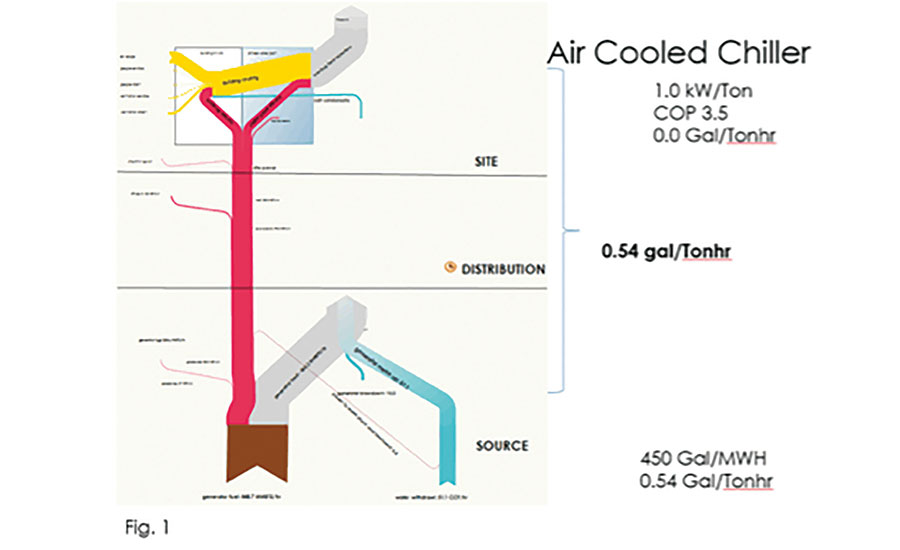 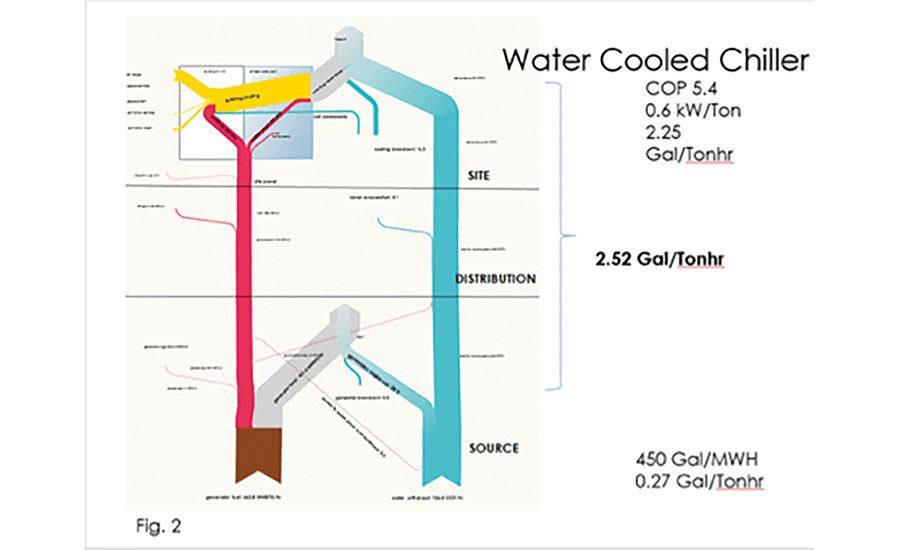 It’s no coincidence that large power plants are located near rivers, lakes, and on the coast as the equipment used to produce power often requires a vast supply of water for cooling. This reliance on water for cooling can be clearly illustrated by what occurred in 2012, when severe drought affected more than one-third of the U.S. The limited water availability forced constraints on the operation of some power plants and other energy production activities.4

To further illustrate this point, according to the Union of Concerned Scientists5, the amount of water that power plants use for cooling each minute is roughly equal to the amount of water that flows over Niagara Falls each minute, multiplied by three. The water used to cool equipment can’t simply be put back into the lake, river, or ocean that it was pulled from as the heat of the water would have serious environmental impacts. Instead, large cooling towers are built so that water can be sprayed within the towers. As evaporation occurs, water is cooled so that it can be returned to the environment.6

Since the water necessary for energy production must be cooled, the time of day when energy is being used from utilities also has a big impact on water usage. Cooling equipment is much harder during the peak of the day, when outside temperatures are at their highest, especially during summer months when energy demand is at its highest. During summers in Austin, Texas, approximately 40% of water consumed is utilized within cooling power plants. The seasonal peak in demand is due mostly to the creation of instantaneous cooling through traditional non-storage air conditioning practices. During these times, peaking power plants or “peaker plants,” which only run during times of high demand, are generally the least efficient and are brought online as well. Shifting cooling loads to nighttime hours avoids the need to bring peaker plants online.

From a water and energy perspective, reducing periods of high demand is extremely important. It’s much more efficient for utilities to create electricity at night when demand is low and ambient temperatures are cooler. Base-load power plants run with heat rates in the range of 8,000 Btu/kWh, while peaking plants operate in the 11,000 Btu/kWh range (+/- 2,000)7. Shifting cooling load consumption to nighttime hours can save source energy and water while suppling the same unit of energy to buildings. In addition, wind power outputs typically lull in the middle of the day, during times of peak energy demand, and increase during hours in which a typical office building is not operating (Figure 3).8 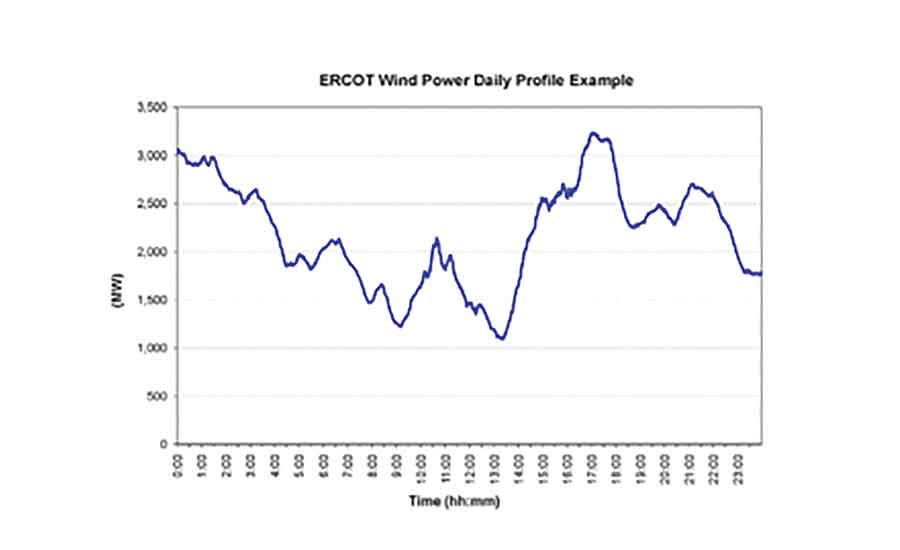 Shifting energy consumption lessens water consumption by making more use of wind energy. Reductions in water usage can be significant, especially in a state like Texas, which has an installed capacity of 2,883 MW of electricity from wind turbines. This renewable resource also does not require any water to operate.9

Another water-conservative power solution involves solar energy. Air-cooled chillers and thermal energy storage can be paired with solar arrays. Within a microgrid or zero-energy building, nighttime power or solar power generated on-site can power the air-cooled chiller to create cooling. When the sun is not available, the storage kicks on.

Impact on Our Water Scarce Future

By examining energy sources and how energy is generated, it is easy to see that energy usage related to air conditioning is a significant component in both the water and energy consumption problem. Adding thermal energy storage alongside air-cooled chillers can help address water and energy consumption from both a building and utility perspective. In an ice-based energy storage system, the only water being used is the water that fills the thermal energy storage tanks. However, this water never leaves the system. The water simply changes between solid and liquid states. This strategy of phase change allows for buildings to shift cooling loads to nighttime hours when energy is more efficiently produced and water consumption is minimized at the power source. The building saves on water expenditures and capitalizes on cleaner off-peak electricity, which helps offset the energy use to make ice.

The energy water nexus doesn’t receive as much attention as it deserves. A water-cooled chiller and the use of water towers is still a common practice. These systems can last between 15 and 25 years11. Designers looking to differentiate their systems and firms as forward-thinking will need to consider less water-intensive  equipment and systems that take advantage of cooler ambient temperatures. Look more holistically at energy and water use at both the site and source.

Ice In The Desert

Henry Johnstone, P.E., is president and director of mechanical engineering for GLHN Architects & Engineers Inc. Contact him at hjohnsto@glhn.com.

More On The Future of BAS Design