The Atlanta facility is the first NFL and MLS stadium to achieve LEED Platinum certification.

Featuring a first-of-its-kind retractable roof, a signature high-definition “halo board” screen that surrounds the playing field, and more than 700 concession and dining areas, Atlanta’s Mercedes-Benz Stadium has taken the concept of the “ultimate fan experience” to new heights.

But the groundbreaking elements that make the new home of the NFL’s Atlanta Falcons and Major League Soccer’s 2018 champion Atlanta United F.C. such a special place were only possible through outside-the-box thinking by a team that worked on those behind-the-scenes features that go unnoticed by fans — at least as long as everything is working properly.

The Falcons and United both recently completed their second seasons in their new home, a 2-million-square-foot stadium in downtown Atlanta that features permanent seating for 66,000 fans as well as retractable seating on the field and concourse 3 levels that will provide an additional 8,000 seats for notable events, such as the Super Bowl. The $1.7 billion venue features 190 suites, 7,600 club seats, 673 concession stands, 24 restaurants, and, for those thirsty patrons, 1,264 beer taps. 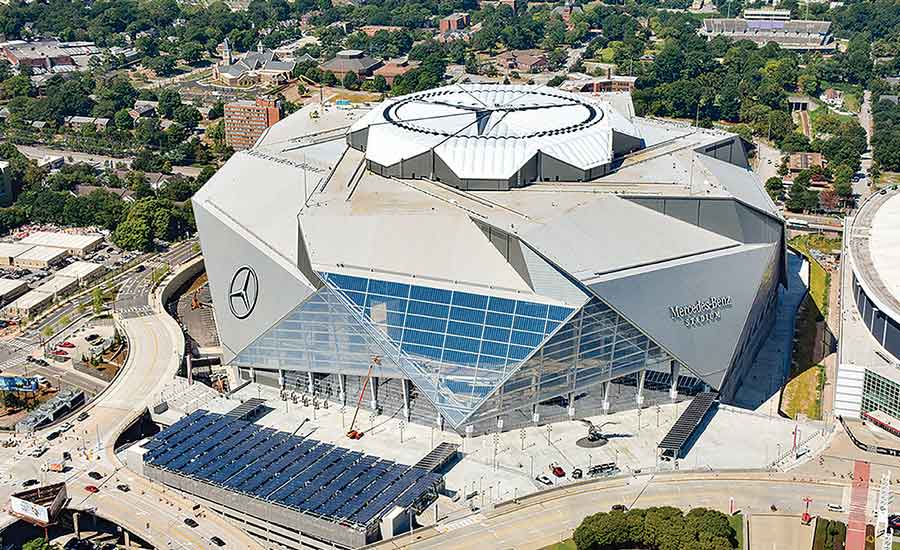 FIGURE 1. The Mercedes-Benz Stadium in Atlanta offers permanent seating for 66,000 fans and features retractable seating for an additional 8,000 individuals.

As the host site for Super Bowl LIII on Feb. 3, the game-changing stadium takes center stage during one of the world’s premiere sporting events, and its capabilities will be under scrutiny.

Technology adds significantly to the fan experience. Wrapping the perimeter of the oval-shaped roof with a 58-foot-tall, 1,075-foot-long video screen gives fans an immersive, theater-in-the-round experience and provides clear views from every seat while preserving the beauty of the roof.

An additional video display — a 100-foot-high mega column — is wrapped with a 3-D video board, and there are 2,000 televisions throughout the venue. More than 4,000 miles of integrated fiber-optic cable supports the technology-driven, interactive game-day experience inside Mercedes-Benz Stadium. 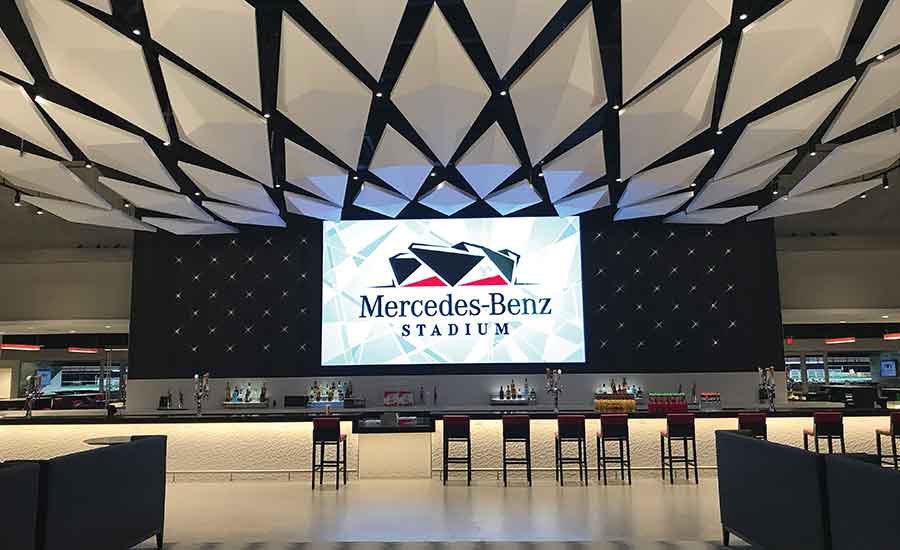 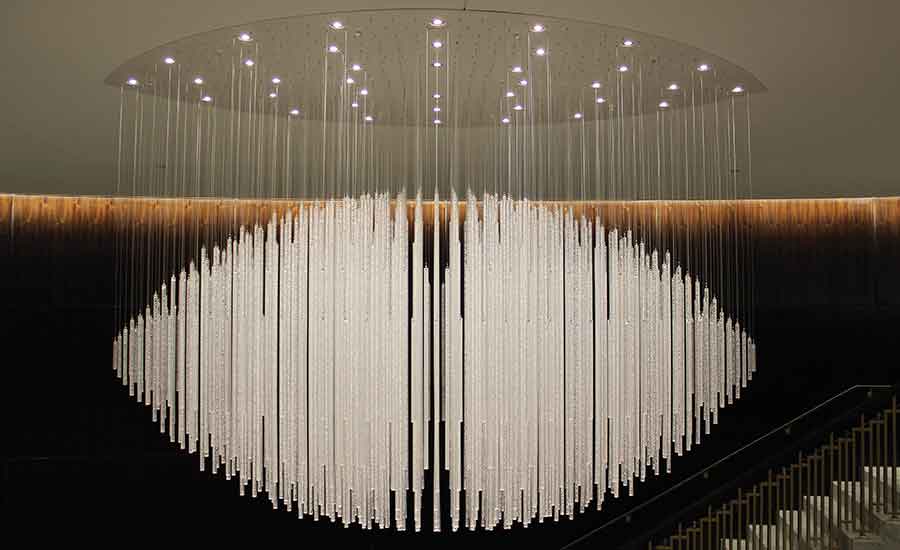 FIGURE 3. A number of last-minute changes required an around-the-clock effort by the mechanical teams to complete the job on time.

“The driving philosophy behind the stadium was the fan experience,” added  my colleague, Lee Roberson, an electrical engineer for WSP from Atlanta. “As someone who grew up in the Atlanta area, it is personally satisfying to see that many of those concessions are operated by local Atlanta restaurants, providing food options that are distinct to our community.”

WSP was responsible for the mechanical-electrical-plumbing (MEP) engineering as well as the lighting design for the stadium. HOK was the architect for the project along with local architects tvsdesign, Goode Van Slyke Architecture, and Stanley Beaman & Sears.

The Atlanta Falcons and Atlanta United are owned by the Arthur M. Blank Group Sports and Entertainment Group, the client for the project.

The operational roof consists of eight triangular ethylene tetrafluoroethylene (ETFE) “petals” that move together along 16 individual tracks, which allows the semi-transparent roof to open and close like the aperture of a camera. The roof posed some unique design challenges for the mechanical systems that WSP was excited to embrace.

It impacted plumbing vent and roof drain systems, electrical and lighting system design, and HVAC exhaust design; all of which had to accommodate the first-of-its-kind motion of the roof petal design. 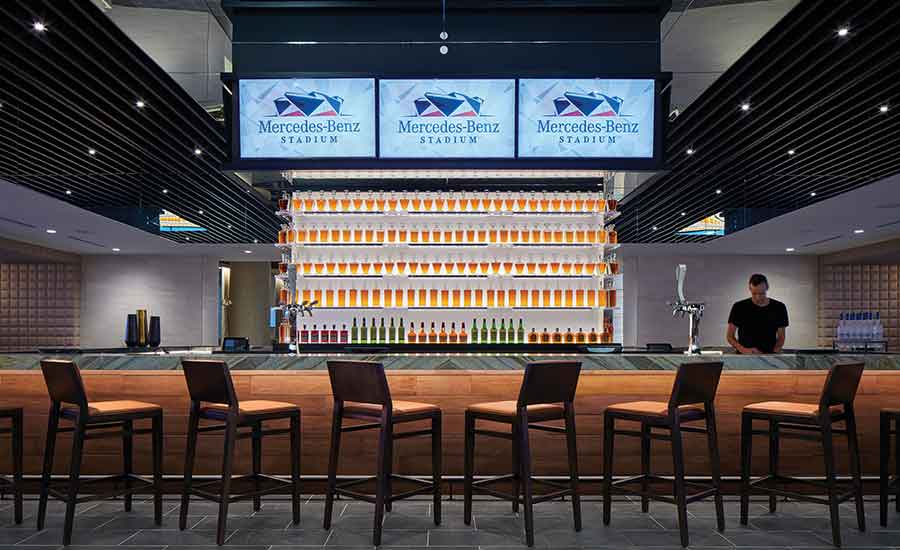 Atlanta’s climate has potential for high heat and humidity in the summer and freezing temperatures in the winter. In the extreme summer and winter seasons the roof is closed, so minimizing the gaps around the operational roof petals needed to be minimized to avoid high infiltration and exfiltration. However, in the spring and fall the roof can be opened to not only enhance the fan experience but to accommodate natural ventilation.

WSP took advantage of the operational roof in its design and developed a matrix that could be used by the automated control system and operations personnel to maximize the benefit.

Another major challenge was accommodating the sequence of construction so that MEP systems could be installed while the building was being enclosed. Since the roof was one of the last elements completed there was minimal work that could be done in the bowl. That presented a time crunch at the end for the MEP contractors.

We had a hard completion date, as a college football game was scheduled and we had to be ready to go to accommodate the game. It took a team effort to make it, and there were a lot of last-minute changes necessitated by some corporate sponsor exhibits that added to the electrical loads. The entire team came together and worked around the clock to get it done on time.

The mechanical systems that were chosen were based on maximizing energy efficiency while providing a robust system that was flexible to accommodate the myriad of the stadium’s uses from large sports events to concerts to smaller events in the club spaces. 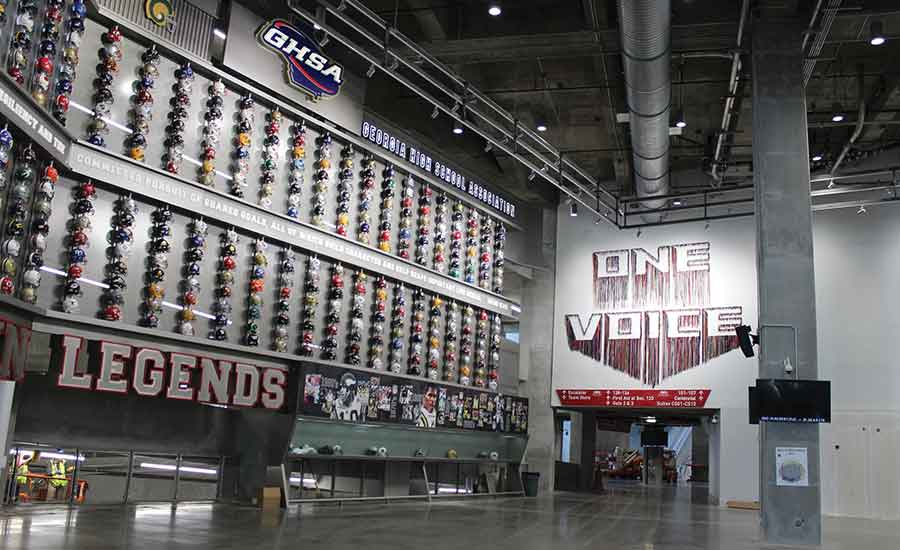 FIGURE 5. The stadium features 82,500 square feet of LED lighting, which will last 10-times longer than standard lights and reduce energy usage by as much as 60 percent.

The HVAC system was designed to provide the desired comfort at both the field level and throughout the stadium to achieve simultaneous player and fan comfort, which carry very different criteria. The design minimizes stratification and drafts by providing multiple AHUs that can be controlled separately as well as ductwork that is localized to serve each AHU zone.

The HVAC control system also has different modes to accommodate the use of the building and factor in the external environment in the most efficient way without sacrificing comfort. Settings include warm-up and cool-down modes; pre-event and post-event; event mode, including condensation mitigation, curtain down, roof open and post-event; and normal occupied and unoccupied mode.

Since the facility is used daily for executive offices and event preparation, the control system must respond to only the areas and zones that are occupied daily.

The new stadium uses light-emitting diode (LED) lights designed by WSP in favor of more traditional but less efficient sources. Mercedes-Benz Stadium features 82,500 square feet of LED lighting, which will last 10 times longer than standard lights and reduce energy usage by as much as 60 percent.

“The use of LED lighting throughout the stadium was a milestone step for a facility of this size,” said Jay Wratten, sports facilities leader for WSP and lead lighting designer on the project. “They give the owner ultimate flexibility while significantly cutting energy and maintenance costs. It takes sports lighting design to a whole different level.”

Design of the stadium’s sports lighting posed a challenge, as the design had to factor in the necessary brightness along with the potential glare due to the proximity of the halo display. 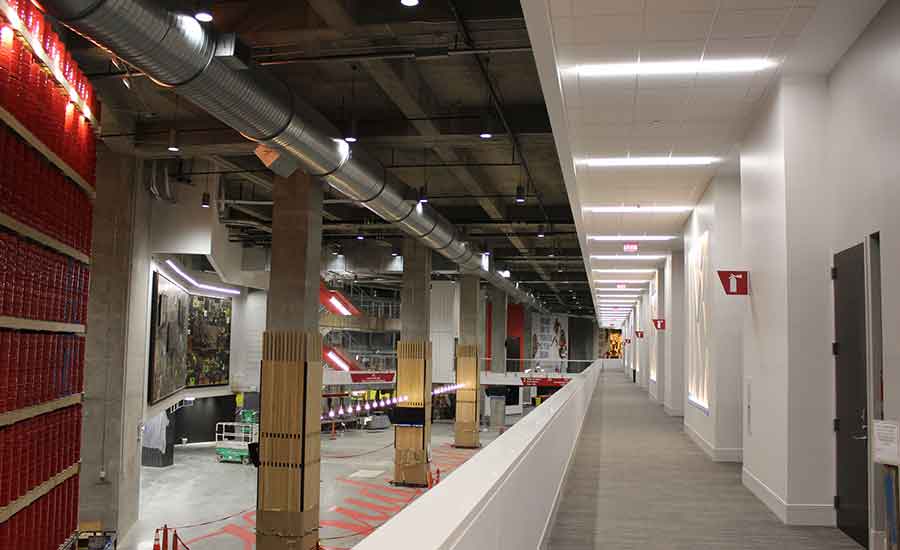 “For player introductions, you can black things out quickly for short periods of time, and it creates better color changing and color rendering,” Wratten said. “It’s rewriting the standards and takes things to a whole different level.”

Other lighting innovations include the use of light fittings as wayfinding devices for fans and color-changing LEDs to illuminate the building’s façade.

Mercedes-Benz Stadium is the first NFL and MLS stadium to achieve Leadership in Energy and Environmental Design (LEED) Platinum certification from the U.S. Green Building Council (USGBC) with 88 points. Factors in this designation included its use of LED lighting and demand control ventilation (DCV), which optimized the ventilation system to achieve LEED credit IEQp1: Minimum Indoor Air Quality Performance.

As a result of WSP’s high-efficiency HVAC design, Mercedes-Benz Stadium saves 29 percent in energy usage compared to a typical stadium. 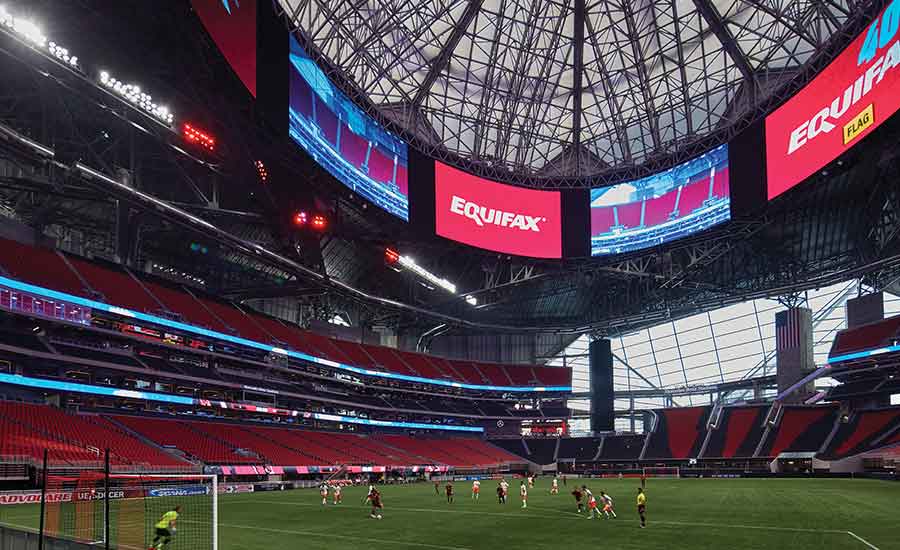 FIGURE 7. In addition to the NFL’s Atlanta Falcons, the facility is the home of Major League Soccer’s 2018 champion Atlanta United F.C.

Also playing a significant role in the stadium’s ability to achieve LEED Platinum is WSP’s design of the plumbing system. Along with using low-flow plumbing fixtures and waterless urinals, Mercedes-Benz Stadium has a 600,000-square-foot cistern serving as a 1.1 million-gallon storm vault of water that can be used for both site irrigation and cooling tower make-up water. The result is a 47 percent decrease in water usage compared to the baseline (EPAct 1992) standard. It is the first sports stadium to receive all water category credits.

The site has more than 4,000 photovoltaic panels capable of generating around 1.6 million kilowatt hours per year of renewable solar energy. This is equivalent to powering nine Atlanta Falcons games or 13 Atlanta United matches annually. 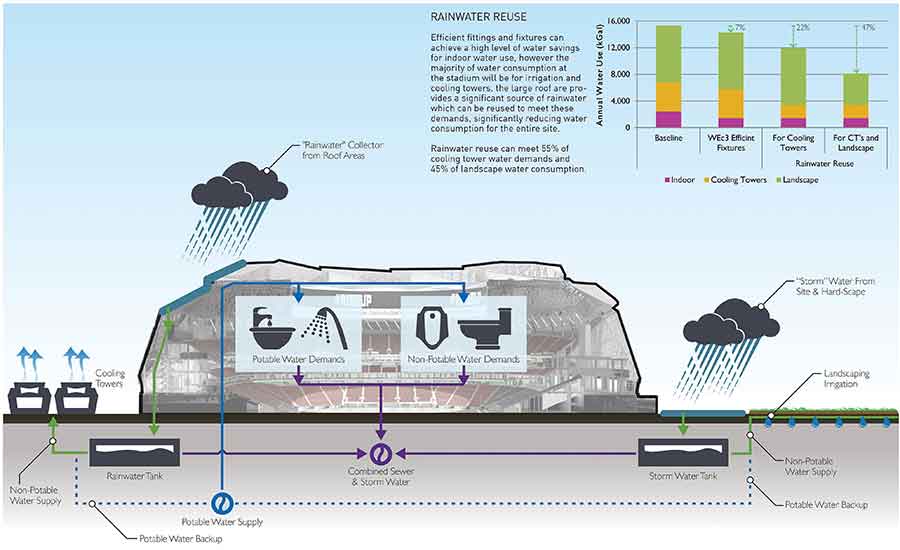 CHART 1. Mercedes-Benz Stadium features a 600,000-square-foot cistern serving as a 1.1 million-gallon storm vault of water that can be used for both site irrigation and cooling tower make-up water.

Mercedes-Benz Stadium also took a green approach to venue parking following the demolition of the adjacent Georgia Dome, the stadium that served as the Falcons home from 1992-2016.

It was converted into a green parking lot called the Home Depot Backyard, and a great deal of the water is going to go to the irrigation of that grass area where the Georgia Dome once stood. The green space accommodates parking, tailgating, and other events.

The stadium’s groundbreaking design has been recognized with several awards, including World Stadium Congress – Stadium of the Year, The Stadium Business Awards – Venue of the Year, and the American Institute of Architects Central States – Large Commercial Category, Merit Award.

For those who were involved with its design and construction, the best reward is the positive feedback from the fans and players who are reveling in an unrivaled event experience.

It was an awesome project and I was honored to have played a part of it. It’s one of my passions to help solve issues that arise in the field during construction, and it was a pleasure to work with so many talented designers and contractors.

John Pulley, project manager, is a Senior Vice President for WSP USA, the U.S. operating company of WSP (www.wsp.com), one of the world’s leading engineering and professional services firms. Based in Kansas City, Pulley has more than 30 years of experience in engineering design, project management, business development, and operations. He is a licensed professional engineer in over 25 states and a LEED-accredited professional.