Deciphering the dramatic changes leading the industry toward the next generation of building control systems.

For many of us involved day to day with the design, installation, and operation of BAS, it often seems like there has been little in terms of new products and innovation. But, if we step back and look at it from a broader perspective, there are actually a series of dramatic changes underway that are leading us to the next generation of building control systems. This next generation has the potential for improved control and efficiency and also to serve as a data source to enable improved decisions on facility operation and optimization. This evolution will ideally provide for systems that are more effective while being more secure and can help alleviate many of the potential cybersecurity risks that may exist in today’s installations.

For many years, the “typical” architecture for most BAS installations has had PC workstations, servers, and a few building level controllers that were installed on an Internet Protocol (IP) network. The rest of the controllers were then connected to a dedicated field bus, such as BACnet MSTP or LonTalk FTT-10.

A few years ago, vendors started offering the option to connect more powerful controllers, such as those used to control air handlers and chiller plants, with an option to connect on an IP or field bus. This resulted in systems that had much faster performance and were more “IT friendly.” See Figure 1. 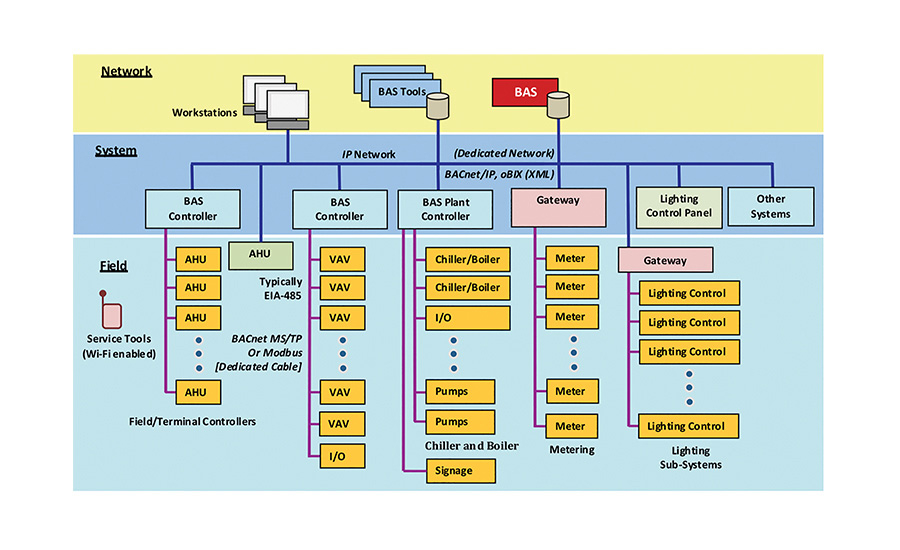 Vendors are now tackling the challenge of moving smaller, less expensive terminal unit controllers onto the IP network, allowing for installations that are all network connected. There have been several challenges to this latest transition. First, the cost to make a device IP-capable used to be very high. Today, that is no longer the case as the cost of processing and communications has dropped, largely driven by the development of mass-market Internet of Things (IOT) products.

Second, the cost to connect controllers to an IP network is too expensive compared to the cost of a conventional field bus. The reason for this is that most networks utilize architecture where all network devices are connected by homerun wiring to a dedicated network switch port. Locating network switches out in the space can reduce the cost of this homerun wiring, but it is still a complicated and expensive solution as compared to the low cost of daisy chain field bus architectures. Vendors have found several clever solutions to provide IP-connected controllers at a cost that is competitive with field bus. See Figure 2 for an example of an integrated architecture. These include: 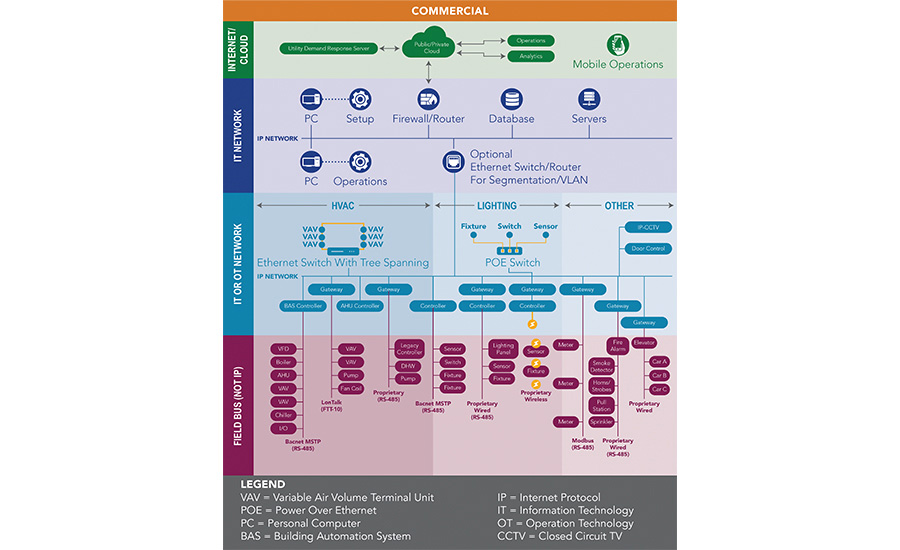 See Figure 3 for an example of an STP architecture. While this approach is not fail proof, it should provide better reliability than MSTP at a competitive cost. Designers should also note that there are limitations on both the number of controllers that can be daisy chained and the maximum length of the cables. 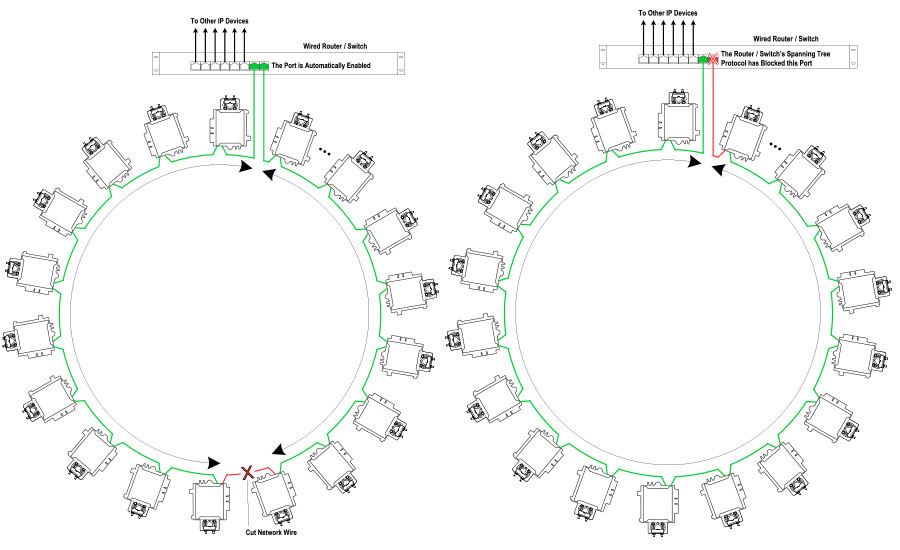 As control systems become more network-enabled, they’re also at a heightened risk and become targets for cyberattacks. Attackers  could attempt to use a building control system as an entry point into other systems or to override functionality either for malicious control or for ransom. Fortunately, so far, there have been few successful attacks on building control systems. This is an area of risk, and as we move to more connected systems, the risk becomes even greater.

There are several options that control system designers and integrators need to be using to mitigate these risks.  Many of these are documented in the “best practices” that most BAS vendors provide. This includes commonsense approaches, such as the use of a dedicated operational technolgy. (OT) network, using the network to protect communications (called a VLAN), and changing default passwords.

The longer term solution involves the use of encrypted communications for control systems, and there is work underway in ASHRAE to develop a new option for BACnet that features secure communications. The proposed approach will provide a method to encrypt and secure BACnet communications with the use of the same technology that is already in place for tasks such as online banking. This approach should also simplify the challenge of getting approval to place BACnet devices onto enterprise networks, since their communication will be similar to other network connected devices. The ASHRAE BACnet  committee has developed a draft document that was put out for public review earlier this year. Secure communications is expected to become part of BACnet soon. Several vendors have indicated that they intend to support this new option for their BACnet products shortly after it is approved. Adding secure communications to an existing system will require, at minimum, a software update and additional configuration, but for older systems, it may also require hardware updates as well.

When we only had a few devices in a building connected to a network, there was little reason to focus on the network design. It was adequate to specify a basic Ethernet switch or to state that the network ports would be provided by the owner’s IT group. The movement toward systems that are all IP, and be cybersecure, requires special attention to how the network is designed starting with a decision if it should be a standalone (often called an air-gapped network) OT network, converged on an enterprise network, or hybrid with a firewall between the OT and IT networks. If the design is primarily on the owner’s IT network, then the control system designer will need to coordinate closely with the network designer and/or the owner’s IT group. If it is a standalone OT or hybrid system, then it will require a detailed design including selection of switches, cabling methodology, and configuration details. Many vendors and integrators are working on enhancing their skills in networking, but this transition does have some technical challenges that need to be addressed.

Commercial building control systems are often designed and deployed to operate in a manner that is less than optimal in terms of efficiency. There are many efforts underway to help designers, contractors, and owners achieve improved system performance. Here is a summary of these efforts:

The initial library for this project will be supporting the sequences from ASHRAE Guideline 36 and will be able to be extended to cover other standard and custom sequences. Other projects such as adaptive control for building energy efficiency are focused on the use of artificial intelligence and machine learning to automatically determine the optimal operating parameters for a control system as well as improved methods for fault detection and diagnostics.

There are several efforts underway to help develop solutions for semantic tagging. This includes the work done through Project Haystack. ASHRAE is now working on developing a standard for semantic tagging that will be coordinated with several industry efforts and will also connect in with BACnet. Systems that are designed with semantic tags are easier to configure and program and can readily provide information to other necessary building services making the BAS more valuable over time.

The changes that are occurring with commercial building control systems, in many ways, seem like they are incremental and not revolutionary. But, taken together, they are  enabling a dramatic  transition of BAS from being just a control system to being a system that both provides controls and also serves up data that can be used for other critical  functions. This will help building owners accomplish improved efficiency, comfort, and reliability as well as a reduced overall cost of ownership.

Paul Ehrlich is the founder and president of Building Intelligence Group LLC, a consulting firm focused on the delivery of energy efficient commercial buildings with a  focus on controls, systems integration, and building to grid integration. For more information, see www.buildingintelligencegroup.com.