Have You Vaccinated Your Building?

The dreaded flu is upon us! When cold and dry weather arrives in North America, this nasty viral respiratory disease makes many people miserable with headaches, fever, cough, muscle pains, and runny noses. So far this season, over 80% of reported illnesses have involved the virulent H3N2 strain of influenza A. This viral strain is the most serious because it is difficult to prevent and can cause deadly health complications among vulnerable groups like the elderly and children.

The severity of the yearly flu season in southern hemisphere countries, where winter precedes ours by several months, gives North America a preview of what to expect. This year the U.S. was bracing for a difficult winter after witnessing Australians suffer over twice the number of cases of H3N2 flu in 2017 compared to 2016. In addition, they had 745 deaths compared to their average of 176 deaths. For comparison, a mild flu season in the U.S. historically kills about 12,000 Americans, while a severe season kills about 56,000.

The U.S. Center for Disease Control informed the public that the H3N2 virus is especially difficult to combat with a vaccination because the virus mutates quickly, thereby evading immune memory protection conferred by the flu shot. Generally, the flu vaccine for H3N2 only reduces a person’s risk of serious illness by about one-third, compared to approximately 70% effectiveness when the dominant viral strains are the milder influenza type B or H1N1.

There are other effective preventive measures that we can take in addition to vaccinations, but interestingly, these receive comparatively little publicity.

Research has shown that another simple way to reduce the risk for influenza infection is to increase indoor humidity levels. 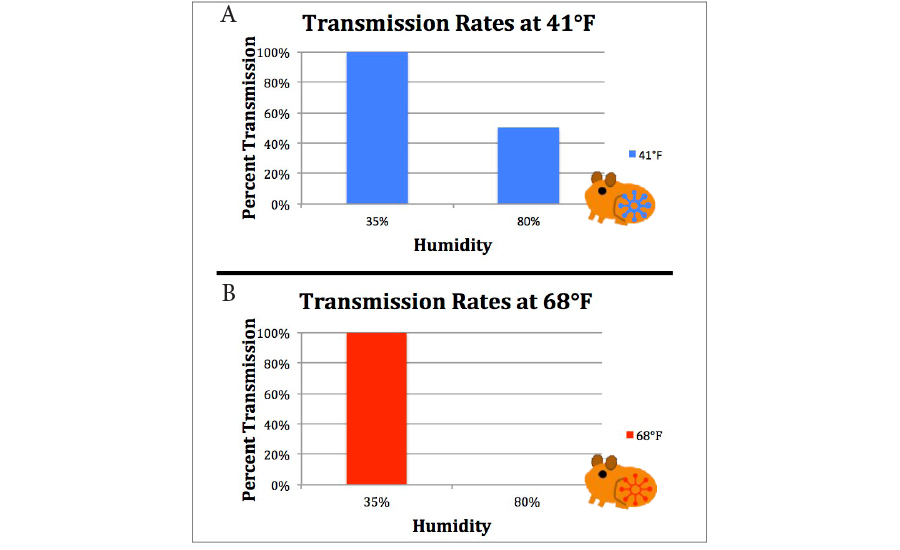 One excellent study used guinea pigs to show that when relative humidity (rh) was maintained above 40%, only a fraction of airborne influenza virus particles caused illness, compared with a transmission rate of 70% percent when the rh was around 20%.

What’s more, the protective impact of higher humidity levels appeared to be rapid, with the majority of viral inactivation taking place within 15 minutes of when viral particles were first released into the humidified environment.

The cellular mechanisms underlying the relationship between viral infectivity and ambient rh are still being studied, and we have much to learn about the interactions between the virus, solutes, and water molecules in an airborne droplet.

Regardless of exactly how this works, with an aggressive flu virus moving through the air, maintaining indoor rh levels between 40% and 60% to protect our health will benefit all building occupants — including family members in homes, workers in office buildings, students in schools, and patients in hospitals.

The environmental contributors to disease, such as dry indoor air (which can be modified for better health), are currently blind spots in the conventional medical approach. As engineers, building managers, and clinicians become more aware of the connection between dry indoor air and disease, the enormous potential of balanced indoor air hydration to maintain health will be recognized as cutting-edge medical science.