In the first of a pair of articles on motor fundamentals for HVACR, the author gets into everything from industry standards and service conditions to changing speeds, enclosures, and the often misunderstood service factor. You’ll want to save this one for your team’s reference library.

Our objective in specifying motors for HVACR equipment is to start and run the driven equipment under all operating conditions reliably and with reasonable life expectancy. The manufacturer of the equipment and motor supplier have primary responsibility for this, but we should understand motor ratings, design features, and application conditions well enough to identify project-specific conditions that affect motor selection and include them in the equipment schedule or motor specification. This article is the first of two on the subject that aim to take you beyond the basics of voltage, speed, and horsepower and help you address other important considerations in your specification.

The ‘Workhorse of Industry’

Our initial discussion is limited to the AC induction motor — the simple and durable electric motor that drives the majority of fans, pumps, and compressors in HVACR applications. An induction motor consists of coils of wire wound in a steel core around the periphery of the enclosure, referred to as the stator, and a rotor consisting of a “squirrel cage” of conductive bars in a steel core. Voltage applied to the stator windings produces a rotating magnetic field and induces current to flow in the rotor, producing a magnetic field there. Interaction between the stator and rotor fields develops torque, causing the rotor to turn in the same direction as the stator field.

The nominal speed of a motor in RPM is the “synchronous speed” of the rotating field determined by the number of magnetic poles designed into the stator; for a 60 Hz motor, possible synchronous speeds are 7,200/N, where N is the number of poles and must be an even number. Relative rotation between the stator field and rotor is required to induce rotor current and produce torque, so speed under load is always slightly lower than synchronous speed, such as 3,560 RPM or 1,780 RPM. As nominal speed is reduced, the size and cost of the motor increases. The most economical speeds for most applications are 3,600 or 1,800 RPM with 1,800 RPM preferred for bearing life.

The primary American standard for motors is the National Electric Manufacturer’s Association (NEMA) MG1 – Motors and Generators. It covers motors from fractional to 50,000 hp and is divided into requirements for small and medium machines, which apply up to 500 hp in 1,800 RPM and 3,600 RPM motors, and requirements for large machines over 500 hp in those same RPM ratings. MG1 includes standard frame sizes and dimensions for small and medium machines. For standard applications, small and medium motors of the same frame, hp, speed, and voltage are typically physically interchangeable. It does not establish frame sizes or dimensions for large motors. For this reason, large machines are often referred to as “above NEMA,” which can be misleading as they should still comply with MG1 performance requirements.

Other standards include American Petroleum Institute (API) Standard 541 and Institute of Electrical and Electronics Engineers (IEEE) Standards 841 and C50.41. These apply to severe environments and demanding applications such as petrochemical and central station power plants. They represent overkill for most commercial HVACR applications, but are a good resource when designing industrial or utility projects.

Permissible starting frequency, load inertia, and over-speed capability vary with the hp and speed of the motor.

Unusual service conditions which require special design or selection of the motor include:

Some of these are addressed by the equipment manufacturer without designer involvement, but site- or application-specific conditions should be included in your specification.

Voltage is the Key to Torque

Producing torque to start, accelerate, and run the load requires adequate voltage at the motor. Torque is proportional to the square of voltage, so a small change in voltage can have a significant impact on the developed torque. Motor voltage ratings differ from electrical system voltages by approximately 5% to allow for voltage drop in the circuit conductors (the electrical equivalent of friction loss in piping) without reducing motor voltage below the rated value. A motor for use on a 480V system will have a nameplate rating of 460V, for a 240V system a nameplate rating of 230V, and so on.

A motor may have a dual rating for use with more than one system voltage. 230/460V three-phase motors have two sets of windings for each phase with separate leads brought out to the terminal box. The individual sets of phase windings are connected in parallel for a 240V system and in series for a 480V system. A similar configuration is available in single-phase motors rated 115/230V.

Can a 230V motor be safely run on a 208V system? 208V is 9.5% below the 230V rating, so even if you maintain nominal system voltage all the way to the motor, you are at the bottom of the range for producing rated torque. If the motor is lightly loaded, you may get lucky but should specify a 200V motor for this application.

Getting Up to Speed

Current at 0 RPM is referred to as “locked rotor current” and has implications for both the motor and the electrical system. Locked rotor current heats the motor at a higher rate than running current and produces magnetic forces on the windings. This is the reason that standards and manufacturers limit starting frequency and require a minimum time between successive hot starts.

Figure 2 shows motor current versus speed. A typical motor draws six to seven times rated current from rest until it reaches 85% to 90% of rated speed, where the current drops off steeply to a steady state value corresponding to the steady state speed. Current at 0 RPM is referred to as “locked rotor current” and has implications for both the motor and the electrical system. Locked rotor current heats the motor at a higher rate than running current and produces magnetic forces on the windings. This is the reason that standards and manufacturers limit starting frequency and require a minimum time between successive hot starts.

Starting large motors may cause unacceptable voltage dip on the electrical system. If voltage supplied to other loads drops below rated it can adversely affect their operation. Voltage dip at the starting motor reduces starting torque, extends acceleration time and heating, and may lead to insulation deterioration and shortened life. To mitigate this, large motors may be started with methods that reduce locked rotor current, such as “soft starters.” However, most methods reduce current by reducing voltage applied to the motor, and the resulting loss of starting torque must be considered. We’ll discuss different methods of starting large motors in August, but for now know that if you intend to utilize a reduced-voltage starting method, you need to communicate that to the manufacturer.

MG1 defines the key points on the speed-torque characteristic by a Design Letter which appears on the nameplate (Figure 3). As you can see, the typical curve discussed earlier is Design B. Design C has a similar characteristic to Design B but provides higher torque during acceleration that makes it suited for equipment such as conveyors that start under load. Design D has very high starting and breakdown torque suitable for driving loads that experience momentary extreme overloads without stalling out. This comes with some trade-offs: poorer speed regulation under load due to the shallower slope of the curve at high speed, and lower efficiency.

If an application requires a characteristic other than Design B, it should be determined by the equipment manufacturer, but it is common to specify that motors be Design B unless otherwise required to allow replacement with a readily available motor in the future.

Figure 1 also explains what happens as load on a running motor changes. Under light load, such as a centrifugal pump started against a closed discharge valve or an empty conveyor, speed is close to synchronous speed and current is low. As the valve opens or material is placed on the conveyor, load torque increases and the motor “backs up” the speed-torque curve and slows down. At the same time, lower speed causes current to increase toward rated. If load torque exceeds the rating of the motor, current increases above rated, causing excess heating and shortening the life of the winding insulation. An increase in load torque above the motor breakdown torque results in stalling the motor, current increasing to the locked rotor level, and a certain trip.

Motor enclosure specification should be based on the operating environment. Table 1 lists common low-voltage motor enclosure types and acronyms used to specify them. For most indoor applications an ODP enclosure, which protects against accidental contact and dripping liquids, is adequate. In outdoor locations and wet or dirty indoor locations, a totally-enclosed motor is usually specified. Since no enclosure can seal perfectly, temperature changes result in introduction of ambient air into the enclosure over time. Totally enclosed motors in outdoor or unheated indoor locations that do not run continuously should be provided with a drain/breather and a winding heater to prevent internal condensation.

ODP motors are cooled by an internal shaft-mounted fan, drawing air through one end of the enclosure, passing it over the windings and rotor, and discharging at the other end. The most common totally-enclosed construction, TEFC, has an external shaft-mounted fan under a protective cowling that blows air across the enclosure, which usually has raised surfaces to improve heat transfer. TEAO motors are intended to be mounted in the airstream of a fan driven by the motor and therefore do not have a fan. TENV motors also have no fan and are limited to small sizes in which the motor can be adequately cooled by convection alone.

The service factor (SF) is one of the least understood ratings of an AC motor, with many thinking it is a multiplier of the hp rating at which the motor can be operated continuously with no loss of performance or life expectancy, i.e. that a service factor of 1.15 makes a 10 hp motor effectively an 11.5 hp motor. However, MG1 states that when the voltage and frequency are maintained at the nameplate value, a motor may be loaded up to the hp obtained by multiplying the rated hp by the service factor, but it may have efficiency, power factor, and speed different from that at rated load and will have reduced life expectancy.

If voltage drops below rated when operating within the service factor, current may increase, leading to excess heating and/or tripping on overload. A design should not count on use of service factor to meet the normal hp requirement of the load. Specifying SF higher than 1.0 should be considered a means of providing margin for temporary overloads or temporary under-voltage conditions when operating within rated hp.

Note that this temperature margin applies only to the winding insulation. If extended or frequent operation at higher than standard temperatures is anticipated, the ability of the bearings and their lubrication system to operate satisfactorily must also be addressed.

I hope this has provided some useful insight into motor operation and ratings. In the August issue, we will continue the discussion with starting methods, efficiency, European standards, and variable speed operation. 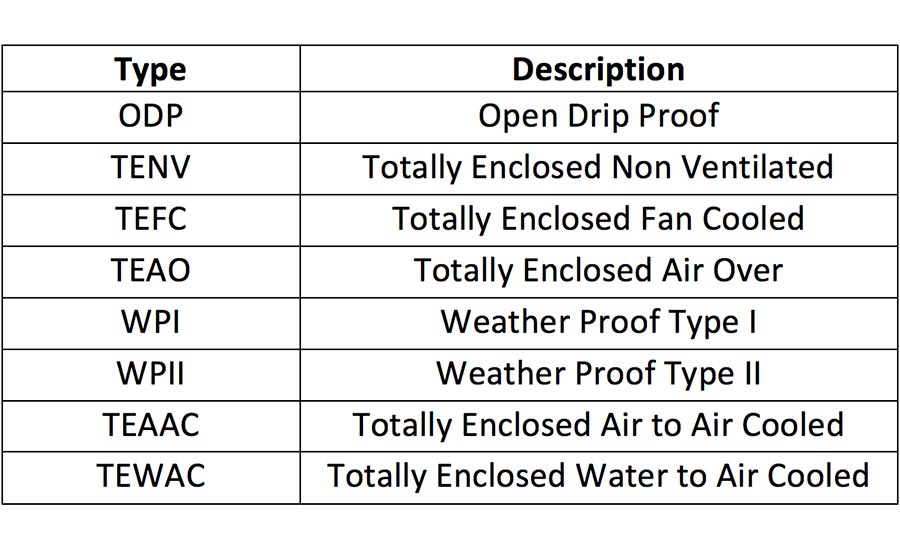 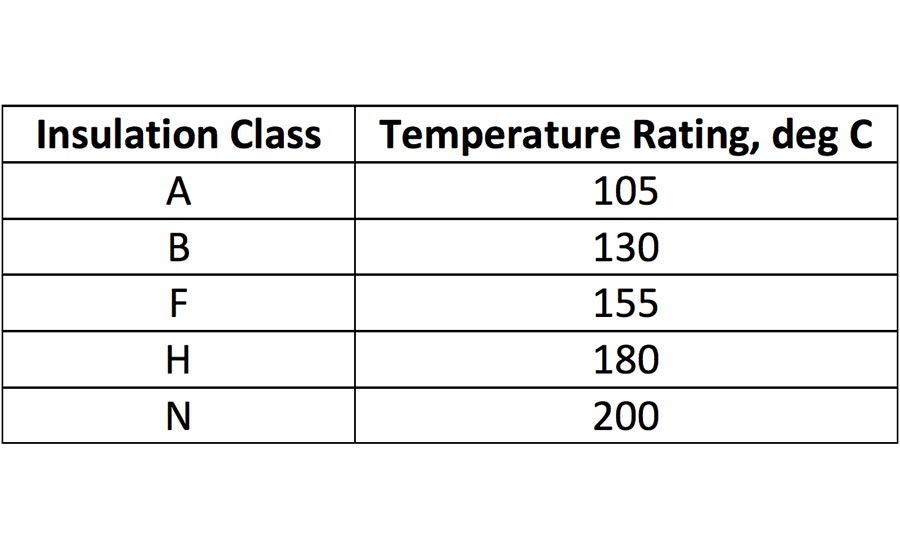