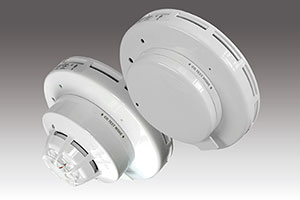 Its prime use is for facilities such as hotels, dormitories, apartment buildings, hospitals, and nursing homes as per NFPA 720, but is suited to many commercial installations as CO detection for life safety grows.
The Axis CO detector is an electrochemical sensor capable of detecting three levels of carbon monoxide (70,150, 400 ppm), with superior rejection of transient signals, according to the company. The built-in sounder can provide either a temporal 4 (CO event) or temporal 3 (fire alarm event) signal, with the fire alarm event having the highest priority. The Axis AX fire panel can activate multiple CO sounder bases in a facility when CO is detected, providing the appropriate synchronized evacuation tones throughout an area or the entire facility.

To add intelligent fire detection to the device, standard Axis AX photo, ion, heat, and multi sensors can be locked in. The Axis CO detector/sounder base features an automatic daily test with manual test option available, and has a life of approximately six years. The CO detector provides a signal when its cell needs replacement, which can be done without removing the device from the wall or ceiling. The new CO detector and sounder base is UL approved.