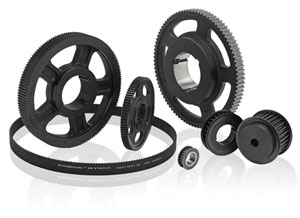 A full line of stock, compact, power-dense TAPER-LOCK® sprockets, fin fan QD sprockets, and Minimum Plain Bore (MPB) sprockets will also be available from stock. Baldor’s sprockets are made with the modified curvilinear tooth profile for 8mm and 14mm pitches.