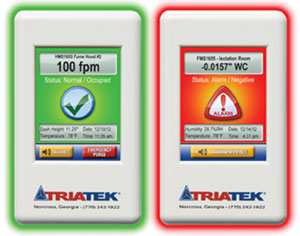 Triatek has released a new line of controllers – the 1655 series. Similar in capabilities to the already well accepted 1650 line, the 1655 marks a significant leap forward for critical environment control in large part due to a new, patent pending technology Triatek has named SAFETY HALOTM”.

Because of Triatek’s new Safety Halo technology, employees are no longer required to stand directly in front of the controller in order to see the status of a fume hood or room.  In other words, Triatek has managed to increase the status notification viewing angle to 180 degrees for its new line of controllers using proprietary edge lighting.  This unique feature allows staff to check status both “at a glance” and “down the hall” and is fully programmable.  Intensity can be set based on lighting conditions and the Safety Halo itself can be programmed to only be active during certain hours of the day.

The 1655 Series also benefits from an updated GUI.  New “action icons” now clearly indicate the status of a fume hood or room and displays if corrective action is required.  Employees will no longer need to rely just on color codes as a safety indicator or try to decipher the numbers shown on the display.  The use of new universal “action” warning icons have simplified display interpretation greatly for staff even though the 1655 still uses background colors and actual measurements, similar to the 1,650 displays, to help communicate status.  However, Triatek recognizes that some customers may prefer the older GUI interface and will continue to manufacture and sell the current line of 1650 controllers.