Smoke clears over a popular NYC restaurant and its neighbors 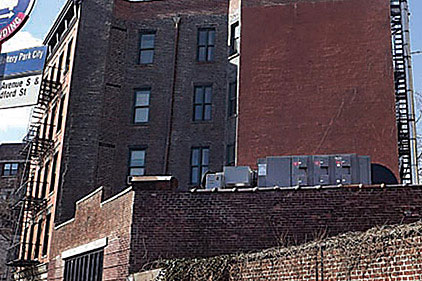 In October 2011, Mas (la grillade) opened in New York City with the goal of elevating hardwood grilling to a culinary art using fire and smoke. Located in Lower Manhattan’s Greenwich Village, “the grill” aimed to build upon the success of its sister restaurant and predecessor, Mas (farmhouse), and rely exclusively on hardwoods as its primary cooking fuel. While the new restaurant quickly distinguished itself as one of New York City’s top new restaurants, its immediate neighbors were left dealing with the culinary by-product of solid fuel cooking: wood smoke. Frustrated neighbors had become so distraught from the smoke and grease emissions that they even threatened legal action to shut down the restaurant if the situation was not remedied. The restaurant owner was in dire need of an effective solution before his neighbors’ goodwill ran out.

The foundation of Mas (la grillade)’s culinary vision is to smoke, char, steam, and grill sustainably raised and organic foods over four wood-burning grills. Residential structures 10 stories (and larger) surround Mas (la grillade) on three sides. As the restaurant churned out wood-fired fare — essentially the equivalent of burning four fireplaces year-round — smoke from the kitchen inevitably wafted into the windows of its high-rise neighbors. Smoke and grease from the grill were also affecting the working conditions of the kitchen staff and employees, and occasionally drifted into the dining area.

The wood smoke used to enhance the flavor of the food comes from oak, cherry, and apple trees and is some of the densest and hardest to eliminate. The restaurant owner brought in a water bath mechanism from Italy to try to contain the smoke, but this method proved unsuccessful. After only two months of opening to great success, both the restaurant’s owner and its neighbors were growing desperate for a comprehensive smoke removal method.

Mas (la grillade) tapped the clean air expertise of United Air Specialists, Inc. (UAS) to evaluate the emissions and then design a system to prevent the offending smoke, grease, and odor from spreading into the neighborhood and the restaurant. UAS’ team of engineering experts proposed a rooftop installation of its Smog-Hog® PSG. Due to the pressing nature of the situation, the restaurant owner needed the installation to take place as soon as possible and requested it be installed quickly to minimize restaurant downtime.

In February 2012, the installation experts planned and coordinated each component of the Smog-Hog PSG system, preparing the necessary plumbing and electrical requirements in advance of the installation date. Delivery of the system was expedited, and when it arrived at Mas (la grillade), the rooftop installation was completed in less than one day and was operational for dinner service. The Smog-Hog’s electrostatic precipitation technology (ESP) captures smoke, grease, and other contaminants in its aluminum collection cell, releasing only clean air into the environment. With a daily in-place cleaning option programmed to remove soot and grease from the collection cells, the Smog-Hog PSG ensures consistent, high-efficiency operation while delivering virtually worry-free results for the restaurant owner.

The immediate result was the removal of smoke emissions and odor from the cooking operation and the release of treated exhaust air into the surrounding Greenwich Village neighborhood. Needless to say, the neighbors and restaurant owner were both very pleased with the return of clean air. All complaints and threats of shutting down Mas (la grillade) ceased. Finally, the restaurant became a safer and more pleasant place to work, since the proper exhaust volume is now being pulled from the kitchen hoods, improving the environment for employees and patrons.

The Smog-Hog PSG installation is fully compliant with New York City’s air quality standards — as inspected and approved by the Department of Environmental Protection (DEP). The Smog-Hog equipment is also approved by the city’s Materials Equipment and Acceptance (MEA) Agency and certified by the NYC Bureau of Electrical Control. In addition, UAS worked closely with the Fire Department of New York in 2011 to achieve the FDNY Certificate of Approval for the Smog-Hog PSG, making it a preferred choice for restaurants throughout New York City.