The company’s high-temperature fans are designed for packaged boiler systems. 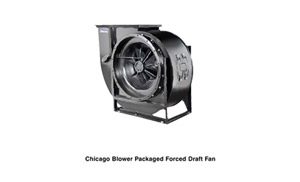 Chicago Blower is equipping their wind-box mounted and stand-alone Packaged Forced Draft (PFD) fans with a new wheel construction capable of handling elevated temperatures to 200°F or more depending on the motor’s capability.

The compact design of the standard direct connected arrangement four fans can be used in the system rather than the more expensive arrangement eight fans that have a larger foot-print and require shafts, bearings, and couplings.

Chicago’s versatile PFD fans with high-efficiency airfoil wheels are pre-engineered for numerous motor frame sizes. This allows for faster turn-around and at lower cost than custom fans. Three wheel diameters capable of various widths are available for each of the nine sizes to ensure maximum efficiencies for most every operating point within its performance range.

For system design versatility, any one of seven standard discharge positions can be specified. Many options are available to suit the application, including the inlet volume control and access door shown in the photo. A mixing box with an FGR connection and fresh air damper are also available. In addition to packaged systems, many OEM customers are supplied with PFD components, such as wheels, cones and housings, to build into their system. Details on the PFD fan series are on Chicago Blower’s web site or from representatives located throughout North America.