An engineer friend of mine recently sent me an email asking if I knew of anybody that could help him with a small commercial project in the American desert southwest, an area noted for plentiful sunlight and temperature extremes. The project would include an all-electric HVAC system. The owner wished to power the facility 100% with photovoltaic (PV) solar panels, and it would not be connected to an electric power grid, since the site was somewhat remote. The owner was not certain if a generator would also be required and was hoping to minimize or eliminate its need. The owner was passionate about renewable energy to reduce the carbon footprint in keeping with good environmental design.

My engineer friend must have been a good fisherman, because I took the bait. I told him I would assist with some basics, but I wasn’t interested in doing the actual design work. So, I decided to provide him with some theories about solar systems to ensure the owner and architect-engineer team would have some common understanding of the situation. It was painfully obvious the owner had unrealistic expectations. Hopefully, this article will provide a similar understanding for those contemplating a PV system for their commercial facility.

To convey this, I provided an illustrative example of a fictitious owner of a commercial facility that, like the current client, wishes to have the facility provided with 100% annual solar contribution. The fictitious owner has decided to incrementally install the solar PV system to ensure it isn’t too large while using a rented generator to provide any intermediate power while the solar system is increasing in size. This approach also suits the fictitious owner’s budget. Thus, the owner hopes to creep up to the optimal system size with real-time data for the next few years and then eliminate the generator. This also helps one visualize what is happening for the purposes of this article.

The design team for the fictitious owner has decided upon PV panels that feed a battery system via a charge controller that, in turn, feeds the building electrical system with an inverter to convert DC to AC power. The batteries will be charged by the PV panels during the daytime, and the batteries will power the facility at night or when the sun isn’t shining. This is commonly called diurnal storage, since the storage period is for a day or so. There is no electrical grid at the site.

Wikipedia defines a diurnal cycle as any pattern that recurs every 24 hours as a result of one full rotation of the planet earth around its axis.

Let’s call the fictitious owner Samantha. Samantha decides to go slow at first, since her budget has focused upon providing an efficient building envelope and HVAC system. She decides to install 100 square feet of panel and the corresponding batteries after the building has been in use for one year. Samantha notes the generator’s annual fuel bill decreased by 10% after the solar system was installed.

Samantha decides to install another 100 square feet of panels the next year for a total of 200 square feet, and she notes the annual fuel bill is reduced by 20% of the original fuel bill. At this rate, she has concluded she will only need 1,000 square feet of PV panels to achieve her goal of 100% solar for her building using a linear analysis. 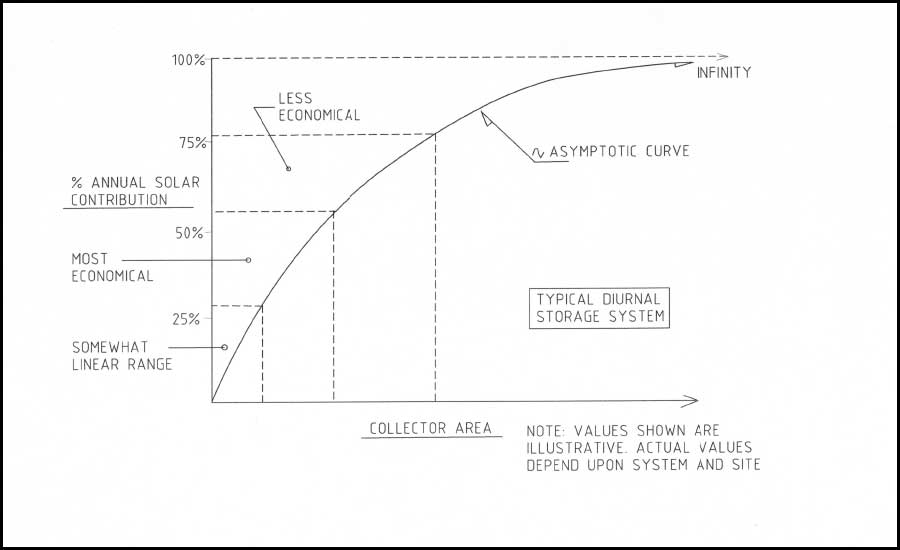 Samantha is now encouraged and decides to take a bigger leap. She installs an additional 200 square feet of panels and batteries to match, bringing her facility up to 400 square feet of panels. Samantha notes that her generator’s annual fuel bill reduced by 35% instead of the anticipated 40%. She is a bit disappointed, but figures there were probably some weather-related reasons for the shortfall.

Business has been good, so she decides to increase her solar system with another 200 square feet of panels and batteries, bringing the total of collectors up to 600 square feet. At the end of the year, Samantha discovers the generator annual fuel bill reduced by 48% instead of the anticipated 60%. She calls the contractor for an inspection of the solar system to determine the problem, and the contractor provides a thorough inspection of the panels, batteries, and electronics. The lead technician tells Samantha he can find nothing wrong with the system. At this point, Samantha is concerned about her plan to fully power her facility with solar energy. She is perplexed and decides to do some investigation on her own. She checks on her solar system during a fairly mild day and discovers the system is carrying the building load just fine, but the charge controller is backing off since the batteries are fully charged by 1 p.m. The rest of the day, the charge controller is not allowing the panels to deliver their full amperage. Of course, there was the occasional storm with heavy clouds for multiple days that shut down the PV system requiring the generator to run during the year. Then, there was the three-week period that the inverter failed, and she had to wait for a replacement.

The linear performance of the solar system that Samantha initially realized was obviously not continuing, and she now faced a rather grim decision about what to do next. The 48% savings on the generator fuel bill helped, but she was hoping for more savings, and she was further interested in minimizing the generator’s emissions. She decides to install another 200 square feet of panels and corresponding batteries, which brings her solar field size up to 800 square feet. At the end of the year, the reduction of the annual fuel bill increased to 58%.

As she added more solar capability, Samantha discovered there were many days when the weather was mild. The solar system easily handled the load, and the panel output was reduced by the charge controller. Cloudy periods and occasional maintenance outages didn’t help either. The increased solar capacity was useful only on the more demanding weather days when the HVAC system needed the extra capacity. Those days were becoming less frequent as the solar system size increased, and she realized she was chasing diminishing returns. See Figure 1 to get a graphical representation of what happens with diurnal storage systems.

Solar energy systems need diurnal storage to continue to carry the load when the sun isn’t shining, such as during the night or cloudy weather. It also appears that diurnal storage systems have a major shortcoming in that they do not optimize the PV system output since mild days require the system output to be throttled as one tries to increase the PV system size. Increasing the battery storage capacity may help incrementally, but the cost soon becomes prohibitive. A more robust storage system would seem to be in order, but on-site storage seemingly isn’t feasible from a cost perspective.

The U.S. Army Corps of Engineers Construction Engineering Research Laboratory (USA-CERL), as it was known decades ago, produced “Solar Energy Systems” TM 5-804-2 circa 1988. This document noted the asymptotic-like nature of the annual solar contribution percentage vs. the collector area using diurnal storage. This document works equally well for PV systems due to their similarity to solar thermal systems, as both use sunlight as their energy source.

Seasonal storage provides the advantages of diurnal storage without its drawbacks from a solar harvesting perspective. A common and well-understood technique is a grid-tied PV system that utilizes net metering. With this scenario, excess power produced by the PV system during mild weather is allowed to flow into the grid via the backward running electric meter where it is consumed by other users. During extreme weather events, the facility may then draw power from the grid in excess of what the solar system can provide for that day. The grid thus acts like a massive battery with seasonal storage capability without its initial cost. This ideal situation may not exist with all electric utilities, and one is advised to consult with the utility company to determine its policy for net metering. Other seasonal storage systems, such as pumped water storage to an elevated reservoir, are options, but these are typically useful only for large-scale systems.

Although the seasonal storage offered by a net metering situation optimizes the energy output of a PV system, the owner should perform a return on investment analysis to determine the actual savings vs. the PV field size. Some owners may wish to make their facility net-zero, meaning the PV system produces as much energy as the building requires during the year, even though it is drawing some power from the grid at certain times. An example of one free online tool for net metering available for small buildings is https://pvwatts.nrel.gov.

If net metering is not available, or if the site has no utility power, other software-based tools are available that consider on-site diurnal storage. One example is a PV F-CHART. F-CHART was a pioneer in early solar thermal analysis software. An internet-based search will turn up many others as well.

This paper does not go into detail about optimal PV system sizing as this is another topic that can get fairly complex.

If one does have the situation where sunshine is plentiful, and the weather is always about the same, diurnal storage disadvantages become less of an issue, and one may find it may offer the opportunity for higher percentage PV systems. In this case, a graph of the annual percent solar contribution would be more linear. Checking the PV panel area to optimize the return on investment would still be a good idea using one of the above-discussed software tools for diurnal storage PV systems.

This example raised the question in my mind about what happens if government policy attempts to utilize PV solar or solar thermal electric systems (and wind, since these have similar characteristics) for powering electrical grids with diurnal or near-diurnal storage without some sort of backup power plants. Samantha’s situation seemingly is a microcosm for what happens for utility-scale systems. My thinking is that perhaps political rhetoric may have oversold the capability of solar energy and wind systems as a renewable replacement for conventional power plants, such as fossil-fueled or nuclear plants. It seems more reasonable to think that solar and wind systems offer a way to reduce emissions when used in conjunction with other power sources and that a mix of low- or no-emission power sources is the key to future energy needs when coupled with conservation and smart grid technology.

Bruce Johnson, P.E., is a retired mechanical engineer. Contact him at bruce4795@gmail.com