This website requires certain cookies to work and uses other cookies to help you have the best experience. By visiting this website, certain cookies have already been set, which you may delete and block. By closing this message or continuing to use our site, you agree to the use of cookies. Visit our updated privacy and cookie policy to learn more.
Home » Using Cogeneration to Address Power, Heating, and (Sometimes) Cooling in Health Care Applications
Health Care HVAC

Cogeneration systems, also known as combined heat and power (CHP) equipment, use a single fuel source to generate electricity and utilize the exhaust gases to offset the heating load.

Trigeneration systems, or combined cooling, heating, and power (CCHP), use exhaust gases for both the heating and cooling loads. For large plants, the generators can be gas- or steam-powered turbines. Smaller plants can utilize gas or diesel reciprocating engines. The exhaust gases are passed through a heat exchanger to heat water or produce steam to be used for facility heating. When paired with an absorption chiller, the waste heat can be used to produce chilled water for cooling. CHP systems generally have a higher system efficiency than traditional systems that split power generation and heating. Traditional systems have an overall efficiency of around 50% with power generation, and transmission is typically 30%-35% efficient. The on-site heating system efficiency is around 80%, depending on the specific system. CHP systems can have an overall efficiency around 70%-80% by generating power directly on-site, thus minimizing transmission losses and utilizing the exhaust for heating or cooling energy. CHP systems also generally consume less fuel than traditional generation systems, therefore reducing the greenhouse gas and air pollutant emissions as well as being more efficient overall. By using cleaner fuels, such as biomass or biogas, those emissions can be further reduced. 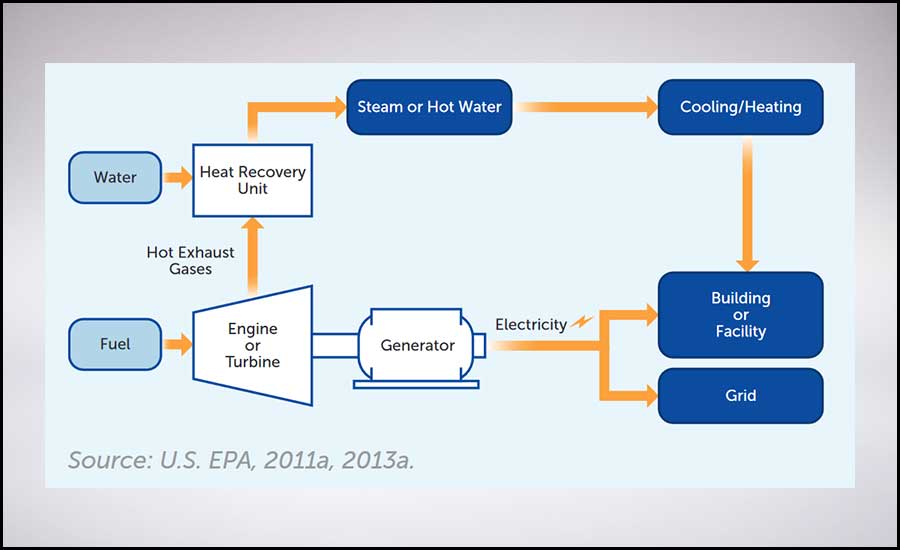 Some key factors in the design of a CHP for health care facilities include various local and national incentives, the utility rate structure, black start capability, and the type of generator to be used in the plant. The operation mode needs to be understood to determine whether the plant will be designed to primarily meet either the heating load or the power load. Part-load conditions should be considered when selecting this operation as a supplemental heating system or needing the utility to provide any power deficit that may be required.

Local and national incentives include considerations, such as direct grants, special tax incentives, or low-interest loans. The U.S. Department of Energy (DOE) has the Database of State Incentives for Renewables & Efficiency that compiles state and federal incentives and policies and should be checked for applicable credits during the facility design. The utility rate structure should be negotiated with the local service provider, as the provider could include provisions, such as a standby rate for the facility, so the utility infrastructure can provide the full load in the event the CHP plant should fail, interconnection agreements, the ability to sell excess power generated by the plant back to the utility, and any siting issues or permit requirements.

Black start capability is the ability for the CHP plant to come online without relying on the utility grid. This requires extra equipment, such as a battery pack or dedicated backup generator, and allows the facility to operate effectively during a crisis without relying on external factors.

The type of generator will be determined by the facility’s specific requirements, with each generator having different capabilities and costs. Reciprocating engines are primarily used for small-scale CHP systems having a capacity from 10 kW up to 10 MW per engine. Thermal output for reciprocating engines ranges from 2,900-6,100 Btu/kWh, with the thermal efficiency decreasing with increasing power generation due to increasing electrical efficiency in the larger generators. They are also useful as backup generators or for use in a black start system due to their smaller size, fast start times, and low installed costs. Gas turbines are used for larger-scale CHP systems typically ranging from 1 MW to 300 MW. Thermal output for gas turbines ranges from 3,400-6,000 Btu/kWh, with the thermal efficiency increasing with increasing power generation due to more or higher temperature exhaust that can be utilized. Steam turbines are also used for larger-scale CHP systems ranging from 100 kW to 250 MW. They are typically selected when a large amount of thermal energy is required where the heat output is the primary product with the electricity generated being considered a byproduct due to their low electrical efficiency compared to other types of generators. Steam turbine systems have a thermal output from 30,000-50,000 Btu/kWh and are most useful in industries or processes that generate steam that can be fed into the CHP plant to utilize as much of the thermal capacity of the steam without needing a boiler to burn excess fuel.

Dell Children’s Medical Center is a 590,000-square-foot, 248-bed hospital completed in 2007. It is recognized as the first hospital to be awarded LEED Platinum certification. Dell Children's utilizes a CCHP system with a 4.3-MW gas-fired turbine in an on-site utility plant built in collaboration with Austin Energy, the local municipal utility. The system supplies all of the hospital’s electricity, steam, and chilled water requirements. The turbine’s waste heat is used in a heat recovery steam generator to produce the steam used for facility heating, and a two-stage absorption chiller produces the chilled water for cooling. Excess electricity is sold to Austin Energy’s grid, while excess chilled water is distributed to nearby facilities. The system also includes an electric centrifugal chiller plant, two stand-by boilers, and a thermal energy storage bank. The plant has performed well since it was completed, offering up to a 50% reduction in energy costs compared to ASHRAE 90.1 guidelines. The plant has continued to perform well even with the addition of a third bed tower, completed in 2011, that added 75,000 square feet and 72 beds. A fourth bed tower addition is being evaluated currently and shows the capabilities a district energy plant provides for health care facilities to expand the hospital and services without needing to add many new systems, just adding connections to the central plant.

With the CHP system meeting 100% of the facility’s electricity, heating, and cooling needs, the hospital can continue operating uninterrupted during a power outage, allowing the hospital to function as refuge during emergencies or natural disasters and maintaining critical life-support systems. For added reliability, the hospital is also backed up by two connections from different substations from the local grid and a 1.5-MW backup diesel generator with black start capabilities and supporting emergency life safety systems. Alex Corvino is a mechanical engineer at WSP with two years of experience as an HVAC designer. He is a provisional member on ASHRAE committees for heat transfer, renewable energies, and global climate change. He has a passion for learning about energy-efficient design practices with plans to continue advocating for the implementation of sustainable systems within all industries. Contact him at alexander.corvino@wsp.com