Climate change caused by greenhouse gas emissions is a reality. Currently, our ever-growing need for energy is mainly fulfilled by fossil fuels. The carbon emissions from fossil fuels are the cause of this upset in the balance of the carbon cycle and affect the equilibrium between plants, animals, and natural events, such as a forest fire. Simply put, plants consume the carbon dioxide (CO2) and release oxygen (O2) while animals and forest fires consume O2 and release CO2. Hydrocarbons buried for millions of years are combusted to release energy, but we are left with great quantities of CO2 that are returned to the atmosphere.

One way to reestablish the equilibrium is to use renewable fuels. Renewable fuels are fuels produced from renewable resources. Examples include biofuels made from biomass and hydrogen produced with electricity made from hydro, tidal, wind, or solar energy. Renewable fuels produced from biomass generally start as plant material. As depicted by the carbon cycle principal (see Figure 1), growing plants absorb CO2 from the air and convert it into hydrocarbon through the process of photosynthesis. Energy, which is provided by the sun, is required to break up the CO2 molecule and rearrange it with other elements to produce the new plant material. The photosynthesis process also produces oxygen that is returned to the atmosphere. When biomass is used to produce energy, the hydrocarbons are transformed back into CO2, which releases energy that can be used in different ways. For example, an area of land produces wood that is used as fuel to heat a building. The CO2 from wood combustion is then used to grow the trees in this same area, thus closing the loop.

Today, we often hear about “drop-in” fuels. These are renewable fuels are specifically developed for use in existing, mass-produced, transportation vehicles and other equipment — ethanol blend gasoline, bio diesel, and, more recently, sustainable aviation fuels (SAFs). Drop-in fuels have great potential because of their large existing user base. However, they currently come at a higher price than conventional fuels. This could change in the near future as production processes improve and as fossil fuel prices increase. Another factor to consider are evolving regulations, which likely will continue to further restrict greenhouse gas emissions. Also, carbon trading could affect the economics. Figure 1: An overview of the carbon cycle.

Where does that leave boiler owners? Most installations currently fire natural gas, which is the cleanest of the fossil fuels. Having the highest ratio of hydrogen to carbon, natural gas is mainly composed of methane (CH4), which has four hydrogen (H) atoms for each carbon (C) atom. When it is combusted, natural gas emits less CO2 and more water (H2O). As a result of increased production in the U.S. during the 2000s, natural gas is now readily available and reasonably priced.

Basically, boilers are used to provide affordable energy for large energy users. To illustrate this, see the list of energy costs in Table 1, which displays the cost of conventional and renewable energy. For fuels, we use the lower heating value (LHV), which is more representative of the usable energy they provide. This is not applicable to electricity, which is a pure energy vector. Its cost is based on the average U.S. industrial price. When compared on an energy base value, it becomes evident that natural gas is, by far, the most affordable source of energy. Then comes ultra-low sulfur diesel (ULSD), which is 3.5 times more expensive than natural gas. You can see that drop-in renewable fuel costs are more than double the cost of ULSD. So, from an economical point of view, it does not make sense to use drop-in renewable fuels in boilers. Even an ethanol-producing plant is better off selling the ethanol and using natural gas to fire their boilers. How can we go green with boilers? First, there is a big technological advantage when comparing boilers with mass produced vehicles: burners. Burners can be made to efficiently fire almost any type of liquid or gaseous fuel. The fuel does not need to be designed to replicate natural gas or ULSD. This opens the door to other types of renewable energy — fuels made from biomass waste.

The food processing industry is a good example. Biogas/conventional fuel burners have been installed in potato processing, breweries, rendering, and other food processing plants. The feed stock used is renewable (vegetables, cereals, fruits) and, in many cases, a portion of the biomass input will be discarded as waste. Instead of paying to dispose of this waste, it can be used to produce fuel. This greatly reduces the mass of final waste and offsets the consumption of fossil fuel normally used in the process. 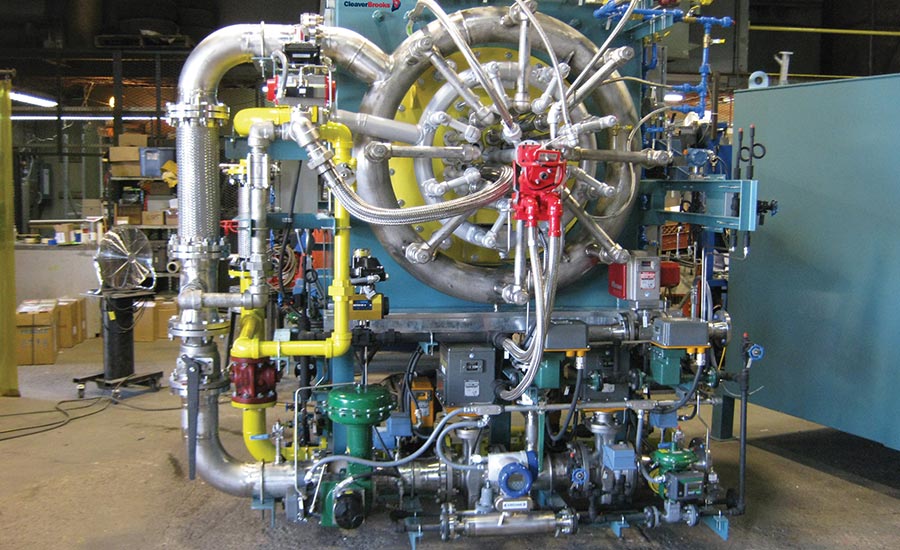 The transformation of the biomass waste into fuel is done in a reactor that uses a digestion process to produce the biogas, which is a mixture of methane, CO2, and water. The biogas can be fed to a boiler with a purposely built burner that typically fires the biogas and a conventional fuel, such as natural gas or fuel oil. This arrangement is very flexible as the burner will fire the available biogas and supplement the heat input with conventional fuel so that the steam demand can be met at all times. Also, the conventional fuel is used when the processing facility is starting up and no biogas is available.

In certain cases, biogas cannot be produced at the source but occurs downstream at municipal wastewater treatment plants and landfills. Wastewater plants produce a sludge that must be discarded. Again, a digester reactor will produce methane-rich gas with this sludge. The digester gas can then be fired to produce energy. In landfills, the production of methane happens underground as the biomass is decomposing. Because methane gas has 25 times the greenhouse gas effect of CO2, it is environmentally preferable to collect the methane and combust it to CO2 before releasing it to the atmosphere. Thus, producing useful energy with landfill gas becomes a win-win situation.

Using renewable electricity to produce hydrogen is a current topic of conversation. The idea is that the quantity of electricity made from wind or the sun does not necessarily follow the demand. If the excess could be stored or used otherwise, that would improve the total efficiency. Since batteries are currently out of the question, producing hydrogen with the excess renewable electricity is a solution that is considered. Burners firing pure hydrogen, or a blend of hydrogen and natural gas, are currently available. Mainly, they fire hydrogen that is a by-product of a different chemical process. So, firing renewable hydrogen could become an avenue in the near future.

Renewable fuels already include a wide range of liquid and gaseous options, and new production processes will bring even more possibilities in the future. Some manufacturers offer both custom and standard burner solutions for these fuels. The custom burners are specifically designed to fire the liquid and/or gaseous fuels of your choice. These low-NOx burners can fire more than one fuel at a time and can utilize controls that can adapt the individual firing rates based on fuel availability while meeting the steam demand of the plant. To keep pace in the industry, manufacturers must closely monitor the progress made in renewable fuel technologies and evaluate their burner product lines for use with these innovative fuels.