As the negative effects of climate change continue to manifest in extreme, deadly, and costly weather events, building design professionals remain aware that refrigerants used in buildings are a significant contributor — particularly fluorine-based refrigerants — to climate effects. Fluorinated gases comprise 3% of the total greenhouse gas emissions in the U.S., and 92% of these fluorinated gases come from refrigerants in buildings and vehicles, according to recent data released by the U.S. Environmental Protection Agency (EPA). Further, Project Drawdown, a global resource for climate change solutions, identifies refrigerant management as the No. 1 most impactful strategy in the construction industry. 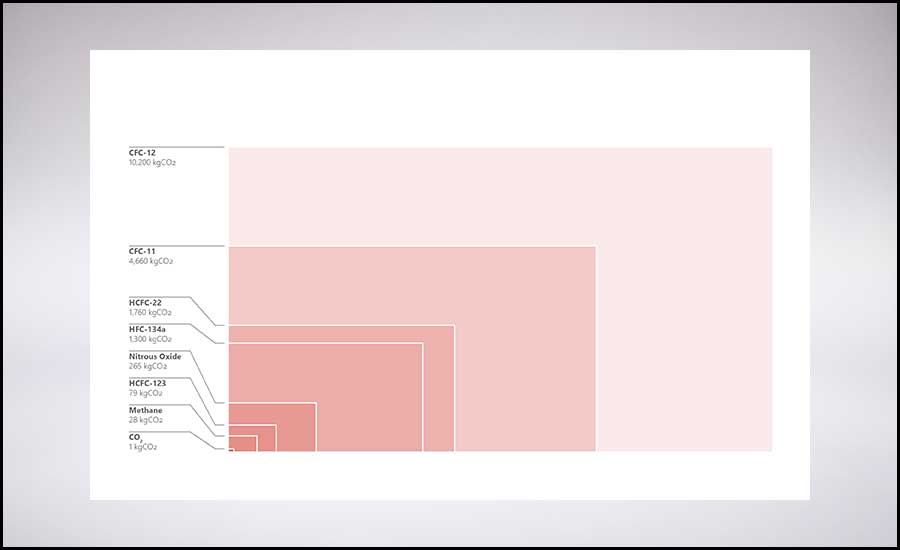 Initiatives such as the Montreal Protocol, the EPA’s Significant New Alternative Policy (SNAP) Program, and the California Cooling Act directly address refrigerants, and the engineering professions, owners, and the HVAC industry at large has begun to respond with refrigerant alternatives. However, more aggressive measures must be taken to further mitigate the global warming consequences, not to mention toxicity, flammability, asphyxiation potential, and other hazards caused by refrigerants.

The 1987 Montreal Protocol set a 2020 deadline for complete phaseout of refrigerants with high ozone depletion potential (ODP) in developed countries, specifically targeting chloroflourocarbons (CFCs) and hydrochlorofluorocarbons (HCFCs). In response, industries have converted to hydrofluorocarbons (HFCs), which do not deplete the ozone layer but still have a high global warming potential (GWP) due to the fluorinated gases. HFCs cause 1,000 to 9,000 times more warming than carbon dioxide does. Consequently, the Montreal Protocol added the Kigali Amendment in 2016, which calls for an 85% reduction in HFC usage by 2036 with incremental restrictions enforced as early as 2024. 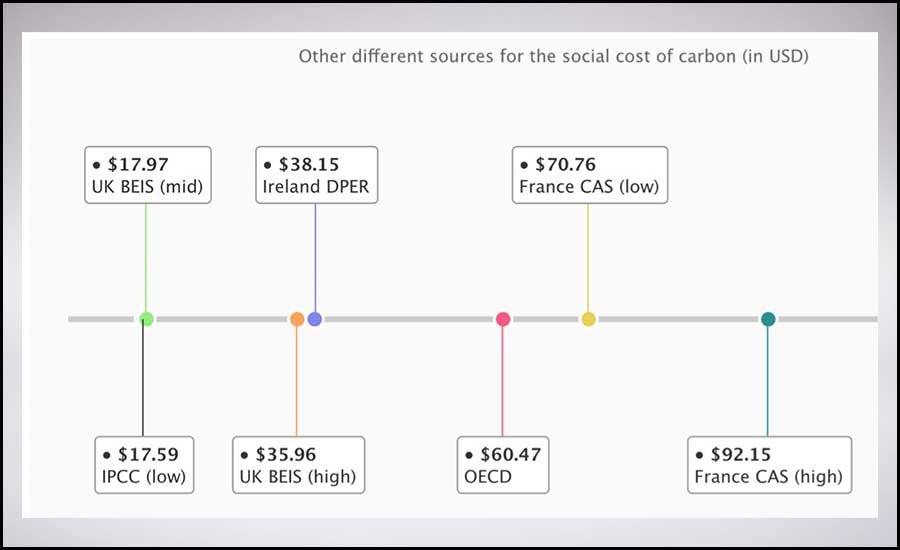 The social cost of carbon varies depending on the source quantifying the value. Photo courtesy Autocase

California is targeting a 40% reduction in HFC emissions from 2013 levels by 2030. In tracking this goal, California adopted two of the EPA’s major Significant New Alternatives Policy (SNAP) rules, which include the banning of various common refrigerants in new commercial chillers beginning in 2024. This will have a massive impact for HVAC engineers and chiller manufacturers, as many commercial chillers are currently only compatible with HFCs and will begin to lose their relevance in the market as these refrigerants are phased out. California is a large market, too. 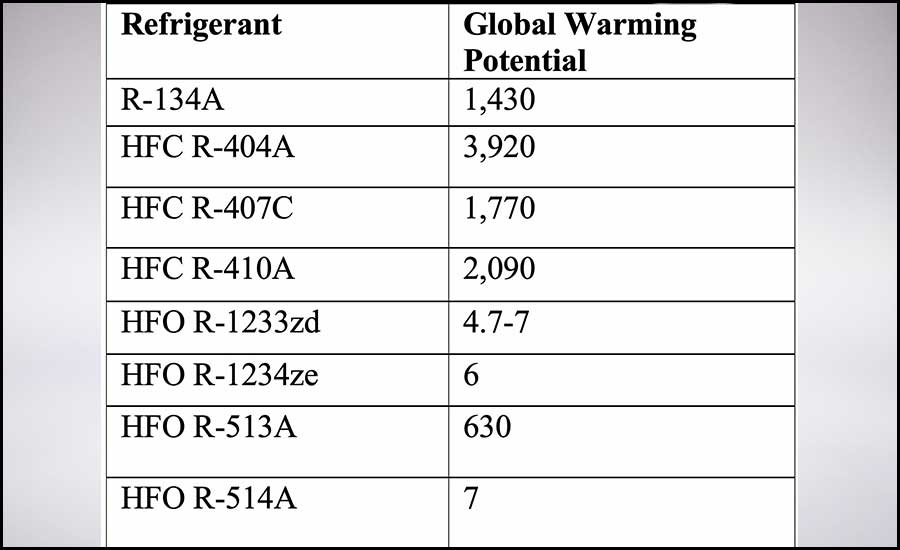 At this time, chillers are typically compatible with one of two refrigerants. The majority of chiller manufacturers specify R-134a for medium-pressure systems and R-410A for high-pressure systems. However, R-134A and R-410A will be banned or limited by the year 2024 in California. The ban on these types of refrigerants is expected to eventually encompass other commercial applications, such as variable refrigerant flow (VRF) systems.

With these benchmarks in mind, mechanical engineers and manufacturers are turning toward refrigerants with less impact on global warming, primarily hydroflouroolefins (HFOs). These “next generation” refrigerants offer similar performance to HFCs but exhibit less environmental impact with zero ODP and a very low GWP. While these HFOs still contain fluorine gas, the GWP is significantly lower than HFCs. For example, the GWP for R-410A is 2,090 — i.e., R-410A is 2,090 times more potent than CO2 in terms of its impact on climate change — and R-454B has a GWP of 466, which is a 75% reduction. Table 1 shows the impact on GWP of various refrigerants for comparison.

Additionally, some HFOs have drawbacks, such as flammability and toxicity, and, thus, further improvements are needed in next-generation refrigerant development as well. In addition to the negative effects of climate change, there is a social cost associated with greenhouse gas emissions, defined as a monetary value of future climate change-related damages, according to Erin Bishop, a senior economist at Autocase and author of a social cost analysis in a recent white paper with Buro Happold. Scientific consensus on the increasingly negative consequences of climate change for society due to rising temperatures include higher probabilities and intensities of extreme weather events, such as coastline flooding, droughts, heat waves, and wildfires, as Autocase reports. 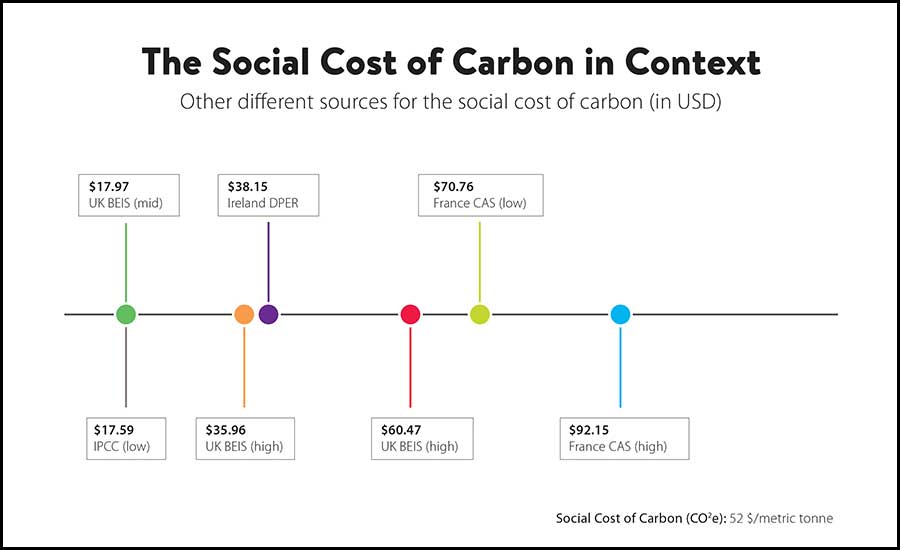 The social cost of carbon varies depending on the source quantifying the value. Graphic courtesy of Autocase

While there is no broad agreement on a universal social cost of carbon — it is inherently difficult to quantify — an emerging consensus sets the social cost at approximately $30-$100 per ton of CO2 equivalent, projected to increase over time.

What Mechanical Engineers Can Do?

According to Project Drawdown’s recommendations, the following strategies are considered effective in reducing the impact of refrigerants on the environment.

HVAC engineers have a significant opportunity to downsize the volume of refrigerant needed by reducing a system’s cooling capacity. This is achieved with energy reduction strategies, such as utilizing thermal storage for peak shaving, designing high-efficiency central plants, selecting airside energy-recovery systems, and specifying high-performance envelopes. These strategies will lower the building’s cooling demand, thereby reducing the plant size and thus the volume of refrigerant used.

In milder climates, design teams can also consider natural ventilation to downsize or eliminate mechanical cooling requirements. Strategically located operable windows coupled with large fans or boosted exhaust can significantly decrease the amount of cooling needed in a building. For example, on a recent project in Santa Barbara, California, the mild climate supported a natural ventilation and mixed-mode cooling design. In a baseline comparison with HFC refrigerant R-410A, with its GWP of 2,090, Buro Happold and Autocase estimated the quantity of carbon emissions avoided for the 150,000-square-foot facility. With a refrigerant charge of 550 pounds, a conservative 2% annual leakage rate, and an assumed 10% end-of-life leakage, it was estimated that by using natural ventilation, the building owner will avoid 200 tons of CO2 equivalent emissions, which is the equivalent of 476 MWh of electricity in Southern California.

Engineers should consider the opportunity to currently be active in specifying low-warming refrigerants, such as HFOs or natural refrigerants, where possible. Natural refrigerants have already been adopted in the food refrigeration industry, for example, but unique challenges have slowed its acceptance in the HVAC market. For example, ammonia offers high energy performance, is easily detected by smell, and is available at a low cost, but it’s toxic in higher concentrations, according to the U.S. Occupational Safety and Health Administration (OSHA). Carbon dioxide can be used as a natural refrigerant, but equipment compatible with CO2 may often be expensive.

To emphasize the impact of selecting alternate refrigerants, Buro Happold and Autocase quantified the environmental impact associated with Buro Happold having specified an HFO refrigerant on a recent project. The HFO selected, R-514A, has a GWP of 7 and is compatible with chillers manufactured by a handful of companies, including Trane. With a 3,000-pound refrigerant charge, after 20 years of operation, it was estimated the baseline scenario (R-134A) would emit approximately 753 metric ton of CO2 equivalent, and the HVAC system Buro Happold designed would emit only 3.7 ton, thereby avoiding 749 ton of CO2e corresponding to 929 MWh of electricity.

Next-generation refrigerants often offer comparable efficiencies to traditional refrigerants and require minimal modifications in equipment design, the cost of which is typically negligible across the life cycle of the equipment. There are instances where an alternative refrigerant will result in an efficiency loss or incompatibility with the desired equipment. Engineers should discuss these details with various manufacturers to determine the optimal solution for each project.

Ultimately, manufacturers have control over the environmental impact of their products. Rather than waiting for regulations to be enforced, engineers should encourage manufacturers to proactively work to create more HFO-compliant equipment. While a few HVAC manufacturers — including Trane, York, and others — are working to stay ahead of the regulations by offering select HFO-compliant equipment, there is much room for improvement by manufacturers in the industry overall. Engineers should hold manufacturers accountable for making improvements to their equipment and addressing all issues they come across via advocacy to regulatory agencies and lobbying for necessary code changes.

For more details on these case studies and discussion of these issues, see Buro Happold and Autocase’s recent white paper, Quantifying the Social Impact of Refrigerant Choices, The Role of Refrigerants in Climate Change … and What You Can Do About it.

Yensi Izquierdo, P.E., is an associate with Buro Happold and an accomplished building services design engineer with 10-plus years of experience in the AEC field and highly proficient in BIM workflows. Broad international knowledge with completed projects across five continents, Izquierdo is capable of leading mechanical, plumbing, and fire protection system designs from concept through building occupancy. His work is always driven by sustainable and innovative design aspirations.

Sara Kingman, LEED AP, TRUE Advisor, is a sustainability engineer at Buro Happold. As a member of the sustainability team in Los Angeles, she has gained valuable experience through a wide range of projects. Kingman has worked extensively on energy, water, and waste systems, including energy modeling for net-zero energy buildings, the design of net-zero water systems, the development of waste management building concepts for achieving zero waste, and the development of numerous building-level and master plan sustainability concepts. She has utilized her LEED AP accreditation by facilitating the LEED certification process for nine projects.