Circulation of Conditioned Air in the Era of COVID-19

More than 200 scientists recently published an open letter to major international health agencies, including the World Health Organization (WHO) about the emerging evidence showing the COVID-19 virus may be transmitted by airborne particles. In this scenario, the HVAC system becomes a hot topic about the role it plays in spreading the virus.

The majority of the HVAC systems in residential dwellings consist of 100% recirculation of conditioned air. This basically means the supply and return air are transported through an air-handling unit within the same enclosed space. The only fresh air blended into the system enters almost entirely by opening or closing doors or windows (not counting the occasional usage of kitchen and bathroom exhaust vents). Most older houses have wall-mounted return air grilles with space to house a 1-inch-thick pleated air filter. They usually have a MERV filter rating of 2-6, which has an overall efficiency of less than 50%. Most of newer houses have built-in filter plenums in the air-handling unit, which houses a 4-inch-thick air filter. The MERV rating is about 10-11, which has an efficiency of 85%. 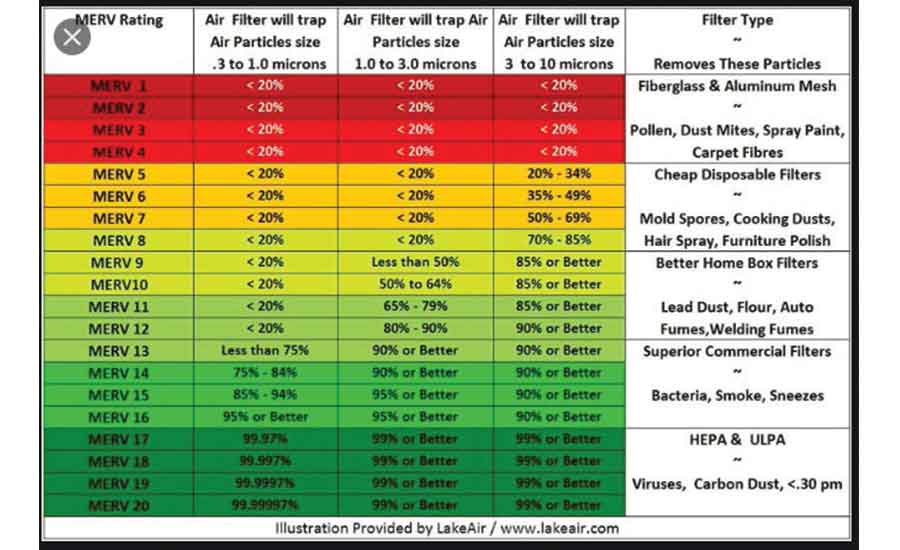 Minimum Efficiency Measure Value (MERV) is a measure of the efficiency of amount of airborne pollutants it removes. (Illustration courtesy of LakeAir.)
Click image to enlarge.

In the commercial and institutional establishments, most of the air-handling units are designed to meet ASHRAE requirements for IAQ. They utilize 10%-15% fresh air to make up for the exhaust air thru restroom vents and leakage due to the positive air pressure (less than 0.1 inch water gauge relative to outside). The majority of the air-handling units in the return air plenum have a band of air filters with a MERV rating of 11-12.

There are specialized environments, such as surgical room in hospitals, bio-medical research laboratories, chip making process in semiconductor industries, etc., that utilize 50%-100% outside air with HEPA filters (see Table II). Their filtration efficiency is at least 99.97% for particles larger than 3 microns. 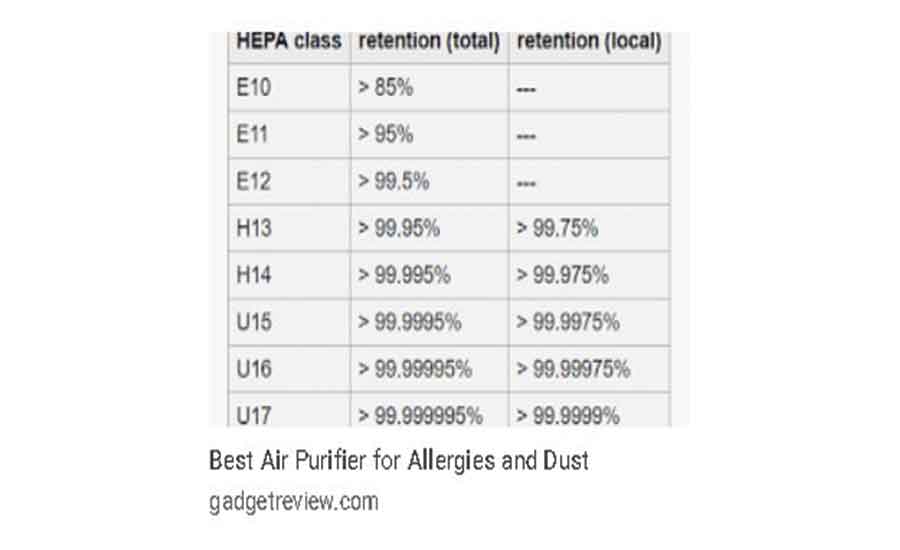 The best air purifiers for allergies and dust, according to Gadgetreview.com.
Click image to enlarge.

To understand how the virus is being spread, let us look at how the air filtration works in a circulated air environment. It is widely known by scientists that the size of COVID-19 virus is about 0.06-0.13 microns (one thousandth of one millimeter). The standard HEPA filter (H-13) can capture air particles no smaller than 0.3 microns. The surgical mask N95 has an overall efficiency of 95% (if it is properly worn) for capturing particles no smaller than 0.3 microns. This is probably why some people claim that masks don’t work because the size of the virus (see Table III). In commercial environments, such as restaurants, offices, and supermarkets, if one of the occupants has contracted COVID-19 and the virus is airborne as some scientists claim, it is likely that some percentage of the virus can escape the filtration system and spread out quickly to every corner of the occupied space thru the distribution network of the air duct system. To dispute this myth, we need to understand how HEPA filtration mechanism works (see Table IV). In a nutshell, particles are trapped/captured through a combination of three mechanisms: diffusion, interception, and impaction in a mat of synthetic fiberglass with diameter range from 0.5-2.0 microns and gaps (or pores) between the fibers about 3 microns. Based on that understanding, N95 masks can be 96% effective for particles with sizes as small as 0.007 microns (per 3M tests). 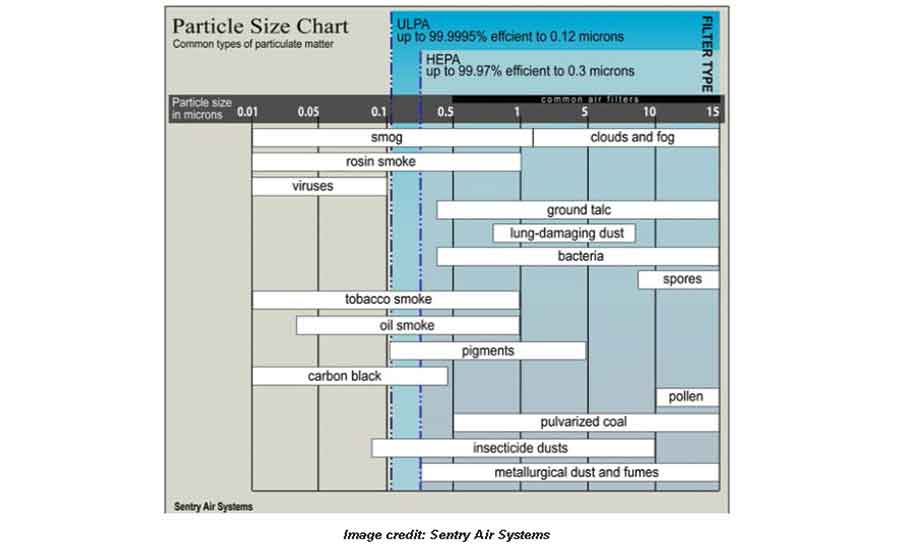 How do we mitigate the spread of COVID-19 in the current HVAC systems? There are ways to do it. Is converting to using HEPA filtration system is a very good choice? The HEPA filter has a much higher air resistance than the regular filter. It will drastically cut down the air supply and reduce the cooling/heating capacity. Practically, one needs to replace almost the entire HVAC system: that is the fan blower, mechanical drive, return air duct work, evaporator, and the condenser. Replacing with HEPA filter and retrofitting the air-handling unit are prohibitively expensive. But the building owners/operators need to find a balance between public health and costs (bottom line is the profit margin); however, the most cost-effective choice is just to upgrade the air filters. For residential dwellings, try to use the maximum MERV rating of 8-10 for 1-inch-thick filters and a MERV rating of 12 for 4-inch-thick air filters. For the commercial HVAC system, use the maximum MERV rating of no less than 14 without retrofitting the HVAC system. And it feels like having the equivalent protection as wearing an oversized N95 surgical mask in the air-handling unit. Most of the filter manufacturers often recommend replacing the filter every three months. This is normal operation before the pandemic happens. We can’t be inflexible during the COVID pandemic. In the city of Houston/Harris County, we have a health advisory system that classifies the community risks into four color-coded levels: red, orange, yellow, and green. Red is the most severe level that the community as a whole will encounter. Based on the advisory, the owner/operator of commercial HVAC system should replace the air filters according to a sliding scale of the risk levels, that is 3, 6, 9, and 12 weeks corresponding to the red, orange, yellow, and green level. For example, during the red level, the filter should be replaced every three weeks. During the orange level, the frequency should reduce to every six weeks and during the yellow level, the frequency should be every nine weeks. Returning to “new normal” operation of when the risk level is green. Additionally, increasing the mixing ratio of makeup and return air of a HVAC system will help to dilute the recirculating air. The damper at the makeup air ductwork can be adjusted to the maximum level, allowing more fresh air from the outside. This, in effect, will raise both the relative humidity and room temperature in the occupied space, especially during the peak load hours (noon - 4 p.m.). Scarifying the comfort level is a small and reasonable price to pay. Of course, the filter upgrade and more outside air will add additional operating costs to the property owners, but safeguarding the public health is a moral obligation and it should come first. 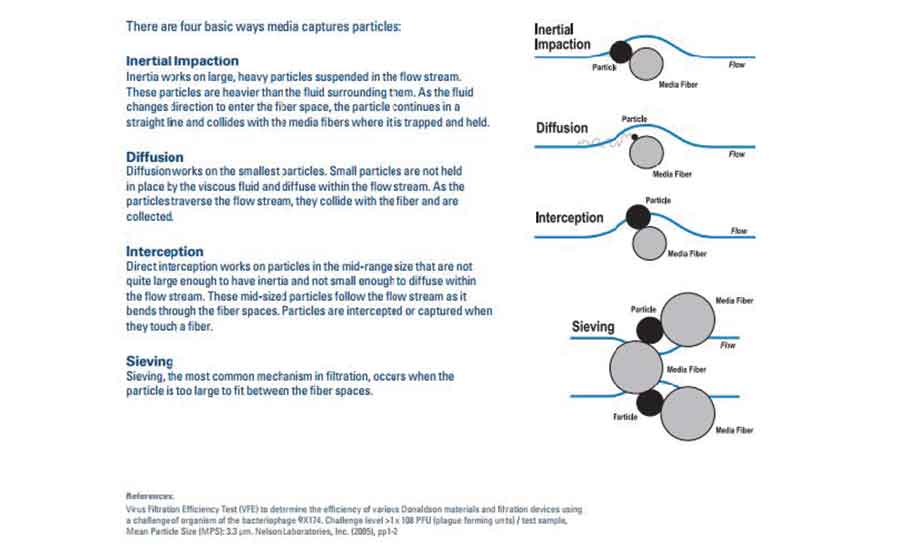 There are also various types of methods, including disinfecting the airborne virus such as photocatalytic oxidation, ultraviolet light, electrostatic ionization, anti-microbial fiber layer technology, dry chemical filtration, etc. Most of them are proprietary technologies and readers are encouraged to search for their best option.

Simon Lee, P.E., is a mechanical engineer with SNC-Lavalin. Contact him at simon.lee@snclavalin.com.