My career in building energy management and energy modeling began in the fourth quarter of 1973 when the “Oil Embargo” occurred. I was a military systems design engineer with Texas Instruments Inc. (TI) and a member of a small group that simulated or modeled systems by computers for the purpose of design and evaluating the performance of the systems. The systems we modeled, for which I was personally involved with, included the Shrike missile flight and control, laser guided bombs, the gas dynamics of pneumatic actuators, cannon internal explosion and projectile exit speed, the dynamics and impact of electronics with soil, and the dynamics of metal compression. This experience led me to the task, in 1974, of modeling the energy consumption of TI buildings for the purpose of defining what could be done to reduce energy consumption. I used building energy computer programs available at the time that were based on simulating the yearly energy use of a building using utility bills. I became convinced that the need was for a building energy model that could model the last 24 hours of energy use and could also model the real-time energy use of a building at any hour. To accomplish this, a building energy model would require the same level of detail and sophistication as was required to model military systems. I spent years looking for this 24-hour building energy model, but it never appeared. Upon retiring, I decided to develop my own building energy model. Here is the first of a series of papers that verify the System Energy Equilibrium (SEE) Model.

The objective of the SEE Model is to duplicate the hourly performance of real systems at all operational conditions. To accomplish this, the SEE Model must obey the laws of thermodynamics and input the nonlinear characteristics of the real system components and model all details that contribute to the performance. The objective is to develop a math model, solved by computer, of the real system that duplicates the real-time performance at all operating conditions within about 3%.

System models are used for real-time control of systems as evidenced by NASA on space missions. Modeling the flight of a space vehicle after it has returned to Earth is too late. Similarly, modeling the energy consumption of a building over the past year is too late and impossible to perform with reasonable accuracy8. The need is for real-time, 24-hour building and plant energy models, and an SEE Model offers that capability.

The development of the SEE Chiller Plant Model used three basic data sources to show the SEE Plant Model duplicates manufacturers’ data. First, Schwedler1 provides chiller/tower performance data for three plants as the load drops from a 1,000-ton design load down to a 300-ton load, and the wet bulb drops about 12°F below design wet bulb. Design wet bulb is different for each of the three cities. Second, the tower performance was verified against a manufacturer’s computer program for tower selection and performance3. Third, Trane2 provided chiller data that included the evaporator and condenser refrigerant approach temperatures, showing how it affects chiller kW. This Trane data was invaluable to the development of the SEE Plant Model.

The first task of a chiller plant model is the design of the plant. The second task, after the plant is operational, is to answer the question, “Is the plant operating as designed?” This is a difficult question to answer because the plant may never operate at peak design conditions, and, if it did, would data be taken? An SEE Model of the plant offers the opportunity to visit the plant under any conditions of weather and load. The model will define performance compared to “as-designed performance” of the plant as it operates at part-load conditions. Third, if the plant is not operating as designed, then the SEE Model provides a tool to evaluate and define why plant performance is substandard. Fourth, the SEE Model provides a means of defining control strategies and may become part of the control software. Fifth, the SEE Model offers the ability to visit the plant in future years and define plant degradation due to aging, bad control practice, or other issues. Sixth, the SEE Model offers a design tool for defining, upgrading, or expanding the plant. And, seventh, a SEE Model provides the opportunity to evaluate issues raised by Engineered Systems and other HVAC publications. In summary a (SEE) Plant Model:

This series of articles will show that the SEE Plant Model duplicates the chiller data of Schwedler, Trane, and Marley, verifying its performance. Model verification — the agreement of model with test data — was an absolute necessary step in my career as a designer of military products.

The principles of modeling demonstrated in this series of articles on plant modeling is applied to the modeling of a large office building defined by Pacific Northwest National Laboratory, Liu12. The building SEE Model10&11 has the ability to evaluate total building performance at real weather conditions13 and therefore provide building benchmark data at real weather conditions for any day. The fourth article in this series presents a brief discussion and a building plus plant schematic.

The following figures present the data of Schwedler, Trane, and Marley, demonstrating the challenge for the SEE Plant Model; a challenge met as demonstrated by later articles in this series.

Figure 1 gives the evaporator load and wet bulb conditions for the three chiller plants1. The evaporator load is the same for all, but the design wet bulb and decreasing wet bulb values are very different, illustrating the challenge for the SEE Plant Model to duplicate tower and chiller performance within reasonable accuracy of 1%-3%. Schwedler defines the tower cold water approach to wet bulb as different for each plant. The Kansas City (KC) tower approach is 4°, Long Beach (LB) is 9°, and Salt Lake City (SLC) is 10°. 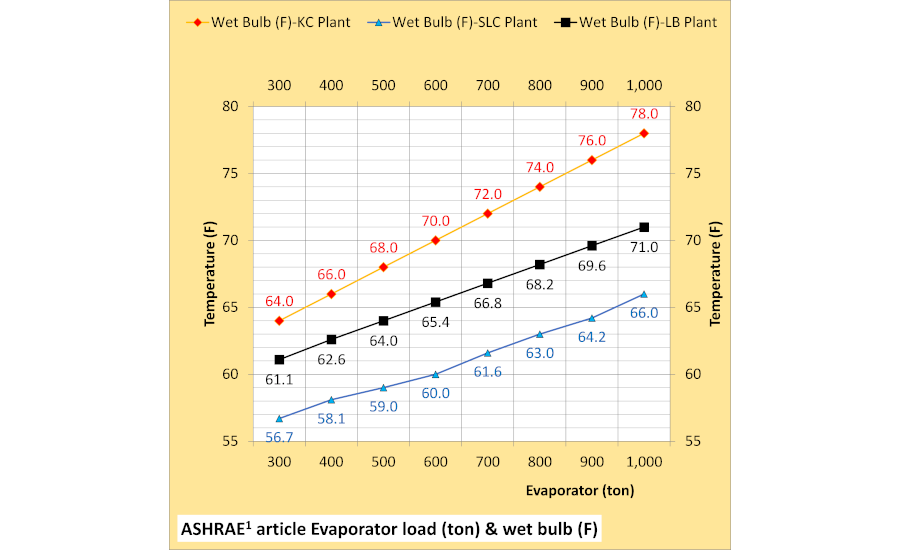 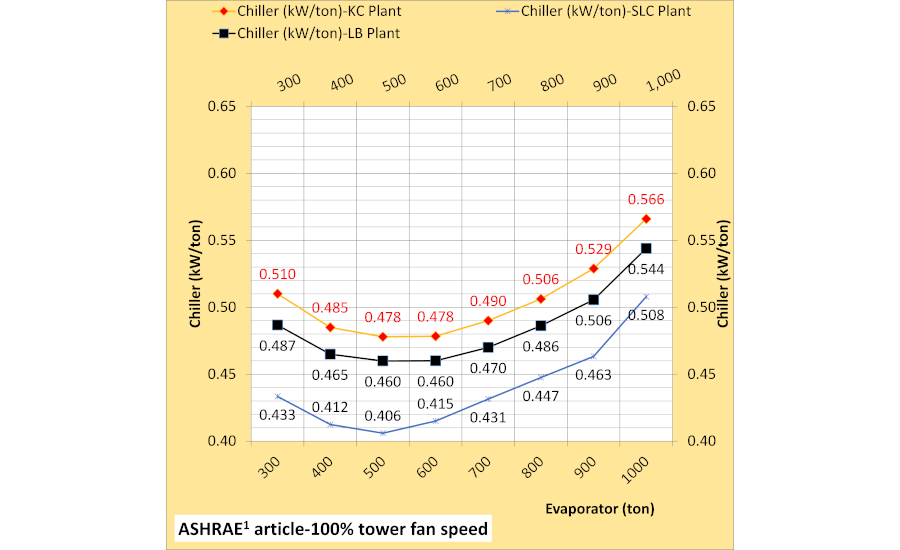 Both the SLC and LB chiller/tower become more efficient with 50% fan speed at about 800-ton and below evaporator load. The SEE Plant Model must duplicate this chiller and tower data of Figures 5 and 6 and does so within 3% as shown by future articles in this series.

Part 1 of this series has defined the challenges for the SEE Plant Model and duplicates the Schwedler, Trane, and Marley data. The evaporator load decreases from 1,000 ton down to 300 ton as the wet bulb decreases about 12° for both 100% tower fan speed and 50% tower fan speed. Computer simulating the Schwedler data required a very detailed set of chiller/tower equations that will be demonstrated by Parts 2, 3, and 4.

Table 1 is equally demanding of the SEE Model, requiring a detail model of the chiller condenser and evaporator refrigerant temperatures so that chiller lift can be defined. Part 3 will address this challenge.

An example of applying the SEE Plant Model can be reviewed by clicking http://kirbynelsonpe.com and click on “Prescription for Chiller Plants7.” Perhaps the greatest value of a 24-hour SEE Model is the ability to energy benchmark a building against real weather13 data on any day. Energy benchmark analysis of several cities can also be reviewed at the above site11.

Kirby Nelson, P.E., has been involved in the modeling of thermodynamic systems since the mid-1960s, First as a designer of military products including, missiles, cannons, etc., then as corporate energy manager, in 1974, for Texas Instruments Inc. He has three degrees in engineering all from Southern Methodist University. A life member of ASHRAE, he has presented numerous papers and is presently involved in the development of central chilled water systems simulation models. Contact him at kirbynelsonpe@aol.com.