This website requires certain cookies to work and uses other cookies to help you have the best experience. By visiting this website, certain cookies have already been set, which you may delete and block. By closing this message or continuing to use our site, you agree to the use of cookies. Visit our updated privacy and cookie policy to learn more.
Colleges/Universities HVACCommercial HVACCooling & ChillersCoronavirus CoverageCritical Facilities MicrositeGovernment/Institutional HVACHealth Care HVACHeating & BoilersHigh-Performance BuildingsHospitality HVACHVAC Design/Construction ProcessLife Safety

Over the last four weeks, Engineered Systems has tracked the results of two Clear Seas Research surveys that examined how architecture, engineering, and construction (AEC) firms and mechanical systems companies are navigating their way through the coronavirus pandemic.
The results of the third wave of this survey are now in, and the data, collected April 16-20, paints a more optimistic outlook that its predecessors.
In the most recent survey, 30% of AEC companies announced they intend to temporarily suspend employees (with or without pay) due to the COVID-19 pandemic. This is an 8% decrease from the April 2-6 survey, and a 10% reduction from the March 24-26 results.
As time ticks on, and the COVID-19 pandemic continues to evolve, Engineered Systems remains committed to providing the most up-to-date, pertinent information possible to help facility managers and consulting/specifying engineers manage their operations during this unprecedented time. The quotes included in this article were provided by those completing the survey. We hope you find this study worthwhile. 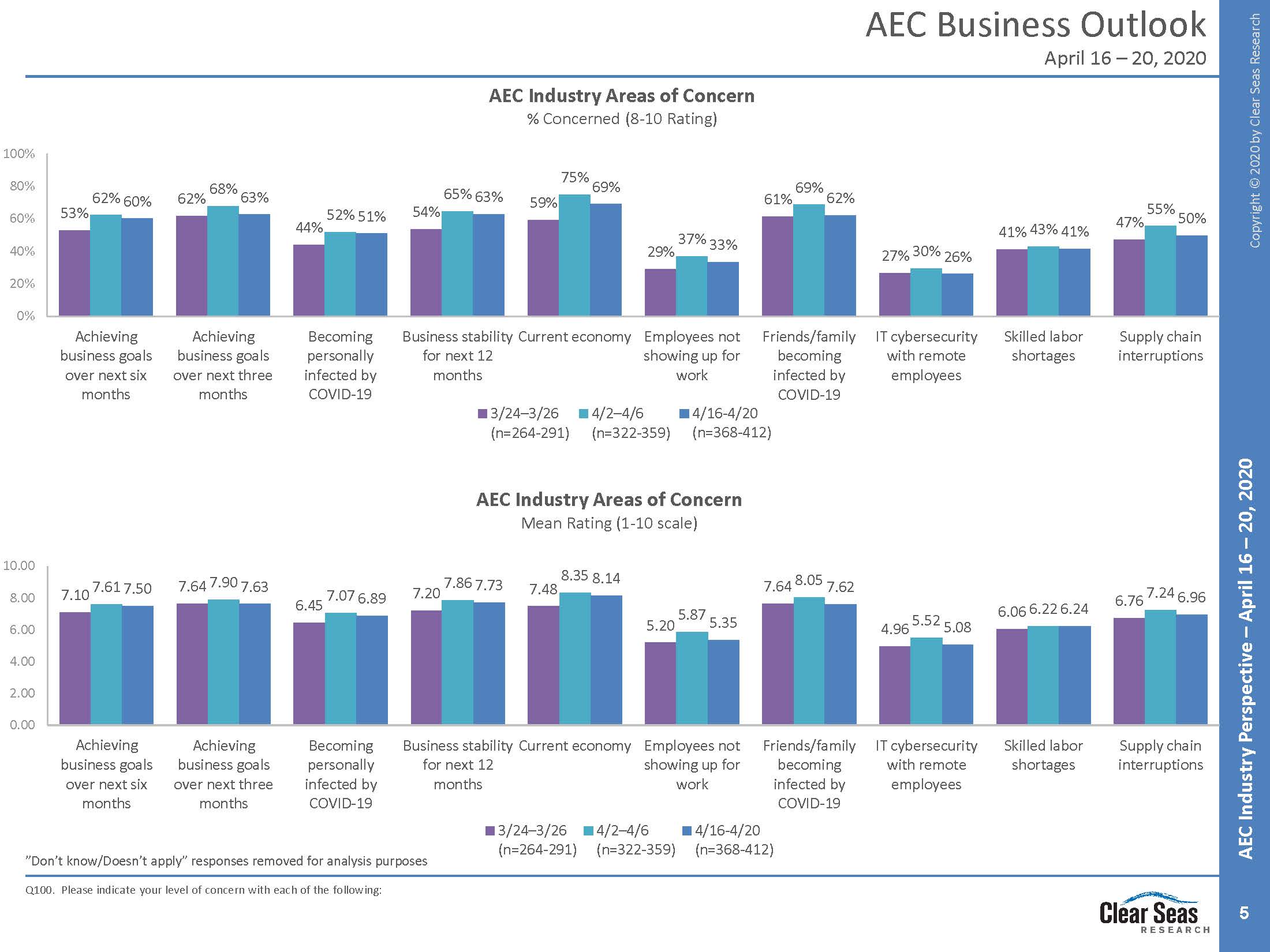 When asked to identify their biggest areas of concern, 69% of the AEC respondents identified the current state of the economy. This represents a 6% decrease from the April 2-6 survey. Sixty-three percent identified achieving business goals over the next three months as their second most pressing concern, representing a 5% decrease from the previous survey.
“We will do everything possible to maintain the economy of our country, as we are a small company but building giant dreams,” said one AEC respondent. 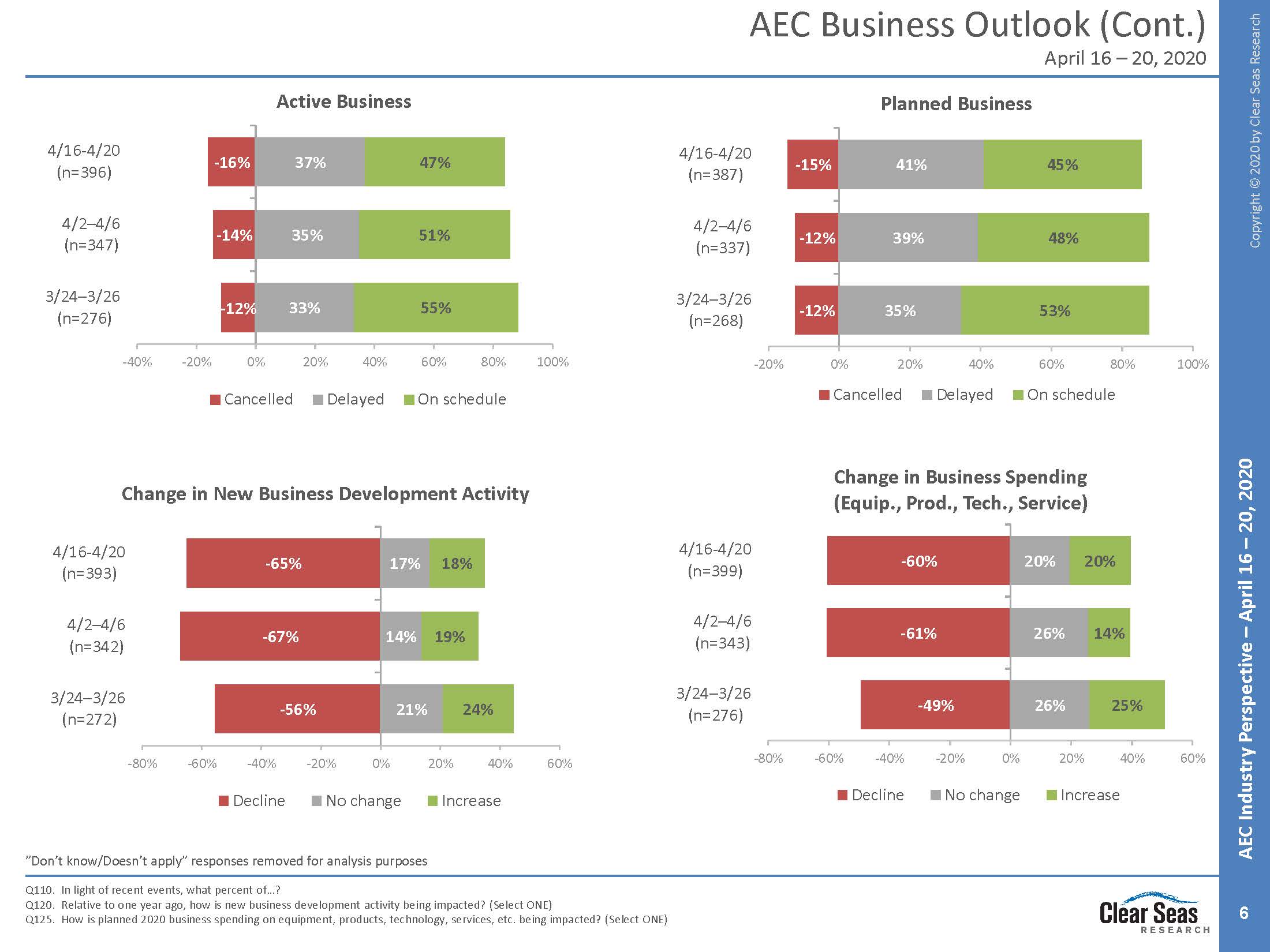 “We closed all operations on March 1 in order to protect ourselves and our customers,” said one Arizona-based AEC respondent. “We strictly followed our state guidelines, and, despite our shutdown, other similar businesses are ignoring the rules and using both special visa workers and illegal workers. It’s a truly unfair and irresponsible system.”

For mechanical systems respondents, 50% are completing business on schedule — a 4% drop from the first survey — 33% are reporting delayed projects, and 17% have had projects canceled.

Regarding planned business, 47% of responding companies report all business is being completed on schedule — a 6% decrease from the original Clear Seas survey — 40% have experienced delays in planned work, and 13% shared that some of their planned projects have been cancelled. 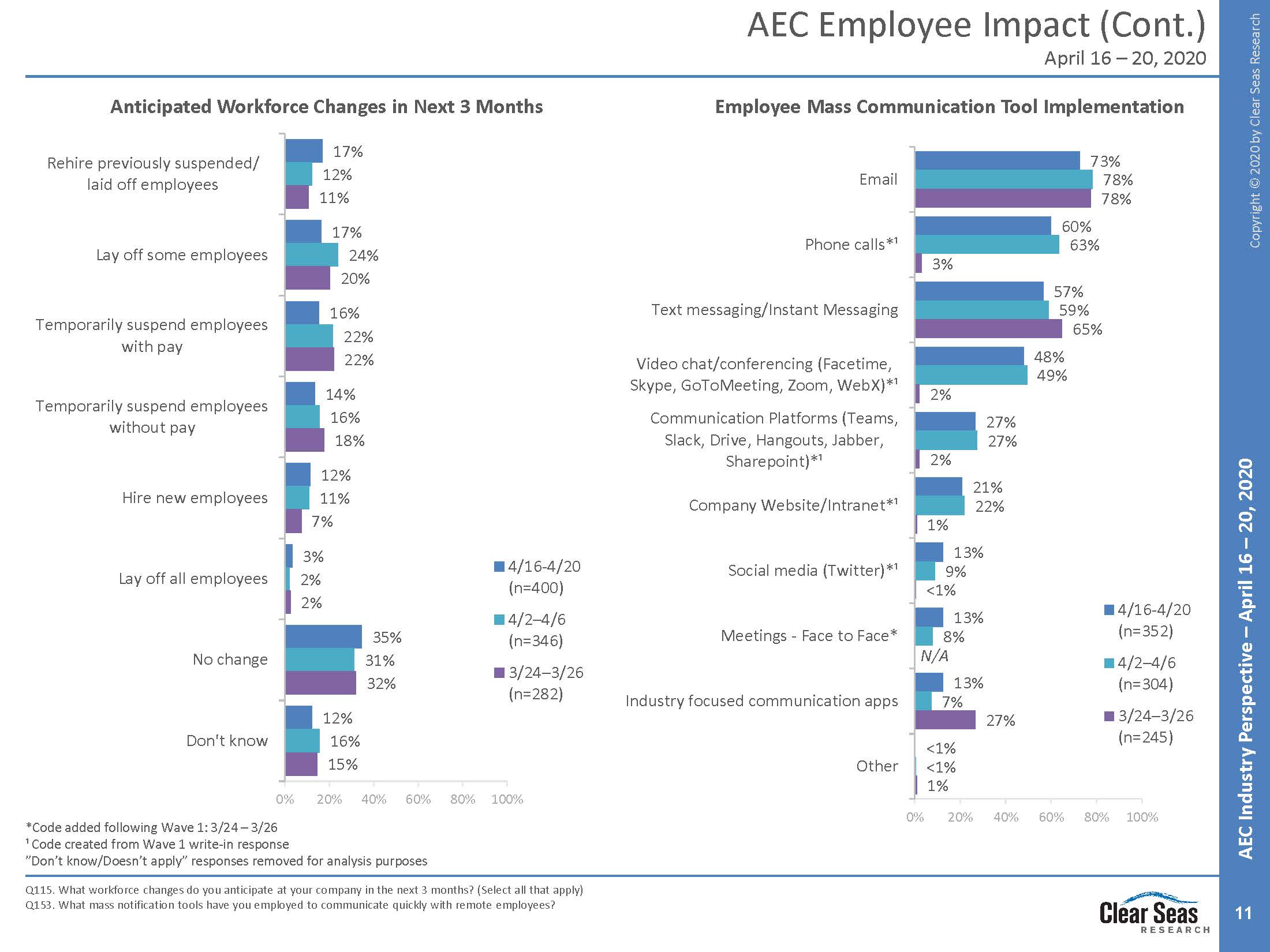 Of the 416 responding AEC firms, 17% hope to rehire previously suspended and/or laid off employees in the next three months.

“We may allow more employees to continue working remotely from now on as the company is performing well in this new mode,” said one AEC respondent.

For mechanical systems respondents, that number increases to 46%, which is down 23% from the April 2-6 survey. In the third-wave survey, 19% intend to lay off some employees, 16% plan to temporarily suspend employees without pay, and 11% intend to suspend employees with pay.
Of the 93 mechanical systems respondents, hope to rehire previously suspended and/or laid off employees in the next three months. 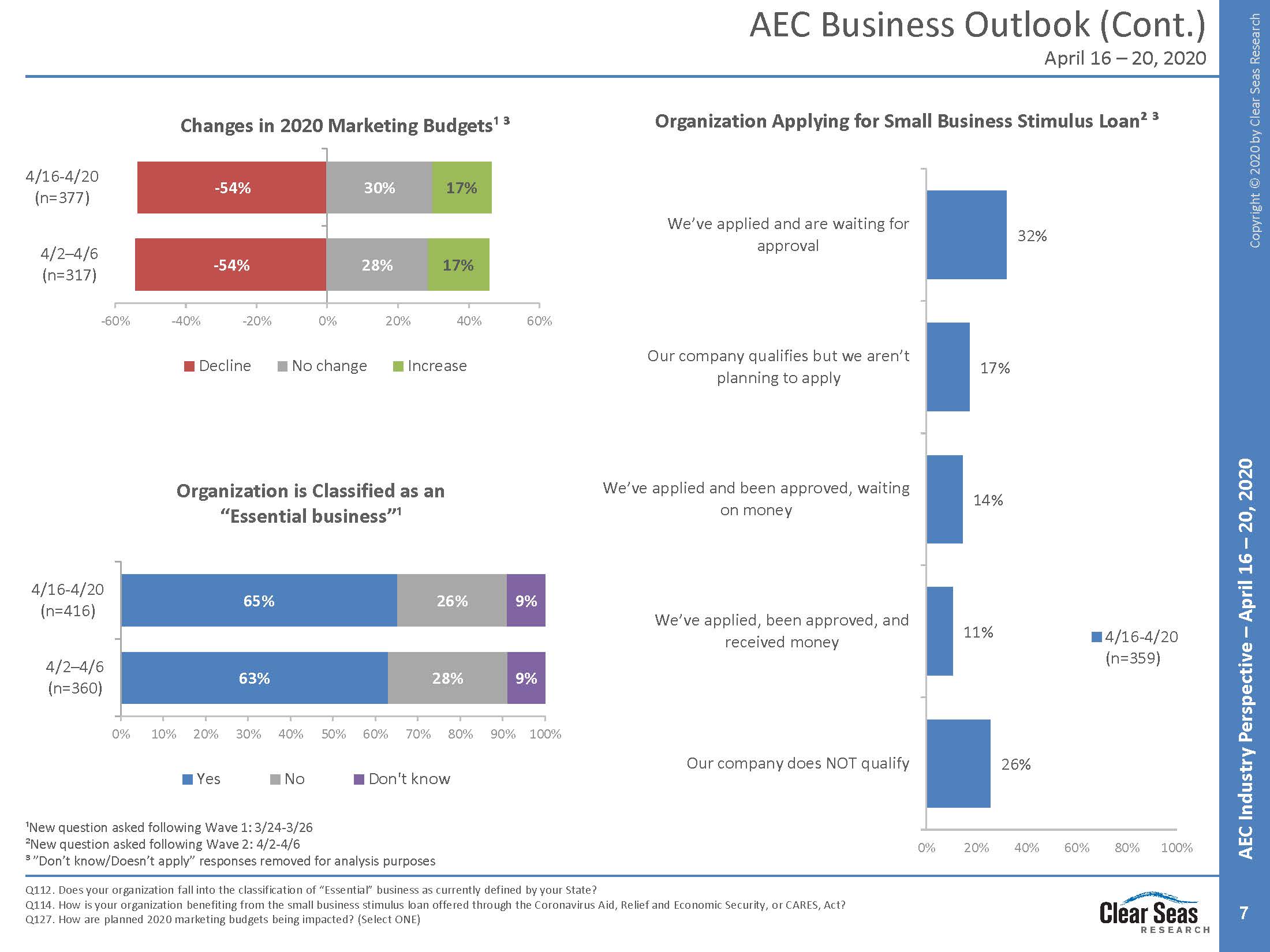 Regarding the state of business operations, 65% of AEC respondents said they were experiencing declines in new business activity — a 9% increase from the first survey — while only 18% reported increases in new business activity.
“Architecture is dependent on a growing economy, and this economic downturn will need to recover before it grows,” said one AEC respondent. “Architects may need to turn to other revenue streams besides billing for projects that will be constructed.”

A total of 60% of AEC respondents have experienced a decline in new business spending an 11% increase when compared to the first survey.

In the mechanical systems industry, 76% of respondents said they are experiencing a decline in new business activities, and 77% noted a decline in business spending.

Many AEC and mechanical systems companies are interested in applying for small business stimulus loans.

Many respondents said the government assistance program ran out of money before their application was approved.

“We have been told that there are no more funds available,” said one mechanical systems respondent. “This will have a major impact, as business has dropped off significantly. We fear laying off trained and high-quality people only to lose them to competitors. We are noticing and reading in the news that other industries and entities are receiving assistance, while the government is ignoring building trades. We are concerned at the lack of government foresight and care about the trades.”

A total of 65% of AEC respondents said their work is classified as “essential” in their state, while 26% said they were not considered essential, and 9% were unsure.

For mechanical systems companies, 88% noted their companies have been identified as essential.

“How and why is a business essential?” asked one AEC respondent. “We provide architectural and engineering services, primarily for public works and transportation projects, and we’re not essential. “In Texas, general construction is still deemed an essential service.” 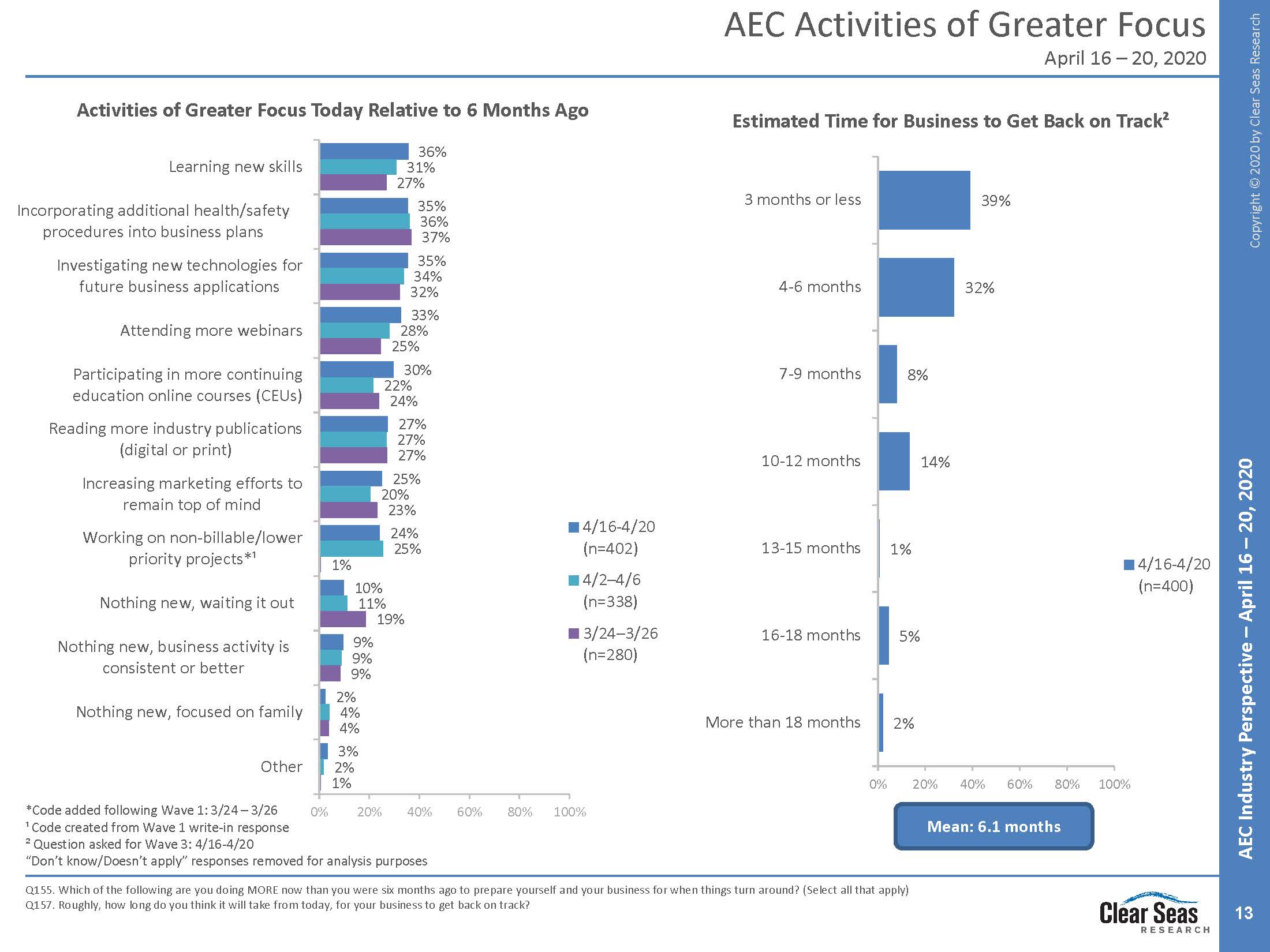 We all want to know how much longer our lives will be impacted by the COVID-19 pandemic. When asked to define the estimated time it will take for a business to get back on track, 39% of AEC respondents said three months or less, 32% said four to six months, and 14% said 10-12 months.

When asked to list the areas they are devoting greater focus to when compared to their activities of six months ago, 36% of AEC respondents said learning new skills, 35% said incorporating additional health/safety procedures into their business plans, and 33% said they are attending more webinars. 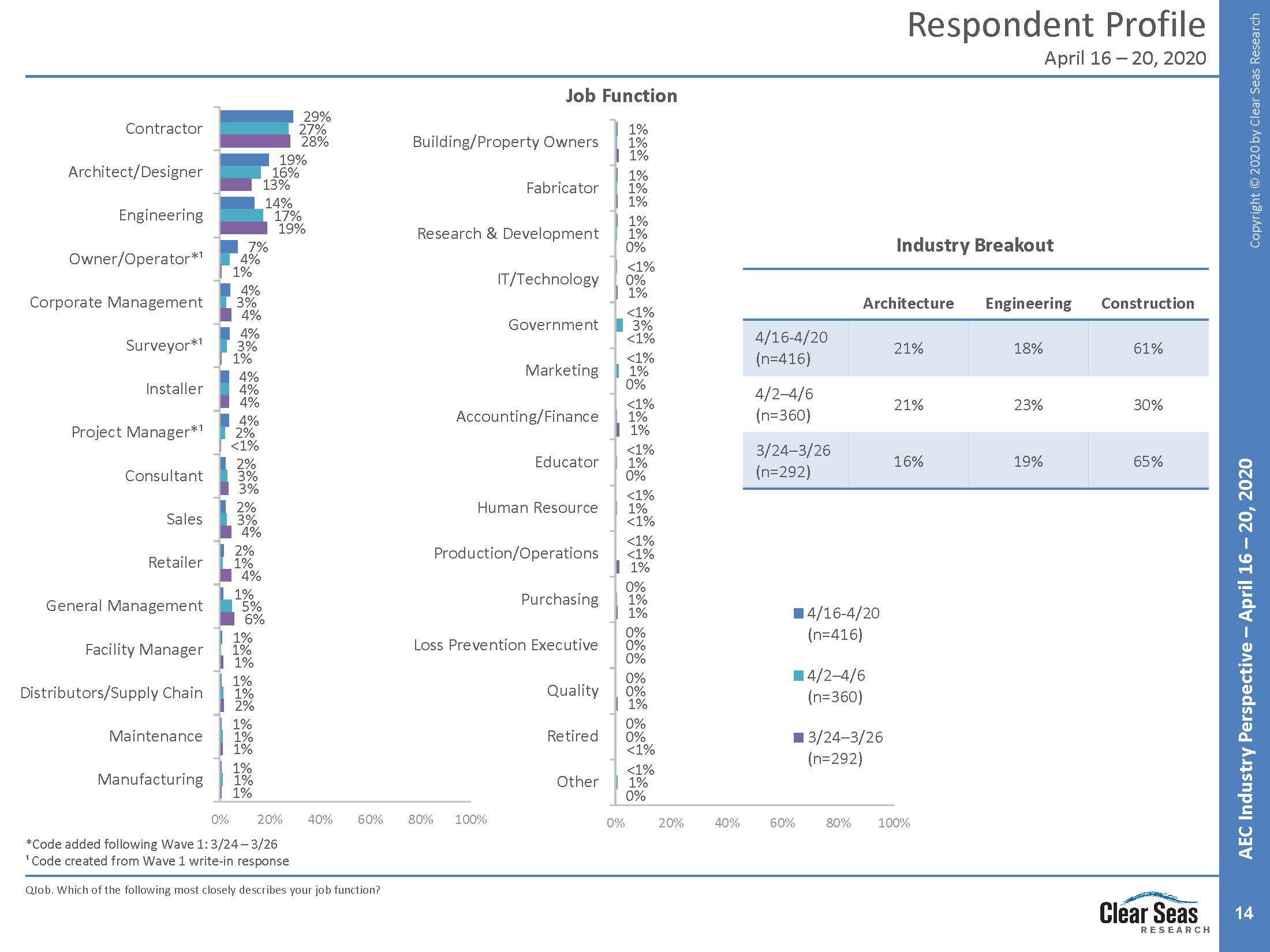