This website requires certain cookies to work and uses other cookies to help you have the best experience. By visiting this website, certain cookies have already been set, which you may delete and block. By closing this message or continuing to use our site, you agree to the use of cookies. Visit our updated privacy and cookie policy to learn more.
Home » Coronavirus Survey: 1 in 2 AEC Firms Seek Small Business Stimulus Loans
Commercial HVACCoronavirus CoverageCritical Facilities MicrositeGovernment/Institutional HVACHealth Care HVACHigh-Performance BuildingsHospitality HVACHVAC Design/Construction ProcessHVAC RetrofitsIAQLife Safety

The COVID-19 pandemic has infected an estimated 4.8 million people worldwide and claimed the lives of more than 319,000. While the threat remains, rates of

It is becoming increasingly more apparent that business protocols recognized as “normal” in 2019 may not resurface for months or even years.

Over the last six weeks, Engineered Systems has tracked the results of three “Industry Perspective on the Challenges of Today” surveys, presented by Clear Seas Research, that examined how architecture, engineering, and construction (AEC) firms and mechanical systems companies are navigating their way through the coronavirus pandemic. The fourth-wave results are now in, and the data, collected April 30 to May 4, provides a comprehensive examination of how opinions have changed over the last six weeks, where we are today, and what the future may hold.

As time ticks on, and the COVID-19 pandemic continues to evolve, Engineered Systems remains committed to providing the most up-to-date, pertinent information possible to help facility managers and consulting/specifying engineers manage their operations during this unprecedented time. The quotes included in this article were provided by those completing the survey. We hope you find this study worthwhile.

AEC firms are feeling more and more confident about retaining employees over the next three months.

On the mechanical systems side of the survey, 20% of respondents said they intend to temporarily suspend employees with or without pay. This is down 8% from the initial survey, when mechanical companies expressed the most pessimistic view on the topic. 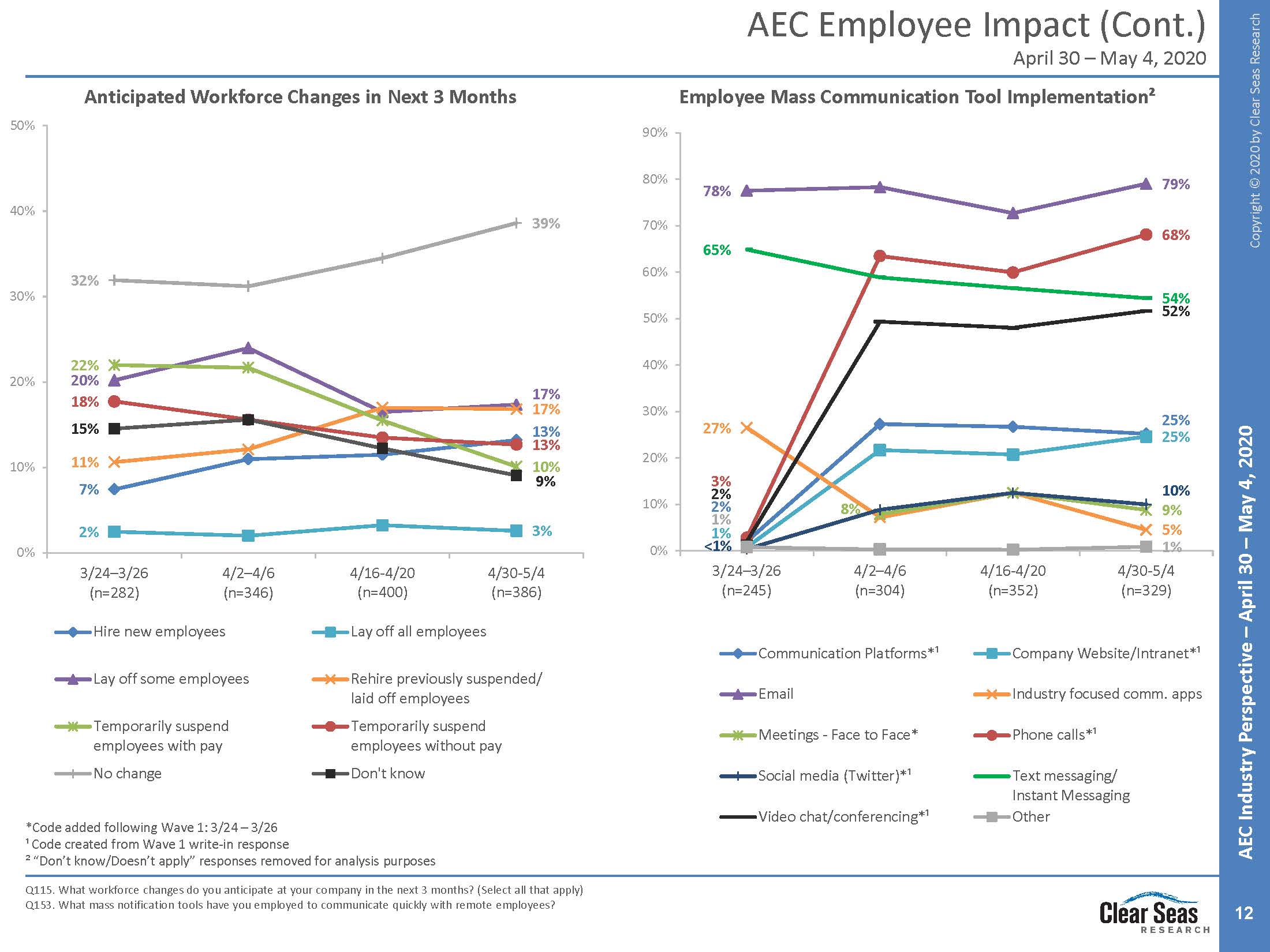 When asked to identify their biggest areas of concern, 71% of the AEC respondents identified the current state of the economy. This represents a 12% decrease from the initial March 24-26 survey. Fifty-nine percent identified business stability over the next 12 months as their second most pressing concern, representing a 4% decrease from the previous survey, conducted April 16-20.

Regarding the economy, responses ran the gamut with one respondent saying, “The economy is re-opening too soon. The sacrifices we've made will be for naught. I feel badly some businesses will not survive, but people will not rush out to restaurants and venues, and this will not make a significant economic impact. However, it will be in detriment to the containment of the virus.”

Another respondent placed blame on the Democratic Party, stating, “It feels as if the COVID-19 non-pandemic has been politicized with governors in Democratic, liberal states not moving on the economy and using their power to keep people out of the workforce. This is a gross overstepping of authority that is not warranted.”

Sixty-eight percent of mechanical systems respondents identified the current state of the economy as their chief concern, while 60% expressed concern regarding their business goals over the next three months.

“We saw a sharp decline in business and a few cancellations when the initial hunker down order was put in place in mid-March,” said one respondent. “Thankfully, we have rebounded and caught up to where we were at this time last year.” 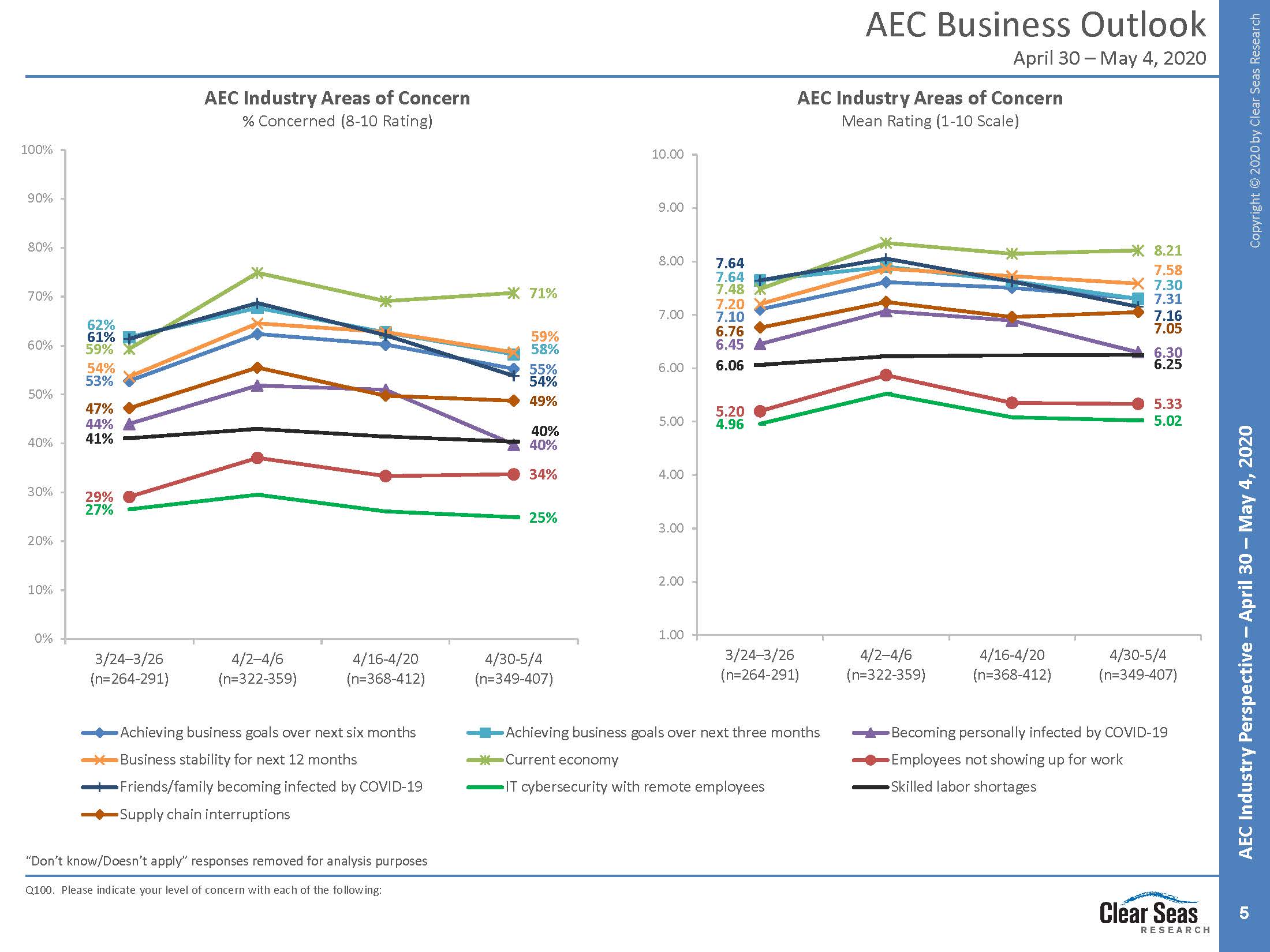 Getting Back to Work

For mechanical systems respondents, 53% are completing business on schedule — a 3% increase from the first survey — 35% are reporting delayed projects, and 12% have had projects canceled.

Regarding planned business, 51% of responding mechanical systems companies report all business is being completed on schedule — a 4% increase from the most recent survey — 39% have experienced delays in planned work, and 10% shared that some of their planned projects have been cancelled. 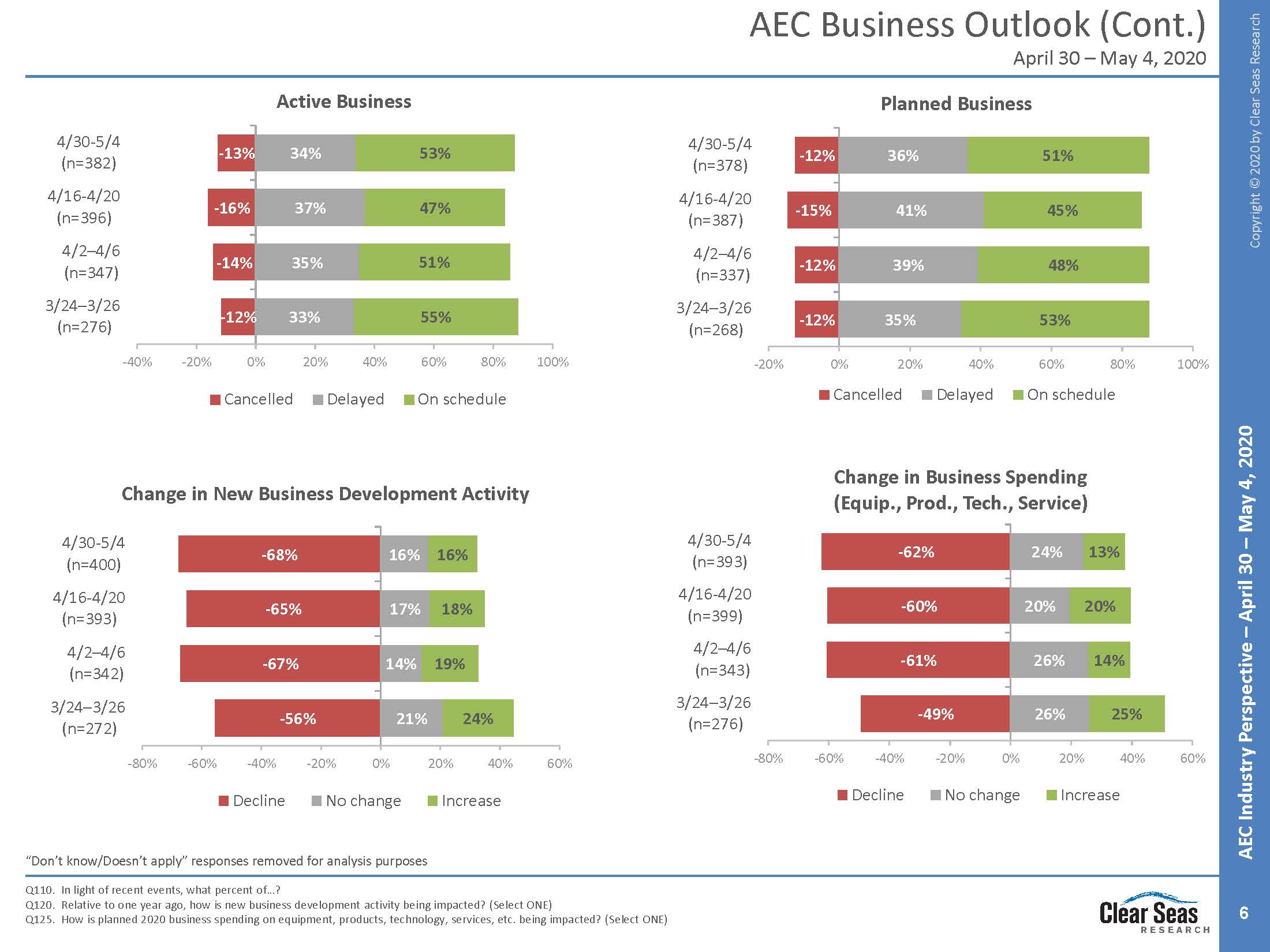 Over the next three months, 20% of AEC firms stated that they intend to lay off some or all employees, a 6% decrease from the April 2-6 survey.

Of the 408 responding AEC firms, 17% hope to rehire previously suspended and/or laid off employees in the next three months — up from 11% in the initial March 24-26 survey.

“We predict changes in company spending on safety and employee retention,” said one AEC respondent. “Medical coverage for employees and expenses for disinfecting facilities will play a role.” 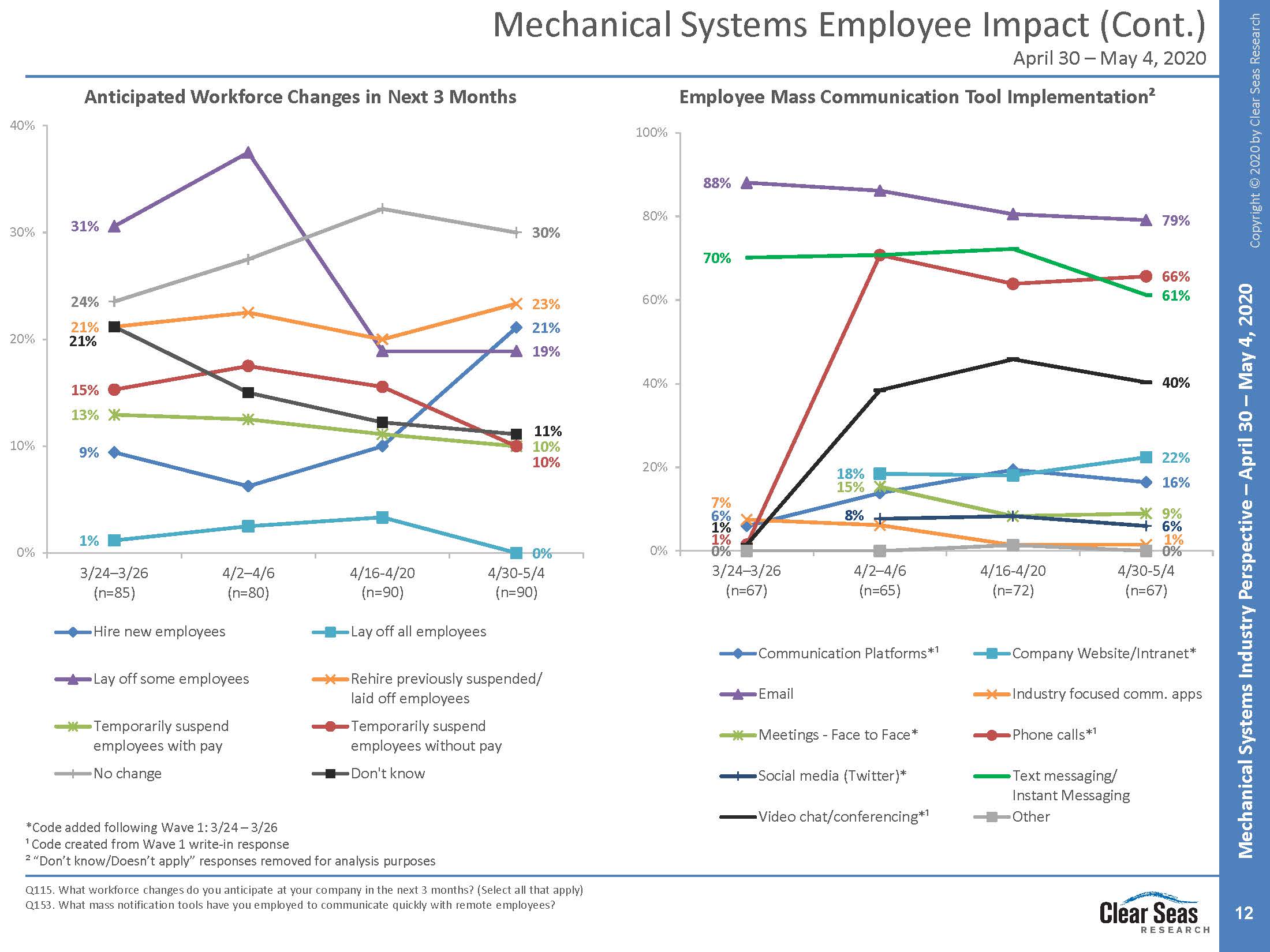 “Architecture is dependent on a growing economy, and this economic downturn will need to recover before it grows,” said one AEC respondent. “Architects may need to turn to other revenue streams besides billing for projects that will be constructed.”

A total of 62% of AEC respondents have experienced a decline in new business spending, charting a 13% increase when compared to the first survey.

In the mechanical systems industry, 77% of respondents said they are experiencing a decline in new business activities and a decline in business spending. 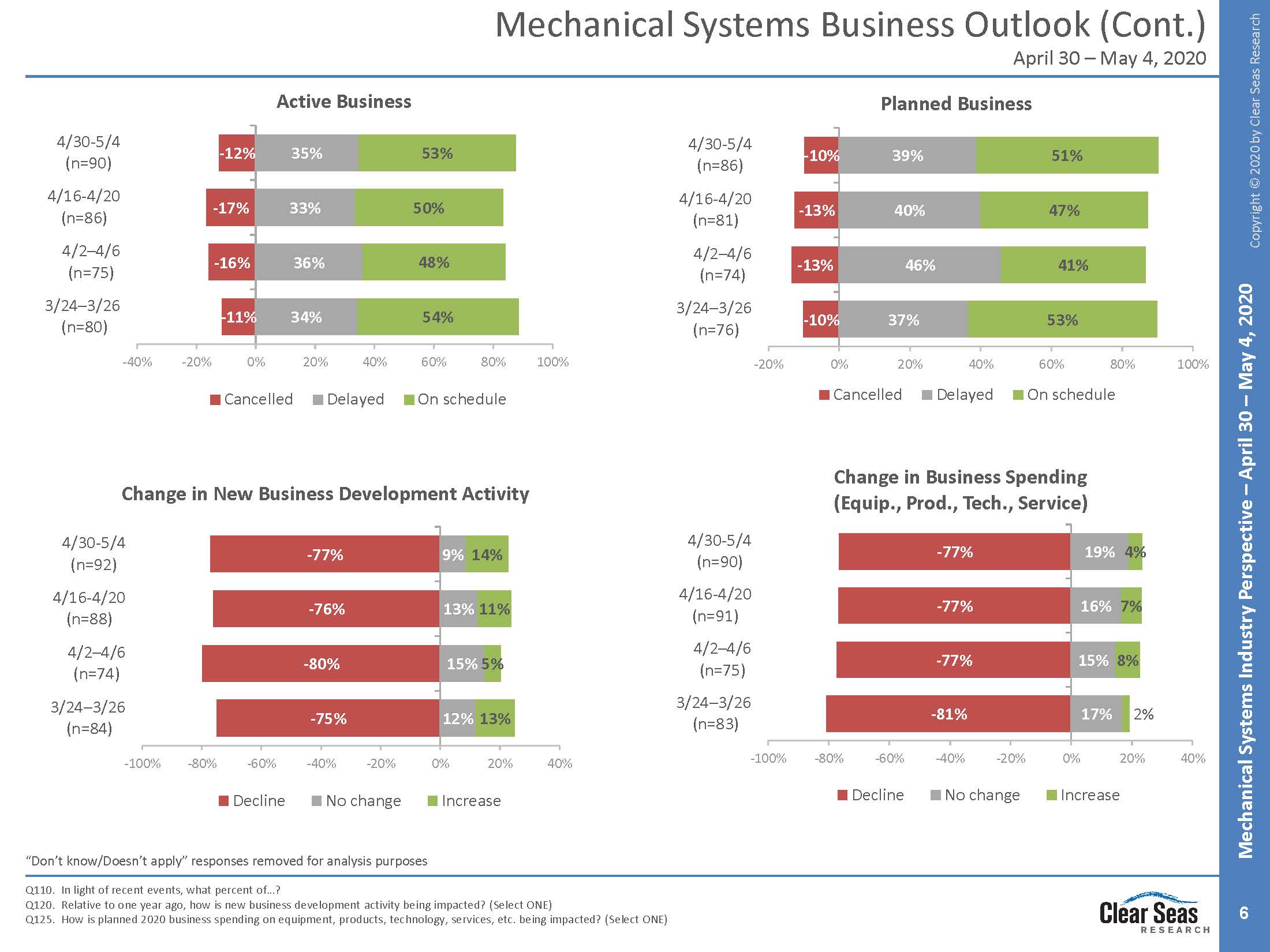 Many AEC and mechanical systems companies are interested in applying, or have applied, for small business stimulus loans.

A total of 50% of AEC respondents have applied for a small business stimulus loan. Of that 50%, 23% have been approved and received the money, 15% have applied and are awaiting approval, and 12% have been approved and are awaiting the payment. Twenty-two percent of firms said they do not qualify for the funds, and 22% said they qualify but aren’t planning on applying. Six percent of AEC firms applied but were denied due to a lack of funding or other concerns.

“We’d like to know where the proper channels are for companies to get help with business loans,” said one respondent. “I’m not referencing these worthless websites that give you the runaround, or people who want to charge you to help you, but the true, legitimate websites where you can go to gain assistance with government loans.” 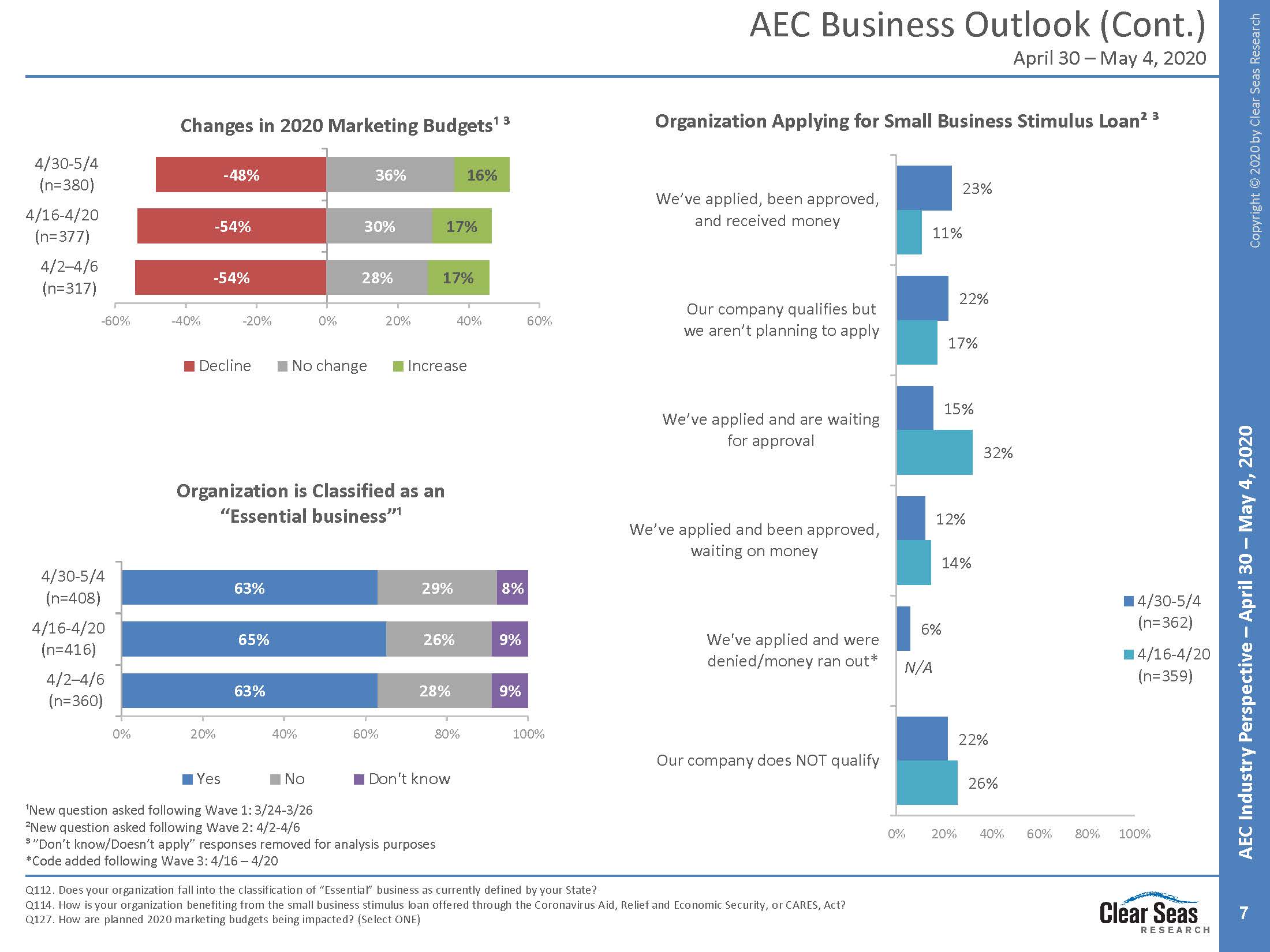 When Will it End?

We all want to know how much longer our lives will be impacted by the COVID-19 pandemic. When asked to define the estimated time it will take for a business to get back on track, 42% of AEC respondents said three months or less, 27% said four to six months, and 16% said 10-12 months.

Mechanical systems companies held similar opinions, as 42% said three months or less and 22% said four to six months. In the most recent survey, 21% of mechanical systems respondents said the estimated time to get back on track is 10-12 months — a 12% increase over the previous survey.

When asked to list the areas they are devoting greater focus to when compared to their activities of six months ago, 40% of AEC respondents vowed to incorporate additional health/safety procedures into business plans, 33% said they intend to attend more webinars, and 31% intend to attend more continuing education online courses. 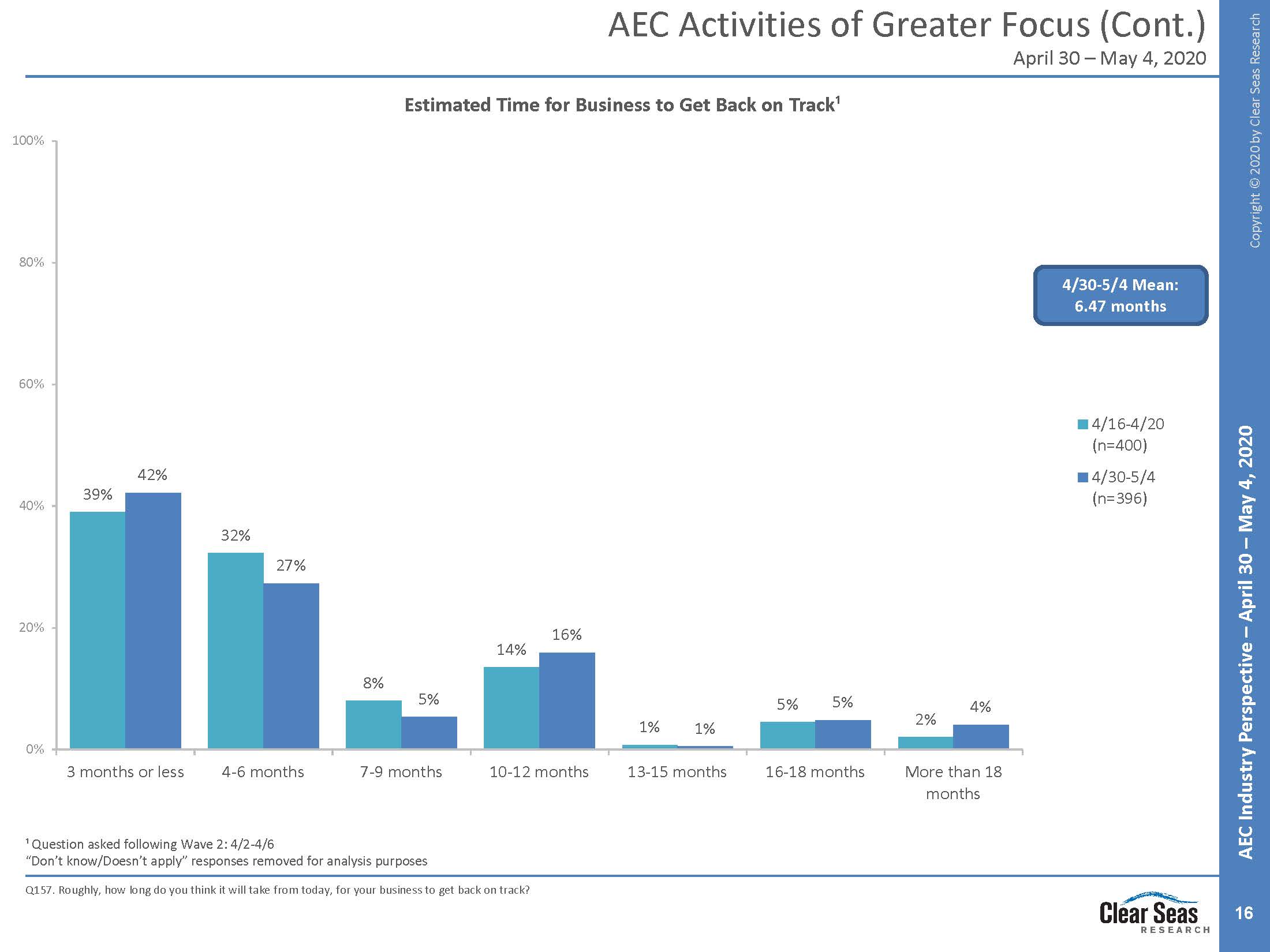 For more information, or to see the entire fourth-wave survey, visit www.clearseasresearch.com/totalreport.

The Politics of Pollution

Video: Discussing the Future of LEED with Melissa Baker