In a budding agricultural sector, the authors make a case for protecting airstreams and surfaces from unwanted microbes that, unchecked, can send a substantial investment up in smoke.

The cannabis market is among the fastest-growing in the United States, especially since being fully legalized in several states (Figure 1). According to a new report from New Frontier Data, cited in Forbes Magazine, the legal cannabis market is projected to grow at a compound annual rate of 17%. By 2020, medical cannabis sales are expected to be at $13.3 billion and adult recreational sales at $11.2 billion. By that same period, the industry is expected to create more than 25 million jobs.

As the industry shifts from small, unregulated cultivation rooms to larger commercial-scale operations subject to oversight, cannabis production is becoming more sophisticated. Part of this transition involves protecting crops from damaging airborne microorganisms that might proliferate in room air and cause the plants to develop mold and powdery mildew. Not only can such microbes ruin the crop, but they can force the entire facility to shut down due to health violations.

There are a variety of naturally occurring airborne microorganisms that can cause plants to develop mold or a powdery mildew, rendering them worthless. Standard HVAC systems can actually increase this threat as these damp and dark systems offer a perfect breeding ground for for microbial growth. Worse still, ventilation systems are very efficient at spreading microscopic spores throughout a building. Figure 2 shows a breakdown of the most common molds present in indoor air. 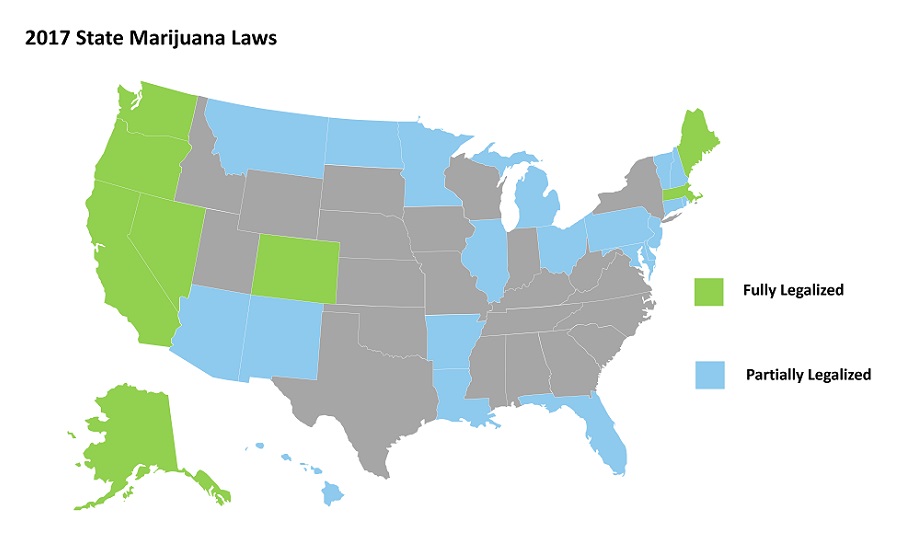 Air filtration systems can keep the indoor growing area free of airborne fungal spores. Botrytis cinerea spores (commonly known as gray mold) are approximately 11-12 microns in diameter (Gull 1971), and this size spore will be nearly completely removed by filters rated MERV 12 and higher. Even dust filters of the lowest rating (MERV 6-8) may remove 50% of spores from the air and, with multiple passes (via recirculated air), spores may be completely removed (Kowalski 2006 & 2009).

While air filtration provides protection against airborne spores, it has a downside for agricultural production. Humidity levels necessary for cannabis plants to thrive can cause filter media to become damp, encouraging the captured microbes to proliferate.

The Botrytis cinerea spores hail from the outdoors and are brought into indoor cultivation rooms by shoes and clothing. They are also found as common contaminants in about half of indoor environments in the USA, with mean concentrations of about 45-49 CFU/m3 (Shelton 2002). 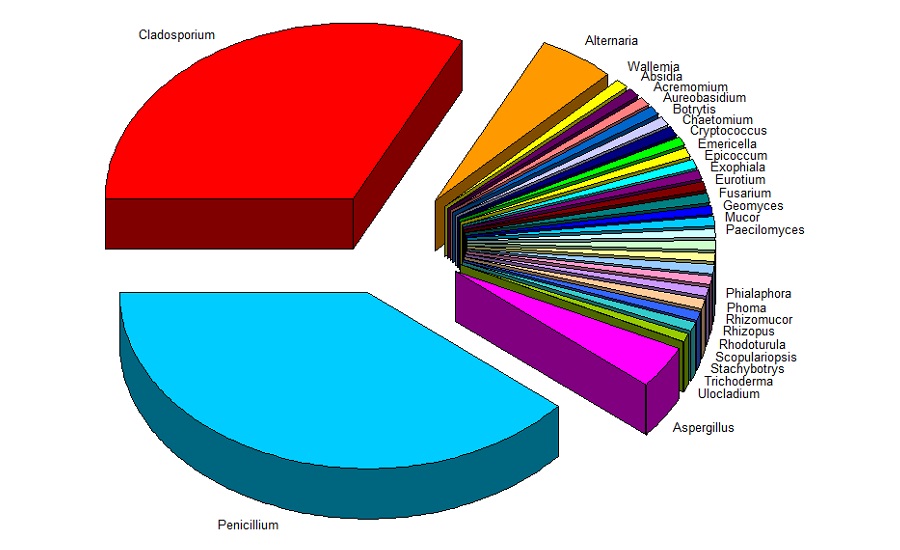 FIGURE 2. The most common indoor molds.

It is therefore important that workers clean and decontaminate themselves prior to entering a sterile cultivation environment. Normal disinfection procedures, such as those used in hospital environments, can be adapted for cultivation rooms.

Other methods to control Botrytis cinerea include traditional fungicides, but some of these methods may leave hazardous residues that are not suitable for consumption by seriously ill patients (Cervantes 2006). Organic methods are also being studied, including the use of competing or parasitical microorganisms (Wu 2013, Schumacher 2011, Costa 2013).

The air quality inside cultivation rooms can also be controlled using air filtration and positive pressurization, while interior disinfection can be accomplished with chemicals like bleach.

Although the aforementioned methods can be effective in combating microbial threats to cannabis production, the cleanest, most direct way of inactivating them is to use ultraviolet germicidal irradiation (UVGI).

In fact, scientists have yet to find a microorganism that’s totally immune to the destructive effects of UV-C, including superbugs and all other antibiotic-resistant microbes.

Airstream disinfection systems employ UV-C lamps to target pathogens from outdoor and/or return air (which contain airborne pathogens). Kill ratios over 99.9% on a first-pass basis have been modeled and, as air is recirculated, concentrations are further reduced by each subsequent pass (“multiple dosing”).

Surface-cleaning UV-C systems provide 24/7 irradiation of HVACR components to destroy bacteria, viruses, and mold that settle and proliferate on coils, air filters, ducts, and drain pans. UV-C prevents these areas from becoming microbial reservoirs for pathogen growth that will eventually spread into airstreams. They also can provide first pass kill ratios of airborne pathogens of up to 30% with ancillary benefits of restored cleanliness, heat exchange efficiency, and energy use (ASHRAE 2011- Fencl 2013/2014).

Latorre et al (2012) tested the effectiveness of UV-A, UV-B, and UV-C irradiation on Botrytis cinerea and found UV-C to be the most effective spectrum. The study employed a Philips model F15T8BLB with 20W of UV output. Results indicated zero survival of conidia (spores) at the highest UV dose of 1,100 J/m2.

Mercier et al (2001) used UV-C irradiation in the range of 400-4,500 J/m2 with a General Electric G30T8 UV lamp (30W of UV output) to control the decay caused by Botrytis cinerea on bell peppers. Spore germination was inhibited both in vivo and in vitro, with spore survival rates of 0-5% after a total UV dose of 4,400 J/m2.

Marquenie (2002) irradiated Botrytis cinerea spores using five fluorescent UV lamps of 8W UV output each, and the results show a single stage curve up to the maximum tested dose of 1,000 J/m2. Figure 3 summarizes the results of the three aforementioned tests, which indicate a classic two stage decay curve. The first stage of decay, which is often the most important in disinfection applications, varies from kf = 0.0022 – 0.0093 m2/J. The mean value for the first stage decay constant of Botrytis cinerea is therefore k = 0.0052 m2/J. The range of D90 values, or the dose required for 90% disinfection of spores, is approximately 440-2,000 J/m2. This range of UV susceptibilities compares well with other fungal spores such as Aspergillus or Penicillium (Kowalski 2009). 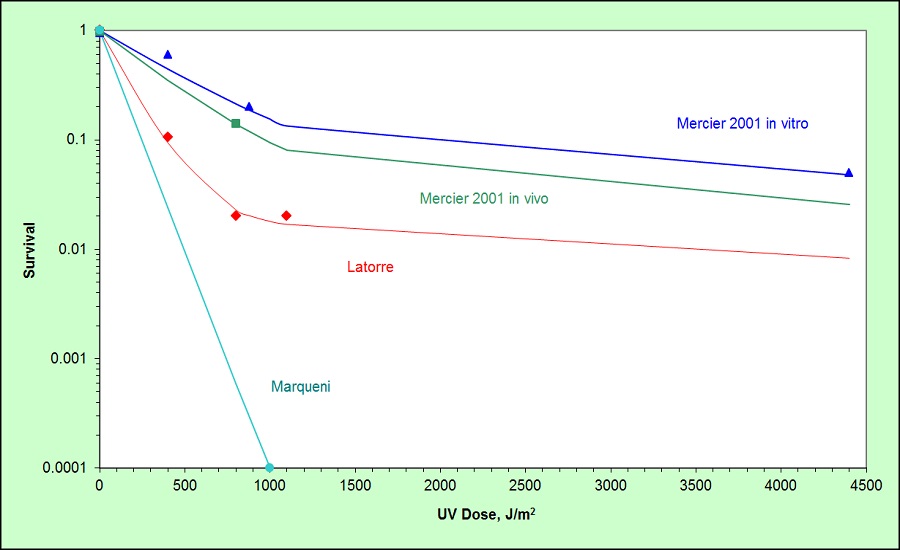 A critical part in the design of indoor cultivation rooms for medical marijuana is the control of airborne fungal spores, and although most existing facilities are poorly suited to prevent the ingress of fungal spores, they can usually be retrofitted with air filters, fans, and UV systems to render them relatively free of spores. It is important, however, that the facility be airtight and under positive pressure to maintain the high levels of cleanliness necessary to avoid outbreaks of mold. And ideally, every cultivation center should have a pressurized anteroom in which worker access will not cause spores to enter from the outdoors. Operating protocols and regular decontamination are necessary to ensure high levels of cleanliness and disinfection.

“Legalization of cannabis has made entrepreneurs more deliberate in the way they design their cultivation facilities,” explains Guckian. “Cultivators are building facilities on a much grander scale, with long-term performance in mind, and are increasingly investing in technologies that will maximize their total yields.”

Guckian’s Accelerated Growth (AG) systems are designed to address these rising demands by regulating temperature, humidity, and vapor pressure differentials to meet the plants’ needs during each step of development.

“Our AG systems modulate to maintain precise temperature and humidity no matter what the load in the space is and, in so doing, provide an environment for plants to flourish,” says Guckian. 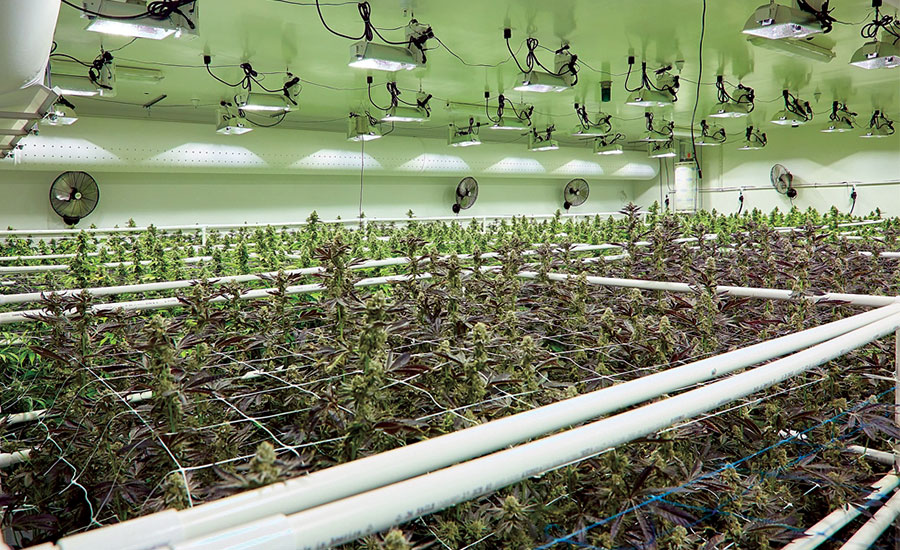 FIGURE 4. Inside this California cultivation facility, ultraviolet germicidal irradiation (UV-C) is used in conjunction with an environmental control system to prevent molds and powdery mildew from forming and ruining the crop.

One standard, built-in feature in all the AG systems is UV-C germicidal irradiation from Santa Clarita, CA-based UV Resources. The 253.7 nm C-band wavelength inactivates virtually all microorganisms that form on HVACR cooling coils. Left unchecked, these microbes might cause molds and powdery mildew to form, ruining entire crops.

“Placing UV-C lamps directly over the cooling coils is crucial to our ability to maintain a healthy, successful facility,” states Guckian. “An added benefit is the disinfected condensate from the cooling coil that can be recycled for use elsewhere in the facility.”

Alternatives to UV-C include mechanical cleanings, which are often cumbersome and difficult in a crowded facility, or the use of pesticides, which are increasingly avoided by growers due to the hazard they pose to many medical marijuana patients. According to Guckian, UV-C provides the simplest, most efficient means of protecting a cannabis crop from mold.

He points to one cultivation facility based in Desert Hot Springs, CA as an example. The 40,000-sq-ft facility had previously been using stand-alone dehumidifiers, coupled with air conditioners, to control its growing environment. Not only was this existing setup unable to effectively modulate and maintain an ideal growing environment, but the absence of UV-C disinfection meant that mold was always a looming threat.

“Installation is incredibly simple,” explains Guckian. “Units are mounted on the floor outside the light room. A small hole is cut in the wall for the return air, and the supply air is released into a fabric duct system.”

“It’s a relatively inexpensive protection for an incredibly expensive crop,” says Guckian. “You shouldn’t even build a facility without it. It’s not even a question.”

Dr. Wladyslaw Kowalski is a consultant to the grow lighting and UV lighting industry and may be reached at 347-270-7943 or drkowalski@petairapy.com.

The president and co-founder of UV Resources, a provider of UV solutions and replacement lamps for HVAC systems, Daniel Jones is an ASHRAE Member and a corresponding member of the ASHRAE Technical Committee 2.9 and ASHRAE SPC-185.2, devoted to Ultraviolet Air and Surface Treatment. He may be reached at dan.jones@uvresources.com.