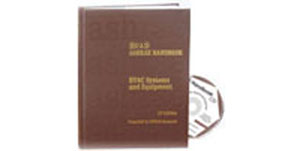 The 2012 ASHRAE Handbook – HVAC Systems and Equipment discusses systems and the equipment that comprises them, including features and differences. It is designed to help system designers and building operators select and use equipment. It contains 52 chapters.

Chapter 18, Variable-Refrigerant-Flow (VRF) Systems, describes these systems, their components and applicable standards in detail, and includes a system design example and important guidance on costs, controls and safety. In previous volumes, variable refrigerant flow was covered in the unitary products section.

“This new chapter covers the A to Z of variable refrigerant flow – from application of VRF to understanding how VRF works and from analyzing a building load in terms of VRF to zoning with VRF,” Paul Doppel, chair of ASHRAE’s technical committee on variable refrigerant flow that wrote the chapter, said. “The chapter offers an excellent overview of VRF technology, including discussion about 2-pipe and 3-pipe system performance during heating operations.”

The chapter also includes a section that lays out a process for designing with VRF including a load analysis, as well as discussions regarding system expansion and designing systems to meet ASHRAE standard requirements.

“Since VRF systems can connect more than 100 percent nominal capacity of indoor units (up to 150 percent in some cases), the chapter also addresses shows how VRF can be used to satisfy changing building conditions with smaller capacity systems by using building diversity and multiple indoor units,” Doppel said.

Other highlights in the 2012 volume:

•     Chapter 21, Fans, has added descriptions of types of fans and their applications; many upgraded figures; vibration categories, grades and limits; and a complete rewrite and update for the controls section.