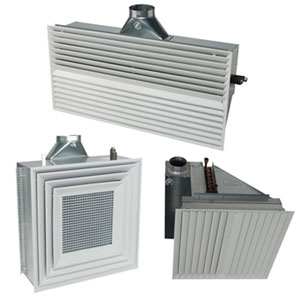 Carrier hasintroduced a new  36IB induction beam system, designed to provide increased energy performance. The efficient design of the 36IB units enables increased heating and cooling capacities. It also requires smaller volumes of ducted air, enabling fan power reductions for the central air-handling equipment, which is only needed for building ventilation and not for heating and cooling. Carrier is a part of UTC Climate, Controls & Security, a unit of United Technologies Corp.

“Induction beam technology was invented by Dr. Willis Carrier in the early 1930s and has been used in Northern Europe’s active chilled beams for decades. However, European chilled beams were designed for sensible cooling only and require precise building and equipment controls to avoid condensation,” said Christie Carlson, product manager, commercial systems, Carrier. “Carrier has simplified the system design and made it more energy-efficient, by adapting the 36IB induction beam units to provide sensible and latent cooling with a drain pan. This allows installation in applications where chilled beams were not previously considered a good fit, and also allows the induction beams to be used with low-chilled water temperatures, removing the need for condensation sensors and complicated water temperature reset controls while increasing cooling capacity.”

In addition, electrical power to the unit is not required since the induction beam uses the velocity pressure differential created by air traveling through the induction nozzles in the beam to provide space conditioning, ventilation and room air circulation. As a result, building electrical loads are reduced, improving the energy efficiency of the building, which may assist in earning Energy & Atmosphere credits under LEED®. Carrier offers LEED certification support for the 36IB induction beam system through the use of Carrier’s Hourly Analysis Program (HAP), a whole building energy simulation that contributes towards satisfying Energy & Atmosphere Prerequisite 2: Minimum Energy Performance under LEED. The 36IB induction beams can also be easily configured using Carrier’s Induction Terminal Builder software, which generates performance reports, guide specifications, unit schedules, and certified drawings.

“At Carrier, we continually strive to improve heating, ventilation and air-conditioning(HVAC) technology, and the 36IB induction beam system is a terrific example of that commitment,” said Greg Alcorn, vice president, sales and marketing, commercial systems, Carrier. “The 36IB induction beams provide more heating and cooling capacity, better energy efficiency, and less reliance on electrical power than previously possible, while eliminating the risk of condensation in the space. With the introduction of the 36IB units, building owners and engineers now have additional HVAC options to assist with overall building efficiency and LEED certification.”