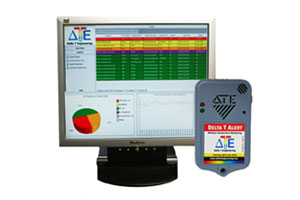 Designed and patented by Fred Baier, president and founder of Delta T Engineering, LLC, the Delta T Alert collects temperature data and sends it, via wireless communication, to a desktop or other computer, allowing a building manager or engineer to monitor numerous points of the electrical system from a single online location. Readouts and reports can be generated daily, enableing building engineers to address potential problems before they cause system failure.

The monitoring device has functioned successfully in buildings in NYC and other locations starting in 2009. Prior to the development of Delta T, most building and plant engineers monitored electrical systems through infrared testing, usually performed annually, and perhaps supplemented this information through periodic checks by maintenance staff. In between infrared testing or maintenance checks, the state of the enclosed electrical equipment often remained a mystery. Moreove, these methods can be costly and hazards in themselves.

For example, maintenance on dry-type transformers is sometimes overlooked because of the danger of transformer cover removal.

Delta T Alert bridges the gap between conventional and effective but relatively infrequewnt methods, such as infrared tests, by providing information daily. Appropriate applications for the Delta T include disconnects, VFDs,, and main switchgreat room, the core of a facility’s electrical system.

Installation is simple. It requires only the drilling of a 15/32 in. hole in the cover of an electrical enclosure. The Delta T then attaches magnetically to the cover. The hole allows the device’s interior sensor, 7/8 in. long, to penetrate the enclosure to measure internal temperatures. (Both the size of the hole and length of the interior sensor conform to protection classification NEPA IP20, which prevents hand of finger access to hazardous internal parts.) The rest of the Delta T device, a small rectangular unit that include LED lights and an additional sensor, remains outside the enclosure to measure ambient room temperature. When the internal and external temperatures differ significantly, a signal is sent via wireless communication to a desktop, laptop, or other computer. An “elevated alarm,” signal indicates that close watching, and appropriate alterations in the system, may be needed. If a “critical alarm” signal appears, the building engineer knows that immediate attention is required.

Delta T can also reveal fluctuations in electrical load that may occur seasonally, daily, or even at different times of the day. Multiple readings per day increase the user’s ability to detect intermittent overheating conditions and allow for timely repair prior to failure.