Figure 1. A typical curve for a vaneaxial fan, commonly referred to as a static pressure curve.

Various axial and centrifugal fan performance curves will be illustrated throughout this article, with no attempt made to rationalize any particular selection.

Figure 2. A typical curve for a backward inclined centrifugal fan.

Figure 3. An example of a static pressure curve, vaneaxial.

The fan “pressure-volume” curve is generated by connecting the fan to a laboratory test chamber. By following very specific test procedures as outlined in the Air Movement and Control Association (AMCA) Standard 210, data points are collected and plotted graphically for a constant rpm, from a “no flow” block off condition to a “full flow” or wide condition. Figure 1 represents such a curve that is typical for a vaneaxial fan, and is commonly referred to as a “static pressure” curve.

Point A represents the point of zero airflow on the static pressure curve. It is frequently referred to as “block off,” “shut off,” “no flow,” and “static no delivery.”

Figure 4. An example of a static pressure/hp curve, vaneaxial.

Point B depicts the stall region of the static pressure curve. Operation in this area is discouraged because of erratic airflow that generates excessive noise and vibration. For a more in-depth look into this phenomenon refer to ED-600, “Surge, Stall & Instabilities in Fans.” Point C depicts what is referred to as the peak of the static pressure curve, and point D is the point of maximum airflow. Point D is also referred to as “free delivery,” “free air,” “wide open performance,” and “wide open volume.” Curve segment CD is often referred to as the right side of the fan curve. This is the stable portion of the fan curve and is where the fan is selected to operate. It then follows that curve segment AC is the left side of the fan curve and is considered to be the unstable portion of the curve. Figure 1 is a vaneaxial curve with a pronounced dip (stall region) that is also a typical curve shape for high angle propeller fans and forward curve centrifugal fans. In contrast, compare this curve to Figure 2, which represents a typical curve for a backward inclined centrifugal fan. This curve shape is also representative of radial blade centrifugal fans.

Note the lack of a pronounced dip on this curve. Nevertheless, the area left of peak is also a stall region and selections in this area should be avoided. The fan static pressure curve is the basis for all airflow and pressure calculations. For a given SP on the static pressure curve, there is a corresponding cfm at a given rpm (Figure 3). Simply locate some unit of pressure on the left hand SP scale and project a horizontal line to the point of intersection on the static pressure curve. From the point of intersection, project a vertical line to the bottom cfm scale to establish the corresponding airflow at that particular speed. In this example, a SP of three units results in a cfm of 4.71 units. 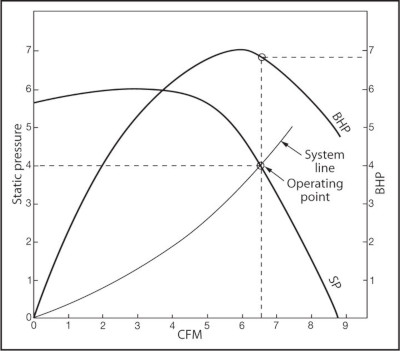 Figure 6. An example of a fan/system operating point, backward-inclined centrifugal.

Having established a SP and an airflow (cfm), an operating brake horsepower (bhp) can be established (Figure 4).

By adding the bhp curve to the static pressure curve from Figure 3 we complete the fan performance curve. To determine bhp simply extend vertically the cfm point established in Figure 3 until it intersects the bhp curve. Draw a horizontal line from this point of intersection to the right to the bhp scale to establish a bhp of 7.27 units, which corresponds to the previously established performance of 4.71 cfm units at 3.0 SP units. 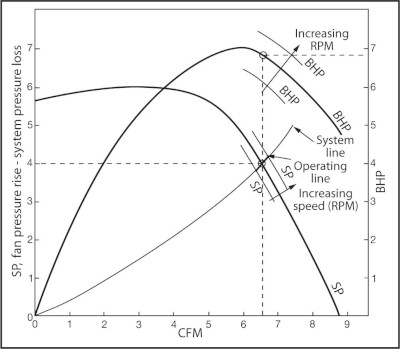 Similarly, we can add the bhp curve to the static pressure curve of the backward inclined centrifugal fan from Figure 2 to complete that fan performance curve (Figure 5).

Even though the performance curves for the vaneaxial fan and the centrifugal fan have completely different shapes, the curves are read in the same way. Locate some unit of pressure on the left hand SP scale (4 units) and project a horizontal line to the point of intersection with the SP curve. Projecting downward from this point of intersection to the cfm scale, we establish an airflow of 6.55 units. Now project vertically upward to intersect the bhp curve. Project a horizontal line from this point to the bhp scale and read a bhp of 6.86 units. 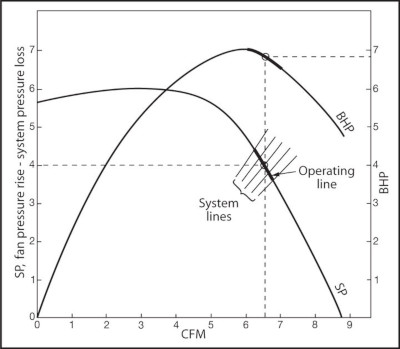 The operating point (point of operation or design point) is defined as the fan pressure rise (SP)/volumetric flow rate (cfm) condition where the fan and system are in a stable equilibrium. This corresponds to the condition at which the fan SP/cfm characteristic intersects the system pressure loss/flow rate characteristics.

Knowing that the fan must operate somewhere along the system curve, and knowing that it is possible to predict the fan performance at other speeds by applying the following fan laws:

We can now graphically present an “operating line” between various fan speeds using the fan/system operating point data from Figure 6. This results in new SP curves and bhp curves as shown in Figure 7.

These speed changes represent an example of fan control that can be accomplished through drive changes or a variable speed motor.

Another way to present an “operating line” is to add a damper, making the system the variable characteristic. By modulating the damper blades, new system lines are created, resulting in an operating line along the fan curve. This can be seen graphically in Figure 8. 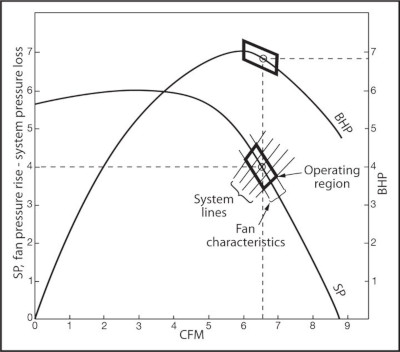