Corrosion: A Clear and Present Danger

Data center free-cooling system components, such as air-to-water heat exchangers, are subject to the possibility of corrosion, which can lead to significant efficiency and availability issues.

Free cooling has become firmly established as a highly effective way to reduce the energy consumed by chillers through the use of outside air or water. Free-cooling systems can save data center owners and operators massive amounts of electricity and money, significantly improving a facility’s overall energy efficiency. However, for a free-cooling system to operate as effectively as possible, its air-to-water heat exchangers must be maintained to a high standard.

Air-cooled heat exchangers, such as condensers, dry coolers, or those used in free-cooling systems, are often exposed to elements, such as pollution and salty air, which can accelerate corrosion. Data center operators should, therefore, address the issue of preventive corrosion protection as soon as possible after installation. Since all cooling and refrigeration components are exposed to certain corrosive processes, depending on specific environmental factors, it is only a matter of time before measurable material changes occur in individual components.

Put simply, the right choice of corrosion protection can help to significantly extend the operational life of a cooling system. Understanding the various corrosion protection measures for air-cooled exchangers, as well as the corrosive processes that take place in a chilled water circuit, serve as the basis for a proactive maintenance strategy. If a heat exchanger leaks due to corrosive processes, it can lead to a failure of the installation, so corrosion, therefore, has a significant, as well as negative, impact on efficiency and availability. 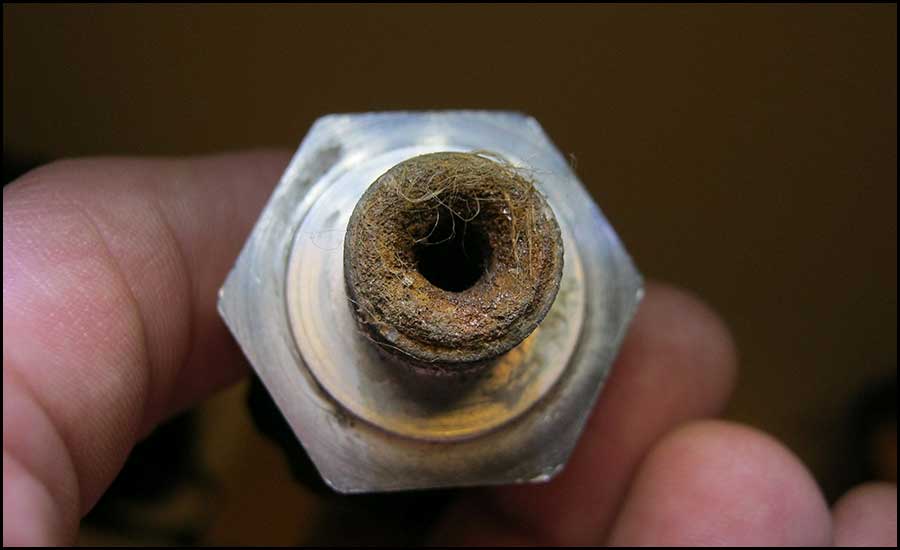 Corrosion is defined as the reaction of a metal with its environment — a gradual process which, over time, can lead to impairment of the function of a component or even a complete system. Corrosive processes are triggered by chemical or electrochemical substances in the ambient air or by contact between two different metals. Under particularly unfavorable environmental conditions, air-to-water heat exchangers can be damaged to such an extent that they become deformed or lead to individual fins breaking. Damage to the material structure is usually irreversible and requires expensive repairs or even replacement.

Oxygen corrosion is caused by a metal reacting with oxygen to form oxides. In the case of copper and aluminium, the resulting natural oxide layer protects the interior of the metal, so oxidation can even be considered beneficial. Conversely, compounds, such as nitrogen and sulfur oxides as well as ammonia, chlorides, and carbon monoxide, react with copper and aluminium to form acids that can cause microscopic indentations. Known as pitting, this can cause severe corrosion damage within just a few months.

As soon as more than one metal is used in components of a cooling system, especially those exposed to air, galvanic corrosion can occur. In conjunction with an electrolyte, such as salt water, ions of a less noble metal begin to flow toward a more noble metal. Copper and aluminium components are particularly affected by this, as are metal combinations in environments with high saltwater contamination. In particular, galvanic corrosion can cause significant damage to aluminium microchannel air-to-water heat exchangers connected via copper tubes. Fracture and blockage of the fine microchannels then leads to partial pressure losses or even refrigerant leakage. 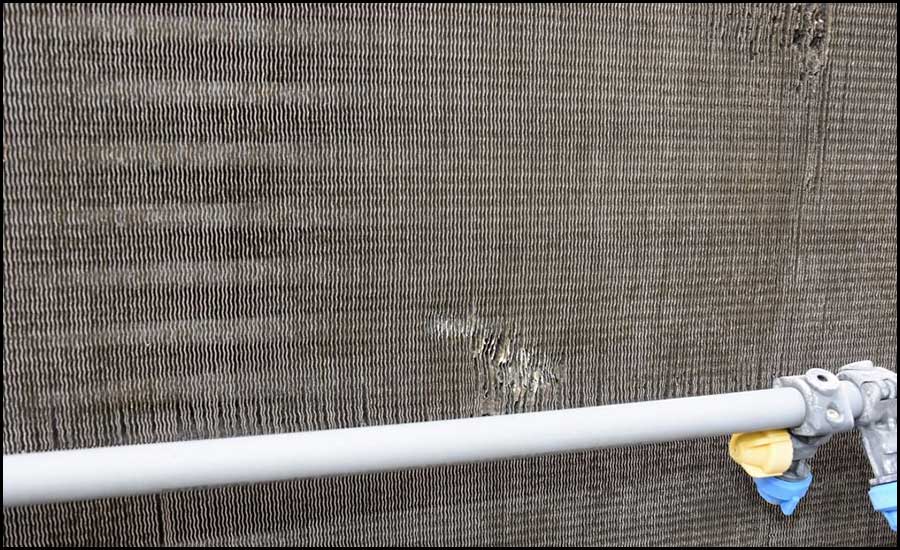 There are now various options for protecting air-to-water heat exchangers against corrosion. Thicker aluminium fins protect against premature breakage; however, during plant operation, the extra fin width blocks airflow, thereby reducing efficiency. A better option is the use of Cu/Cu coil fins, as they eliminate the effects of galvanic corrosion because both the tubes and fins are made entirely of copper. Cu/Cu coil fins are relatively expensive, though, and offer only a limited advantage compared to aluminium fins. Since they primarily protect against galvanic corrosion, they are mainly considered for installations in the immediate vicinity of the sea.

In addition to structural measures, modern coating techniques can also help. Spray coating provides protection against all types of corrosion and is relatively inexpensive compared to other types of coating. However, a well-known problem concerning spray coatings is that they can leave gaps in the top coat, and while they are recommended for conventional installation conditions, they are less suitable for locations with very high ambient pollution from exhaust gases, acid rain, or salty air.

Unlike spray coating, cathodic dip coating offers high layer uniformity. In this process, an air-cooled or air-exposed heat exchanger is electrically charged and then completely immersed in a chemical bath. The coating adheres uniformly to all surfaces with no gaps in protection, and this also achieves the thinnest protective layer of all coating processes, with little effect on thermal conductivity. Under test conditions, spray coating with aluminium pigmented polyurethane (blygold) offers the most effective protection overall; however, the risk of selective protection gaps remains. Ultimately, although it has a lower salt spray value, cathodic dip coating is a more reliable technique.

Most water circuits use a mix of materials that have different chemical properties. Monitoring water parameters in a chilled water circuit is therefore required in addition to a site-specific assessment of individual corrosion risks. Paying attention to the proper water quality right from the initial filling stage not only improves system service life but also ensures higher plant efficiency.

In data centers, there are two main water-cooled system designs — precision air conditioners with an integrated direct evaporation (DX) refrigeration circuit or chilled water (CW) indoor units connected to a central chiller via air-to-water heat exchangers. Both variants require an oxygen-tight water circuit, free of foreign particles and sedimenting substances. In the closed circuits found in chilled water systems, corrosion damage can occur within a couple of years. This is a problem not only because of possible pipe damage and leaks but also because flaked off corrosion particles can clog pumps, filters, or capillaries.

Oxygen corrosion is caused by dissolved oxygen in water. In closed systems, it decomposes over time, but a residual oxygen content can generally be assumed. If oxygen, water, and a metal react with each other, oxidation or corrosion of the metal occurs. In the case of acid corrosion, metals are attacked by acid due to a pH value that is too low (< 5pH), and this begins a decomposition process. The reaction can take place without oxygen and proceeds more aggressively in a more acidic environment.

For electrochemical, or galvanic, corrosion to occur, two materials must be in contact. The less noble metal gives up electrons and is oxidized, with steady decomposition of the material. Meanwhile, with bacterial corrosion, bacteria extract electrons from the metal, whereupon the material oxidizes. The waste product of the bacteria is sulfur oxide, which causes a strong odor in the surrounding medium.

Oxygen content also has a massive impact on corrosion in a chilled water circuit. If there is high oxygen content in the water, an enhanced risk of corrosion can also be assumed, but in closed systems, this is rapidly degraded. To prevent oxygen corrosion, it is possible to chemically bind oxygen, yet other factors also contribute to the corrosiveness of circulating water, including pH value, water hardness, and conductivity. 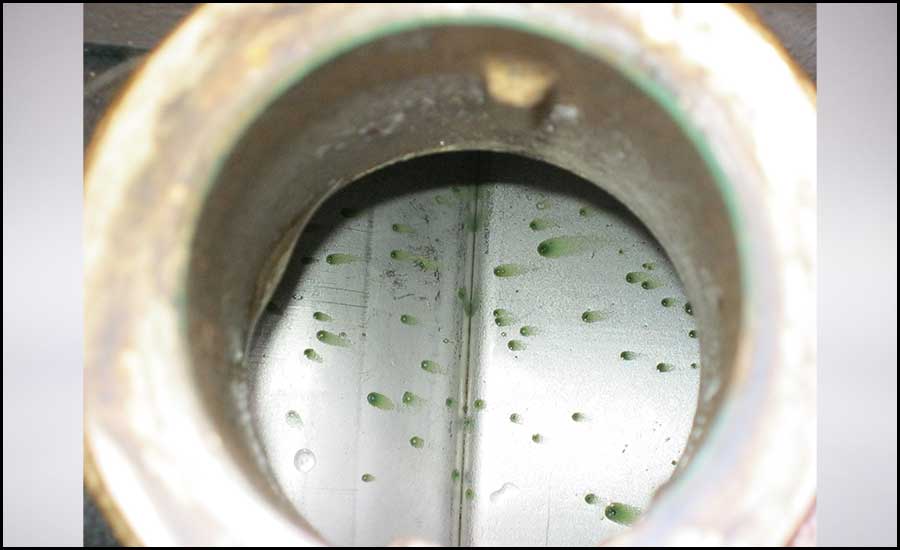 FIGURE 4. Formation of a biofilm due to bacterial corrosion on a pump, due to the use of deionized water without additives.

A pH value is considered a measure of the strength of an acidic or basic aqueous solution. A too high or low pH value should be avoided because different materials have different pH ranges in which they can form a protective oxide layer. If this range in an installed material is undercut or exceeded, the risk of corrosion increases significantly, leading to acid corrosion.

After a system has been filled, a large proportion of dissolved carbonic acid is still contained in the circulating water. This proportion gradually escapes as carbon dioxide and, due to the lack of carbonic acid, the pH value increases. An exact adjustment of a pH value is, therefore, almost impossible. If there is a mix of materials in the pipe network, the range of values in which the pH value does not have a corrosive effect on any components is reduced. 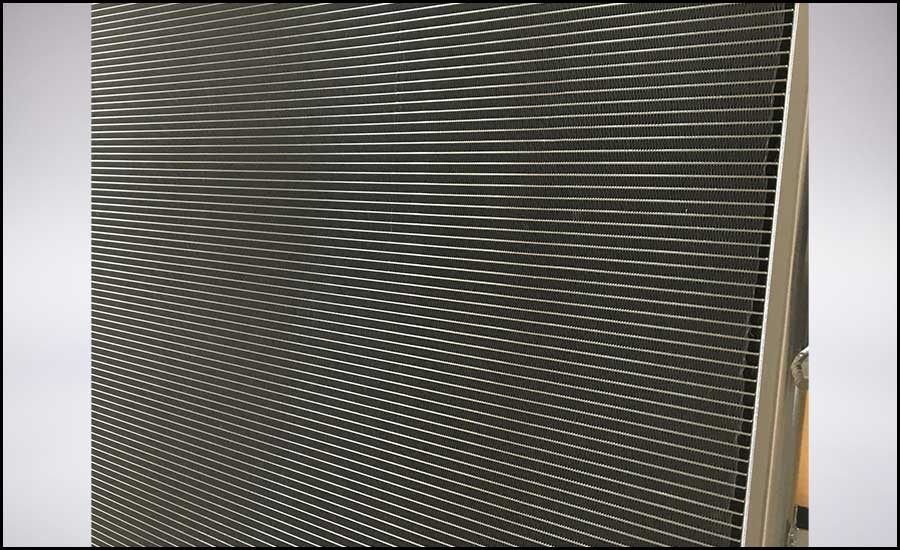 Water hardness is defined by the content of alkaline earth metal ions. On the one hand, there is carbonate hardness, which is also called temporary hardness, and, on the other, there is permanent hardness. Nonpermanent hydrogen carbonates, which are dissolved in water when a circuit is filled, precipitate into carbon dioxide, and carbonates located at the warm sections of a circuit and can cause significant efficiency losses.

The conductivity of water is determined by the amount of anions and cations dissolved in the water, including minerals, such as magnesium, calcium, and hydrogen carbonate, as well as salts and dissolved metal ions. The more particles present, the higher the conductivity and, thus, the susceptibility to electrolytic corrosion. In chilled water systems, lime always precipitates at the warmest point with the lowest flow velocity, and, in most cases, this is the air-to-water heat exchanger. As such, there is a risk that it will become clogged, which can also lead to stress cracks.

When checking water conditions, special attention should be paid to salts. Dissolved salts in particular are critical for the chilled water circuit, as they are very reactive and cause precipitation and corrosion. Chloride is the salt of hydrochloric acid and is the most stable parameter in the loop system. Primarily, it serves as a chemical catalyst that also accelerates corrosion processes.

In addition to mandatory leak and function tests, a comprehensive cooling system maintenance strategy should include preventive corrosion protection for air-cooled or air-exposed heat exchangers. Even seemingly simple measures can help to permanently improve protection, so it is advisable to remove coarse dirt, such as leaves, pollen, and dust from heat exchanger surfaces at regular intervals. The coating must then be thoroughly checked for contamination and damage. Finally, when using a cleaning agent, make sure it is compatible with the coating — information about this can be provided by the system manufacturer.

Tobias Wolf is the deputy head of product management at Stulz GmbH.  He has a degree in mechanical engineering and a double master’s degree in energy technologies (ENTECH). Wolf joined Stulz in 2017 with a focus on chillers and precision air conditioners for data centers, telecommunications, and industry. With 14 years of experience in refrigeration, air conditioning, and environmental technology, as well as energy efficiency and building services engineering, he is a knowledgeable expert in this field.