Any time you turn on a light at home or in the office, you are expending energy. But what if flipping the light switch meant producing energy too?

We usually think of solar, or photovoltaic (PV), cells fixed to roofs, converting sunlight into electricity, but bringing that technology indoors could further boost the energy efficiency of buildings and energize swaths of wireless smart technologies, such as smoke alarms, cameras and temperature sensors, also called Internet of Things (IoT) devices. Now, a study from the National Institute of Standards and Technology (NIST) suggests that a straightforward approach for capturing light indoors may be within reach. NIST researchers tested the indoor charging ability of small modular PV devices made of different materials and then hooked up the lowest efficiency module — composed of silicon — to a wireless temperature sensor.

The team’s results, published in the journal Energy Science & Engineering, demonstrate that the silicon module, absorbing only light from an LED, supplied more power than the sensor consumed in operation. This outcome suggests that the device could run continuously while lights remain on, which would do away with the need for someone to manually exchange or recharge the battery.

“People in the field have assumed it’s possible to power IoT devices with PV modules in the long term, but we haven’t really seen the data to support that before now, so this is kind of a first step to say that we can pull it off,” said Andrew Shore, a NIST mechanical engineer and lead author of the study.

Most buildings are lit by a mix of both the sun and artificial light sources during the day. At dusk, the latter could continue to supply energy to devices. However, light from common indoor sources, such as LEDs, spans a narrower spectrum of light than the wider bands emitted by the sun, and some solar cell materials are better at capturing these wavelengths than others. 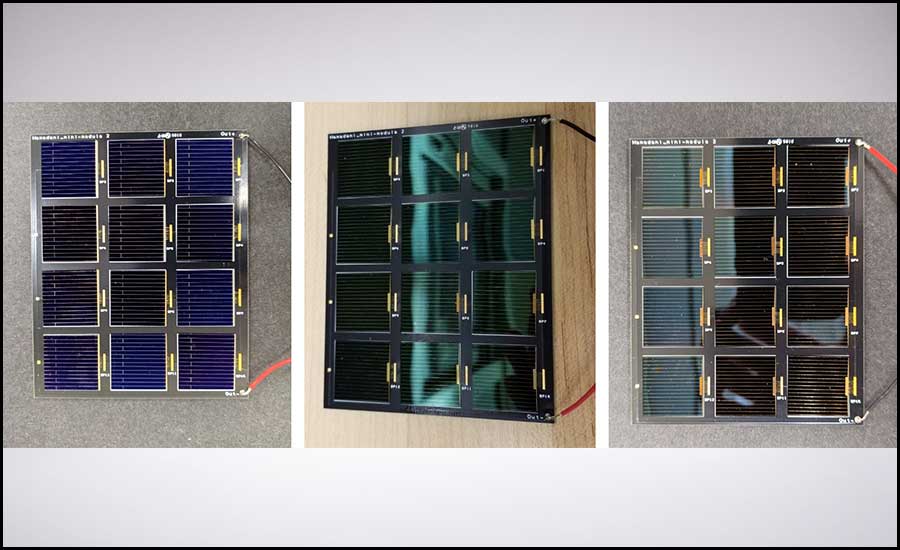 NIST researchers tested miniature solar modules made of three different materials under artificial light. The modules (from left to right) were made of silicon, gallium arsenide and gallium indium phosphide.

To find out exactly how a few different materials would stack up, Shore and his colleagues tested PV mini modules made of gallium indium phosphide (GaInP), gallium arsenide (GaAs) — two materials geared toward white LED light  — and silicon, a less efficient but more affordable and commonplace material.

The researchers placed the centimeters-wide modules underneath a white LED, housed inside an opaque black box to block out external light sources. The LED produced light at a fixed intensity of 1,000 lux, comparable to light levels in a well-lit room, for the duration of the experiments. For the silicon and GaAs PV modules, soaking in indoor light proved less efficient than sunshine, but the GaInP module performed far better under the LED than sunlight. Both the GaInP and GaAs modules significantly outpaced silicon indoors, converting 23.1% and 14.1% of the LED light into electrical power, respectively, compared with silicon’s 9.3% power conversion efficiency.

Coming as no surprise to the researchers, the rankings were the same for a charging test in which they timed how long it took the modules to fill a half-charged 4.18-volt battery, with silicon coming in last by a margin of more than a day and a half.

The team was interested in learning if the silicon module, despite its poor performance relative to its top-shelf competitors, could generate enough power to run a low-demand IoT device, Shore said.

Their IoT device of choice for the next experiment was a temperature sensor that they hooked up to the silicon PV module, placed once more under an LED. Upon turning the sensor on, the researchers found it was able to feed temperature readings wirelessly to a computer nearby, powered by the silicon module alone. After two hours, they switched off the light in the black box and the sensor continued to run, its battery depleting at half the rate it took to charge.

“Even with a less efficient mini module, we found that we could still supply more power than the wireless sensor consumed,” Shore said.

The researchers’ findings suggest that an already ubiquitous material in outdoor PV modules could be repurposed for indoor devices with low-capacity batteries. The results are particularly applicable to commercial buildings where lights are on around the clock. But how well would PV-powered devices run in spaces that are only lit intermittently throughout the day or shut off at night? And how much of a factor would ambient light pouring in from outside be? Homes and office spaces aren’t black boxes after all.

The team plans to tackle both questions, first by setting up light-measuring devices in NIST’s Net-Zero Energy Residential Test Facility to gain an understanding of what light is available throughout the day in an average residence, Shore said. Then they’ll replicate the lighting conditions of the net-zero house in the lab to find out how PV-powered IoT devices perform in a residential scenario.

Feeding their data into computer models will also be important for predicting how much power PV modules would produce indoors given a certain level of light, a key capability for cost-effective implementation of the technology.

“We're turning on our lights all the time, and as we move more toward computerized commercial buildings and homes, PV could be a way to harvest some of the wasted light energy and improve our energy efficiency,” Shore said.

This article first appeared on the National Institute of Standards and Technology’s website. See the original article in its entirety at https://www.nist.gov/news-events/news/2021/08/common-solar-tech-can-power-smart-devices-indoors-nist-study-finds.