During the mid-1990s, Ron Michael, regional manager, Loren Cook Co., was conducting a lunch and learn at a large engineering firm on the East Coast. As talk turned to fan selection and use of Cook’s software program, Michael was interrupted by the head of the firm’s mechanical department.

“Show us how to read a fan curve,” the head of the mechanical department requested.

Being new to the field, Michael assumed every engineer — especially ones at such a large firm — knew how to read a fan curve, the graphical representation of a fan’s performance, specifically noting the relationship between the amount of airflow and the amount of static pressure produced.

“My first thought was he actually wants to see if I know how to read a fan curve,” Michael recalled. “So, I began my presentation in detail, knowing I could not screw this up.”

A few minutes into Michael’s explanation, the head of the mechanical department interrupted again.

“We don’t have that much time, based on our busy schedules, so we use the rule-of-thumb method.”

This involves placing the palm of one’s left hand on a fan-curve graph so that the index finger is aligned with the left vertical (y-) axis, along which static pressure is plotted, and the thumb is aligned with the horizontal (x-) axis, along which air-volume flow rate is plotted (more on this later), the head of the mechanical department explained. Where a vertical line extending upward from the tip of the thumb intersects the flow-versus-pressure curve is the fan’s operating point (again, more on this later) (see Figure 1). 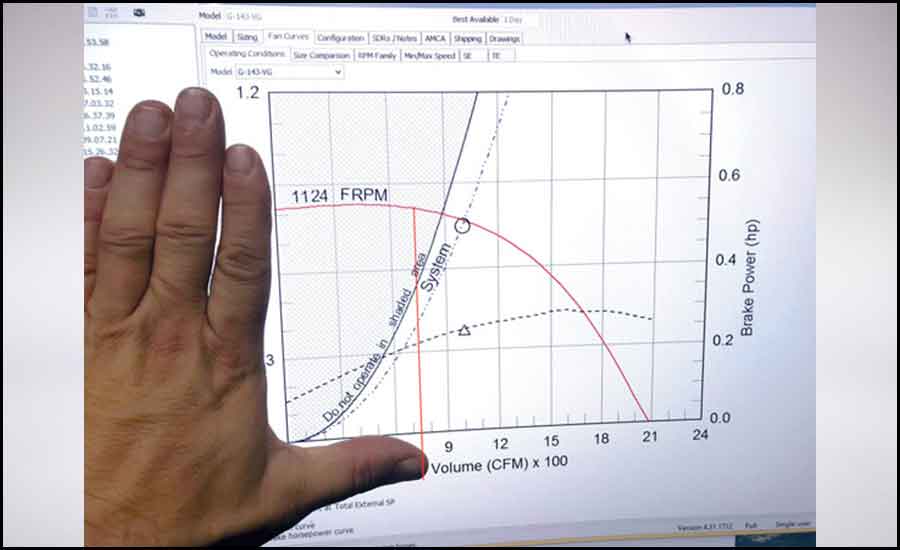 “I didn’t quite know what to say but quickly determined that not many people in the room actually knew how to read a fan curve,” Michael reminisced.

Those people were hardly alone and would not be lacking company today. While, at first glance, a fan curve can appear complicated, it is fairly easy to interpret once one gains an understanding of the conventions and terminology used. Reading a fan curve (correctly) is a skill worth possessing, as it allows those who select and specify fans to understand the performance characteristics and capabilities of different equipment so they may determine the fan that best suits the requirements of an application. For them, this article will help to straighten out fan curves.

While there is no standard method for graphically representing fan-performance data, this article will cover what one is most likely to see.

In the design of a ventilation system, the desired airflow rate and system pressure loss (static pressure or total pressure) often are referred to as the duty point. A fan curve depicts duty point.

As stated earlier, on a fan-curve graph, airflow — typically expressed in cubic feet per minute (cfm), cubic meters per second (m³/s),¹ cubic meters per hour (m³/h), or liters per second (l/s) — is represented along the x-axis, while system pressure loss — typically expressed in inches of water gauge (in. w.g., or in. H2O), Pascals (Pa)¹, or millimeters of water gauge (mm H2O) — is represented along the left, y-axis. 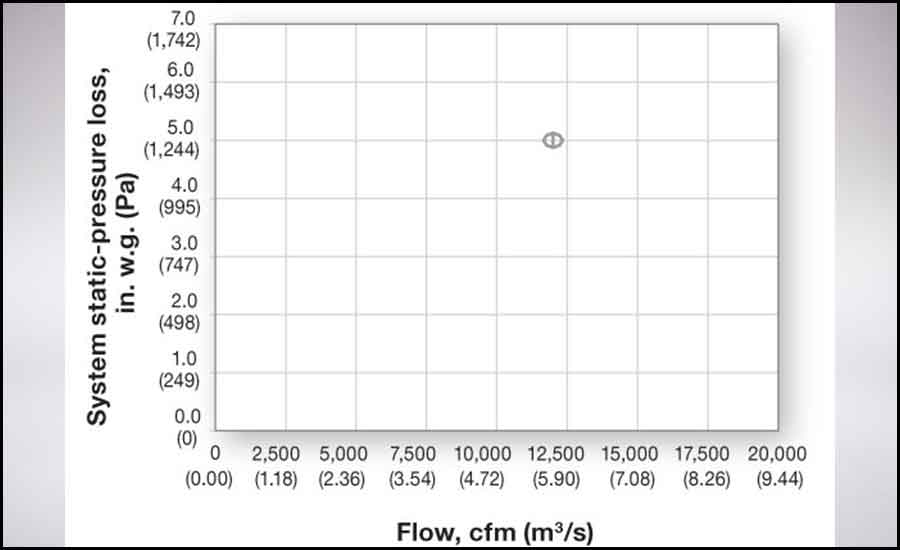 Whether via the internet, on the company's website, or as a program to be installed on a user’s computer, many fan manufacturers offer software capable of quickly identifying a number of possible fan solutions for a given duty point. Typically, possible fan selections are displayed in a table showing model type, size, flow, pressure, speed, required power, efficiency, outlet velocity, and other relevant data.

All of the selections in Table 1 are capable of achieving the duty point in our example. 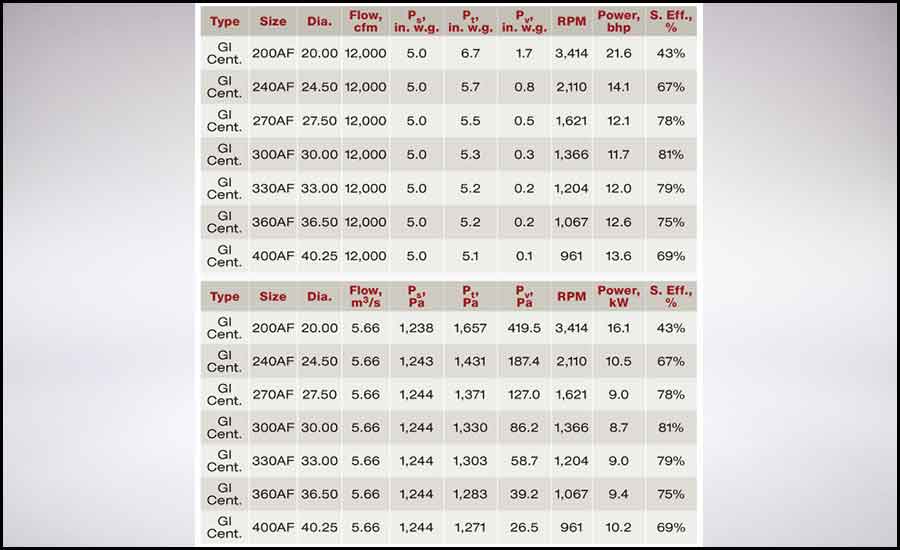 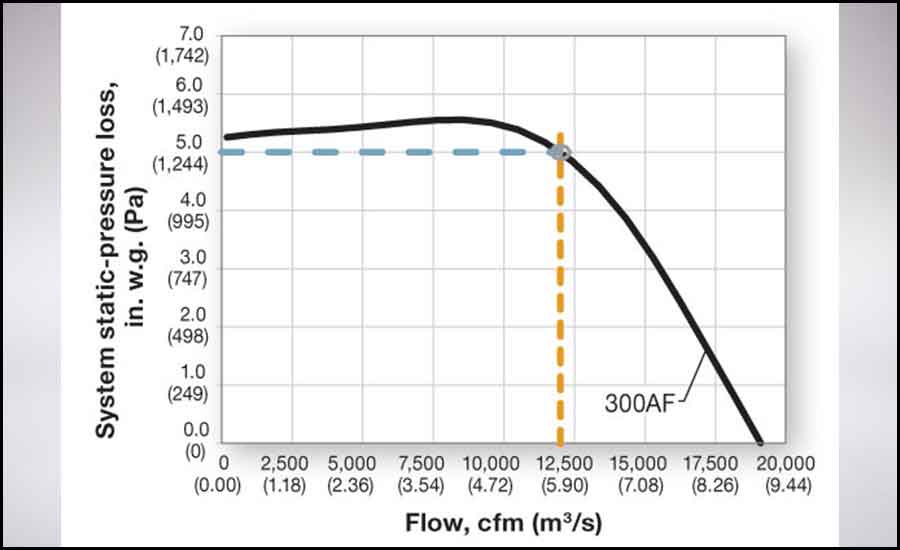 To read the curve, draw or imagine a line extending vertically from the required flow on the x-axis up to and slightly through the curve (the yellow dashed line in Figure 3). From that intersection of line and curve, draw or imagine a line extending horizontally to the y-axis to determine the pressure produced by the fan (the blue dashed line in Figure 3). This should be the required pressure. In Figure 3, the fan flow curve intersects the duty point at the desired flow and pressure, as required.

Typically, the power required by the fan is also displayed. A power curve can be shown on the left or the right axis and should be read at the required flow. In Figure 4, draw or imagine a line extending from 12,000 cfm (5.66 m³/s) on the x-axis straight up to the red power curve. From there, read horizontally to the right to determine the power required by the fan. In this case, the required power is 11.7 bhp (8.7 kW). 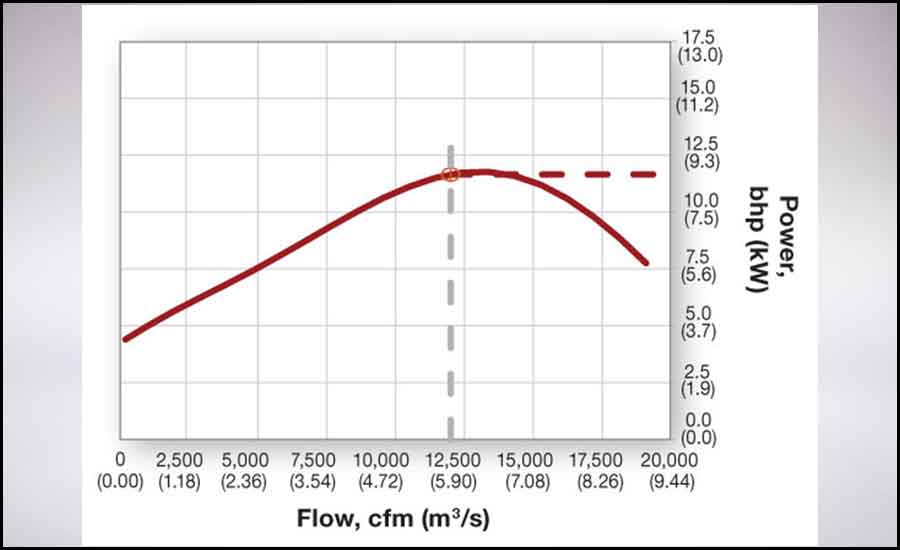 Generally, the power required by a fan increases as flow through the fan increases. With many airfoil and backward-curved or backward-inclined fans, however, power reaches a peak value and then decreases as flow increases.² This type of power curve is known as “non-overloading.” If the driving motor power is greater than the peak power on the curve with allowances for temperature and drives, etc., the fan should not overload in operation.

The power curves of many axial propeller fans and ventilators will show power decreasing as flow increases to the point of free delivery.²

Though flow-versus-power curves can be shown on a separate graph, typically they are superimposed with flow-versus-pressure curves on the same graph, with pressure along the left axis and power along the right (see Figure 5). 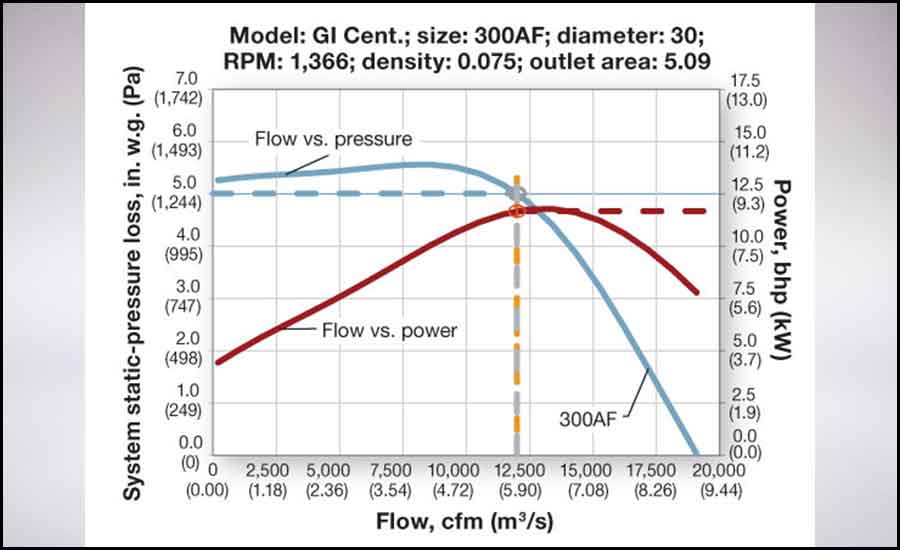 In the case of most industrial exhausters, pressure and combustion blowers, and forward-curved fans, the power curve increases as flow increases to the point of free delivery.² Figure 6 is the fan-curve graph for an industrial exhauster selected for our example duty point. This selection is much less efficient at 14.4 bhp (10.7 kW). The peak power on the power curve is about 20.5 bhp (15.3 kW). The graph includes additional notes regarding how the fan was tested and the performance and power losses that are included. In this case, the test was ducted inlet and ducted outlet. The fan installation should be similar to the test setup to avoid system effects. The power ratings do not include drive losses; V-belt-drive losses will have to be added to the power requirement for the motor. 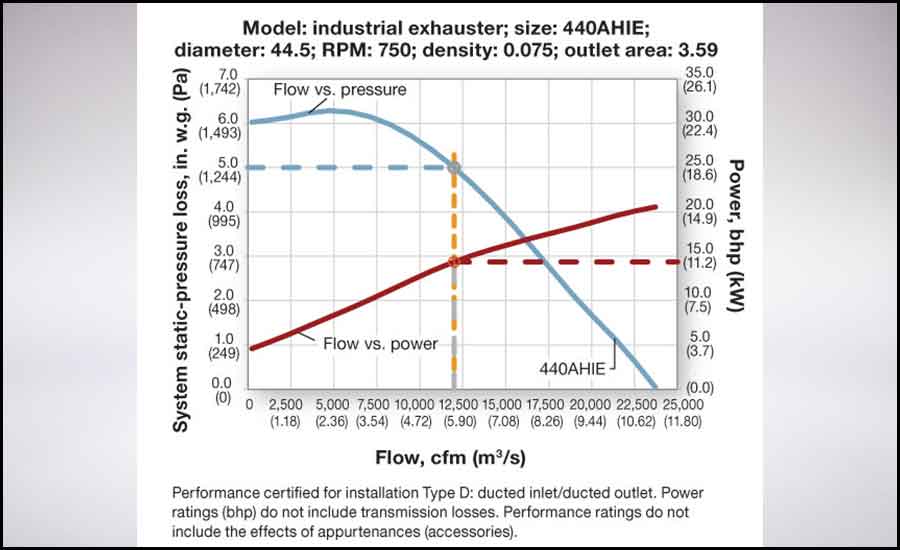 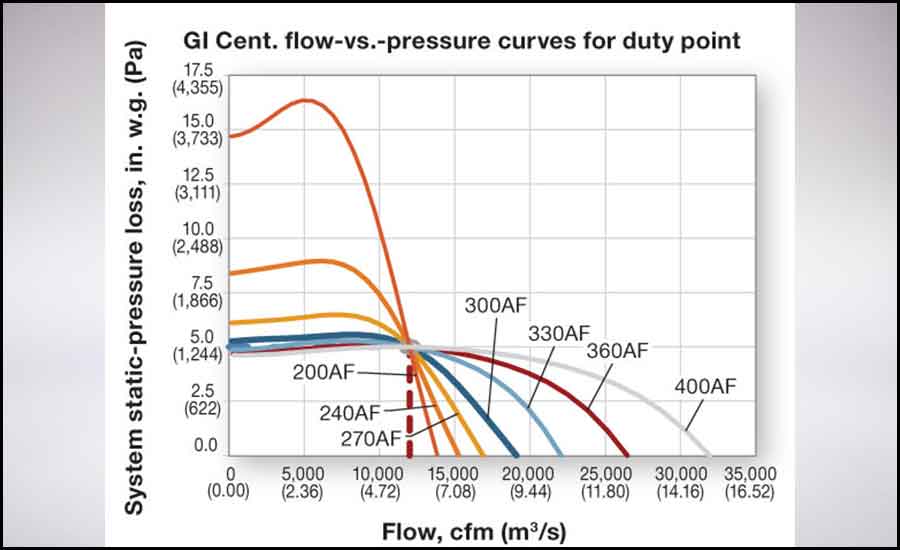 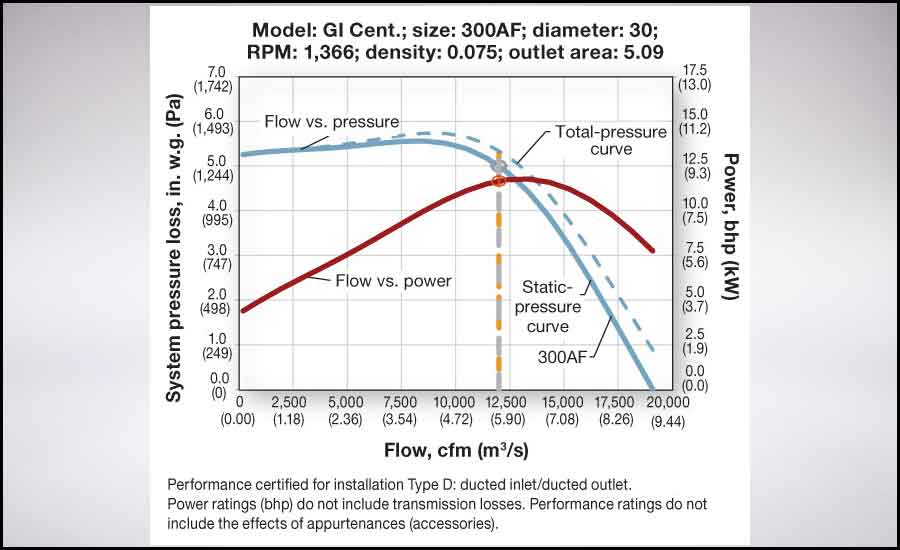 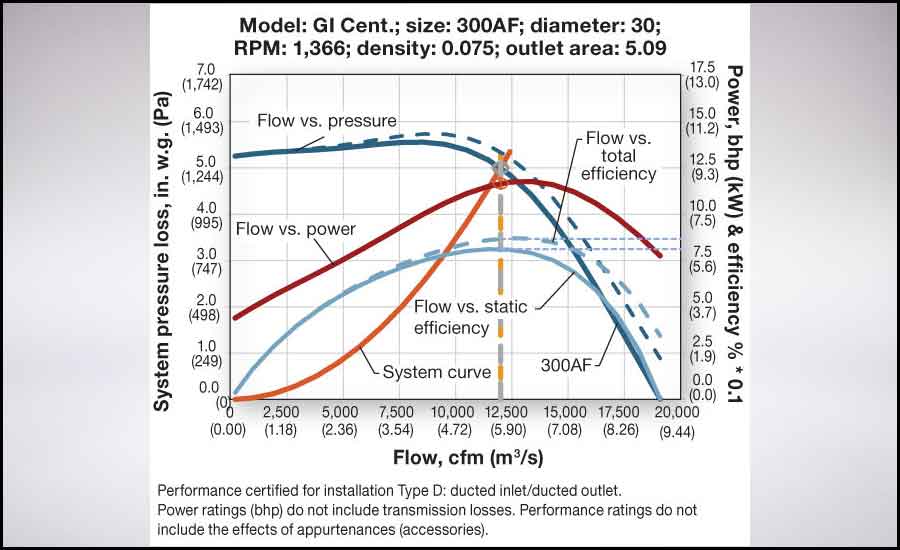 Figure 9 also includes an orange parabola representing system resistance at various flows. Resistance generally varies as the square of flow ratio.² The fan will operate at the intersection of the system curve and the fan curve.⁴

This article covered some of the most commonly encountered fan curves. There are additional curves with multiple speeds, multiple blade angles, and combinations of fan performance data. Curves with fan energy index (FEI) operating bubbles,⁵ motor-sizing limits, inlet-turning-vane data, and other information are derived from the curves shown here. Knowing to start at the required system flow and work up to the pressure, power, efficiency, or system curve is the key to untangling fan curves.

This article originally appeared in the 2020 edition of AMCA inmotion magazine.