In a few short months, U.S. pump manufacturers will be required to comply with new federal energy conservation standards for clean water pumps. Here’s what engineers should know about the regulations as they consider pump selections with efficiency in mind.

What are the energy conservation standards for pumps?

The U.S. Department of Energy (DOE) has set forth a new standard for certain clean water commercial and industrial pumps, requiring them to achieve a minimum energy rating. These standards apply to equipment manufactured in, or imported into, the U.S. beginning in January 2020.

What prompted the DOE to focus on pump efficiency?

With an estimated 20% or more of the electricity in the U.S. consumed by commercial and industrial water pumps, more efficient pumps will reduce the overall demand for energy and thereby improve the security and reliability of the nation’s energy system.

The new standard was developed under the auspices of the U.S. Energy Policy and Conservation Act of 1975 (EPCA), which details a variety of provisions designed to improve energy efficiency. Part C of Title III establishes the "Energy Conservation Program for Certain Industrial Equipment." The covered equipment includes electric motors, fans, compressors, and pumps. This provision was not acted upon for pumps until 2011, when the DOE announced its intent to develop Pump Energy Conservation Standards.

The standards are modeled after similar pump efficiency regulations in the European Union. The DOE has estimated 25% of the poorest performing pumps will be eliminated based on the new efficiency benchmarks.

When do the standards take effect?

The Energy Conservation Standards for Pumps go into effect on Jan. 27, 2020. Pump manufacturers were given four years to comply.

What are the scope limitations of the standard?

What pumps are outside of the DOE scope?

Double suction pumps, circulators, and pool pumps, along with the following:

The DOE has the responsibility to enforce the rule. It relies on interested parties to report noncompliance. The DOE has the option to request samples from manufacturers, test at a test lab of its choice, and levy fines for violations.

How will pump efficiency be rated?

To rate the energy performance of pumps, the DOE established a new metric, the pump energy index (PEI). A value of PEI greater than 1.00 indicates the pump does not comply with the energy conservation standard, while a value less than 1.00 indicates the pump is more efficient than the standard requires. A pump model is considered compliant if its PEI rating is less than or equal to the adopted standard. The DOE based its final rule on the test methods recommended by the Hydraulic Institute and contained in its “Methods for Rotodynamic Pump Efficiency Testing.”

Both PEICL and PEIVL describe the weighted average performance of the rated pump at specific load points, normalized with respect to the performance of a minimally compliant pump without controls. The standard requires testing methods for both constant load and variable load equipment classes, recognizing each has distinctly different utilities to the consumer.

While the goal of the DOE’s initiative was to improve the overall efficiency of pumps sold in the U.S., it also wanted to encourage the use of variable-speed controls in variable load systems to maximize energy savings — thus the reason why it utilizes two PEIs for a pump. 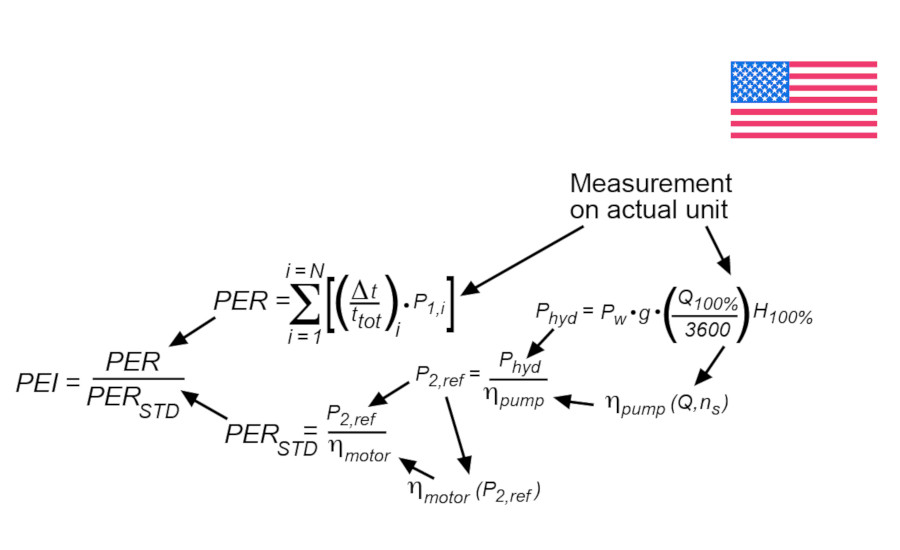 What else do I need to know about PEI?

Multiple configurations can be rated:

What is required of manufacturers in the testing process?

A pump performance test must be used to determine PEI for a bare pump. For extended pump product: 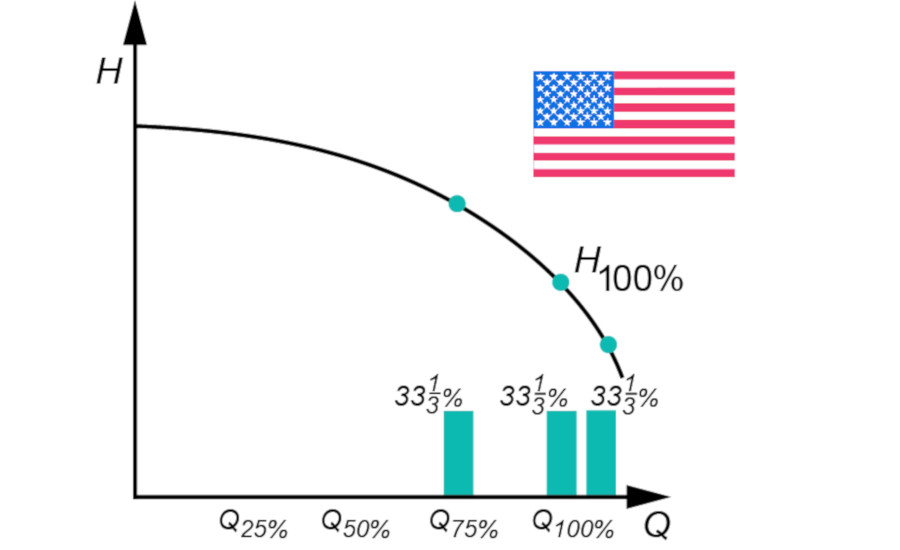 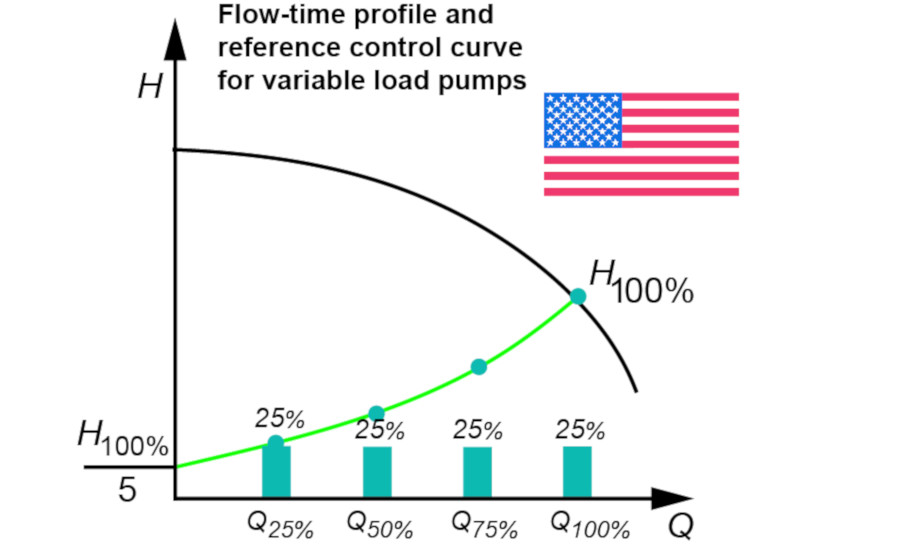 If I select the pump with the lowest PEI, will my system achieve optimal efficiency?

That is not necessarily true. For pumps of different type and different specific speeds, there are different baselines. Be sure that you are comparing similar pumps and aren’t making an apples-to-oranges comparison. The lowest PEIs are obtained from using pumps, motors, and variable-speed drives together.

How will I know a pump is compliant out of the box?

The DOE requires stamped pump nameplates to include PEI. In addition, the Hydraulic Institute, working with industry partners such as Xylem Bell & Gossett, have created an Energy Rating (ER) metric based on the DOE’s PEI. An ER label affixed to a pump ensures the pump has performed to published performance data and has been tested to DOE test standards.

What information is on an Energy Rating label?

The ER label is designed to clearly indicate the power savings obtained from pump system upgrades and changes. The HI Energy Rating is similar to the Energy Star program for household appliances. It provides estimated annual power savings for a specific pump along with the DOE-required PEI information. The label will include series, model, number of poles, and configuration — BP, bare pump; PM, pump and motor; PD, pump, motor, and drive.

Are there different ER labels for different pumps?

Tell me more about the HI Energy Rating program.

The HI Energy Rating Program is built on DOE regulations but is a separate energy rating system for bare pumps and extended products. Products with the ER label are listed in a database on the HI Energy Rating Portal, http://er.pumps.org/ratings/search, searchable by manufacturer, model number, and the rating ID listed on the hydraulic energy rating label distributed with the pump. Pumps in the database meet DOE energy conservation standards and have received third-party lab certification in accordance with HI 40.7.

Do any incentive programs exist for using energy-efficient pumps?

Yes. The HI Energy Rating program has become an impetus for public utilities and power companies to put in place pump energy rebates as a way to encourage energy conservation. In 2018, the Pacific Gas & Electric (PG&E) public utility in northern California began offering rebates for pumps that exceed the DOE’s PEI metric, requiring pumps to meet a 0.96 value. The more stringent energy efficiency requirements of utilities, such as PG&E — and likely the first of many to do so — underscore the need for specifying engineers to incorporate energy rating tools in pump selection and system design.

How will I know a pump is compliant when making selections via an online selection program, such as Bell & Gossett’s ESP-Systemwize?

In addition to the HI ER database, Bell & Gossett has added an energy efficiency rating box to each pump curve, which automatically appears in the ESP-Systemwize program.

What are the expected environmental benefits of the pump efficiency standard?

The DOE estimates the following cumulative emissions reductions over a 30-year period:

The above benefits are based on the following DOE estimated pump life expectancies:

Will the new efficiency standards affect other industry standards?

Yes. ASHRAE Standard 90.1, “Energy Standard for Buildings Except Low-Rise Residential Buildings,” is currently being updated to include verbiage requiring the use of DOE-compliant pumps. It is expected to be released by the end of 2019.

Are there other pump-related efficiency standards being considered by the DOE?

Yes. Efficiency standards for dedicated purpose pool pumps will go into effect in July 2021. The DOE had begun working on efficiency standards for circulator pumps, but the proposal has not been implemented by the DOE. HI and circulator pump manufacturers currently are creating an Energy Rating label for circulators, similar to the ER program for clean-water pumps. For more information, call 847-966-3700, email john.hein@xyleminc.com, or visit www.bgefficiencynow.com.