This website requires certain cookies to work and uses other cookies to help you have the best experience. By visiting this website, certain cookies have already been set, which you may delete and block. By closing this message or continuing to use our site, you agree to the use of cookies. Visit our updated privacy and cookie policy to learn more.
Home » Is Variable Fan Speed an Answer to Part-Load Efficiency in Modular Air-Cooled Chillers and Heat Pumps?
Cooling & Chillers

Is Variable Fan Speed an Answer to Part-Load Efficiency in Modular Air-Cooled Chillers and Heat Pumps?

Working closely with customers and their equipment at its Application Development Centers, Danfoss is sharing lessons learned from its design tests.

Part-load efficiency is rapidly becoming the most important measure of energy efficiency in chiller units. Around the world, new environmental standards are increasingly based on a combined part-load figure, reflecting the fact that chillers are rarely run at their full cooling capacity. Instead, measures such as Integrated Part Load Value (IPLV) and Seasonal Energy Efficiency Ratio (SEER) combine weighted averages at 100%, 75%, 50%, and 25% load for a more realistic view of energy consumption as it varies throughout the year.

With China and the U.S. both setting minimum acceptable standards for IPLV, and the European Union building SEER into its Ecodesign directive, equipment manufacturers are challenged to consider efficiency in a new way and prioritize part-load energy use — even ahead of nominal efficiency figures.

Testing variable speed drives for higher part-load efficiency chillers are specified to cope with peak demand, but in reality, they are rarely used under these conditions. It’s therefore important to find the most efficient way to step down their capacity when required.

To date, some manufacturers have concentrated primarily on boosting compressor efficiency under part-load. This is understandable as the central and most complex part of the

However, along with upgraded compressors, such as Danfoss scrolls featuring Intermediate Discharge Valves (IDVs), this study analyzes a complementary approach — installing a variable speed drive (VSD) to dynamically reduce fan speed in a modular chiller under part-load conditions and save energy in the fan motor.

It identifies optimum fan speeds for each load and goes on to extrapolate the potential impact on the unit’s IPLV score. It then gives an indicative payback window to see a return on the cost of variable speed drive (VSD) installation.

The growing importance of modular chillers

It’s no coincidence that this test focuses on modular, reversible, air-cooled chillers. The units are already well established in China where they are valued for their role in reducing pollution and carbon emissions compared to existing systems using fossil fuels as well as their easy scalability when new developments are expanding.

Not surprisingly, modular chillers are also growing in popularity in Europe as well as North America due to their flexibility and ease of handling, location, and installation. Similarly, an increasing emphasis on clean energy sources could help to make heat pumps a viable option in a wider range of settings with the appropriate ambient temperatures.

Danfoss tested a standard, 65-kW, air-cooled modular chiller unit available in the open market. We then analyzed it in our purpose-built psychrometric testing facility to confirm its cooling and heating efficiency under nominal operating conditions.

Having measured the unit’s nominal cooling and heating capacities, and its total power consumption, we were able to calculate its starting coefficient of performance (COP) at full load with its standard fan speed of 50 Hz.

We then installed a Danfoss variable speed drive in the modular chiller, allowing us to regulate the fan speed and evaluate the unit’s COP at a variety of driver frequencies. A Danfoss A/C frequency converter was used as standard across all the tests. This was chosen for its ease of use and also its accuracy and efficiency — making the results as clear and unequivocal as possible.

We then repeated the efficiency test for both cooling and heating at five different fan frequencies from 30-50 Hz. 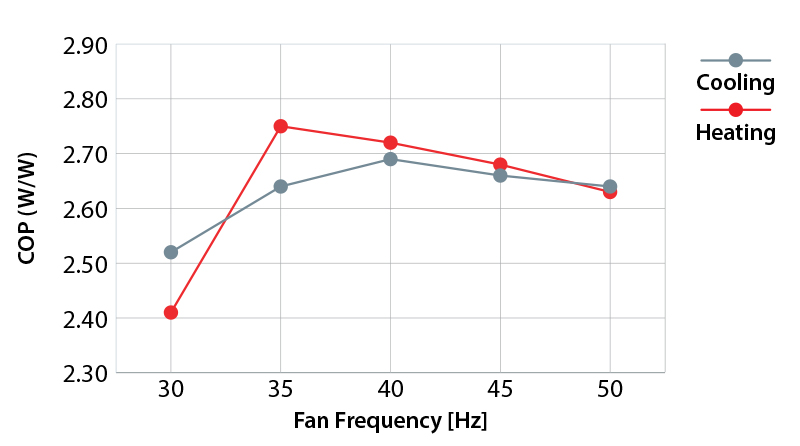 As it can be seen in Figure 2, at cooling full-load condition, slowing the fan to 40 Hz gave a slight improvement in COP (from 2.64 to 2.69). For heating, the effect was more pronounced; an optimal fan frequency of 35 Hz significantly reduced energy consumption with little effect on heating capacity —increasing COP from 2.63 to 2.75.

Step 3: Measuring the impact of fan speed on part-load efficiency

Our chiller for this test featured tandem compressors of equal capacity allowing only two steps of capacity modulation: full load (two compressors) and part load (single compressor). To obtain the part-load data needed to calculate IPLV, we used a single compressor at ambient temperatures of 28.8°, 28°, and 24.5° and fan speeds between 35-50 Hz. The ambient temperature was defined by interpolation, as required by the standard, and the outlet water was chilled to 7° with a flow rate of 11.18 m3/h.

In each case, the energy saved from reducing the fan speed far outweighed any corresponding increase in compressor power use — the slower the fan, the better the efficiency. This reflects the fan affinity laws: fan speed and power have a cubic relationship, where the one between fan speed and flow is linear. This means that each small reduction in airflow gives a proportionally larger saving in power consumption. 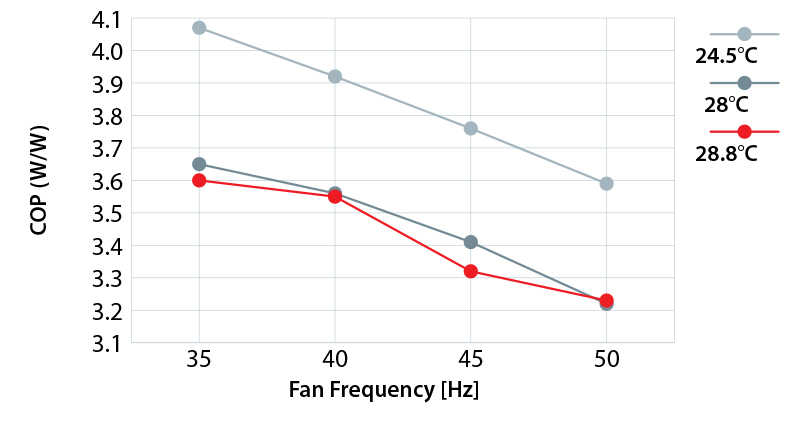 The minimum frequency used for the test was 35 Hz, in order to provide robust data as fan control becomes less precise at lower speeds; however, it’s possible that tests with fan speed below 35 Hz could show even higher COP,  especially at 50% and 25% load for chillers that are capable of performing at such low levels.

Reducing the fan speed improved the unit’s COP at every load level compared to the standard 50 Hz. And the lower the load conditions, the larger the efficiency increase. As per the standard, we used interpolation between test data points to calculate COP values when the chiller could not run at the specified load conditions.

This potentially gives this solution an important role to play in increasing IPLV and SEER values — where the majority of the final figure is calculated based on 50% and 75% part-load values. 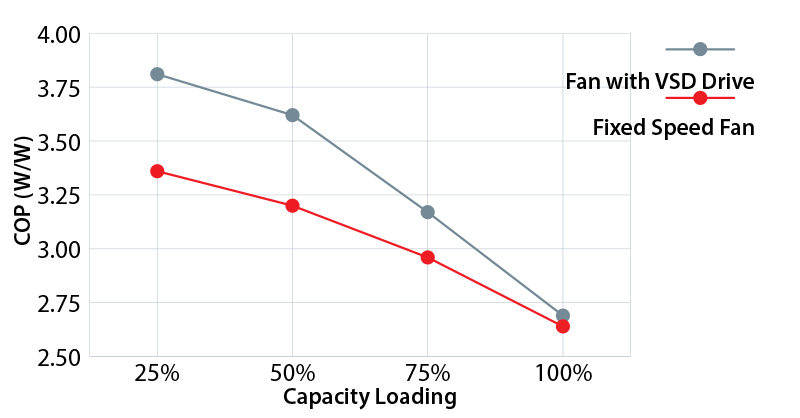 For the Chinese standard, the IPLV calculation to measure air-cooled modular chillers uses weighting factors at each load point, as seen in Figure 5. 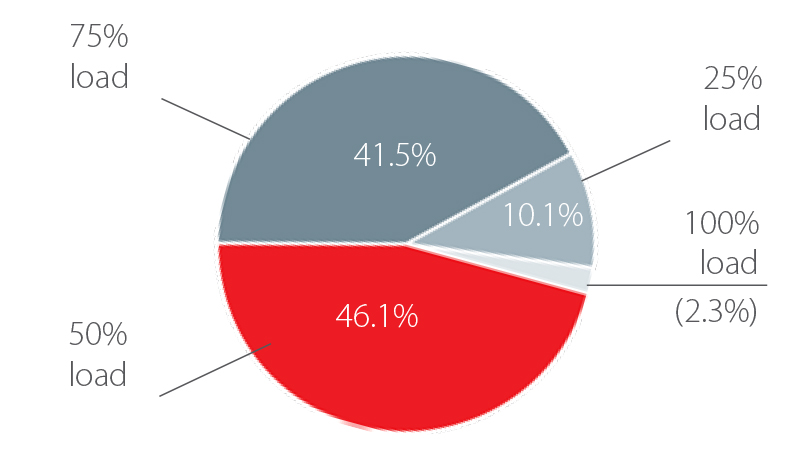 While the precise weightings vary slightly for other standards, the principle is the same. Based on these weightings, the observed test results correspond to around a 10.6% improvement in the unit’s overall IPLV score (Table 5).

Table 5. Calculation of the IPLV value for the chiller.

The IPLV value for the chiller is calculated by multiplying the COP value at each load condition (Table 4) by its weighting as defined in the standard (Figure 5).

For manufacturers, the meaning of these findings are clear: incorporating a variable speed drive into a chiller system’s measurements.

There is also a direct benefit for equipment users in the form of significantly lower running costs. For example, if the unit we tested was to be run for 12 hours a day throughout 100 cooling days, the efficiency improvement demonstrated in the test would produce a saving of 1,427 kWh.

Based on a commercial electricity price of $0.13/kWh, this equates to a saving of $186 in one year. Considering the typical cost of installing a variable-speed drive on this size of motor is approximately $500, the modification would pay for itself in as little as 2.7 years. In areas where electricity prices are higher, the payback period will be even shorter.

As both modular chillers and part-load efficiency continue to grow in importance, Danfoss expects to see an increasing number of systems using variable speed drives in this way in complement with other system designs featuring staged or inverter driven compressor modulation or IDV technology.

Mustafa Yanik is a global application expert in air conditioning for Danfoss.

Liu Yabing is an advanced system applications specialist for Danfoss.

Where To Place Air-Cooled Chillers

Air-Cooled Chillers Are Back in Data Centers, and They Mean Business