SMITHGROUP-AI would be an independent, multifunctional reinforcement learning software agent responsible for the monitoring and control of all agents that control all building systems.

Imagine a world where all HVAC equipment, (i.e chillers, variable frequency drives etc.), all BAS sensors, various components of the electrical systems (i.e electrical panels, meters, lighting fixtures etc.), and various components of all other infrastructure systems are connected to a shared, non-proprietary network that integrates the functionality of each system. The system arrives as an approximate model incorporating all building systems. It proceeds to continuously refine and adapt itself based on the live feedback it receives from the building systems. It predicts the need for maintenance while keeping the building operating at its most comfortable, healthiest, and energy efficient.

In this world, engineering systems are moved from passive/reactive/linear to active/interactive/proactive systems that reduce the need for manual adjustment and monitoring yet offer more capability within the building through faster turnover of key spaces, more real estate value from higher end-user demand, and increased support for the Smart Region movement.

SmithGroup is proposing a technology that is based on using a ‘multi-agent Reinforcement Learning system’ that eliminates the need for any proprietary controllers and their associated sequences. SMITHGROUPAI would be an independent, multifunctional reinforcement learning sof

In the December 2018 issue of the Engineered System Magazine, SmithGroup published an article that described the limitations of the current BAS architectures and possible workarounds that could be implemented in order to allow the building systems to be controlled almost in real time by machine learning algorithms. We are now seeing that the best value for building owners must include AI technologies that create opportunities to be more agile and proactive. In this article, we will focus on one possible approach for the application of AI in the design and operation of building systems.

A BAS, otherwise known as a building management system  (BMS), is a computer-based control system installed in a building that controls and monitors the building’s electrical and mechanical equipment. This includes systems such as ventilation, lighting, power systems, fire systems, and security systems. As such, a BMS may also include a variety of devices (e.g., HVAC devices, controllers, chillers, fans, sensors, lighting controllers, lighting fixtures, etc.) configured to facilitate monitoring and controlling the building spaces and equipment.

BASs, as local pre-programmed monitoring and controlling solutions, have improved building operational effectiveness over the past 20 years. These systems rely on hardcoded, and often proprietary, configurations of flow charts and logic diagrams with options and pathways guided by a network of monitoring devices. Once programmed, they respond in a preset manner that is difficult and costly to adjust later on. 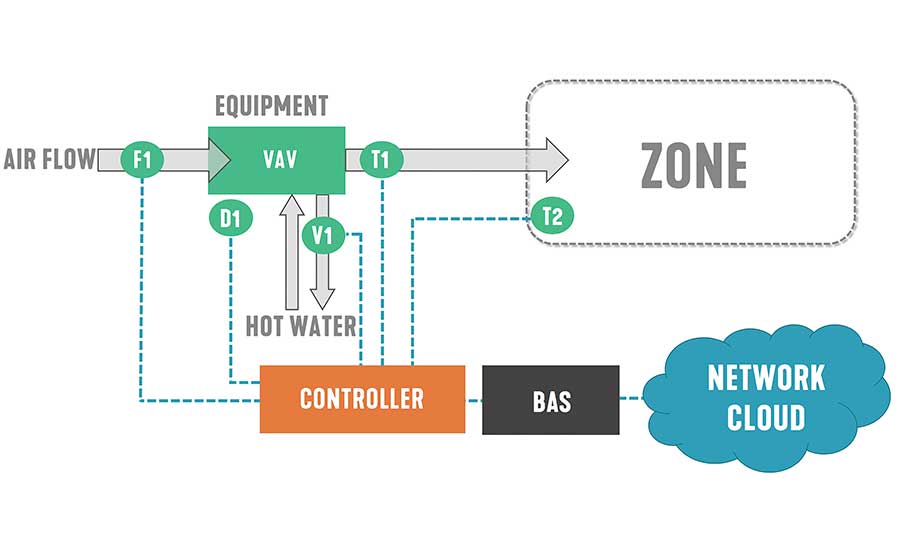 Typically, even though the building controllers, input-output devices, and various switching equipment communicate via open source networks, such as BACnet, LONworks, Modbus, etc., the devices themselves rely on proprietary formats that must be programmed by their manufacturers (in exchange for considerable fees). Once equipped with sequences of operations, the controllers are often left to run their respective systems without further supervision or future adjustments. A typical zone control diagram using the current controls system architecture can be seen in Figure 1.

In the spirit of the Internet of Things (IoT), recent years have seen the development of a plethora of cloud-based building optimization packages intended to ride on top of existing BMS. These packages, sometimes advertising energy cost savings in excess of 30 percent, aim to enable more active and comprehensive control over building systems; however, the latency and hardware limitations of the underlying network of controllers remains, and while vendors guard their exact methods of optimization as a trade secret, the bottleneck introduced by the controller network is certain to cause substantial handicaps to even the most powerful optimization packages. At the same time, the cost of optimization packages is further driven up by requiring the controllers to be reprogrammed to interface with the package’s application programming interface (API). Optimization remains rare as a consequence at an unknown cost to both building owners and the environment.

A typical diagram of this process/architecture is shown in Figure 2. In this scenario, even the most powerful optimization packages will be handicapped by the speed of the BAS networks and the processing capacity of the proprietary controllers themselves. 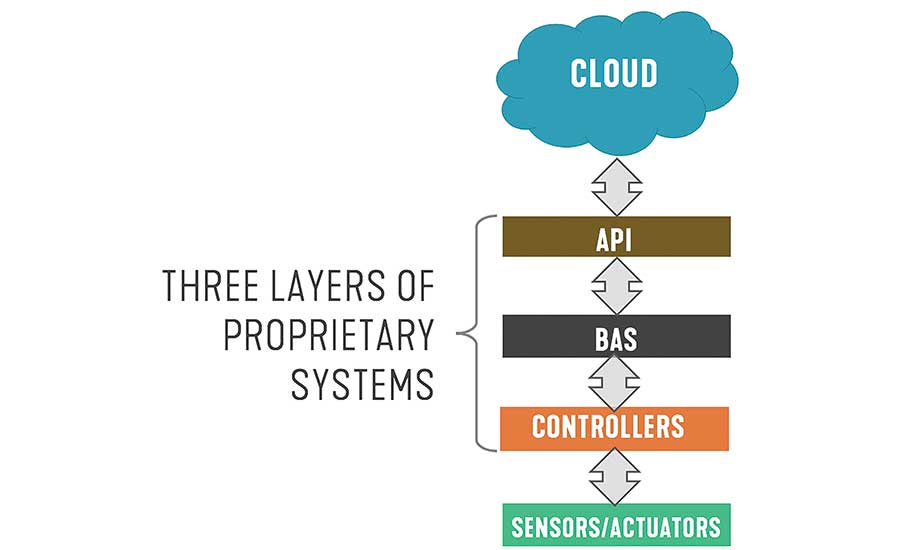 SmithGroup is proposing a technology that is based on using a “multi-agent reinforcement learning system” that eliminates the need for any proprietary controllers and their associated sequences. SMITHGROUP-AI would be an independent, multifunctional reinforcement learning software agent responsible for the monitoring and control of all agents that control all building systems. The system allows for the direct readout and control of all sensors and actuators in a building without intermediating proprietary controllers. Instead, software agents and building systems would communicate directly over a building-wide network. (Figure 3). 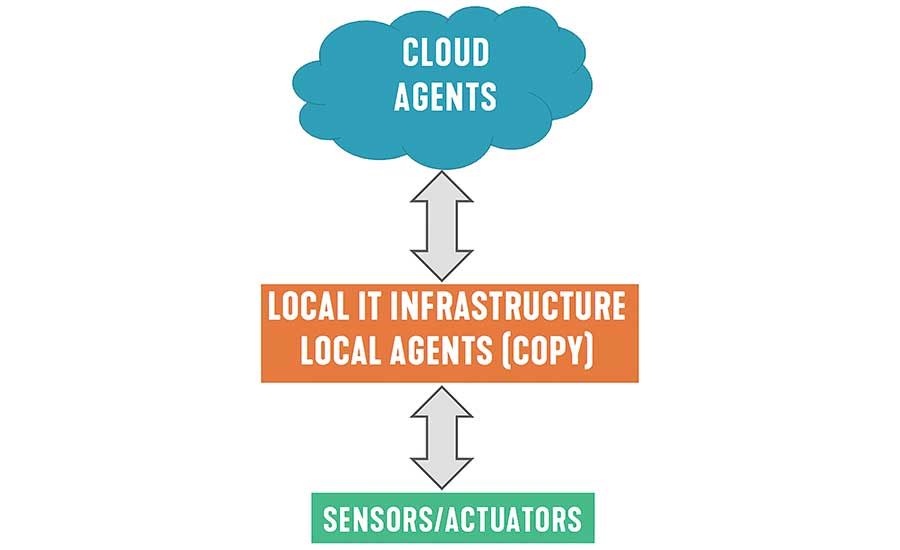 As shown in Figure 4, a copy of all control software will always and continuously be saved on the local IT infrastructure so that the building may be controlled irrespective of whether the interface to the cloud server is active. In addition to providing supplementary computational power, the cloud interface allows for sophisticated remote monitoring of the building systems, including diagnostics and predictive maintenance and the addition of external data sources, such as room scheduling and weather data into the optimization process. 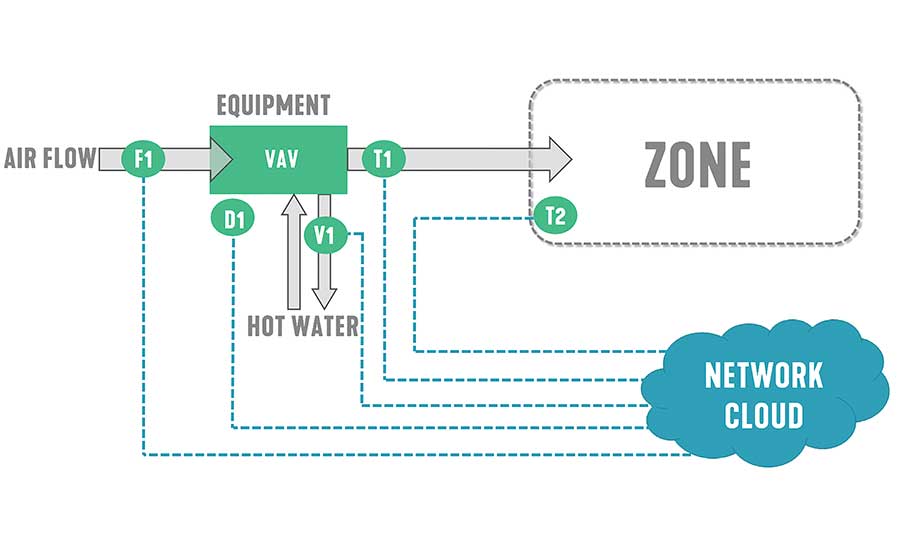 Fortunately, the proposed technology will not require the development of new sensors or actuators. The latest available BACnet sensors and actuators are rated either as smart sensors (B-SS), smart actuators (B-SA), or application specific controllers (B-ASC). This allows the sensors and actuators to support high level BACnet Interoperability Building Blocks such as Read Property, Write Property, Change Of Value, and also various BACnet Standard Application Services such as WhoHas and WhoIs. Further, various sensors and actuators are capable of communication not just via a BACnet MS/TP protocol but also via BACnet/IP. Finally, but not less important, various HVAC and electrical equipment (i.e chillers, boilers, variable frequency drives, electrical meters, etc.) can connect directly to a BACnet MS/TP network or BACnet/IP network without the need to go through  a standard BAS controller.

We envision the architecture of the novel, underlying control software as follows: Each building system will be controlled by a dedicated system agent known as a system coordinator. The system coordinators would communicate among themselves and with the main agent/brain  (called SMITHGROUP-AI), and all agents and coordinators will share knowledge to continuously improve their predictions through reinforcement learning.

The SMITHGROUP-AI agent is responsible for directing and coordinating the communication between all other system coordinators. The system coordinators would follow the orders received from the main agent if and only if such orders would not interfere with the internal laws of an agent, such as constraints on equipment setpoints.

The system agents would then be responsible for monitoring and controlling all associated sub-agents, senors, and actuators.

This modular approach to the design of the agents would provide the owners with the flexibility required to add and/or modify various systems and/or zones without the need to reprogram an agent.

The sensors and actuators collect information about the conditions of the space or the current conditions of the equipment and then send that information to the agent that would then send the information to the coordinator. Based on the results of the agent’s and/or coordinator’s analysis, the command can then be sent to the controlling agent that will direct the actuators to run in a way that satisfies the requirements of the space.

Additionally, in order to allow the system to adapt to changes in the building, the agent architecture is based on a  multi-agent reinforcement learning approach. This would allow the agents to learn about their environment over time to improve their ability to predict changes in a building’s operation, whether it be from changes in the outside environment or from internal loads that ramp up and down throughout the day.

By obviating proprietary controllers, the system design allows for a drastic increase in the speed of a building network so that information can be collected, processed, and relayed to the appropriate equipment at a much faster rate. The computational power that can be directed toward automating and optimizing the building is also no longer constrained by the hardware of the controllers. This allows higher customizability, for example toward the unique needs arising in high-performance environments such as health care facilities and improved thermal comfort owed to lower system response times.

It also creates new opportunities for optimization. The disinter-mediated flow of information between system components is conducive to a more holistic approach that strives to optimize the energy use of a building as a whole, balancing the requirements of interrelated systems against each other. It is not required nor assumed that SMITHGROUP-AI would operate each system at its most energy efficient point. This means that in some instances, and depending on the cooling and heating loads in the building and the cost of the associated energy sources, it will be more energy and cost efficient to deliver more airflow (i.e more fan horsepower) at a warmer temperature than delivering less airflow at a colder temperature.

The added insight into building performance also allows for more fine-grained insight into predicted energy consumption, including the ability to harness the predictive power of emergent AI technologies.

Freed of controllers that run proprietary firmware, building controls can evolve toward an open source paradigm that enables owners to decide between control and optimization software developed by different vendors competing in an open market place. As it happened in many other domains of digital technology, the business practice of customer lock-in in the building controls market is destined to come to an end. ES

The author would like to thank Balthasar Mueller, Rosemary Hwang, Mary Taylor, Kevin Andreone, Kevin Ricart, Cristina Bump, and Tal Kachman for their contributions to the article.