A non-exhaustive overview of belt and direct drive fans for industrial fan applications between 1-250 hp.

Airstream conditions should be considered when choosing between an Arrangement 4 fan and a shaft driven belt or direct drive fan. Due to the presence of the motor shaft in the airstream, Arrangement 4 fans are best suited for relatively clean airstreams having little to no moisture and low particulate concentrations. Shaft driven belt or direct drive fans are well suited for clean or contaminated airstreams that have higher particulate loadings, gases, vapors, or chemical compositions that might attack the exposed motor shaft on Arrangement 4 fans.

The environmental conditions in which the fan is installed may dictate a preference toward a belt or direct drive fan. Extreme hot, cold, dirty, or humid conditions may favor a direct drive fan as it reduces the environmental impact on the drive belts and fan bearings. Fans installed on the top of heat-generating equipment, such as furnaces or dryers, or those located in limited maintenance access areas, may also favor the direct drive fan. Figure 2-A shows a belt drive fan installed in a dust-laden environment that can attack the belt and bearing life. Figure 2-B shows a belt drive fan installed at the upper section of a silo having limited maintenance access to service the belts and bearings. 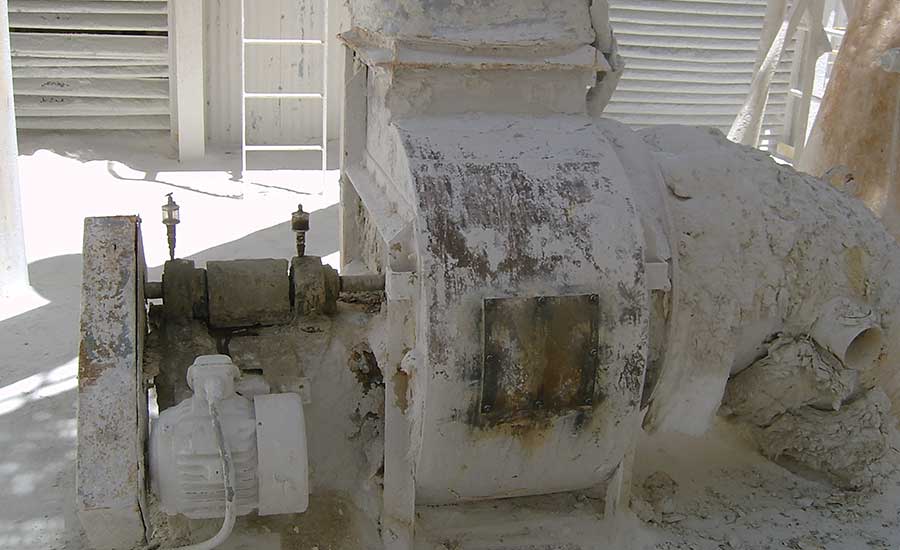 Fan noise is a type of unwanted sound from the fan and can either be aerodynamic or mechanical. Aerodynamic noise varies with fan efficiency, while mechanical noise varies with the mechanical components used to drive the fan. Mechanical components having the greatest impact on fan noise are the fan bearings and v-belt drive. In noise-sensitive applications, Arrangement 4 fans will have the lowest and most easily controlled mechanical noise, followed by Arrangement 7 and 8 direct drive fans. Belt drive fans can be successfully applied if the mechanical noise can be abated by a partial or full noise enclosure around the fan. 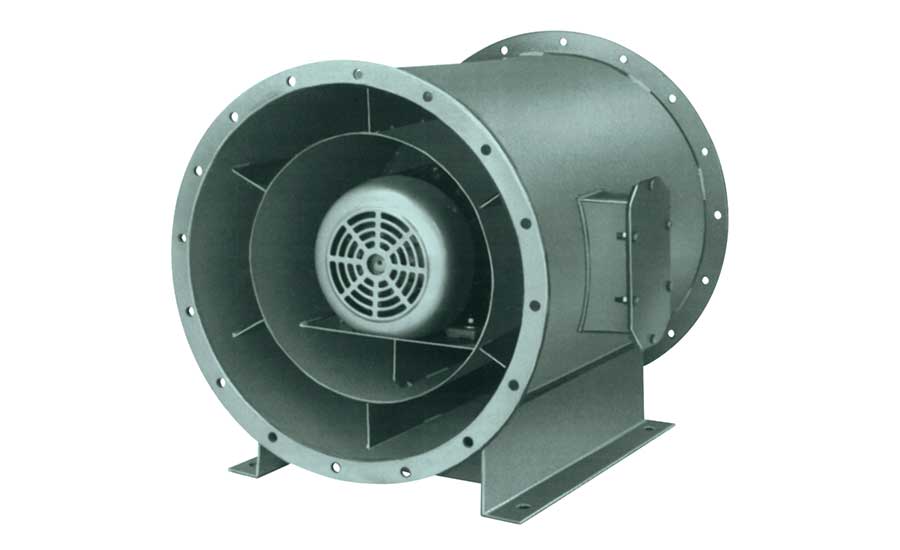 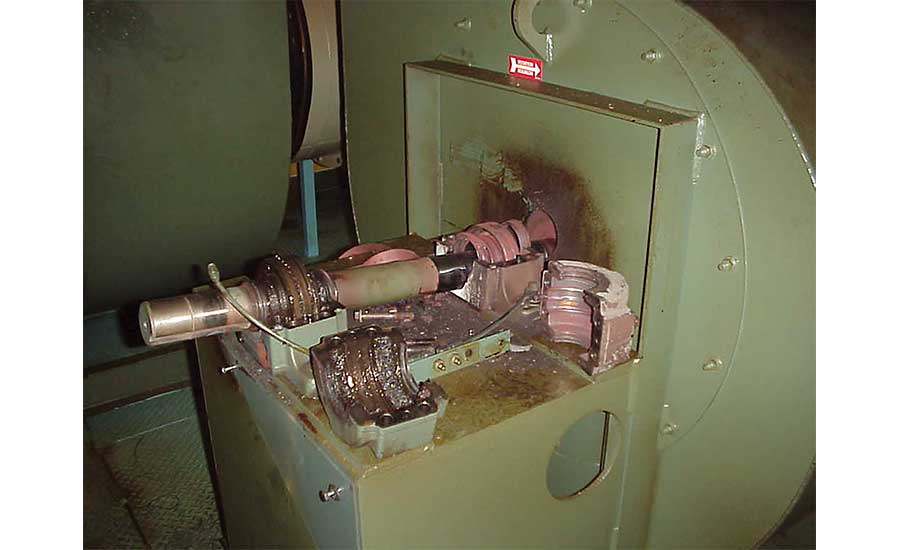 Other advantages include easier monitoring of bearing vibration and/or temperature on Arrangement 4 fans and lower overall vibration levels due to fewer rotating parts.

Figure 4 shows a fan bearing failure on a fan that was installed on the upper level of a mezzanine in a difficult maintenance access area.

Another feature of Arrangement 4 fans is the ability for the fan manufacturer to build the motor and wheel as a pre-assembled, replaceable, plug-type assembly. In this case, instead of changing out a failed motor or wheel in situ, a spare motor-wheel unit is kept in stock and replaced as a pre-assembled unit, allowing the repair to either the failed motor or wheel to occur at a more convenient schedule. This does require the fan housing to be constructed with either a housing split or a removable plug section on the housing drive side.

By nature of the ease of configuring v-belt drive components (sheaves and belts), belt drive fans offer a wide flexibility in fan speed ranges when operating with a fixed-speed motor. However, with the continued affordability and acceptance of electronically commutated motors (ECMs) and VFD controllers, direct drive fans are becoming much more popular. Note that since ECMs are normally less than 7.5 hp and often single phase, the following comments will be for VFD driven fans.

Normally, this means using the VFD to reduce the motor speed from its rated nameplate rpm, but in some cases it is allowable to over-drive the motor speed in order to run the fan at a higher speed. In all over-drive cases, the fan hp demand (load) cannot exceed the listed motor nameplate hp. While it is becoming acceptable to run an over-drive of up to 1.5 times the motor nameplate rpm for motors under 40 hp, it is recommended to gain motor and drive manufacturer’s approval for any over-drive application, especially for higher horsepower applications.

Regarding fan speed turn-downs lower than the motor nameplate rpm, most motors are suitable for turn-down ratios ranging 6:1-10:1. This allows a wide range of flexibility in fan speed turn-down, but keep in mind that at sustained operation at very low turn-downs, fan cooled motors may not generate enough cooling to satisfy the motor heat load. Check with your motor supplier if in doubt. 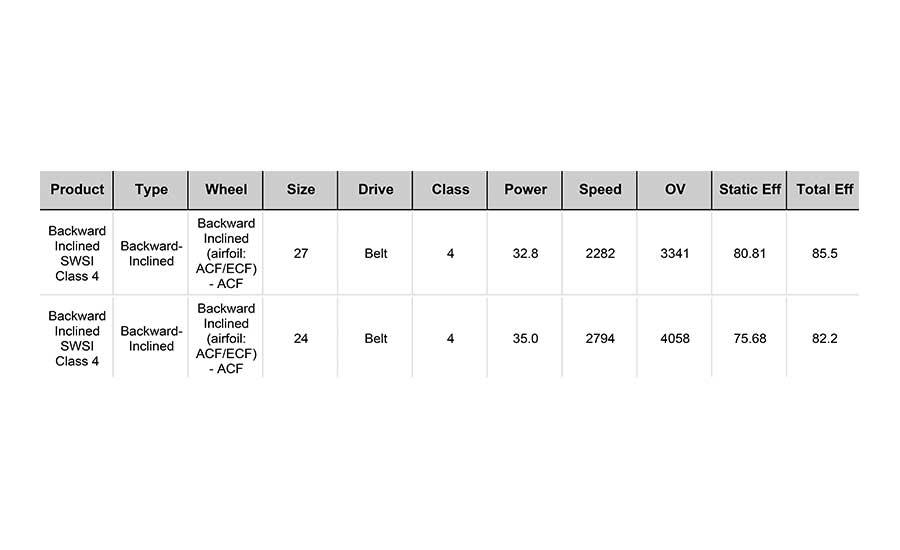 If multiple fans are installed in a common location (mezzanine, dryer, etc.) in close proximity to each other and running at the same design speed, a beat frequency can occur from the fans running in the same cycle. In these cases, a VFD controller can be used with either direct or belt drive fans to avoid this problem by varying the speeds of adjacent fans while still maintaining the same overall system flowrate. 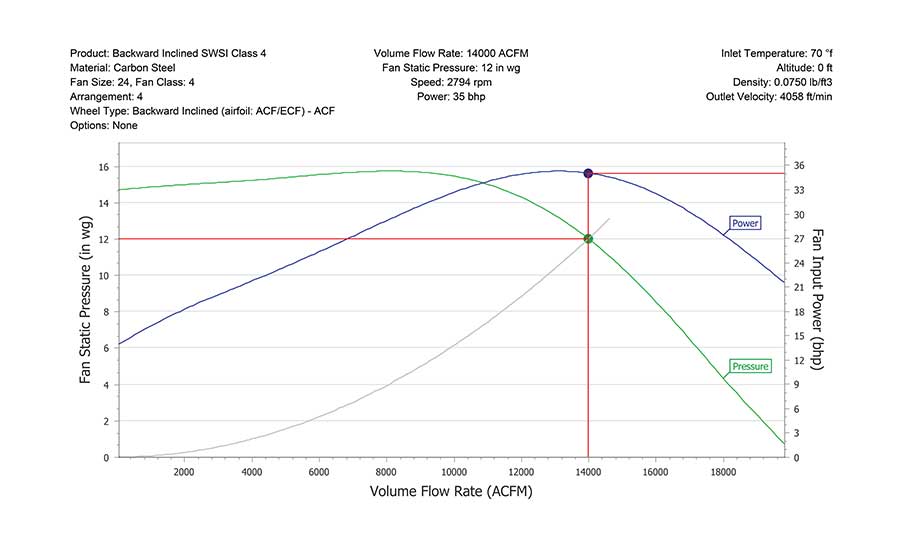 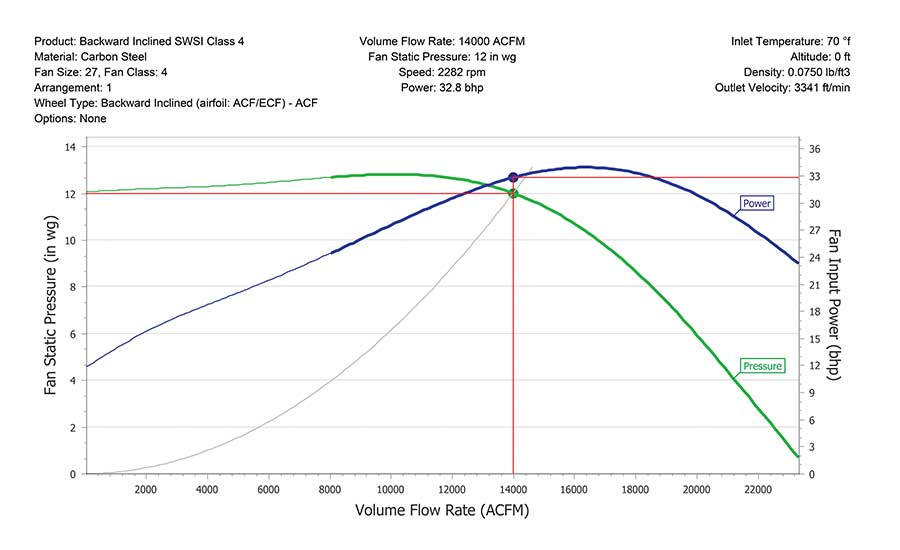 The following data shows a selection between size 24 and 27 fans.

Since fans are variable load machines with power varying with the cube of the change in speed, the highest efficiency is to operate the VFD in the squared volts to hz ratio as it most closely mimics the fan speed to power curve. But it’s not uncommon to use the linear ratio as the actual difference in efficiency is often very small.

Using the following formulas to calculate fan motor horsepower selection, we find that:

To operate the motor in the VFD squared volts to hertz ratio configuration:

To operate the motor in the VFD linear volts to hertz ratio configuration,

Selecting a motor for the size 24 direct drive fan based on the squared volts to hz ratio means that we need a 58.1 hp motor, so a 60 hp motor is required.

Selecting a motor for the size 24 direct drive fan based on the linear volts to hz ratio means that we need a 45.1 hp motor, so a 50 hp motor is required.

There are a number of variables to consider when choosing between a belt drive and a direct drive fan. The final decision should always be weighted based on the variables that are most important to the specific application.

Khalil Kairouz, Ph.D., P.E. (corresponding author) is an Associate Vice President at Carollo Engineering, a consulting firm that specializes exclusively in water and waste water treatment, located in Costa Mesa, CA. Dr. Kairouz has a doctorate in engineering and applied mathematics and has taught at Loyola Mary-mount University and California State University in the Mechanical Engineering Department. He can be contacted at kkairouz@carollo.com
Price is president of M&P Air. He can be reached at dprice@mpair.com.
You must login or register in order to post a comment.