Boiler Fundamentals: Examining All Sides of the Combustion Triangle

The first step toward the safe and productive operation of boilers is a good working knowledge of boiler fundamentals.

Industrial plants need steam for heating and other processes. Boilers are commonly used to provide this steam, and you may be called on to operate the boilers in your plant. The first step toward the safe and productive operation of boilers is a good working knowledge of boiler fundamentals.

The function of boilers is to produce steam. Steam is produced by heating water to its boiling point. When water reaches its boiling point, it changes from a liquid phase to a vapor phase. It’s this vapor that we call steam. To produce steam, you essentially need two things — water and heat. To generate the heat needed for steam production, boilers rely on the process of combustion, which is the burn of fuel to provide the required heat. 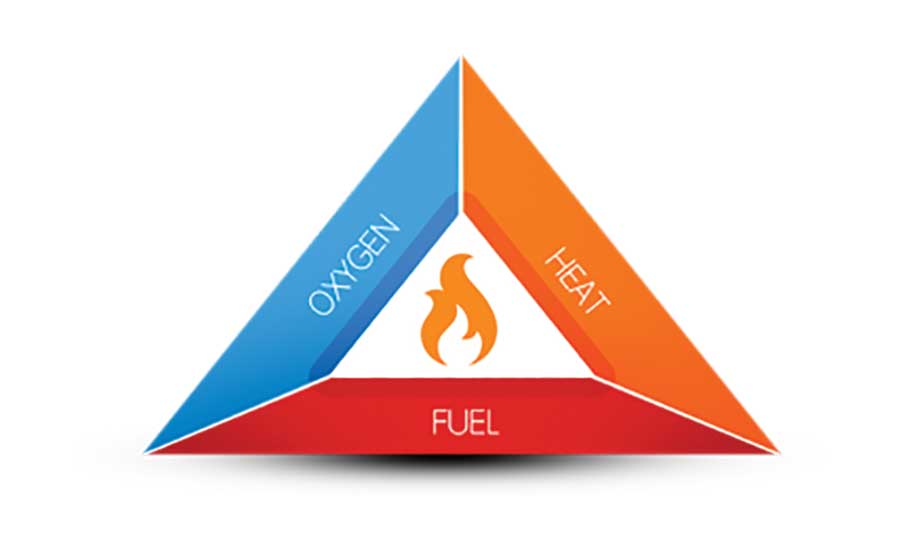 In this process, NO, NO2, and NO3 (nitrous oxides, NOx), as well as carbon dioxide, are produced. The NO family is formed as nitrogen in the air is mixed with excess air. This process is common for all types of boilers.

The two requirements for steam production are water and heat. The heat is provided by combustion. Boilers are designed to allow the requirements for steam production and combustion to come together. The function of a boiler is to convert energy contained in the fuel into high temperature steam. Power plants, depending on the size, use different types of boilers. Water-tubed boilers, where water flows through the tube and fire surrounds it, are among the most common types of boilers. These units are ideal for high-pressure applications.

Fire tube boilers also can be used for small applications. Burners in the boiler convert chemical energy into thermal energy. The hot gas that is produced travels all over the boiler. The first heat absorption unit of the boiler is the economizer. Highly pressurized water supplied by the feed water pump enters the economizer. The economizer absorbs energy from the flue gas, which raises the temperature of the liquid. From there, the water flows into a steam drum to the down comer. It then passes through a narrow tube section called a water wall. The phase change of the water happens in the water wall. The steam that is produced, in addition to some water droplets, enters the steam drum again. The real function of the steam drum is to separate the water droplets from the steam. As a result, the steam leaving the steam drum is saturated and pure. 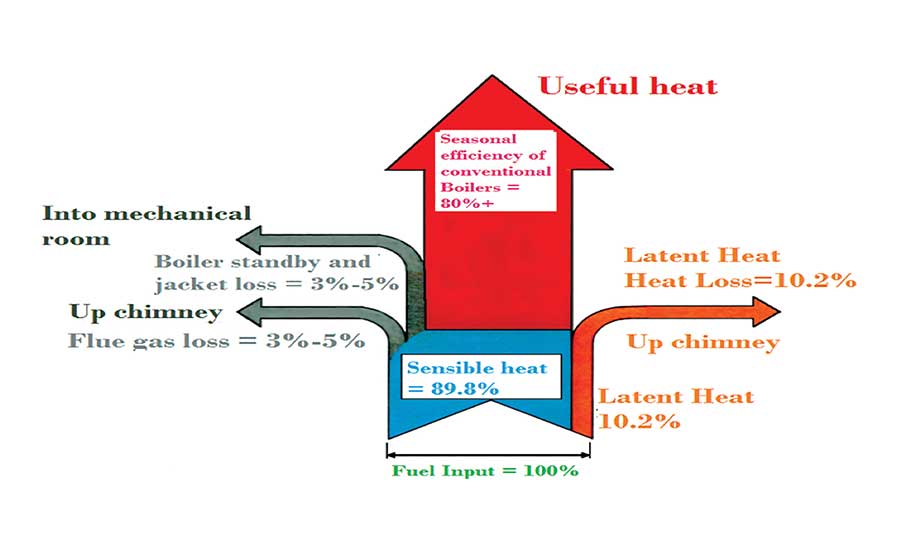 According to the second law of thermodynamics, the greater the temperature of the heat source, the more efficient the cycle is. Therefore, making the steam temperature very high will result in a highly efficient power plant, but this temperature increase has certain limitations. The steam turbine blade material cannot withstand temperatures greater than 600ºC. So one more heat exchange is added after the steam drum to superheat the steam and make sure it is heated to the maximum allowable limit. Superheating also reduces the moisture content in the steam. The steam is then supplied to the turbine inlet. After the first turbine stage, the temperature drops. One of the best solutions to increase power plant efficiency is to bypass the steam completely after the first stage and add more heat. This process is known as reheating. A heat exchanger known as a reheater is used for this purpose. Reheating and superheating also increase the power plant capacity along with the efficiency. 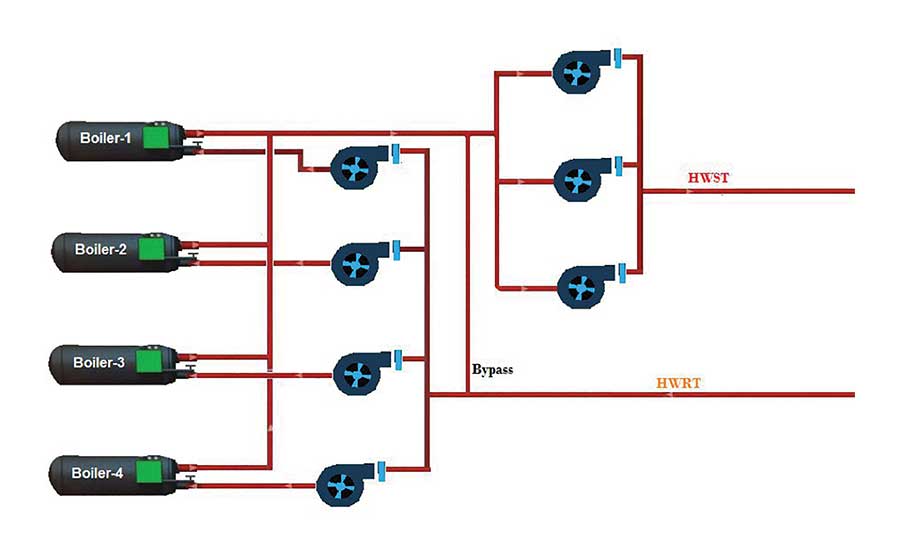 Some facts about boilers

When the temperature increases, will the pressure increase too? Water inside the boiler is an open flowing system. The water is free to expand when the liquid is converted into steam, which means the pressure should remain the same throughout an ideal boiler. In reality, the pressure doesn’t remain constant, and usually there is a small drop across the boiler due to friction and other irregularities. 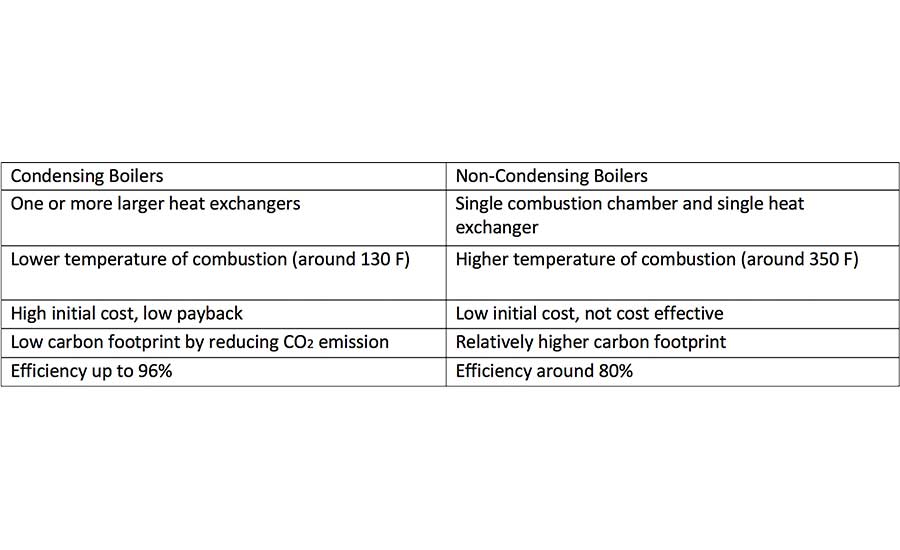 The typical heating systems in industrial/commercial facilities include boilers, hot water pumps, VFDs to adjust speed, pipes, discharge pressure sensor, AHU heating coils, and VAV reheat coils. Figure 4 shows a heating system serving a five-story hospital. The system includes three gas-fired boilers piped in parallel with three non-dedicated hot water pumps. The pumps are equipped with VFDs, which allows them to modulate based on the discharge pressure sensor. How well the condensing boilers fit within the boiler/heating system’s design and operate in condensing mode depends on the return water temperature from the building.

The rule of thumb in designing heating systems is the greater the temperature differential between the supply hot water temperature and return hot water temperature, the more efficient the system will be. Usually, HVAC designers find a balance between the design gpm and the delta T to minimize the energy consumption and maximize system efficiency. Typical measures in order to reduce energy usage include the following:

Tips to maximize your boiler efficiency:

Amir Salarifard, P.E., LEED AP, is a retro-commissioning project manager at Bernhard TME. He has worked in the building industry for more than nine years as a mechanical engineer, focusing on energy efficiency and providing design/guidance for HVAC systems optimization, building envelope retrofits, energy modeling solutions, and building analytics analysis. Salarifard obtained his master’s degree in mechanical engineering from the University of Illinois at Chicago and earned an ASHRAE scholarship in 2014 and 2015. Contact him at salari6889@gmail.com.