Brush up on NOx formation and low-NOx technologies for fuel gas burners used on industrial watertube packaged boilers in the U.S.

Why is NOx such a major concern in the U.S. and elsewhere? NOx consists of roughly 90% to 95% NO and perhaps 5% to 10% NO2. Those associated with fossil fuel fired boilers and other furnaces are from the combustion of these fuels and these pollutants’ subsequent exposure to the atmosphere. These resulting emissions are considered harmful and particularly bad in heavy populated and industrialized areas. NOx is a precursor to ozone, which is a major pollutant. It’s also blamed for acid rain formation and the degradation of forests as well as crop destruction. Many papers have already been written about the chemistry involved, so no need to dwell on it here.

Needless to say, the orange brown haze resulting in smog in populated areas during hot summer days is unhealthy, and the result has been many federal and state laws governing the reduction of NOx from combustion processes of all types. The effort to reduce NOx emissions is accelerating throughout the world — witness the choking hot summer days in Mexico City, Beijing, and other major cities in the world, as well as major cities in the U.S. Much of the focus on NOx emissions and ozone levels in the U.S. started in populated areas of the Los Angeles basin of Southern California. While significant strides have been made to reduce NOx and ozone levels there, Los Angeles and Bakersfield still are considered among the worst in the nation. Strict emissions regulations first mandated in Southern California have spread like wildfire to other industrialized and populated areas of the U.S. suffering from air pollution.

NOx formation from the combustion of fuels

There are three types of NOx encountered in the combustion of fossil fuels: Thermal NOx from the disassociation and reaction of atmospheric nitrogen at elevated flame temperatures; Prompt NOx instantaneously formed in the presence of CH radicals; and Fuel NOx from the combustion of fuels containing chemically bound nitrogen. Thermal NOx is the highest contributor to total NOx levels in a typical natural gas fired burner. It occurs due to the disassociation of atmospheric nitrogen in the combustion air required for combustion. At furnace temperatures above ~2,700ºF to 2,800ºF, thermal NOx rises significantly in this process. Anything that can be done to reduce the flame temperature will result in reduced thermal NOx levels, including ambient air temperatures in lieu of preheated combustion air. 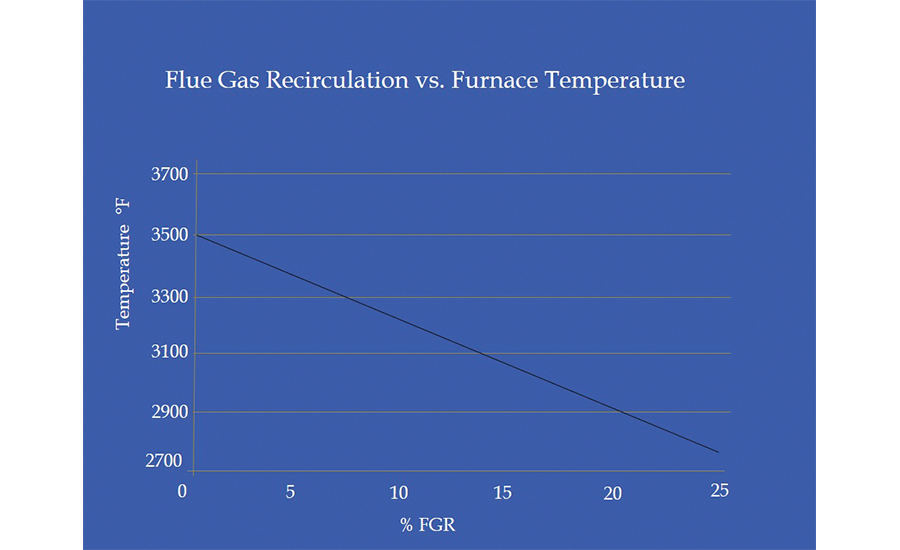 The formation of Prompt NOx happens in the very early stages of combustion, hence the name  “prompt.” It occurs due to the presence of hydrocarbon radicals in fuel rich flames. Because it is rapidly formed, it is not possible to deal with it in the later stages of combustion, meaning the use of fuel staging or air staging to stretch out flames, or flue gas recirculation to dilute O2 levels, are ineffective at reducing it. Prompt NOx levels in conventional burners may only be as high as 10-20 ppm, but without means to reduce it in the combustion process through special designs to eliminate or significantly reduce fuel rich zones, it otherwise must be addressed through the use of SCR or NSCR technologies at the boiler outlet. More on this later in this discussion.

Any fuel that contains bound nitrogen, such as fuel oil, will result in the formation of fuel NOx in the combustion process. During this process, nitrogen atoms are liberated as unstable nitrogen and a fraction of it is converted to NOx. The amount of nitrogen in common light oils, such as diesel fuel or No. 2 oil, is relatively low, and fuel NOx formation is relatively low. In many parts of the country, low nitrogen light oil from refinery processes is available to further minimize fuel NOx levels. Preheated fuel oils, such as No. 6 oil, usually contain high levels of bound nitrogen and add significantly to total NOx levels. 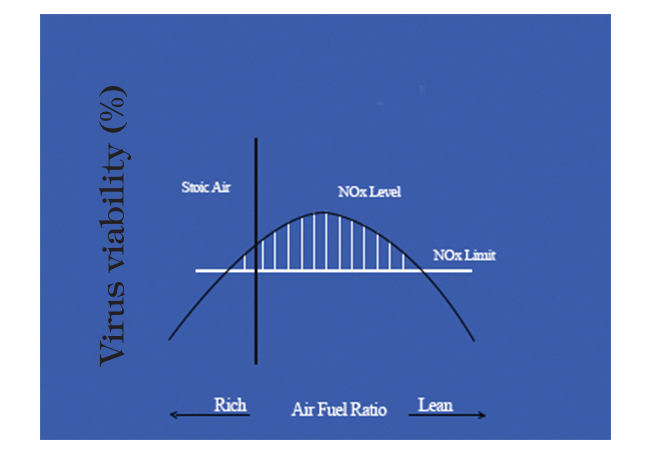 It should be noted that some natural gas sources, or other fuel gases, may contain small amounts of N2, but it is not chemically bound; it does not result in the production of fuel NOx when burned. Instead, it acts the same as atmospheric nitrogen and only results in thermal NOx formation. However, if such gasses contain ammonia (NH3), which contains chemically bound nitrogen, it will result in fuel NOx formation in the combustion process.

The current focus of fuels used in industrial watertube packaged boilers in the U.S. is on natural gas due to its availability and low cost, coupled with the ease in meeting emission requirements vs fuel oil. Comments that follow are primarily focused on the use of natural gas. NOx reduction technologies applied to fuel oils are left for another time.

If air staging is employed, air is typically injected around the burner exit. A burner installation might employ both fuel staging and air staging. This results in fuel rich and/or fuel lean combustion zones. Typical thermal NOx reduction might range from 40% to 60% or more for some burner designs. 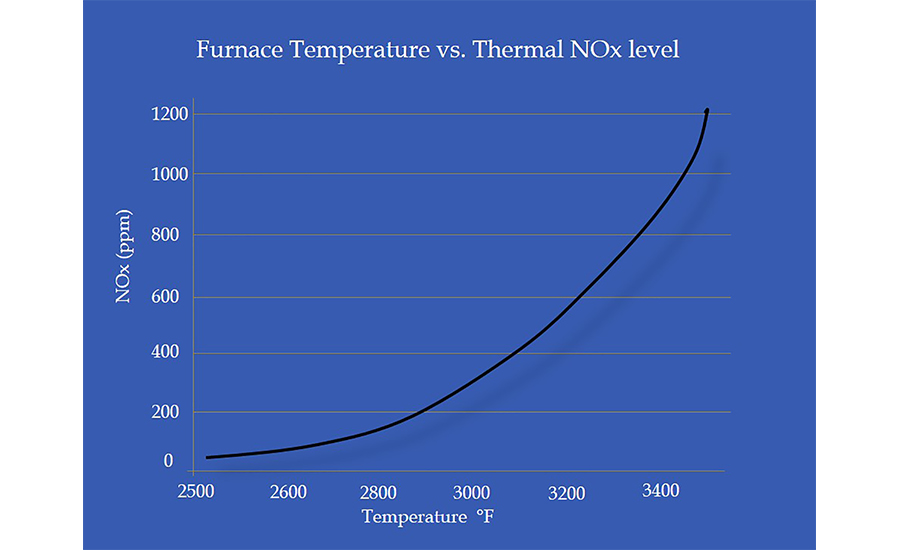 There are several ways to supply recirculated flue gas to the combustion process. Most industrial burner suppliers induce it using a larger than normal combustion air fan. This fan must be large enough to handle the increased total flow of FGR and air, along with the higher associated system pressure drop. FGR is induced to the suction side of this fan, usually employing an FGR connection on the side of a mixing box or equal to properly mix it with combustion air. (Though not as common, FGR can also be supplied using a separate dedicated fan to inject spent flue gas in the combustion air ductwork or burner windbox).

When FGR is used along with a conventional low NOx burner to lower NOx, the amount of FGR may vary from 5% to 15% or more depending on the individual burner, boiler design, and operating conditions. NOx levels achieved with some low NOx natural gas burners using FGR can vary from perhaps 12 ppm to 30 ppm NOx. 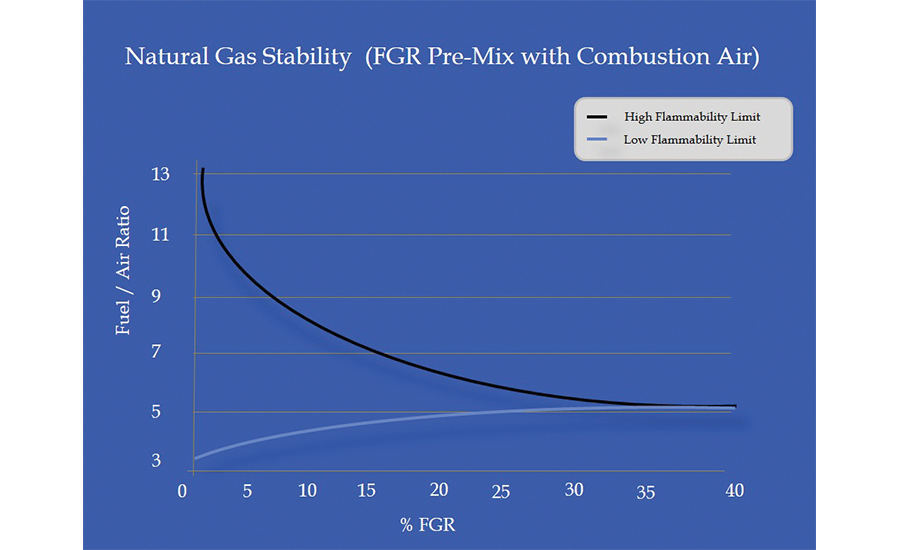 Further, some existing ultra-low NOx designs have limited burner turndown (~4:1 turndown) and are not conducive to rapidly changing boiler load requirements, such as in food processing industries where rapidly swinging boiler loads is often a must. That doesn’t mean it can’t be done, but it does mean close attention to burner and combustion controls design. FGR levels can sometimes exceed 25% to 35% on ultra-low NOx burners, not only significantly increasing boiler operating costs, but also bordering on flame stability and related burner/boiler pulsation issues when higher FGR levels require the burner to operate close to the limits of flammability.

While the use of steam or water injection in a burner flame can reduce thermal NOx by reducing the burner flame temperature, it is typically not used as a standalone method of reducing thermal NOx levels. None of the major industrial burner companies use it in the U.S. as a routine way of significantly reducing NOx on a packaged watertube boiler.

It can, however, be used on an installation where other low NOx technologies are close to but not achieving the desired NOx emission levels, perhaps as a band-aid solution. Typical thermal NOx reduction using steam or water injection can be as high as 20% to 25%. Challenges reported with its use include possible increased CO levels in addition to its high cost, sometimes increasing total fuel costs for this make-up by perhaps 5% or more. 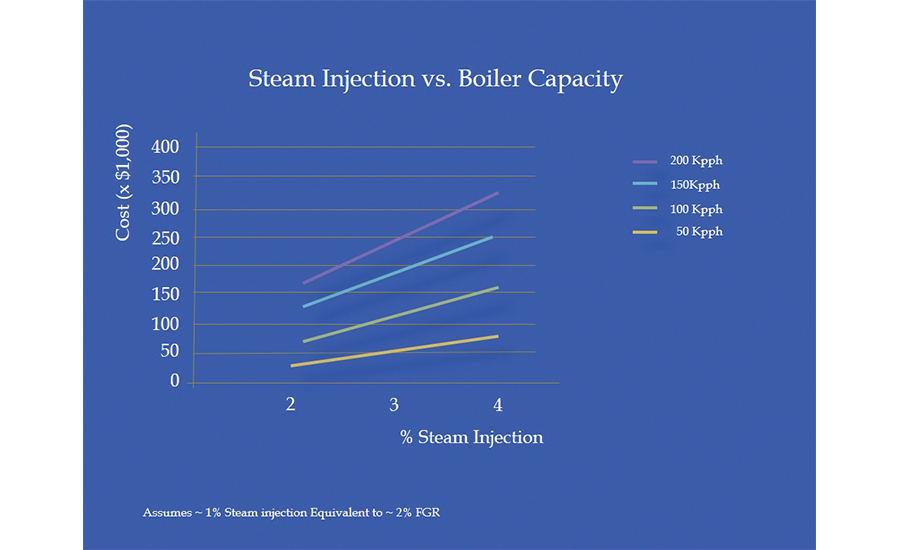 A word about SCR technology

Significant strides have been achieved in the use of SCR technology to reduce total NOx levels in a post-production process for watertube packaged boilers. This process, applied to the boiler outlet, uses a catalyst along with ammonia or urea injection to significantly lower NOx emissions without the need for ultra-low NOx burners. When used with traditional low NOx burners with or without FGR, NOx reduction with SCR’s using ammonia injection has been reported as high as ~95% with resulting NOx levels sometimes less than 5 ppm NOx. A CO catalyst can also be added with some SCR  designs to reduce CO levels.

John DeLacy serves as NTFB Combustion Equipment USA’s Director of Engineering/Chief Engineer. NTFB USA designs and supplies low NOx gas and oil packaged burner systems of all types, specializing in single- and multiple-burner fired watertube boilers and furnaces. He has served as Chair of the Burner Group for the American Boiler Manufacturers Association and as Technical Advisor for NFPA 85.

This article originally ran in the Fall 2017 edition of Today’s Boiler, the official publication of the American Boiler Manufacturers Association (www.abma.com), published twice yearly in collaboration with Engineered Systems.​