After selecting or investing in high-efficiency equipment, the last thing you want to do is give that savings away. Careful attention to sizing and piping can keep your system configured for success.

Owners, engineers, and contractors are increasingly understanding the advantages of designing new hydronic heating plants using high-efficiency condensing boilers. Condensing boilers offer significant efficiency improvements compared to traditional boilers. However, realizing these higher efficiencies in large plants requires extra design consideration. In this article, we will examine common pitfalls that cause seemingly well-designed condensing boiler plants to operate at lower than expected efficiency, and we will highlight best practices that will result in stable and efficient plant operation. 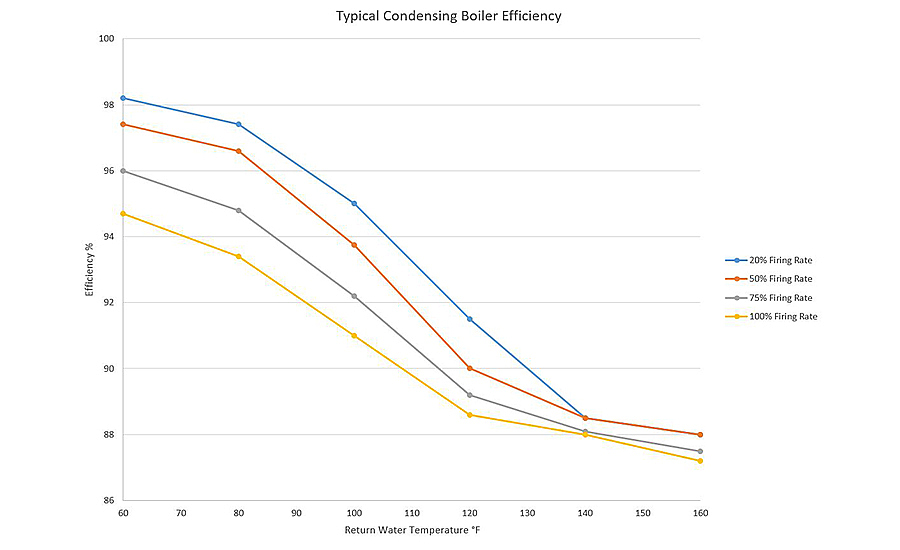 High-efficiency building envelopes, increased use of energy recovery, and lower VAV minimum airflow set points — driven by ever improving energy codes — are rapidly reducing building heating loads during shoulder months. Traditionally, boilers have been sized using design heating loads (without energy recovery), redundancy requirements, available floor space, and facilities design standards requiring sizing boilers to handle 130% of the heating load. Actual loads seen by the building’s heating plant are typically far lower, which will result in lower than expected efficiencies if care is not taken when selecting the size and quantity of boilers.

Modern condensing boilers with high mass and high volume allow for variable primary flow pumping schemes. Several leading manufacturers prominently display on their product literature that their condensing boilers do not have a minimum flow requirement. These statements should be interpreted to mean that temporary low or no-flow conditions will not damage the pressure vessel. It does not mean that one should not design a minimum water flow to the boiler. Instead, the statement should read: Low- or no-flow conditions will not damage the boiler; however, minimum flow rates are recommended to avoid high limit alarms and other operational issues. The minimum allowable flow is a function of the boiler turndown, boiler size, and manufacturer.

The author recommends installing bypass piping as shown in Figure 2 to allow for minimum flow through the boiler when building loads drop below the capacity that the boiler can provide at its minimum turndown. Under this condition, return water temperature entering the boiler will rise and boiler efficiency will suffer. Consider the following boiler plant:

The typical spring/summer/fall heating load falls within the 2,000-MBH boiler’s turndown range, allowing the boiler to run continuously and maintain a high efficiency. When the load falls below the 3,000 MBH boiler’s turndown range, the minimum flow requirement will force open the system bypass valve, which in turn increases the return water temperature seen by the boiler, reducing efficiency. The same situation will occur with the 6,000-MBH boiler with even larger reductions in efficiency. In addition, the owner may feel frustrated at paying a premium for condensing boilers that do not condense for large portions of the year.

Without the relatively large pressure drop through the boilers, small differences in pressure drop associated with the header, boiler inlet/outlet branches, valves, accessories, and the boilers themselves can result in each boiler receiving a different flow.

The largest issue with the 3,000- and 6,000-MBH boilers described above is the resulting boiler cycling. Figure 3 depicts steady state conditions. However, in reality, the return water temperature will continue to rise leading to a further drop in efficiency and eventually the boiler will turn off. Frequent cycling can dramatically reduce the boiler’s service life, and the cost of replacement will dwarf the savings associated with low-load efficiency differences in the three options presented above. The authors recommend using frequency of cycling as the primary design consideration when selecting the smallest boiler size in large plants. The reduced efficiency and cycling issues described above can be avoided through careful load calculation and by using the following sizing approach.

The author performed the analysis described above using the four combinations described in item 2 on a sample building with a 12,000-MBH design heating load. The (2) 6,000-MBH boiler plant option was quickly ruled out due to redundancy concerns. Typical spring/summer/fall loads are large enough that a minimum boiler sizing of 3,000 MBH would be acceptable from a cycling standpoint — a fairly significant efficiency drop is also observed for the (3) 4,000-MBH option. Based on the data in Table 1, the (4) 3,000-MBH option appears to be the clear winner.

The use of variable primary pumping in hydronic boiler systems creates challenges not typically seen in traditional boiler plants featuring primary-secondary pumping configurations and staged boilers/pumps. In traditional systems, boilers received their design flow rates at all times. Balancing flow through the boilers could be accomplished using oversized headers or reverse return piping due to the relatively high pressure drops through the boilers at design flow.

Furthermore, slight variations in flow through each boiler were acceptable and did not result in operational issues. Modern, variable-primary hot water systems vary the flow of hot water through the enabled boilers. Higher efficiencies at lower firing rates incentivize engineers and operators to run the boilers as close to their minimum flow set point as possible. Pressure drop through the boiler varies exponentially with respect to flow, resulting in extremely low pressure drops when operated at low firing rates.

Without the relatively large pressure drop through the boilers, small differences in pressure drop associated with the header, boiler inlet/outlet branches, valves, accessories, and the boilers themselves can result in each boiler receiving a different flow. The varying flow rates at low-load conditions can result in high-limit alarms. As a result, the operator will likely place the system into hand mode or increase the minimum flow set point on all of the boilers — each potential action leads to a decrease in heating plant efficiency.

The author recommends using a flow sensing device and modulating control valve for each boiler to ensure equal flow to each boiler is maintained. This approach has been shown to decrease high-limit alarms and allow the minimum flow set points to remain as low as possible leading to higher plant efficiency. The data attained from the flow sensing device can also be used to establish alarm limits and troubleshoot the system should an issue occur.

The old adage that “you can never have too much heat” still rings true, but by following the recommendations in this article, designers can avoid the potential issue of “having too much heat, but too little load.” The future of large central heating plants using condensing boilers looks bright, and by paying attention to the details, designers can ensure that the premium paid high-end boilers will be repaid with stable operation and significant energy savings.

The Design of a Steam Plant is not a Lost Art