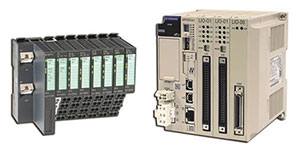 The Drives & Motion Division of Yaskawa America, Inc. has released three new motion control products. Each of the new devices is designed to improve the performance of automation systems, and to compound the improvement in system effectiveness when used in combination.

The MP3300iec machine controller is designed to make automated equipment more responsive by boosting both processing speed and memory capacity. In addition, MP3300iec has the ability to utilize MECHATROLINK-III motion network and take advantage of the new version’s improvements in cycle time and network connectivity.
The company claims its MotionWorks IEC version 3 software makes automation programming faster, easier, and more effective with features including support for PLCopen Part 4, a built-in cam editor, an HMI tagging tool, an enhanced logic analyzer, and other improvements.

The VIPA SLIO system is a remote I/O solution designed to make the addition of power and signal capability quicker and easier.

According to Yaskawa, the benefits of the machine controller, I/O system, and software package are further enhanced when MP3300, SLIO, and MotionWorks V3 are used in conjunction with one another. A capability built into the latest version of MotionWorks automatically configures VIPA SLIO modules that are added to the network, relieving programmers of the tedious task of manually entering a system’s I/O data into operating software. The processing speed of the MP3300iec is increased to nearly double the rate of the previous generation of processors, an improvement that is used to full advantage when paired with the added features built into the latest version of MotionWorks. The company says this results in an improvement of 50% to 100% in network speeds. In addition to functioning effectively under MECHATROLINK-III, MP3300 and SLIO were created to work with full efficiency on EtherNet/IP and Modbus TCP networks.