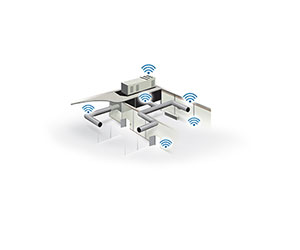 Many building owners face challenges connected to maintenance and repair with traditional wired building controls systems, which fail when wires are cut, disconnected, or damaged. Air-Fi can help optimize a building’s performance with less risk, thanks to self-repairing mesh technology that features redundant signal paths to help prevent communication failures. Trane offers a typical 200-ft indoor signal range, with up to four times the number of paths, extending up to a half-mile when unobstructed for even greater levels of signal reliability.

Air-Fi is a ZigBee® Certified Building Automation solution, and the system is built on a platform that supports BACnet® open standards. This allows customers to integrate devices in the future when the building expands or changes. Trane Air-Fi wireless also conforms to the IEEE 802.15.4 standard, so customers get a wireless BAS communication system that reliably coexists with other wireless systems, including Bluetooth® and Wi-Fi® — without interference. Trane officials said there is no security risk with Air-Fi, which uses a separate, secure network from those used by a building’s IT system. Air-Fi secures building automation networks by the use of AES-128 encryption, keys, and device authentication.