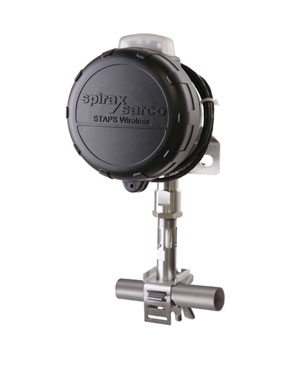 Spirax Sarco has released its new wireless steam trap monitoring system — STAPS Wireless. The system is designed to deliver accurate wireless monitoring and reporting of steam trap performance around the plant. According to the company, it is important for steam users to keep track of the performance of steam traps because leaking or blocked traps waste energy and water, where as a healthy steam trap population allows condensate to be removed from the steam system effectively which means it can be re-used. This helps contribute to reduced fuel costs, energy savings, and reduced water charges.

STAPS Wireless will allow steam users to install a solution that will deliver continuous, accurate monitoring, without the need to install cabling. The clamp-on design allows STAPS Wireless to be fitted in
areas which may have been previously unsuitable for monitoring equipment, for example in areas which may be too remote or awkward to install long lengths of cabling for power and data to be supplied and received. There is no need for the monitor to be checked manually, as the head unit uses 2.4 GHz wireless technology to communicate performance details automatically back to the central receiver, where the data can then be interrogated using purpose built STAPS software installed on the steam users PC.