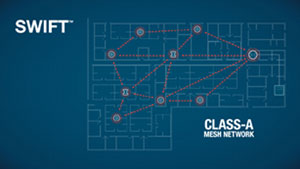 Using a Class A, mesh network where every device acts as a repeater with redundant path communication, SWIFT systems are described as self-healing, making them a reliable fire detection solution. Once a mesh network is formed, a restructuring automatically occurs to find the strongest paths within the network. Unique mesh IDs in each SWIFT network prevents miscommunication with other devices and inherent frequency hopping prevents system interference.

Honeywell officials said the elimination of wires leads to more flexibility in installation, reducing the cost of running wire through concrete walls/ceilings or areas where materials such as asbestos are a concern. Wireless technology also benefits the numerous installations where mounting detectors is extremely challenging.

SWIFT devices look and operate exactly the same as their wired analog/addressable counterparts. The SWIFT devices are UL listed in compliance with UL 268, UL 864, and part 15 of the Federal Communications Commission rules.

The initial launch of SWIFT devices will include photoelectric, photo/thermal, standard heat, and rate-of-rise heat detectors, plus a monitor module. A system can have any combination of up to 50 devices per wireless gateway, including the gateway itself and user interface driver. Spacing of SWIFT devices should follow NFPA guidelines for the application. In an average environment, SWIFT devices can be placed approximately 50 ft from the gateway and from each other. Various factors such as physical barriers and other radio transmissions can affect signal strength, therefore a site survey before installation is recommended. The SWIFT system offers a site survey procedure, which allows an installer to preview a site for wireless viability before a system is purchased.