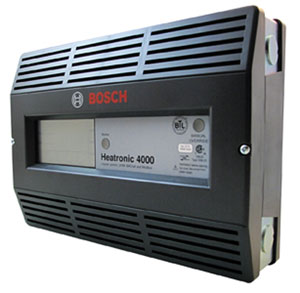 Specifically designed and configured with commercial and light industrial installers in mind, the control has a Bosch/Buderus boiler menu selector with the entire range of Bosch and Buderus condensing and non-condensing, stainless steel, cast iron, and cast aluminum commercial boilers with individual inputs from 215 to 5,443MBH. Using the boiler selector menu reduces programming time as well as set-up and start-up times for any application. Each boiler in the Menu Selector comes with 22 default pre-programmed parameters stored in memory. Parameters include fuel type (gas, oil), burner signal (single-stage, two-stage or modulating), boiler mass (low, med, high), low and high inputs in Btu, and a min-max modulation signal, to name a few.